I’ve crossed paths with a few celebrities over the years. I’ve spent time backstage with My Morning Jacket more than once. Sandra Bullock bought my ticket to get into the Whisky in the 90s. I spent an interesting evening with a couple of the men of Melrose Place years ago. Bon Jovi took up the entire smoking section of the restaurant where I worked in high school. Lindsay Wagner ordered take-out and wasn’t very nice and was tall. Bill from Bill and Ted’s Excellent Adventure also ordered take-out and was extremely nice and quite short. And once, as a cocktail waitress in Durango, I served Charlie Daniels the wrong drink three times before I knew who he was.

But I’ve never been overly awed by seeing someone famous in person. Each time it happens, it just reinforces that these are people, just like me. They just happen to be far more wealthy and significantly better looking.

The Sundance Film Festival is in full swing here in Park City, Utah. The stars come out this week, to be sure. A simple stroll down Main Street is likely to find you saying, “Sorry!” as you bump into someone and then realizing it was the guy who starred in the movie you watched last night. In past years, I’ve randomly caught glimpses of people like Teri Hatcher and Phillip Seymour Hoffman. My dear friend, Vanessa, is visiting from Chicago. As soon as we picked her up from the airport, we were in the zone– happy hour straight into our first Sundance film, a collection of documentary shorts. 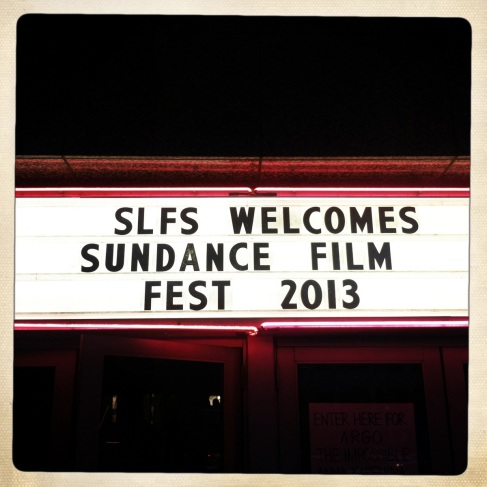 The next day, the sky was blue and we had a full day ahead before our next movie time. We thought we’d spend some time checking out The Scene. But before we left, I quizzed Vanessa and John on which celebrities they’d like to “bump into” on Main Street. John’s daydream was running into the pretty girls (shocker): Heather Graham, Reese Witherspoon, Megan Fox. He also thought it would be awesome to see Daniel Day Lewis. (I agreed!) Vanessa had a hard time narrowing down the celebs she’d stalk if she could, particularly the cute boys: James Marsden, Jeremy Renner, Christian Bale, Justin Timberlake. Ladies she’d be in awe of were Naomi Watts, Jessica Chastain, and Cameron Diaz.

As for me, I think Emma Stone seems like a fun person to know. I can’t deny my fascination with Zooey Deschanel and would love to sip whiskey with Reese Witherspoon. As for the boys? A Robert Downey, Jr. sighting would likely result in me going to jail for something.  If I spied Johnny Depp, Amanda would probably faint, even though she’s all the way in California. I knew Dave Grohl was in town- that would be a very cool run-in. And it would be dreamy to spot my favorite celeb crush: Mark Ruffalo. Preferably the version that rides a motorcycle, runs an organic farm, and owns a restaurant. 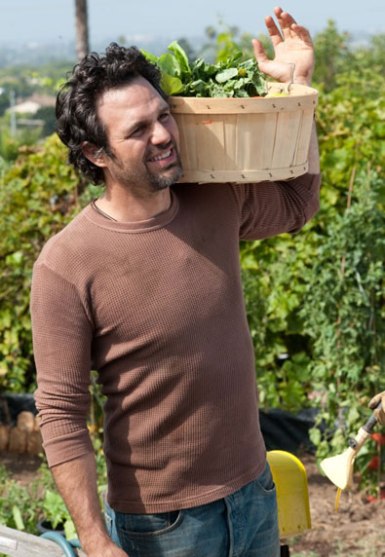 Vanessa and I drank brunch (that is not a typo) before hopping on the shuttle into the madness. For a local like me, it’s always interesting/weird to see a restaurant you frequent suddenly named something else, or a space that was an art gallery last week now serving martinis and wine as a bar. Main Street was packed with people, many wearing brand new Sorrels and a LOT of faux fur accessories (sure signs of out-of-towners). There’s a moment where you realize that plenty of famous people are probably all around you, but out of context or bundled up in Utah-appropriate clothing, you don’t recognize them. Suddenly, you scan every face for recognition. Is that guy someone famous? Why does she look familiar? That HAS to be SOMEONE…why else would he be wearing THAT? 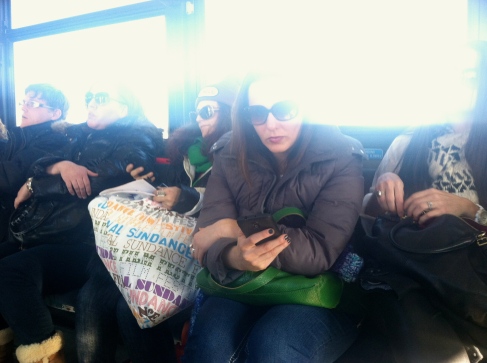 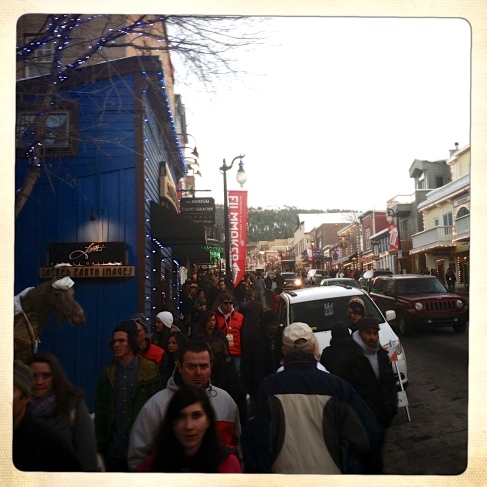 My wedding coordinator, Melissa, let me know that she was hosting Nikki Beach parties all week and put us on the list. We started there, on the rooftop of the Sky Lodge near the bottom of Main Street. As we entered the lobby, we spied Bill Pullman lounging on the couch. Our first celebrity sighting was behind us! Upstairs, a handsome DJ was spinning dance music (loudly). Beautiful people were relaxing on white leather couches, sipping Veuve Cliquot. We shared an area with the owner of all Nikki Beach clubs on one side and the Stella Artois girls on the other. Pink bubbly in hand, we laughed and enjoyed possibly the best people-watching EVER.

A couple of times, the music would change and two men with sparklers ablaze would swoop in with a bottle of champagne for someone. At one point, two beautiful blonde girls and a guy with some serious abs cruised through the party in bathing suits, heading toward a hot tub overlooking Main Street. A saxophone player strolled through the party, playing along with whatever Top 40 dance hit was pumping through the speakers. There was a lot of energy. Some Prada and Louis Vitton. A lot of makeup. A lot of bubbly. And many, many iPhones, snapping and sharing photos on Facebook faster than you could say “papparazi.”

We were guilty of that. I confess. 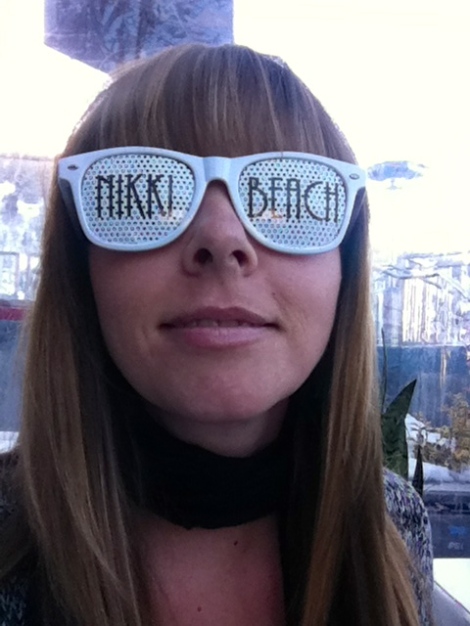 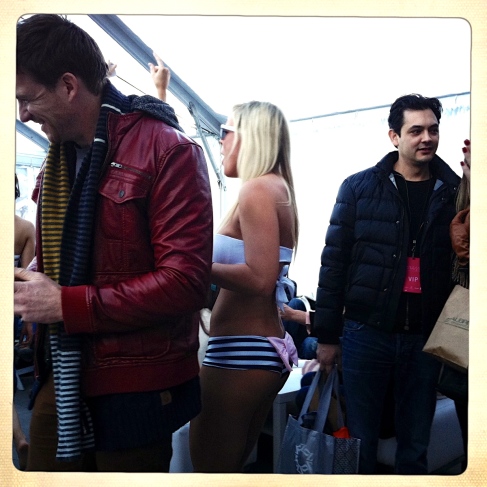 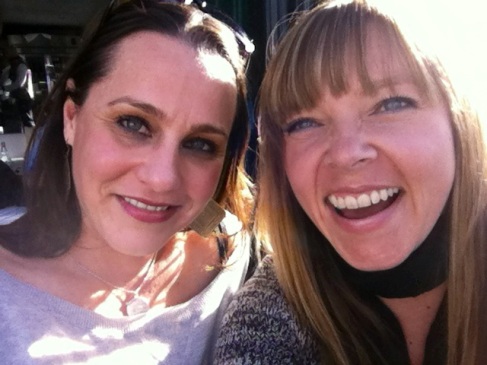 At one point, I decided to check out the other side of the patio where people seemed to be gathered around a fire pit. There was an MTV News interview going on. And there he was, Joseph Gordon Levitt… sitting next to Tony Danza. 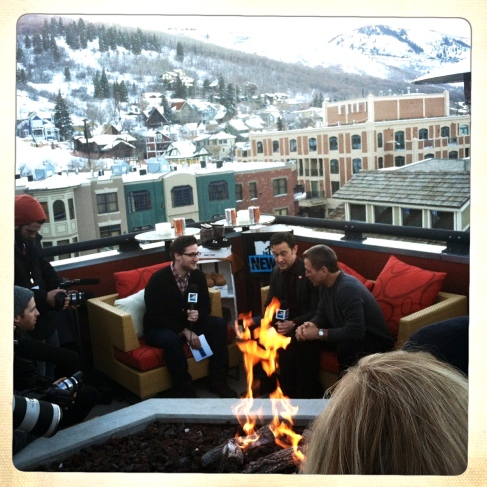 In fact, it wasn’t until I showed Vanessa the photo that she pointed him out! Ooops. After a few “Who’s the Boss?” jokes and giggles, we watched the interview for a bit and then Joseph Gordon Levitt strolled past our table and out of the hotel. More celeb sighting success- and a double-whammy. Tony Danza totally counts.

The sun was fading and the party was intensifying. It seemed like a fun place to stick around for the night, but we wanted to stroll Main Street more before heading home. We had a meal prepared by John and a late-night film ahead of us! We thanked Melissa and high-fived the security guard on the way out. (Really.) The pumping bass of the music behind us, we boarded the small elevator with a handful of people. The last guy to enter had on stylish Rayban glasses. I was thinking I’d have to make a joke to Vanessa about people from LA wearing shades indoors when I realized who he was. I gave Vanessa a meaningful look and she turned to see that we were, indeed, sharing a teensy elevator with James Franco.

Guys, he wasn’t on our celeb-stalk lists. But HE SHOULD HAVE BEEN.

We all had a moment of confusion where we got out of the elevator on the wrong floor and all had to pile back into it to head down to street level. Here we were, bumping into James Franco, giggling with him about being lost in the hotel. And then he strolled out onto Main Street, piling into an SUV with tinted windows with his little entourage. Vanessa and I had many minutes of OMG! What just happened?! It was the closest to feeling star-struck as I had ever been, maybe because Mr. Franco wears Raybans so well or maybe because we were sharing an odd moment in close proximity. Or maybe because he looks like this: 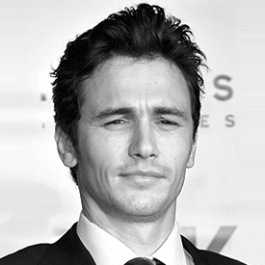 I felt a little sad not to have asked for a photo. Vanessa and I walked up Main, half-heartedly scanning the crowd for other famous faces. The lovely Keri Russell walked ahead of us for a block or so, stopping for fans once or twice. To be honest, Felicity was kind of an ‘aside’ after James Franco.

We popped into The Spur for one last cocktail before finding the shuttle stop. We heard later that we had missed Matthew McConaughey, Joe Pesci, Jane Lynch, Rebecca De Mornay, Paul Mitchell…various stars had dropped by the rooftop party. We hopped back on the shuttle, content with our own little celebrity sightings and laughing about our day. We didn’t see anyone on our dream lists of celebrity sightings, but we saw a few famous faces and had an absolute blast. Which is a better story- not noticing Tony Danza or moving over to make room for James Franco in the elevator?

John worked his magic in the kitchen for us, making his spicy arrabiata pasta with shrimp for dinner. We finished up just in time to make it to our 11:30PM movie (which I wished we’d missed). 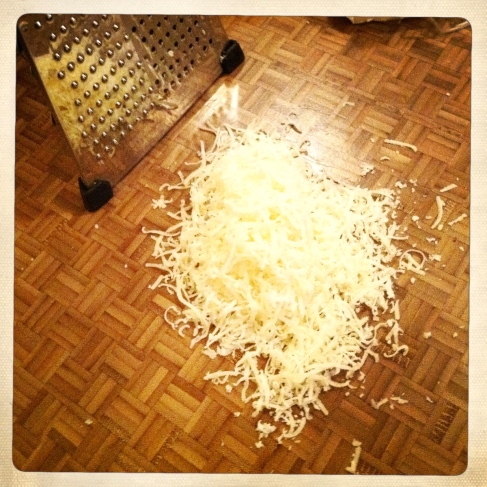 Before we hugged each other goodnight, Vanessa and I commented on the crazy, random day we’d had. We laughed about everything, including these characters from the shuttle stop.

Remember when I talked about making new memories with an old friend?
Mission accomplished.

And that was only Day One.

*celeb photos pulled from google images. except the ones of tony danza.*