Big news! In a possible moment of quarantine-fueled insanity, we decided to add another member to our family circus. Meet Quincy!

His full name is Quincy Delight the Hedgehog Dog. We’d been wanting to get another dog ever since we moved into this house, with its big fenced yard. Cholula needed a friend to romp around with and keep her active. When a friend of mine fostered a mama dog with her new litter of puppies, rescued from the Navajo Reservation, those wheels in my quarantined brain started turning. We are home all the time right now anyway, right? What better time to bring home a puppy? The boys will love it! They can help with puppy duty! It will be good for Cholula! Before I’d even chatted with John about it, we had a meeting set up to see the pups. When I do things like this, my mom says, “You must like to be busy.” Hmmmm.

We still joke about the day we brought tiny Cholula home. We’d seen the ad in the paper for German Shepard/Lab mix puppies. We’ll just meet one, we said to each other, and see how we feel. No commitment. The woman never even turned off her vehicle at the gas station where we arranged to “just meet” this puppy. One sniff of Cholula’s puppy breath and we were goners. So for me to tell John, “We can just go meet them…” was translation for “Let’s go get our new dog!” And he knew it.

The rescue pups weren’t ready to leave their mama just yet. The litter had every color, proof of mutt-ness! One puppy had a mottled brindle coat, one was white, a couple looked similar to a Rottweiler’s black and brown coloring, one was tan and white, and one was a little bit of all of those. Queen Cholula is better behaved with boy dogs, so we were only interested in a male puppy. There were only two boys in the litter, and one was spoken for, so the decision of which puppy to choose was made for us already.  Luckily, the remaining male- the one with a little bit of every color in the litter- was sweet and active and the favorite of my fostering friend’s family. We rolled around with the puppy party for a while, and then they started to get sleepy and piled onto each other to nap. When John and I left, we both knew we were moving into New Dog Preparation Phase. 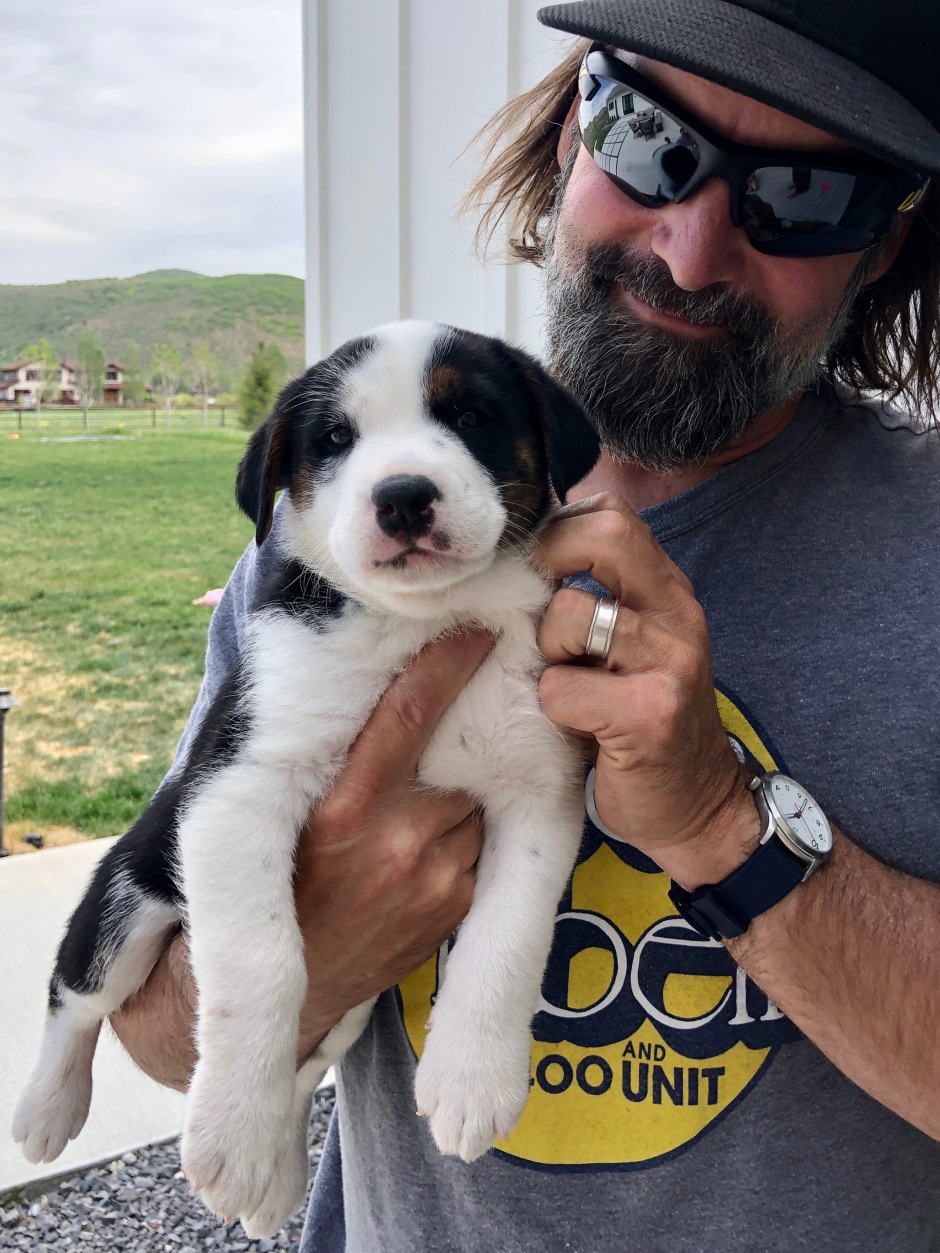 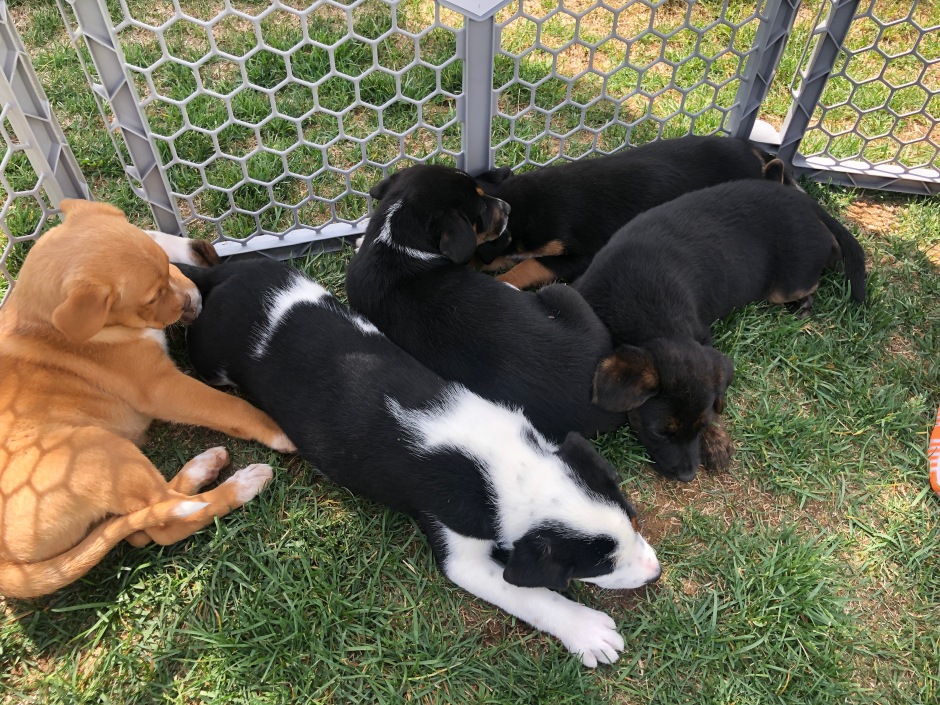 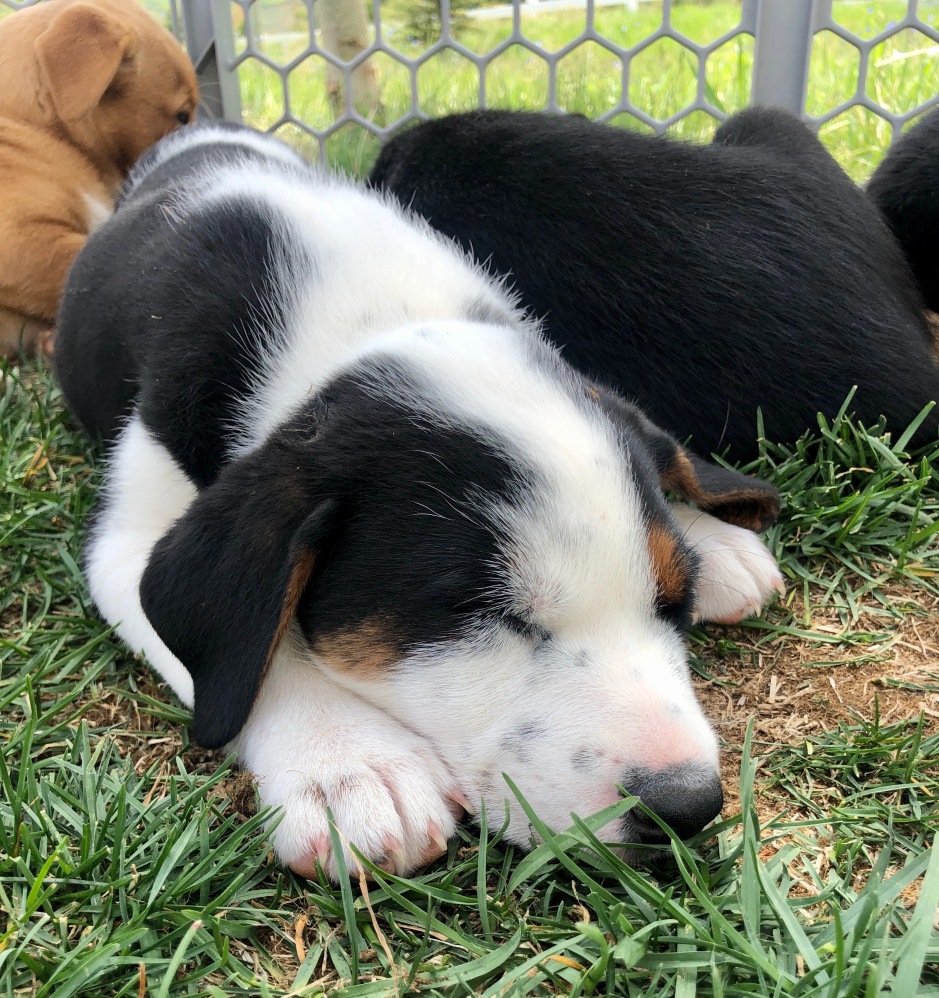 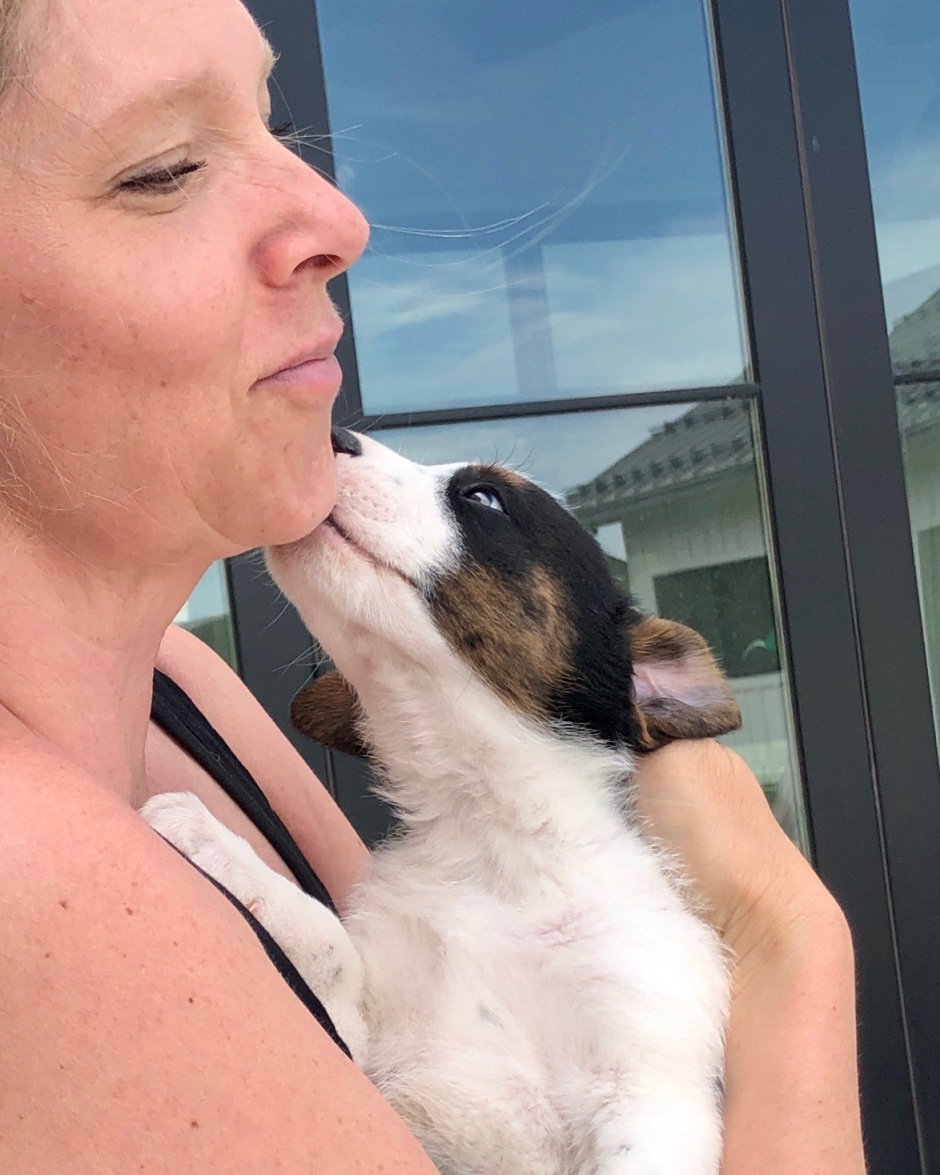 Before our new fella moved in, we brought Oden to my friend’s house to meet him and play with the pups. We’d revisited some of the names on Morrison’s baby name list and had generally settled on Quincy (after the incredible musician/producer Quincy Jones). Oden added the “Hedgehog Dog” part for an unknown reason that made sense to him. Who could argue with that face?

Well, a couple of weeks later, after Mama Dog decided to stop nursing the puppies and another round of shots from the vet, I stopped by Petco for some supplies and drove out to the Nuzzles and Co. Rescue Ranch to bring our sweet Quincy D home.  I set up a little cozy bed in the passenger’s seat for him, but it took about one minute before he curled up in my lap and snoozed there for the ride home. He was barely 9 weeks old. 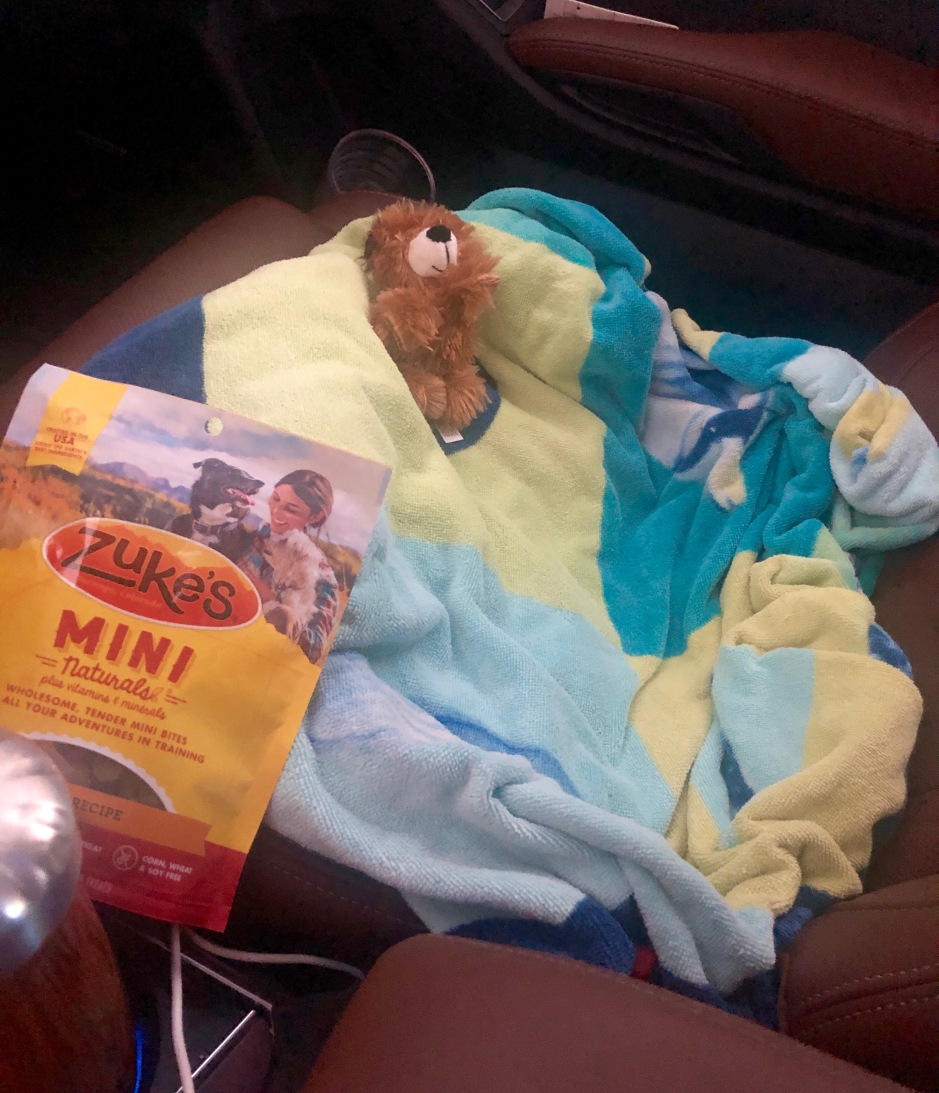 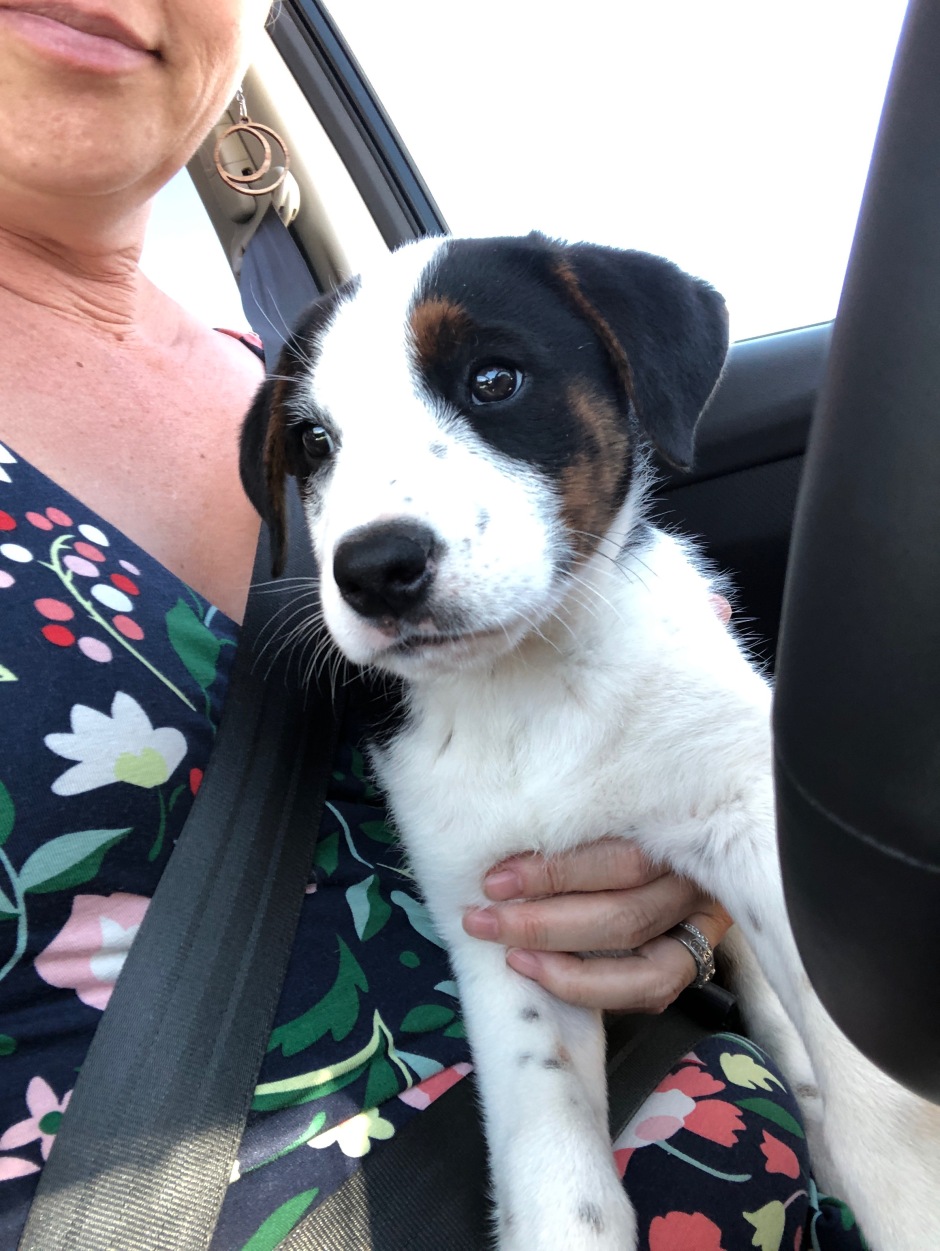 You can probably imagine that the boys fell in love with Quincy and there was a lot of squealing and snuggling involved with his homecoming. That’s true, but his entry into our family wasn’t quite that simple. First, I sort of forgot how hard it is to have a tiny puppy in the house. It’s like having a newborn! He couldn’t get up the stairs. His teeth were super sharp. Cholula was less than thrilled with this squiggly little beast, making sure that he knew that she was in charge. We tried to get him to sleep in his crate for a couple of nights, but his crying was too heartbreaking to hear, so he ended up in bed with us. There were the usual potty accidents, of course. We also happened to start a massive kitchen renovation that disrupted all of our routines for most of the summer, which made it hard to maintain any consistency with a puppy. The timing was probably less than ideal to bring a new life into the mix! 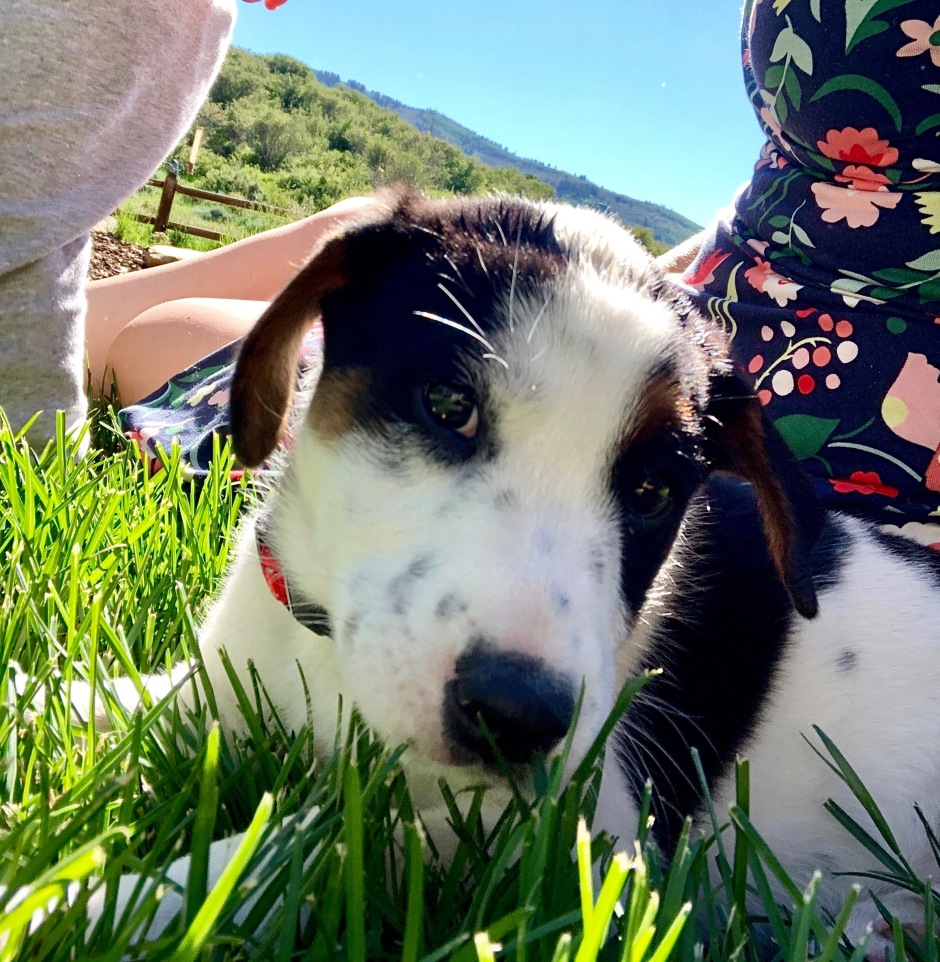 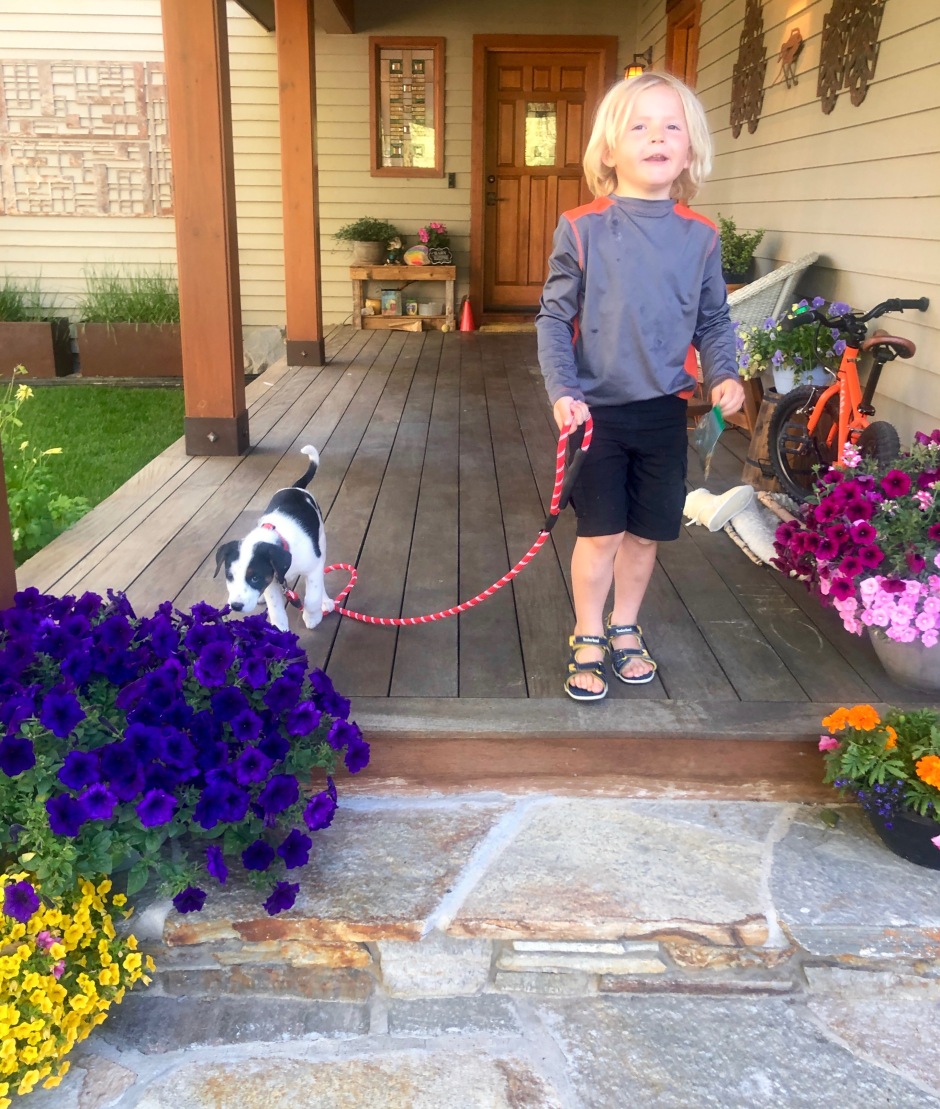 But the kicker? Quincy is what we affectionately call a “trash dog.” Maybe it’s due to his beginnings as a stray on the reservation with 5 siblings and a scrappy mom, but this dog is a canine trash compactor. A garbage disposal. He hardly chews his food, gulping it down like it’s The Last Supper. He swallows treats whole. BUT he doesn’t stop with food. He tries to consume everything! Less than a week at home with us, our poor tiny puppy was throwing up one night and all through the next morning, so we called the vet. Fast forward to Xrays and an ultrasound and we discovered that he had swallowed part of a supposedly “indestructible” puppy chew toy with some kind of string attached. It got stuck in his tummy. He had to have emergency surgery! He spent multiple days at an advanced medical care vet in Salt Lake City and there were moments when we didn’t know if he’d make it home. Here we’d tried to give his small beast a good life, and this was happening? Mama guilt applies to dogs, too. 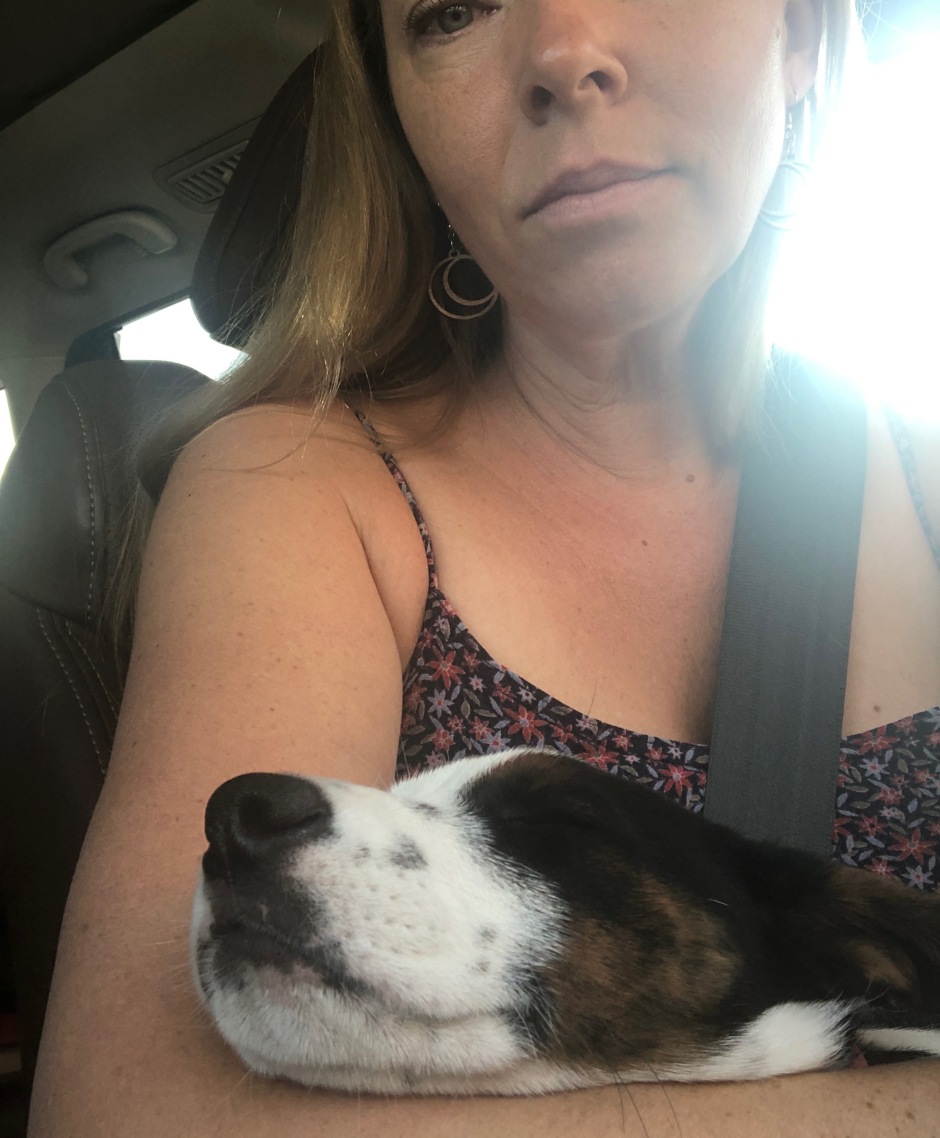 The good news is that Quincy pulled through, recuperated, and is now a happy and rambunctious member of our family. He’s the most expensive rescue dog around, with a big scar on his belly to prove it! We think he may not be the sharpest tool in the shed, and his constantly-wagging tail is somewhat lethal, but he’s such a sweetie. He and Cholula aren’t quite BFFs yet, but they are finally buddies. They zoom around the yard together. They hike alongside each other. They both sleep on the bed (sigh). Quincy still earns the name “trash dog” by stealing various things to chew up, but so far, he hasn’t eaten anything to land him back at the vet. I’m blaming it on teething and calling it a win! 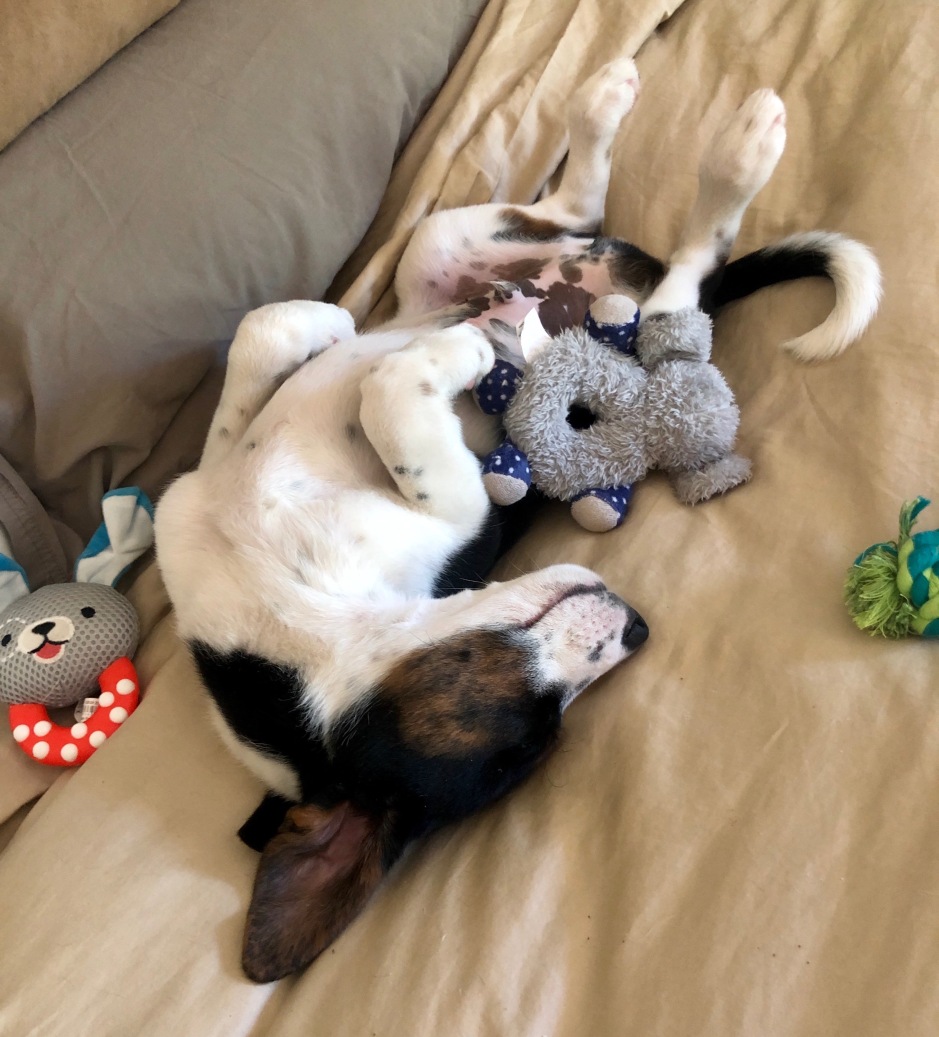 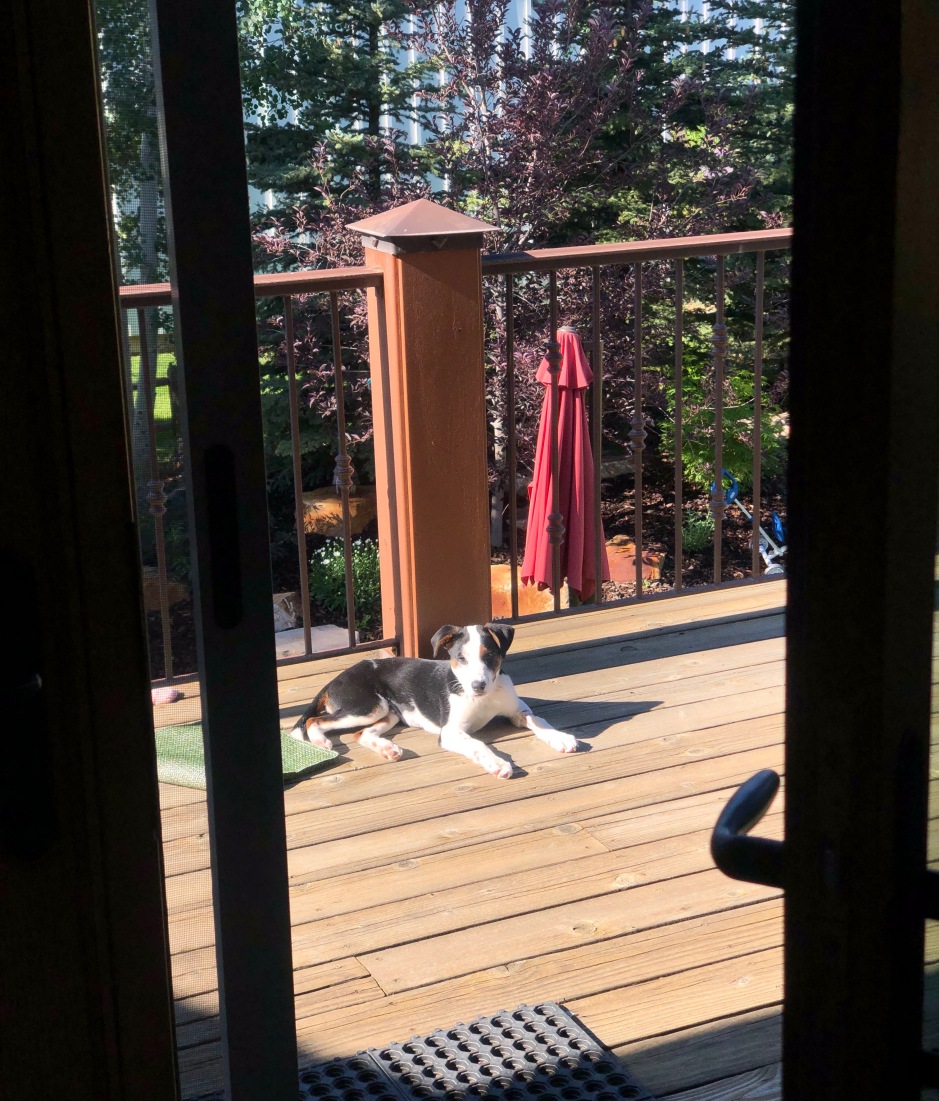 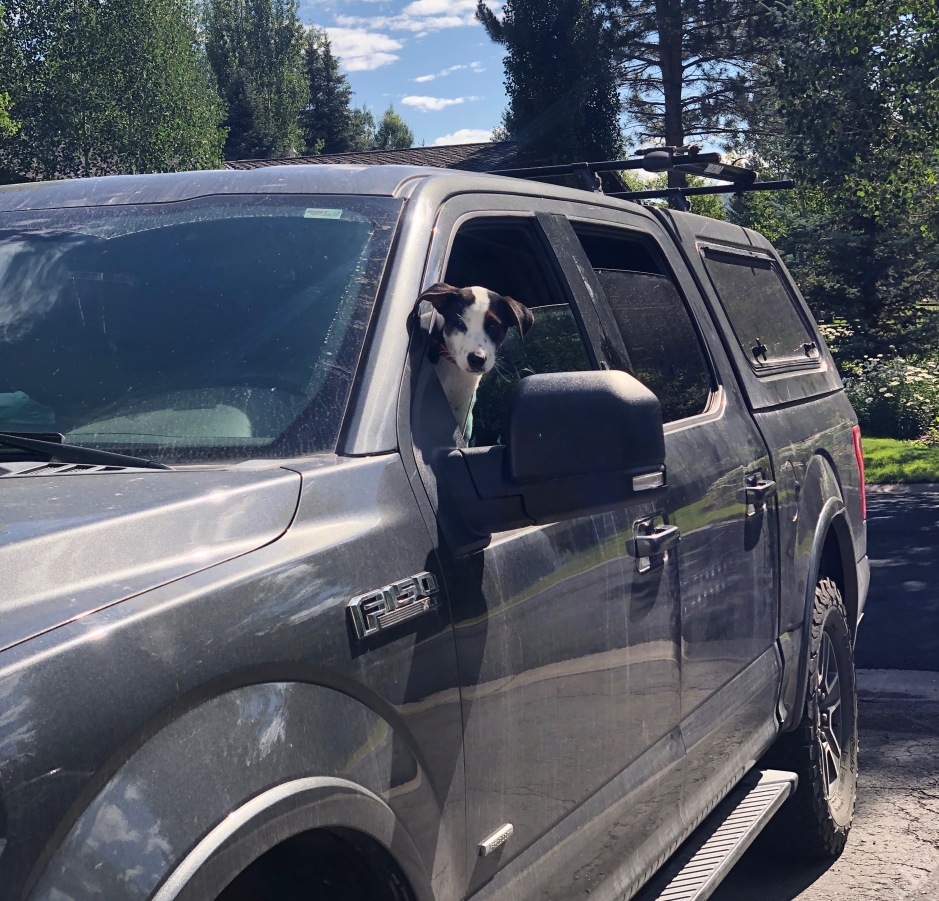 With our kitchen renovation winding down, life just might have something resembling a routine soon, albeit different than it used to be. We are a two-kid, two-dog household and the chaos quotient is HIGH! Our “puppy” is already 5 months old. The important thing is that Quincy knows we are his family and safe place, and we are so happy he’s with us! 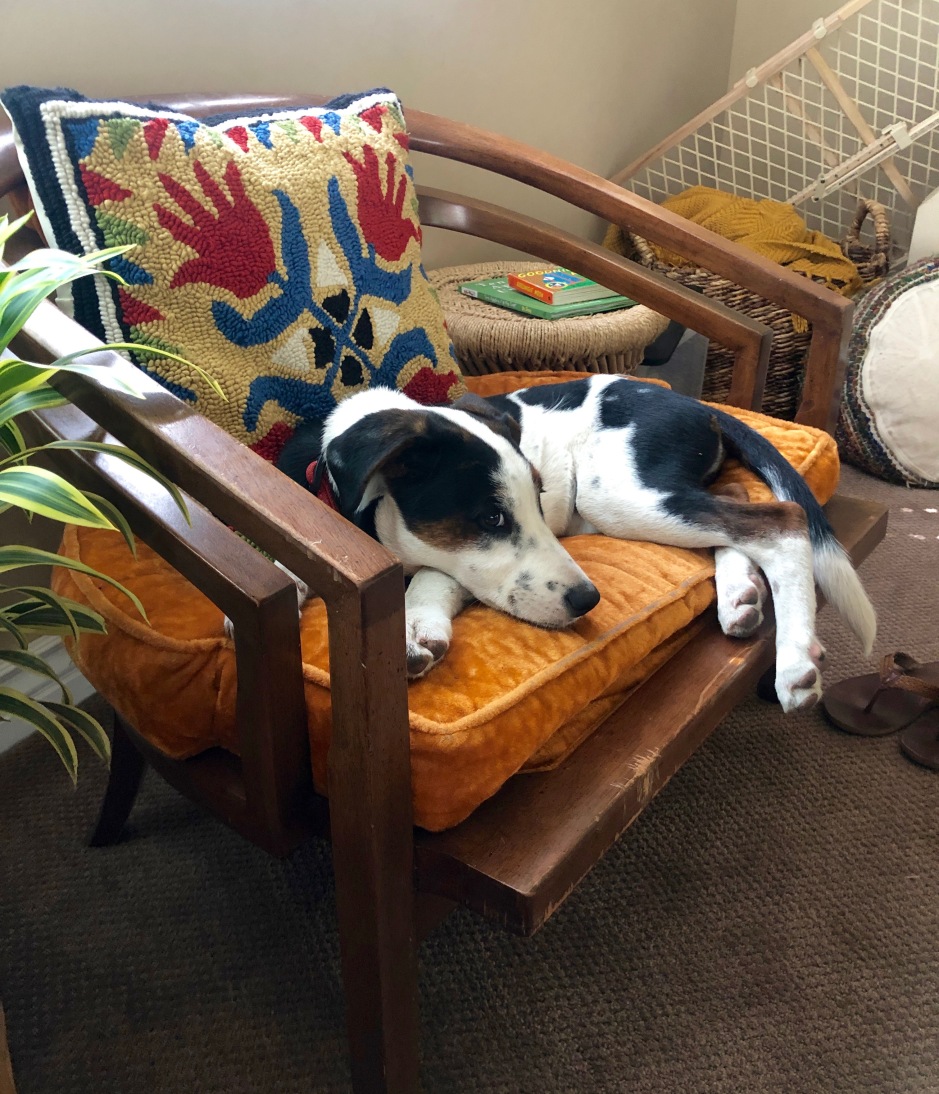 What about you? What crazy “impulse buy” decision have you made during quarantine?