It started out great. John wanted to show me some of his favorite newly-discovered biking trails nearby, and I wanted to get some exercise and tire out our crazy dog. So we headed into Summit Park, the alpine-y neighborhood across the highway from our house.

The winding road to the trailhead led us through cabins tucked into the pine trees. It was shaded enough to be nice and cool, and there was no one in the tiny parking lot when we arrived. 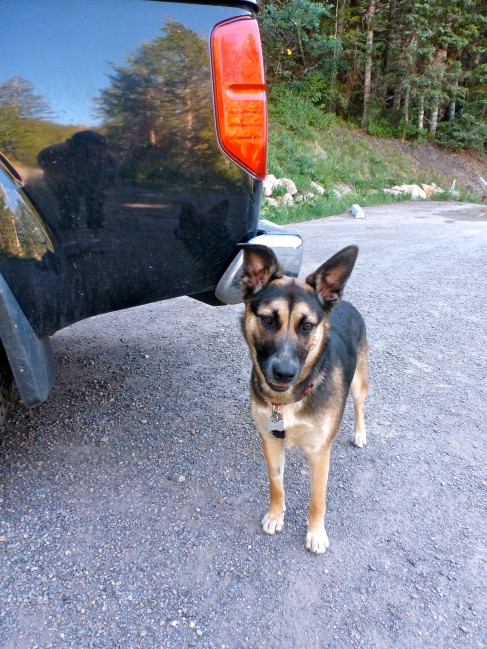 As John grabbed his water bottle and I grabbed some Cholula treats, an older-model Subaru wagon pulled up. Two concerned people asked us if we’d seen a white dog running loose, a pointer named Petey. We told them we’d keep an eye out for their lost dog and they drove off to continue looking. I said something to Cholula like, “Don’t ever do that to me.” And off we went to explore the trail.

It started off steep, which felt good in my legs and lungs. The lush vegetation and big pine trees made me feel like I was much further away from home than I actually was. I did my thing, spotting busy bees on lovely blossoms and snapping photos of the start of this little adventure. 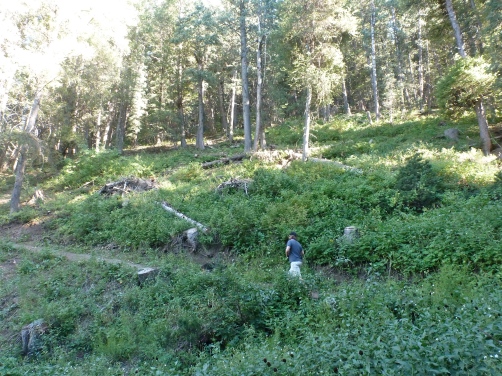 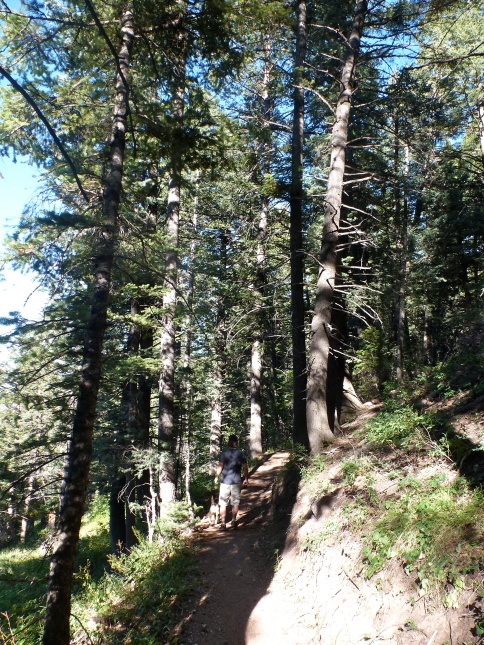 There came a point where we turned off of a dirt road onto a smaller trail, and that’s when we let Cholula off of her leash. Being part German Shepherd, she’s pretty good about blazing the trail… and then coming back to check on us both before exploring ahead again. She’s a little herder.

And then the squirrel showed up.

There was really no hope. Doggie instincts kicked in and off she went, bounding over fallen trees and through the shrubbery to chase down her prey. All she really did was make the squirrel mad, which was evidenced by the continual squirrel squeak it shouted down at Cholula from a tree trunk.

I stayed put as John attempted to call Cholula off of the squirrel, using different tones in his voice (forceful, playful, desperate). None were working, and apparently Mr. Squirrel had friends. Cholula was a free beast in the forest, moving further away from the trail after moving, squeaking chew-toys. I waited for John to return to the trail, taking this “love” photo and listening to the ruckus move further away. Hmmm. 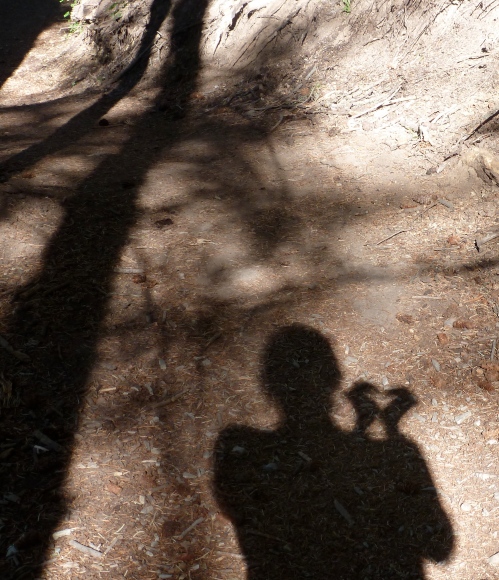 All of a sudden, a whimpering streak of white came quickly wagging toward me from the trail below. A sweet thing, the dog was, in fact, Petey- the lost pointer we’d learned about before we started hiking. He seemed relieved to be with a human, clearly knowing he wasn’t where he was supposed to be. His tail was a weapon, whacking my shins with each wag, and I thought about the wine glass destruction he’d bring at our house. As I clung to Petey’s collar, John came down the trail toward me, Cholula in tow on her leash. Apparently, Petey’s arrival was the only thing that could distract Cholula from the squirrel extravaganza.

We headed back down the trail, each clinging to a dog we didn’t want to let loose for different reasons. We called to Petey’s family and they met us at the bottom of the trail. It turns out that Sweet Pete had recently had some cancerous growths removed, had a thick line of significant stitches, was not himself due to sedation, and was needing medication. We were in the right place at the right time.

Feeling a little over-adventured, we packed up and headed home. I put together a Chinese chicken salad for our dinner, (and ALMOST remembered to take a photo of it before I dug in).

Cholula took a long nap, tired out from the chase. At first, I was disappointed that the hike was cut short. But if we hadn’t been delayed by our own naughty dog, we wouldn’t have been there for Petey. And he needed to be found. Sometimes things work out the way they should, even if it wasn’t what was planned.

Our “almost” hike was pretty incredible, after all.