Wow. Before I dive into a recap of our “December to Remember” list (2 months later), I want to thank friends and readers I don’t even know for reaching out via comments here and on Facebook, sending private messages, and sending texts after my last post. It wasn’t easy to write and it’s never fun to admit publicly that I don’t have it all figured out, and the kindness I received in response really made me feel loved. So thank you.

Now, though we have been struggling lately, I tried extra hard to make this Christmas season special and memorable for Oden (which makes it special and memorable for his parents, too). We had a ton of fun crossing things off of our “December to Remember” bucket list, only truly missing one item: seeing Santa come down Park City’s town ski lift. We were getting over being sick and it was extra cold that night, so we hunkered down at home, instead. We’ll check it out next year. I intended to have full posts about a few more of our experiences, but since it’s already past Valentine’s Day, I’ll condense my recap for you. Take a peek at what we did this year!

Watch Christmas movies. We tried Rudolph, Charlie Brown’s Christmas, as well as a few other classics (that I adore). Oden was marginally interested in those, but I have to say, “How the Grinch Stole Christmas” was an absolute hit. We watched it daily, literally, and even went to a movie event at our local library to watch it with other kiddos. (A real “Grinch” showed up to chat with the kids and take photos with them, but Oden was NOT having it!) My favorite thing is that when the Whos hold hands and sing around the big tree in Whoville, Oden reaches out to hold our hands. I think we watched our last Grinch well into January.

Visit the tree farm. I shared our Christmas tree hunt already as a full post HERE. We picked out a sweet little tree that we named Merlin and Oden got to have his first sips of hot cocoa. Mini marshmallows for the win! 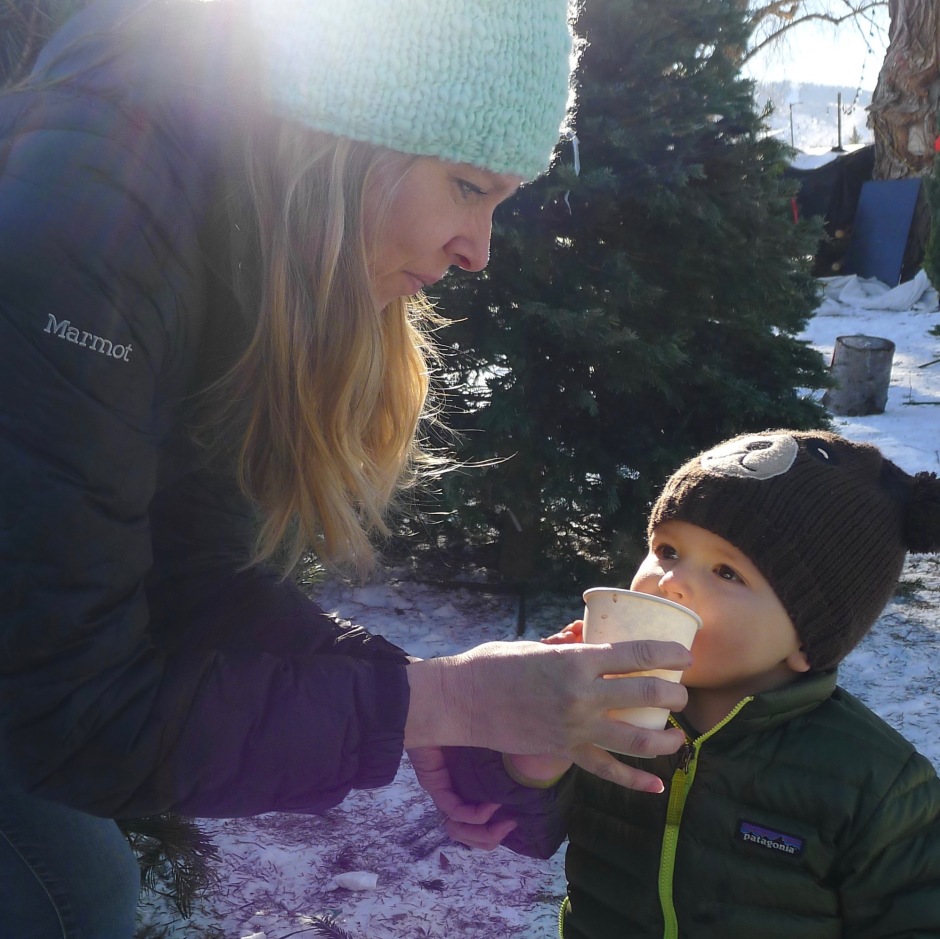 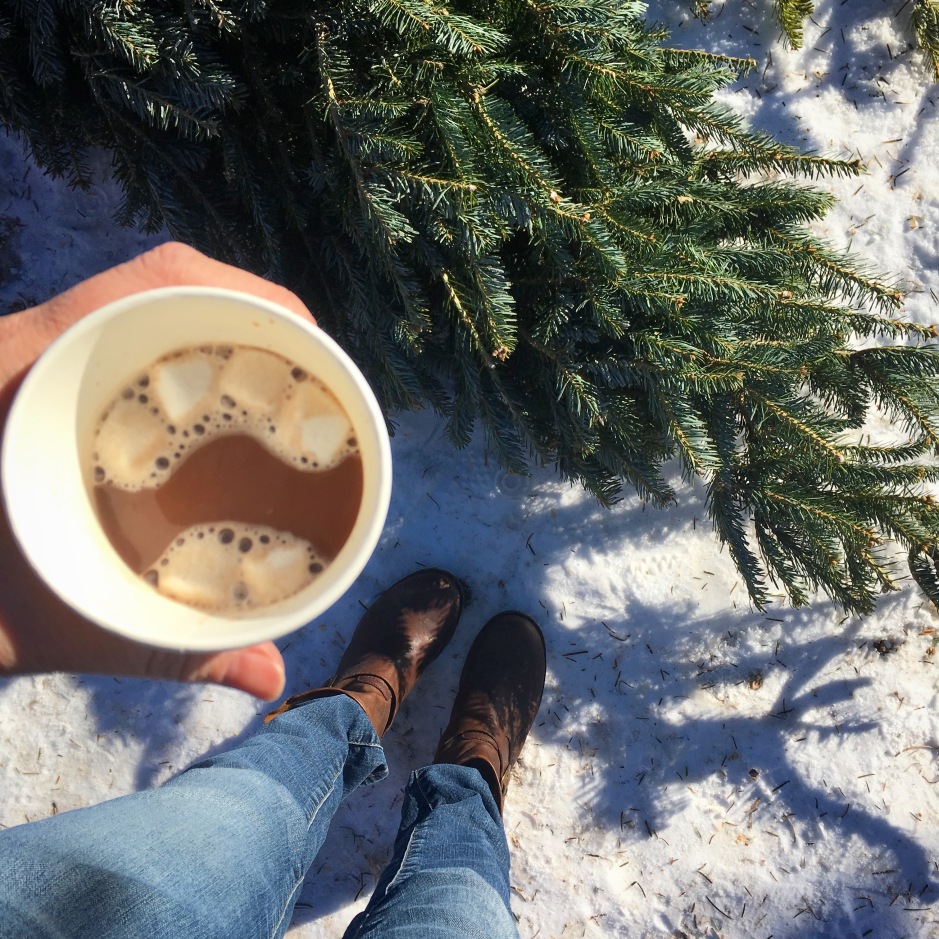 Make homemade ornaments. This was a project I really wanted to do and got started early. It took all month to really complete the ornaments because we had so much going on! I let Oden help me whenever it made sense and John joined in for a fun family afternoon. The salt dough ornaments turned out to be really sweet and precious memories, and I think I’ll try to do a small batch each year for gifts and nostalgia! 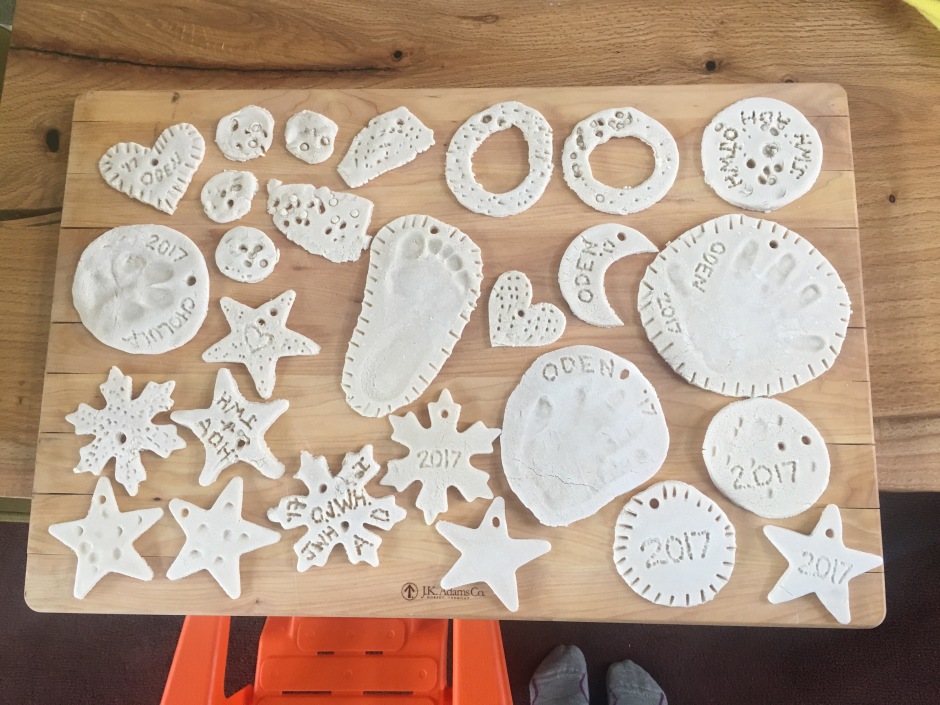 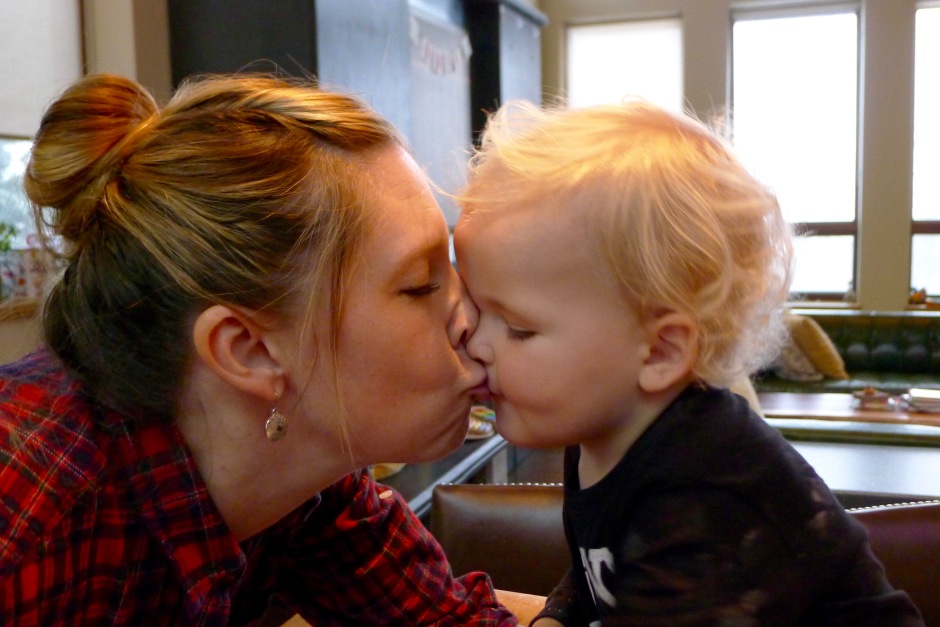 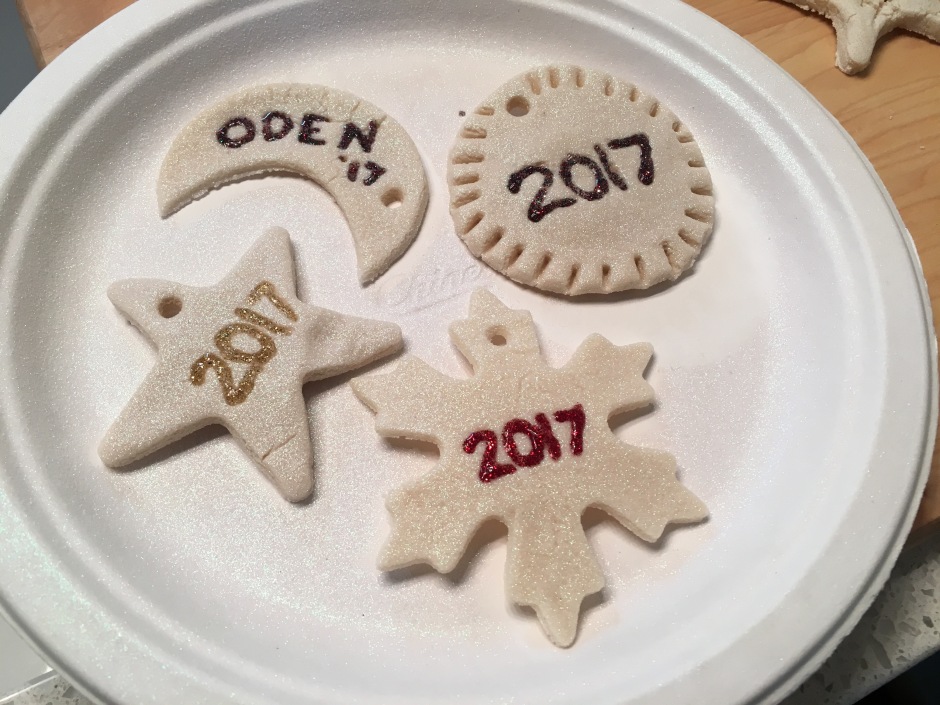 Decorate cookies. This was special to me because we used my beloved Grandma’s sugar cookie dough recipe. I set up a little area with red, green, and white frosting and multiple topping options. Oden is at a sweetly independent stage where he really enjoys watching us do something and then trying it himself. The cookies were beautiful and so delicious! (Santa thought so!) 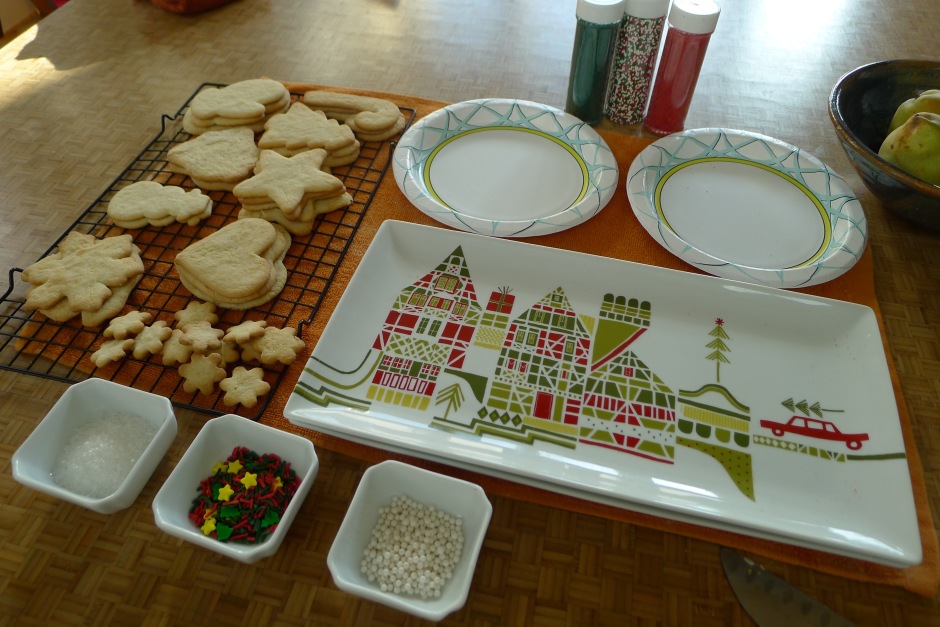 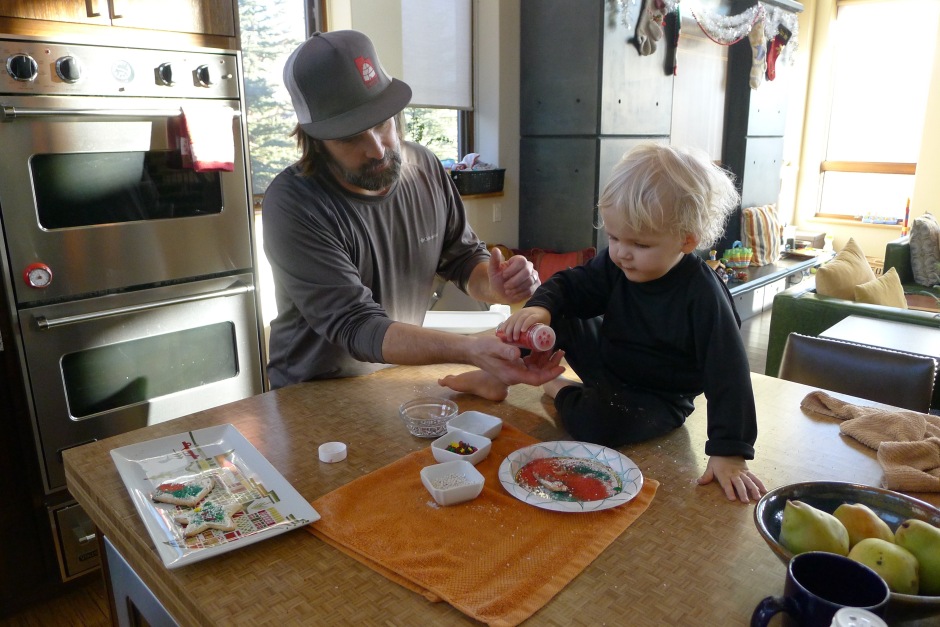 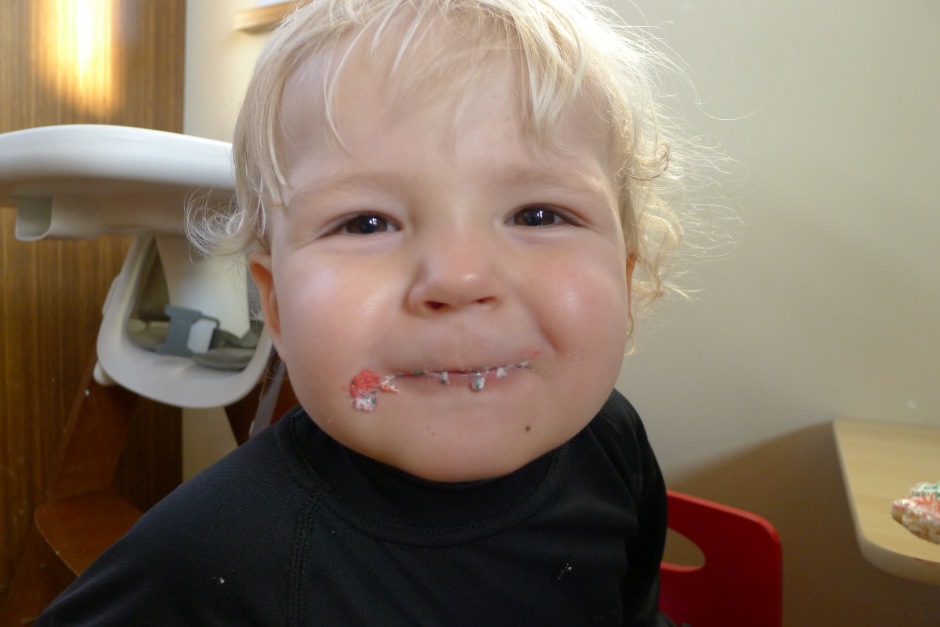 Photo with Santa. A tip from a good friend told me that Santa would be coming to the country club in our new neighborhood and we could actually book a time to get photos with him. I jumped at the chance to miss the 2-hour line (having flashbacks of our first attempt last year). Oden enjoyed strolling up the walkway, chatting with the cute elf, and even high-fiving Santa. It wasn’t until I plopped him down on Santa’s lap that the freak-out began. I’m told that the photos are “Christmas gold” but I hope Oden learns to realize that Santa is on his side! 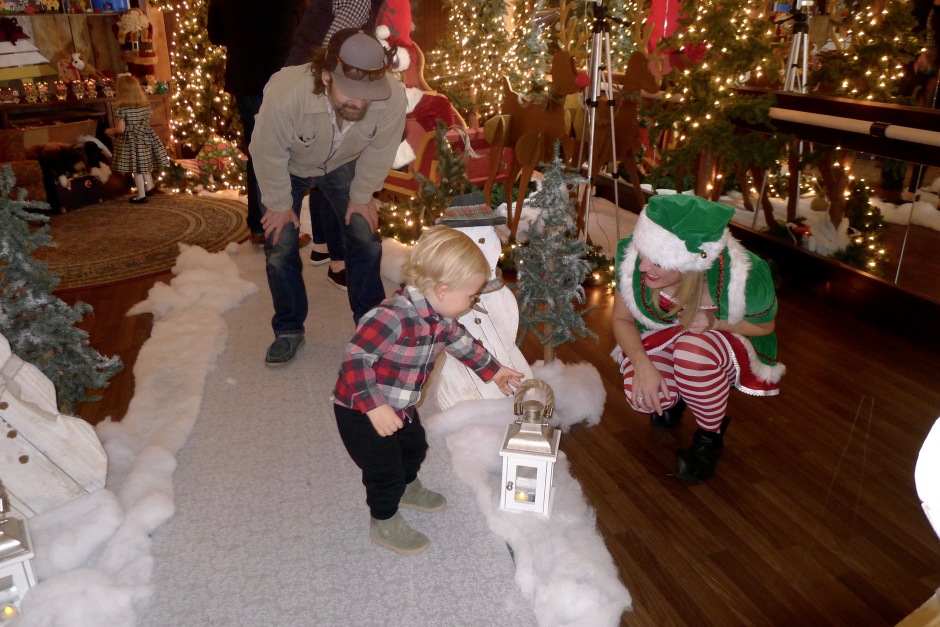 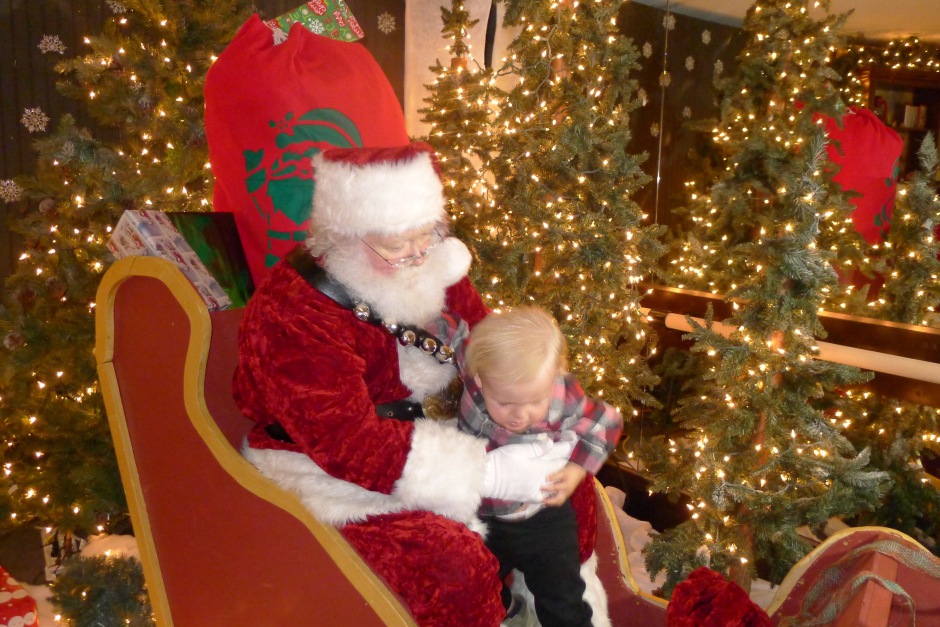 Build a snowman. I confess this one was a tad forced. We had new snow on Christmas and I tried my best to explain a snowman to Oden, but all he wanted to do was munch on the snow! Plus, the only carrots I had were the mini ones, so our snowman had a stubby little nose and I had no sticks for arms. He’s still pretty cute, though. 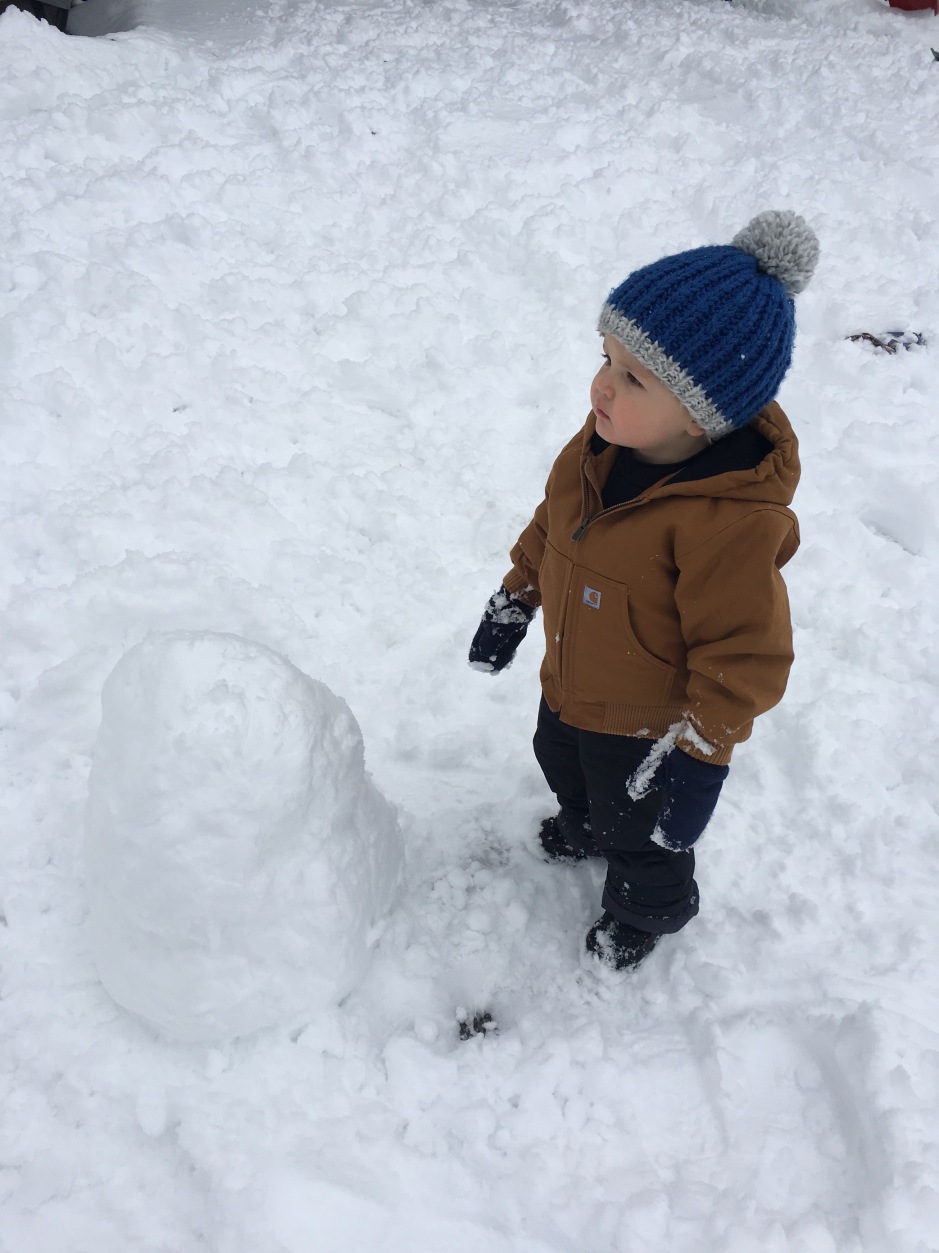 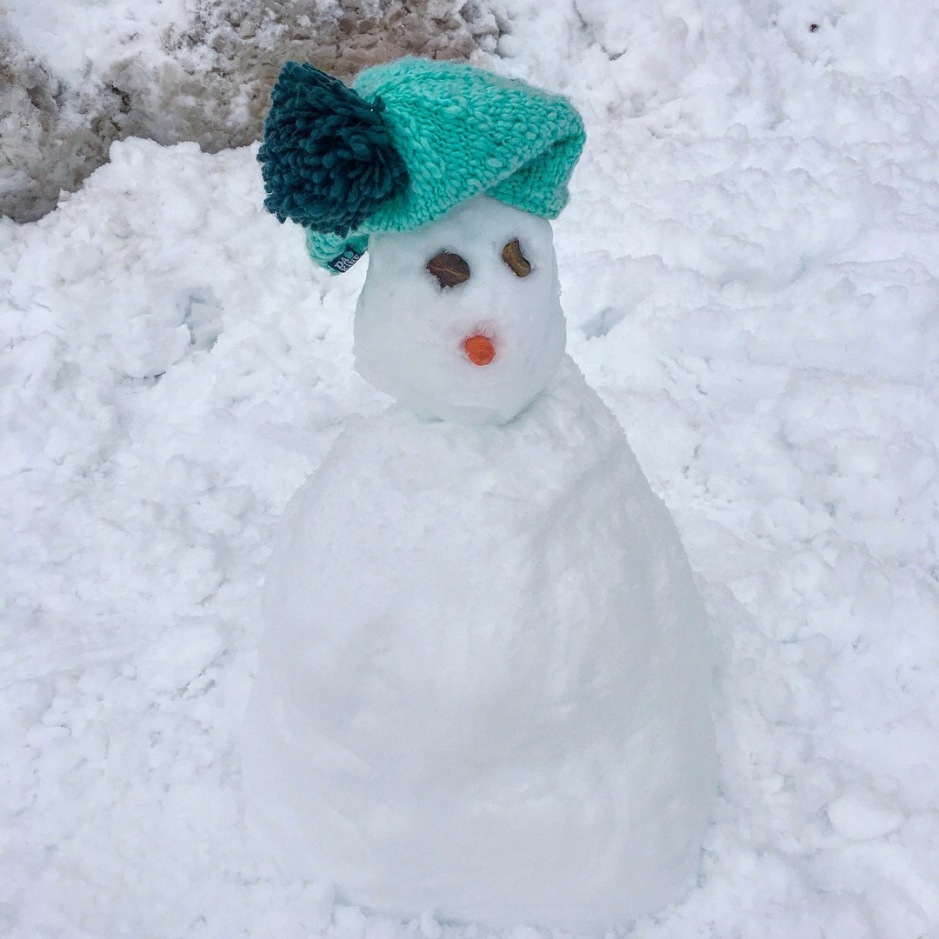 Make snow angels. Again, Oden is a tad too little to understand the magic of a good snow angel in new powder, but I did my best to show him how it’s done!

Go sledding. While we did get some new snow on Christmas, there wasn’t a lot and it was kind of heavy and hard for Oden to get around in. It was John’s idea to take Oden on a tour in the pull-behind sled and we ended up having the best time running around the cul-de-sac near our house. It was a great reminder that kids find the simplest things extraordinary and that fun can be found anywhere. We treated ourselves to hot cocoa after our time in the snow and Oden’s reaction was precious! 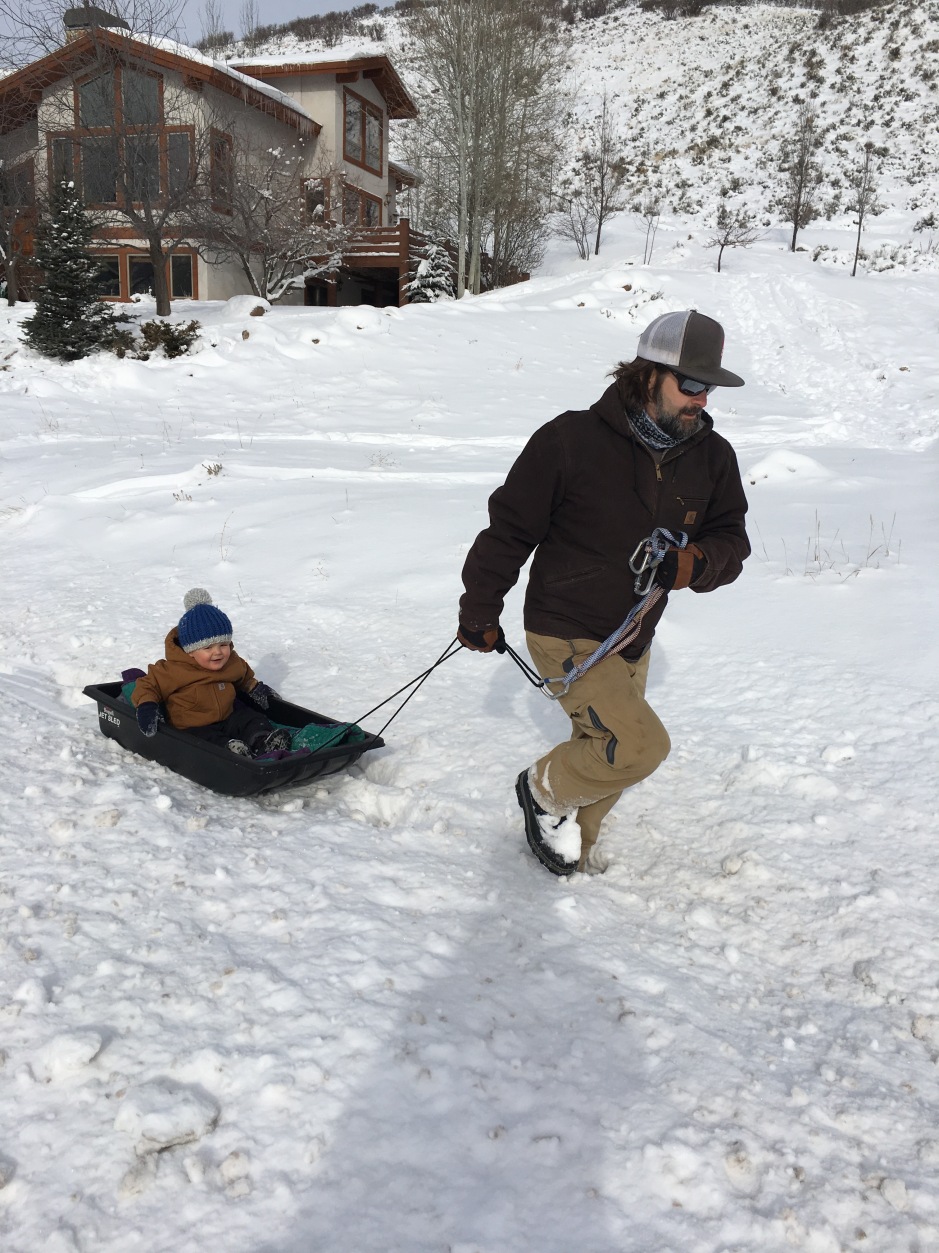 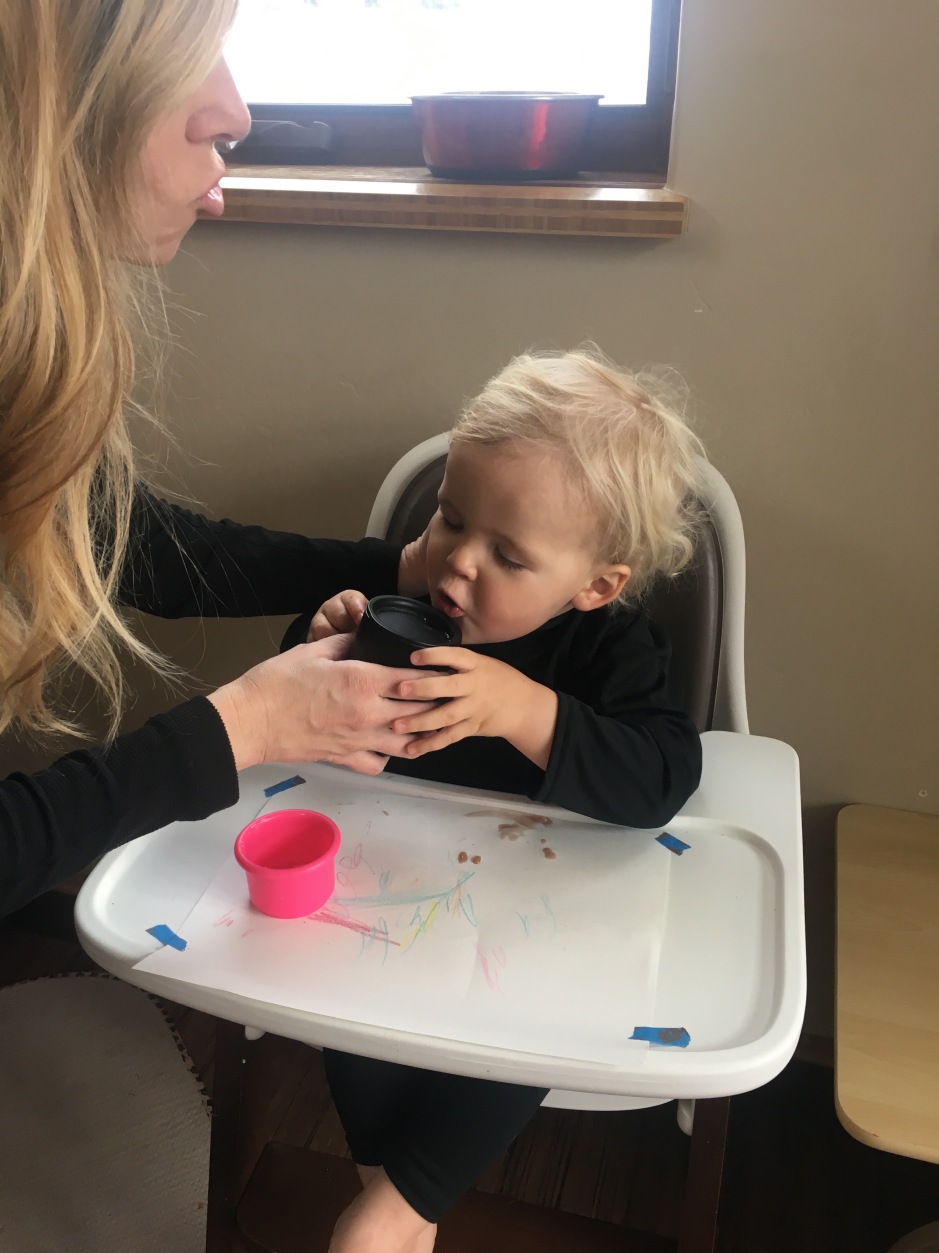 Take a drive to see lights. We basically took the long way home every afternoon we were out. Most lights in our neighborhood came on around 5pm. There was one street nearby our house with multiple houses with huge trees with rainbow-colored lights (my favorite). I taught Oden to clap for lots of lights and it never got old! 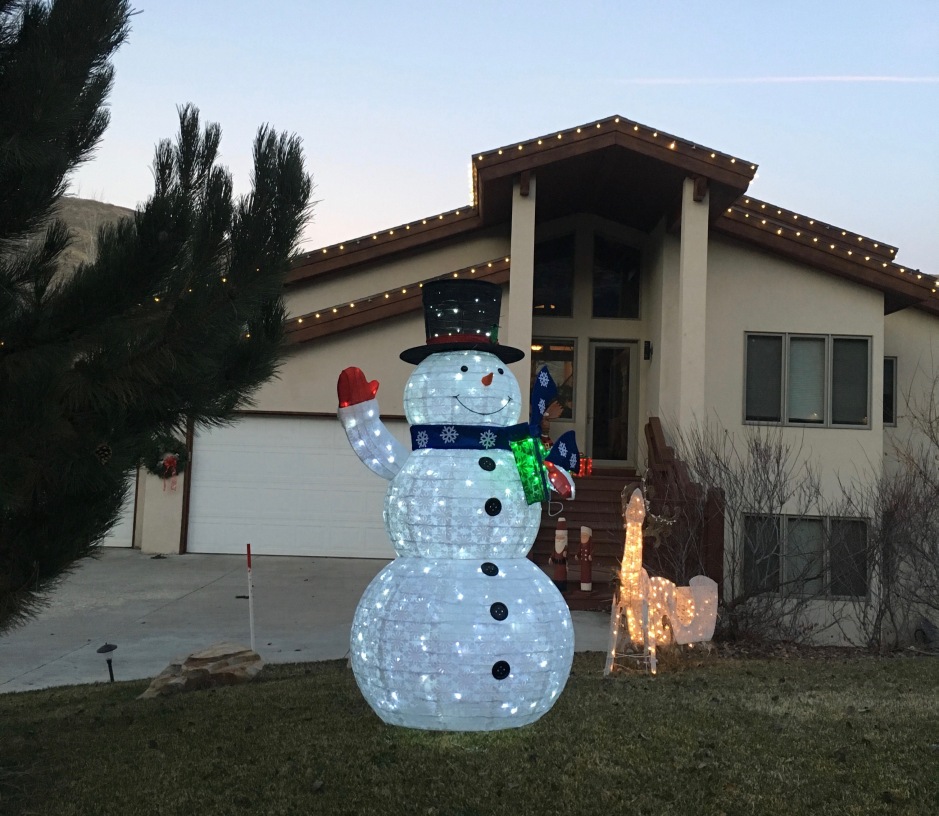 Christmas jammies. If you’d told me 3 years ago I’d be wearing pajamas that matched my kid AND could get John to join us, I would have thought you were smoking crack! But, kids change just about everything and it seemed like a funny little family tradition to start. John was a good sport and we ended up laughing a lot and having a great time in matching blue PJs with Christmas Yetis all over them. I’ll never forget the Yeti dance party to holiday tunes on Christmas eve. 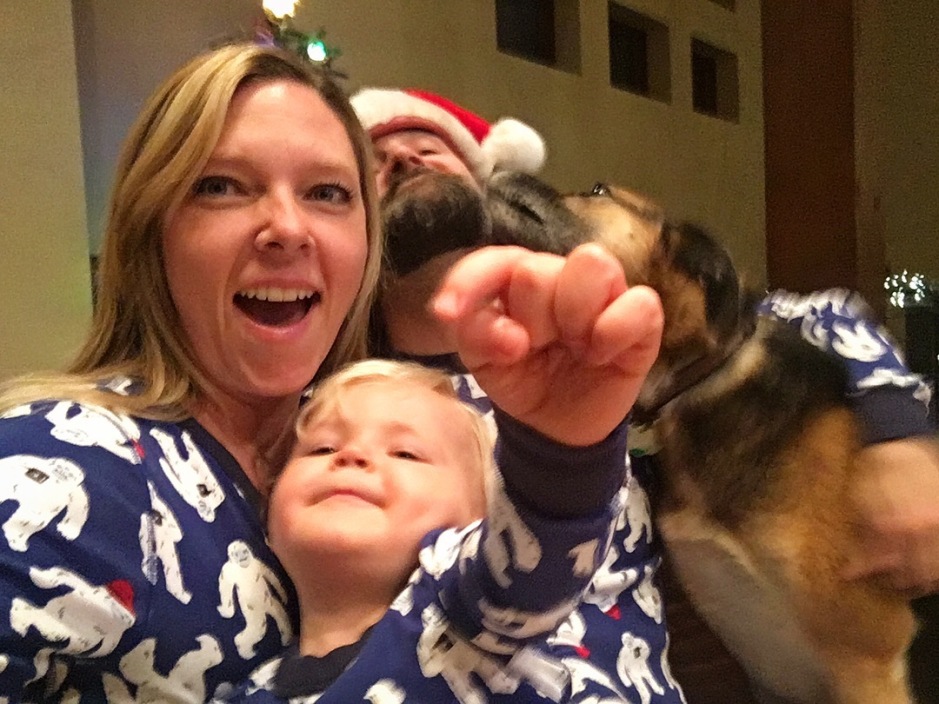 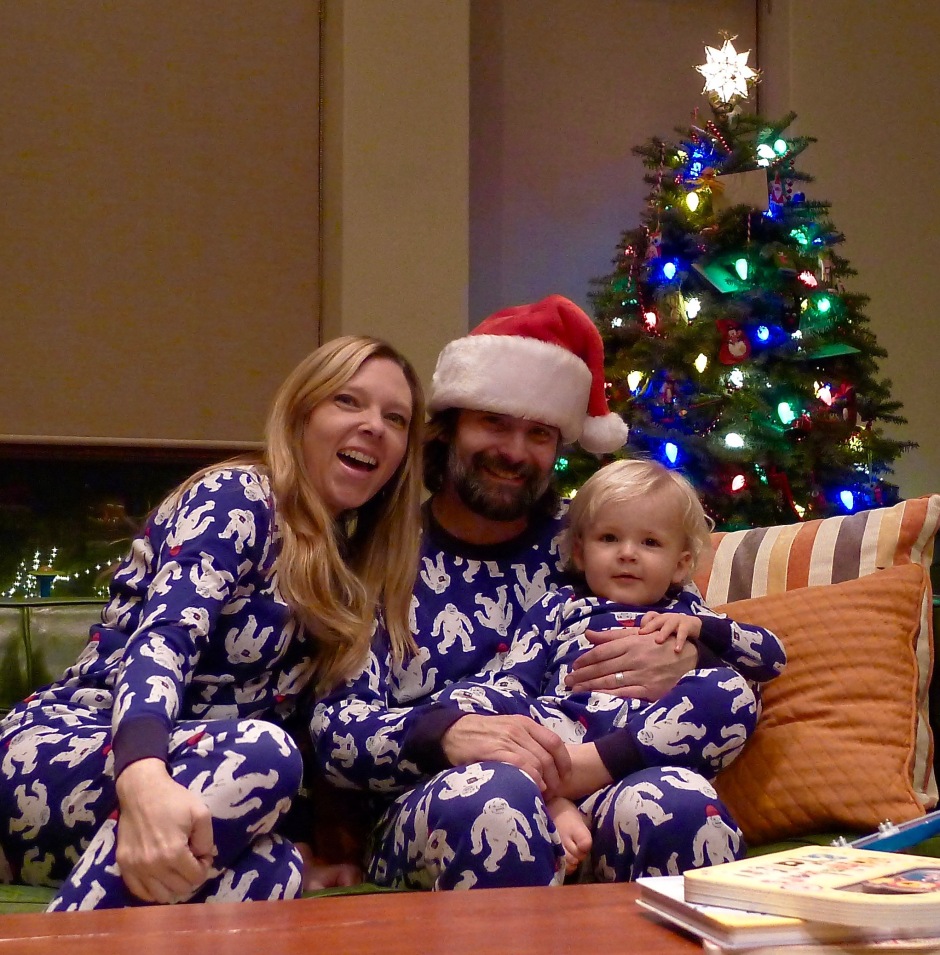 Read “’Twas the Night Before Christmas”. This one was extra special for John because his dad read this Christmas classic to him and his siblings on Christmas eve when he was a child. We even have the raggedy book he read from years ago! To save it from certain destruction, I bought a new one for Oden so John could begin his own tradition. Oden doesn’t sit still for books very often, but he let John read the whole story to him. What a special moment. 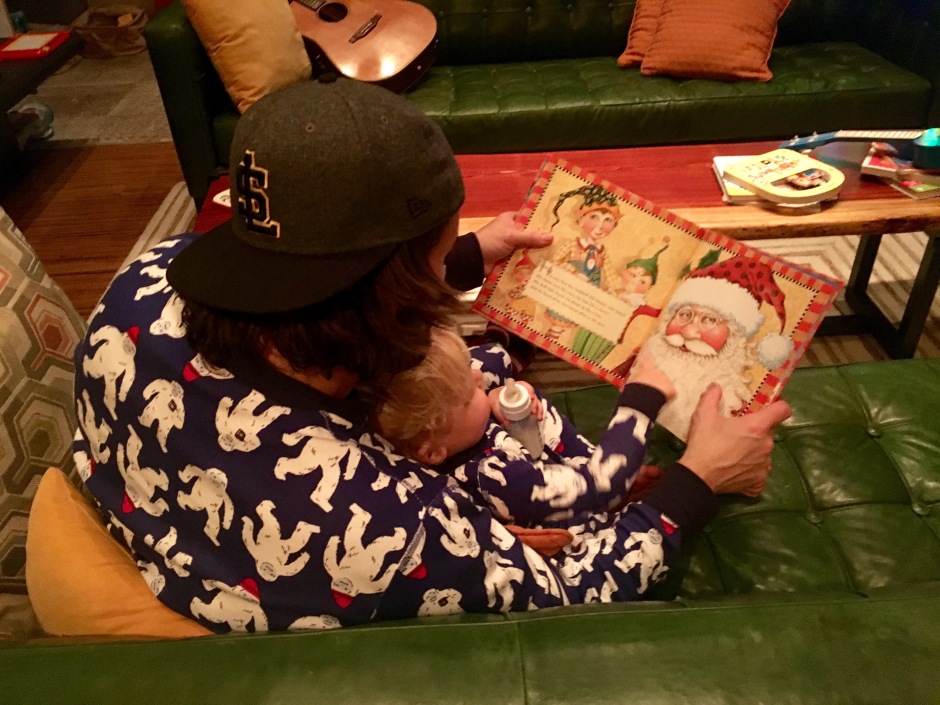 Leave cookies and milk for Santa. Months ago, I picked up an adorable mug and plate set specifically designed for Santa’s milk and cookies. It was so fun to use it for the first time and though Oden didn’t really understand what it was about, he will in years to come. 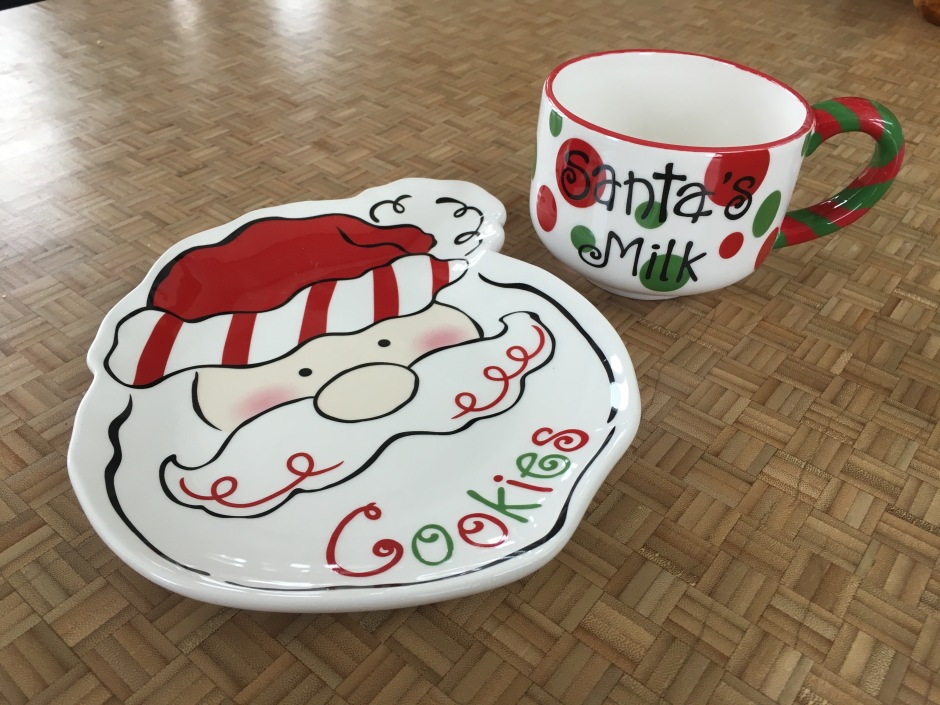 Not bad for our first December Bucket List, right? I’d like to make one every year and continue the traditions we’ve started for our little family. It doesn’t take much to make a priceless memory. Now, how many months until next Christmas? 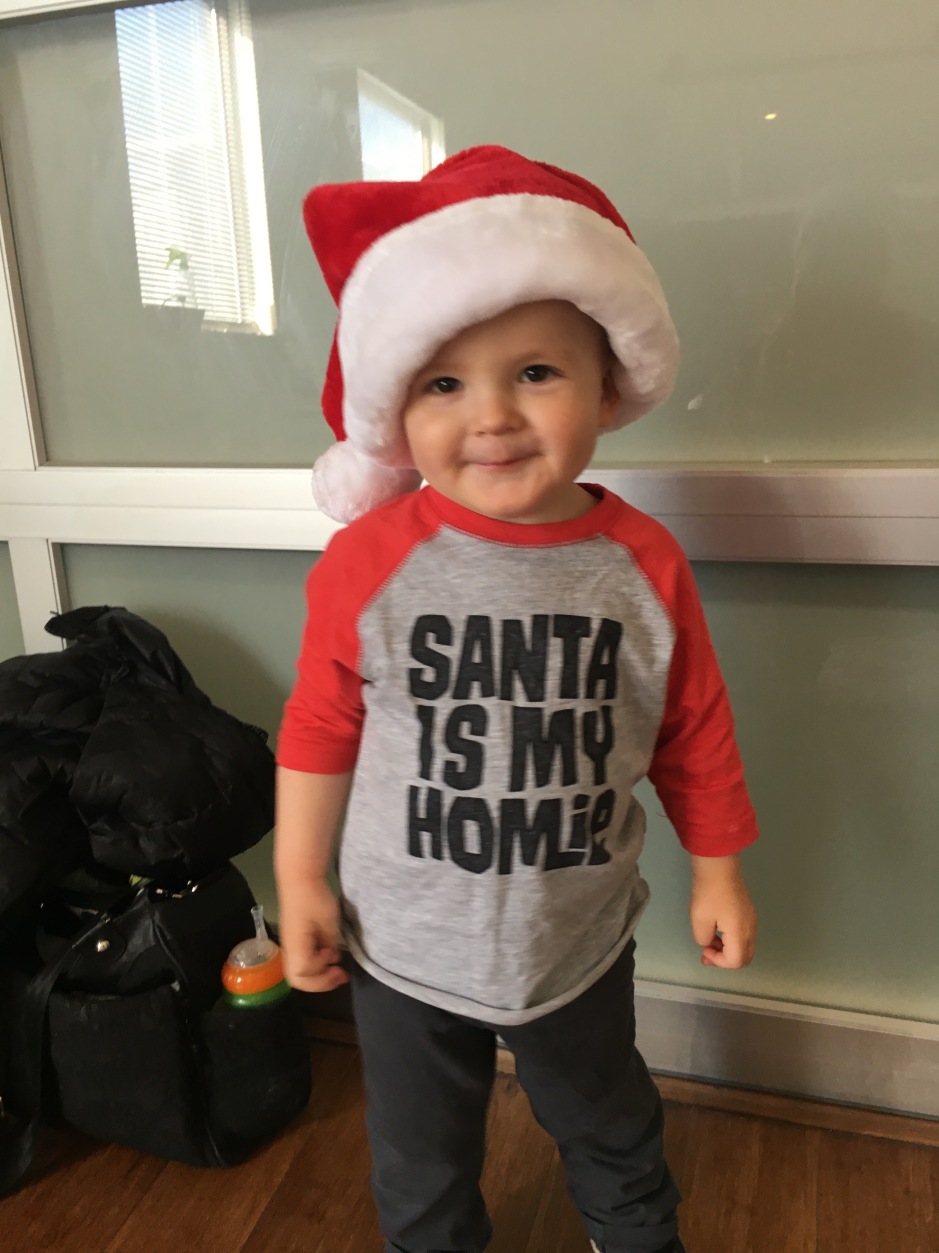 What would YOU add to the list? Are there any traditions you do with your kids that we should add next year?

More about our December to Remember.

One year ago: Finding color in the gray-ness of February.