My Grandpa turned 90 years old this week. Isn’t that amazing? My family traveled from San Diego, Durango, Seattle, and Park City to the little town of Kernville to surprise him with a party. A milestone like that must be celebrated!

90 years is a long time. Think of all Grandpa has seen! He was born during the Dust Bowl. He’s lived through during the Great Depression, the end of Prohibition, the Holocaust, Pearl Harbor, nuclear bombings of Hiroshima and Nagasaki, WW2, the Cuban Missile Crisis, the Baby Boom, the Korean War, the Civil Rights movement, “I have a dream,” Vietnam, the end of the Cold War, the falling of the Berlin Wall, Watergate, the massacre at Tiananmen Square, the end of Apartheid, the disaster at Chernobyl, the space shuttle Challenger explosion, the Rodney King riots, Desert Storm, Monica Lewinsky, the Columbine (and subsequent) school shootings, the World Trade Center tragedy, and Hurricane Katrina. In his lifetime, America experienced the first “talkie” film, “The War of the Worlds,” television, Charles Lindbergh flying solo over the Atlantic, the birth of the national anthem, rock and roll, Elvis, The Beatles, the Summer of Love and Woodstock, Neil Armstrong and Buzz Aldrin walking on the moon, Jackie Robinson signing with the Brooklyn Dodgers, 49 Super Bowls, video games, home computers, the internet, cell phones, electric cars, and so much more. The first Winter Olympics were held the year he was born. There was no Empire State Building yet. The US had only 48 states for the first 35 years of his life, and he’s seen fifteen different Presidents attempt to run the country. Over 90 years, the population of America grew from 114,109,000 to 313,900,000. These incredible events and milestones could fill a hundred lifetimes! 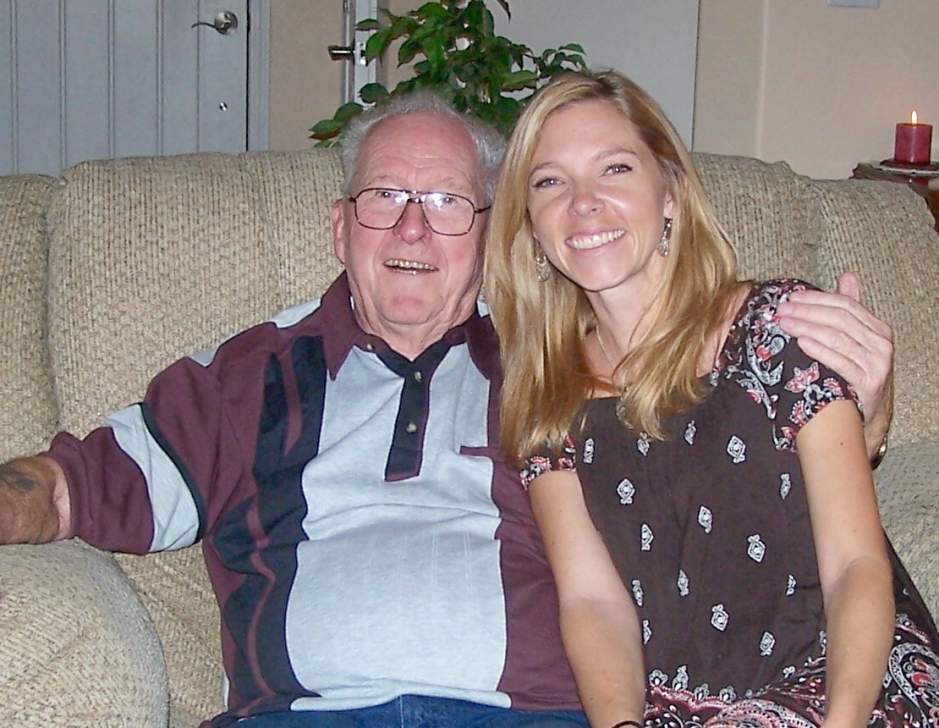 My Grandpa served in the Navy and spent time in the second World War. He drove a truck for a living. He had three children and four grandchildren. He smoked a pipe when I was young and has at least 8 tattoos (I love the chicken and pig, but the hula lady is my favorite). He prefers Canadian whiskey and Miller Genuine Draft, and loves to camp and fish. He’s lost a son. He lost his wife of 55+ years. He fell in love again in his 80s, after meeting a wonderful woman named Edie on a blind date. And when 35 of his neighbors, family, and friends descended on his house to throw him a party, he poured a glass (or two) of Black Velvet and laughed all night with those who love him.

The little surprise that kicked off the weekend was our presence in town. A two-day drive for Betty the trailer and for my parents landed us in the same campground where I spent regular weekends as a child. Edie told Gramps that she had a friend named John visiting at the campground. When they arrived at the camp, he learned she meant MY John- and that the rest of my family was there, too! We visited and grilled a yummy dinner and sent the seniors off to bed, knowing that the next day would hold more fun.

On Saturday, we joined my uncle, aunt, and cousin at my Grandpa’s log cabin. It’s filled with nostalgia and items I remember from my earliest childhood. We decorated and prepped and my dad and brother got some serious meat going on the grill (in 100 degree heat). The whole neighborhood trickled in, family by family, with big plates of food and hugs for my Grandpa. My other cousin arrived, making this the first time in over a decade that the whole family was under one roof. What a party! 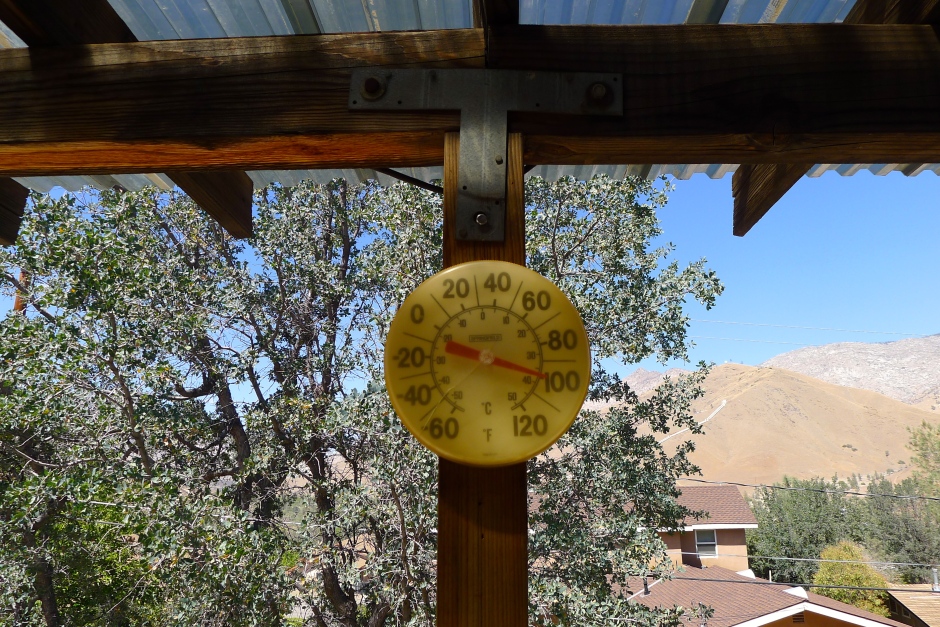 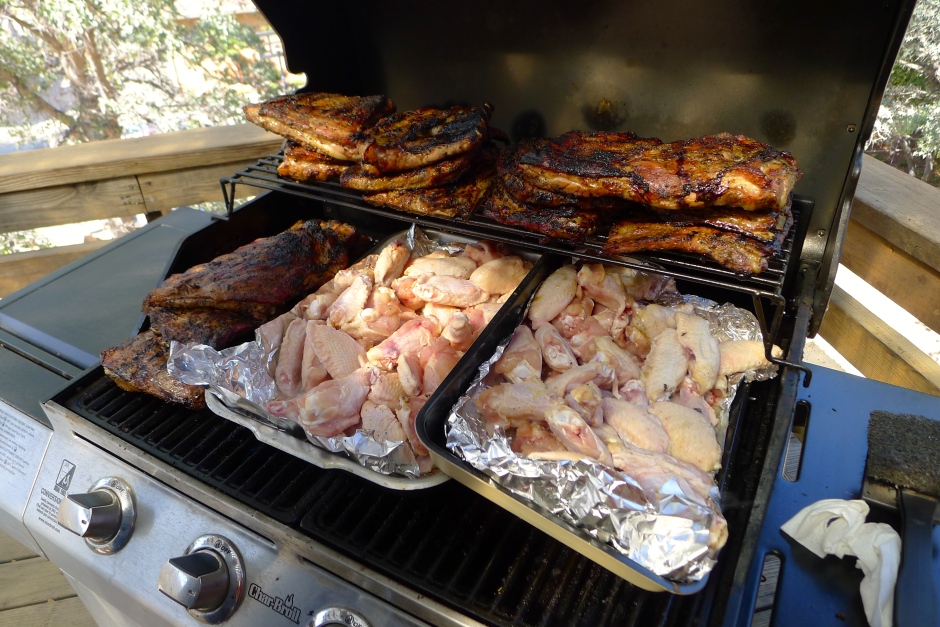 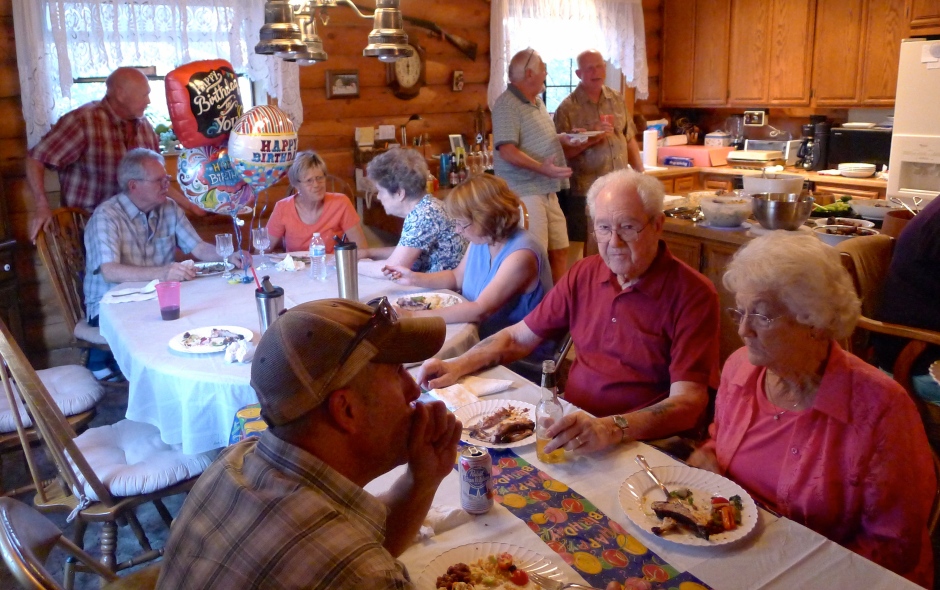 We ate, we drank, and we laughed a lot. I learned how loved my Grandpa is, by people of all ages. A huge highlight was a video that my uncle made, a compilation of treasured family photos and old home movies. There were a few heartfelt toasts and we clinked champagne. There was plenty of delicious German chocolate cake to go around. Gramps insisted on opening each present and card with everyone still there so he could thank each person. There was more than one discussion about planning his 100th birthday party. 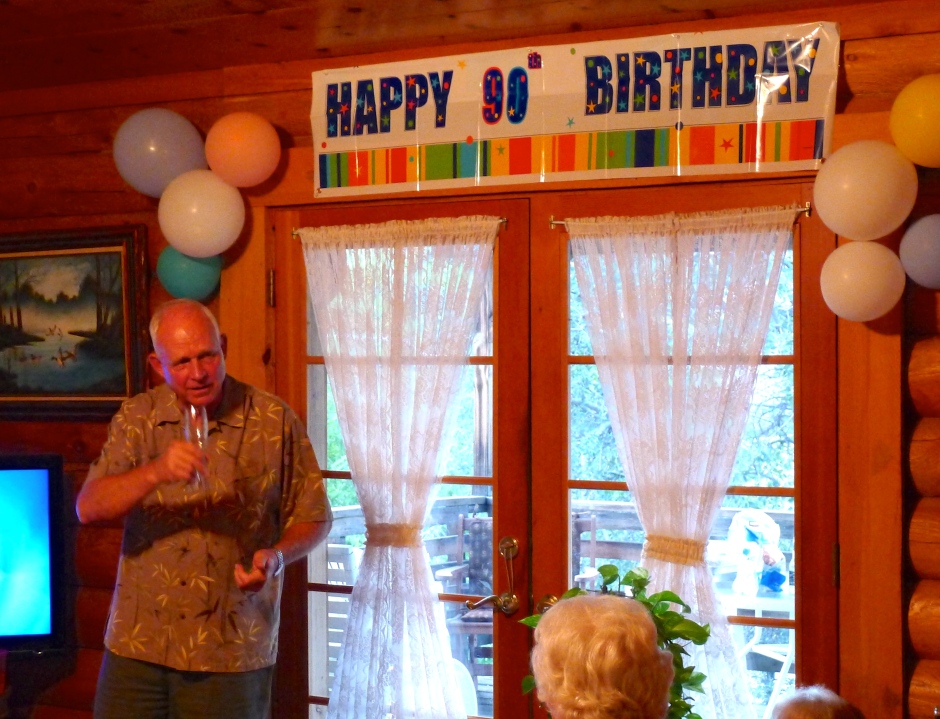 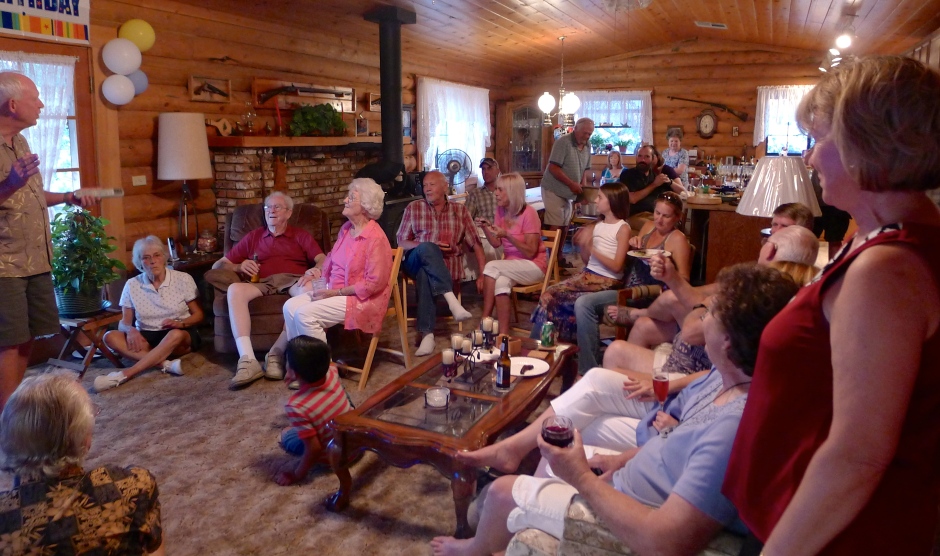 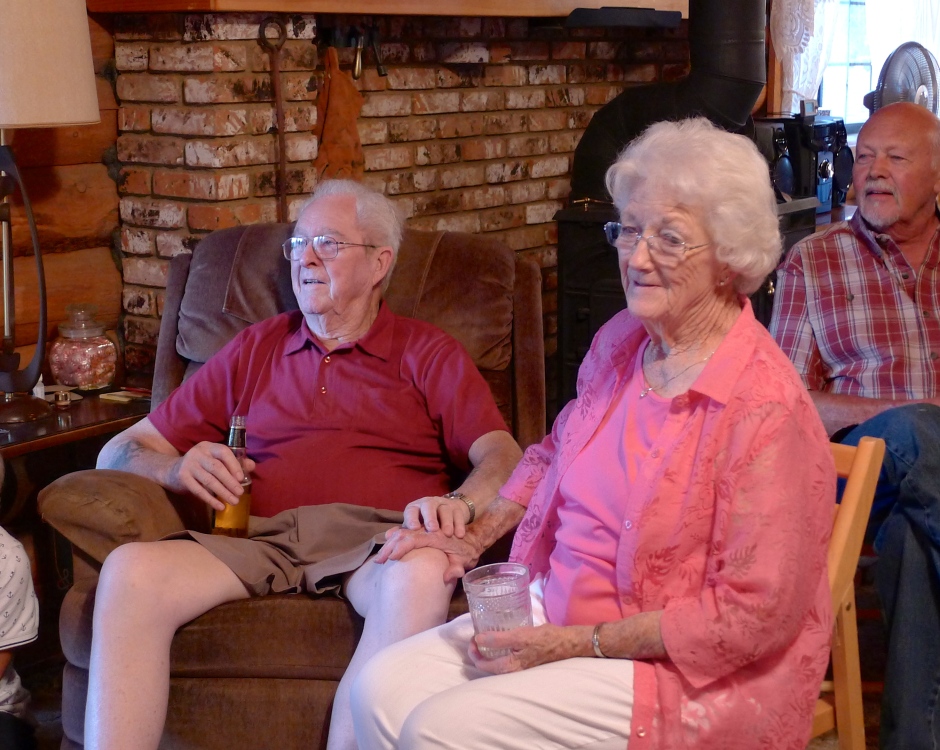 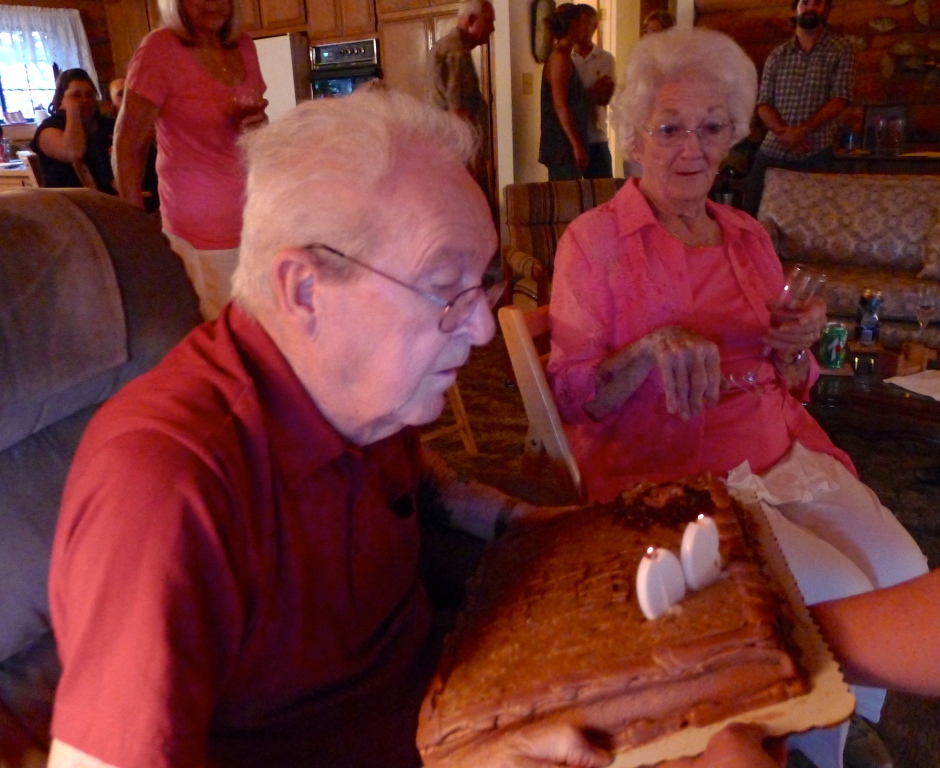 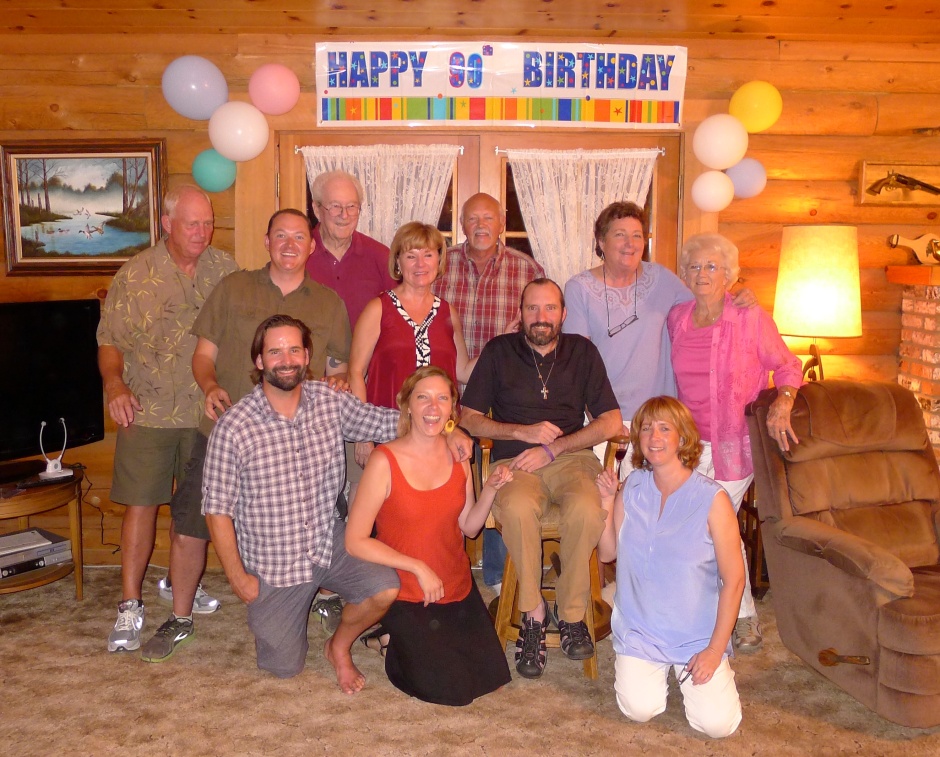 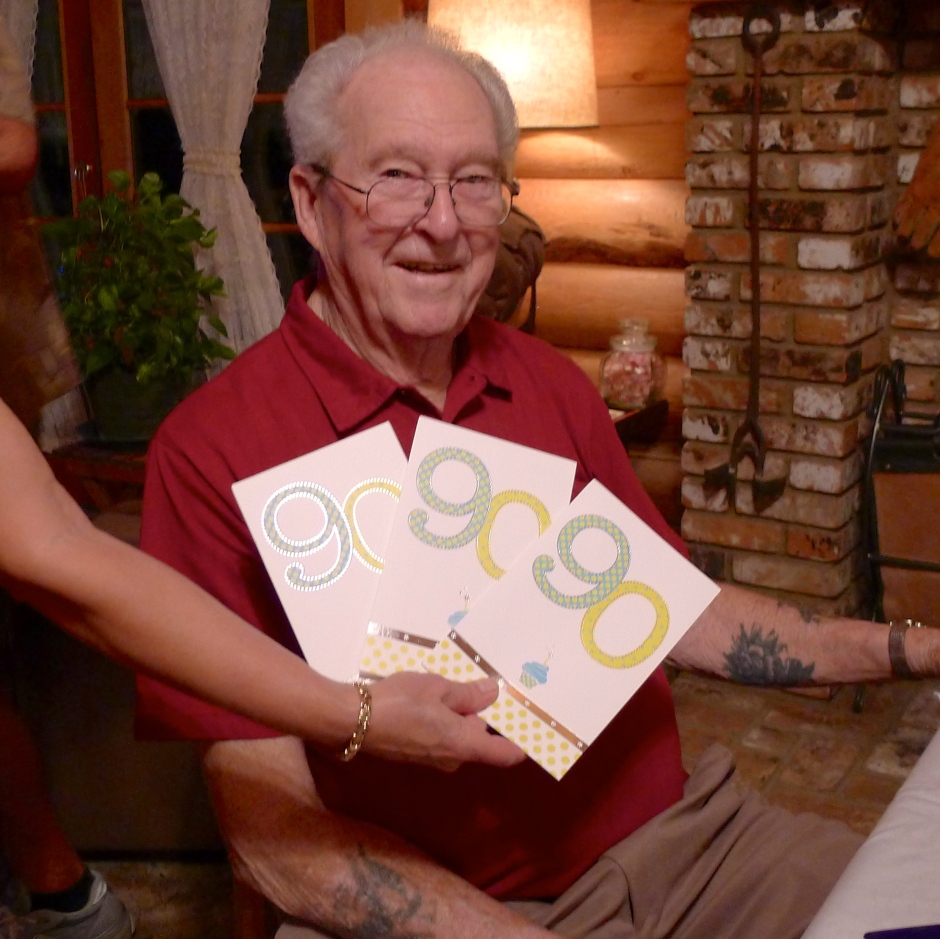 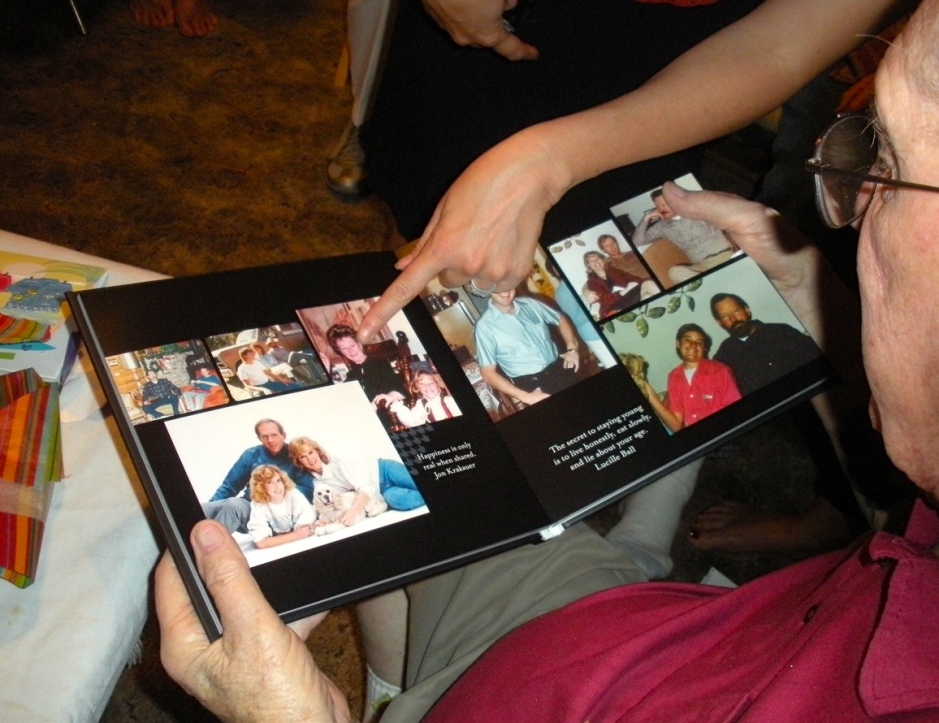 In the morning, we packed up our camp and headed over to have one last brunch with Grandpa and Edie. And then it was time to go-the family would splinter off to our respective homes in three different states. As I’ve seen 100 times before, Grandpa waved from the front porch of the cabin as we drove away. 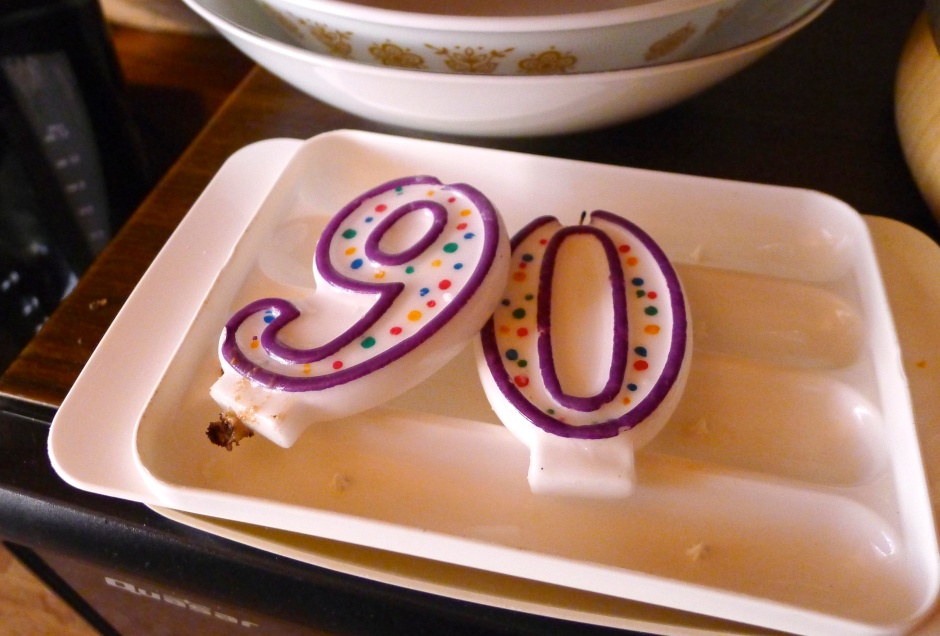 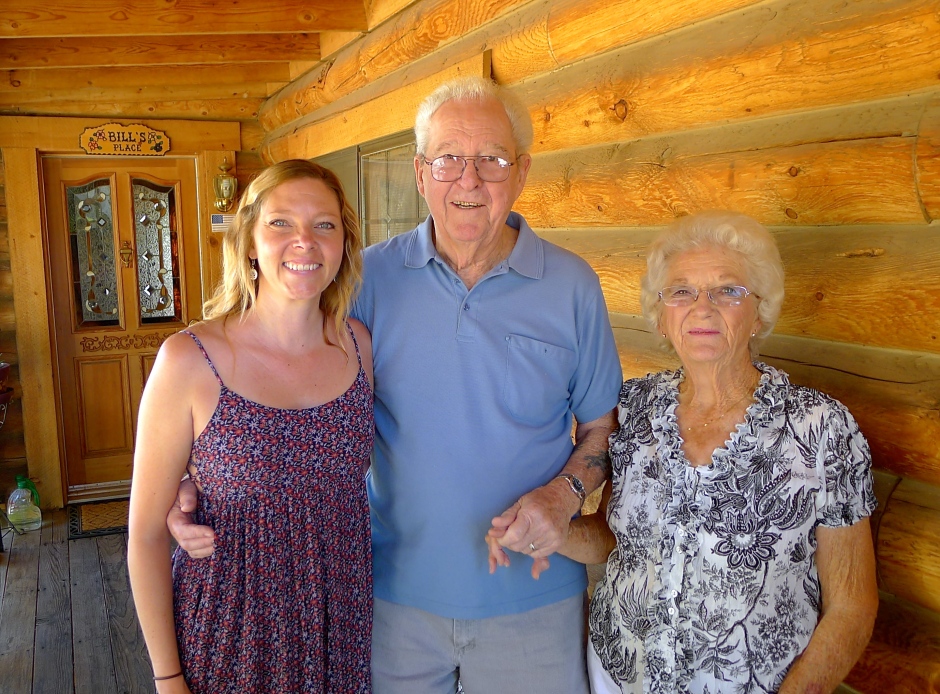 I feel extraordinarily lucky that, within months of my 40th birthday, I still have the opportunity to spend time, laugh, and clink a glass with my Grandpa. I love his stories. He’s lived a great life, and he’s still living it. He is one tough cookie, and I left inspired and full of love. Family is a treasure.

(And I even got one of his fabulous bear hugs before I left.)

Check out some of the trips we’ve taken on the Travel Bliss page.

One year ago: A date at the Park City Farmer’s Market.