We dusted off the Griddler this week!

I just love that name. The Griddler. It holds a promise of fun and a tasty grilled sandwich. Or two.

We’d toted a cooler still full of food home from our ill-fated camping excursion. Turkey. Pesto. Tomatoes. That sounded like a tasty sammie to me, so out came the Griddler. Then, my creative juices started flowing and I pulled a few more items out of the fridge. An apple. Fig jam. A fat jalapeno. A couple of cheeses. I’m not sure how it happened, but before I knew it, we were in the middle of a PANINI DUEL. 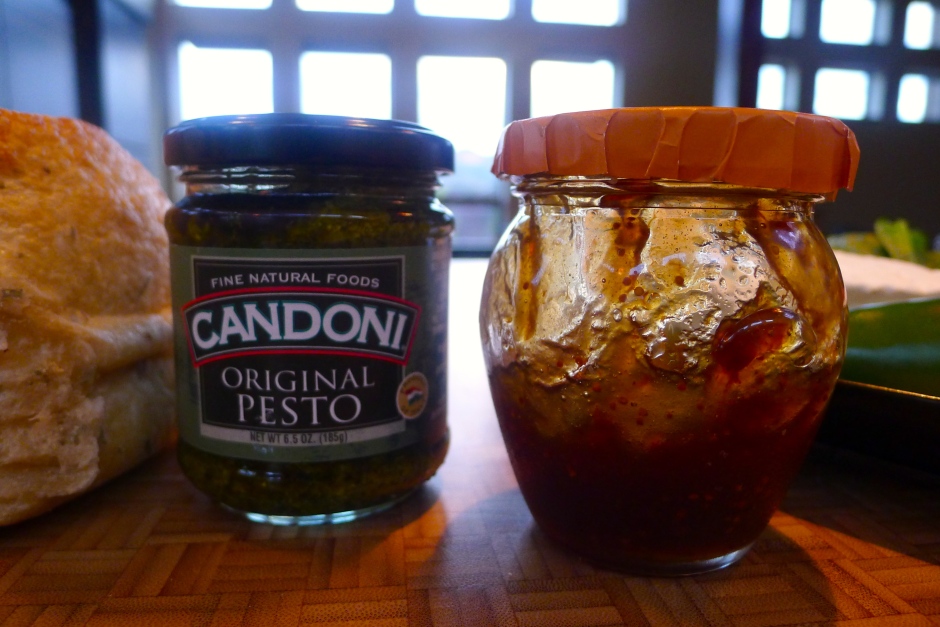 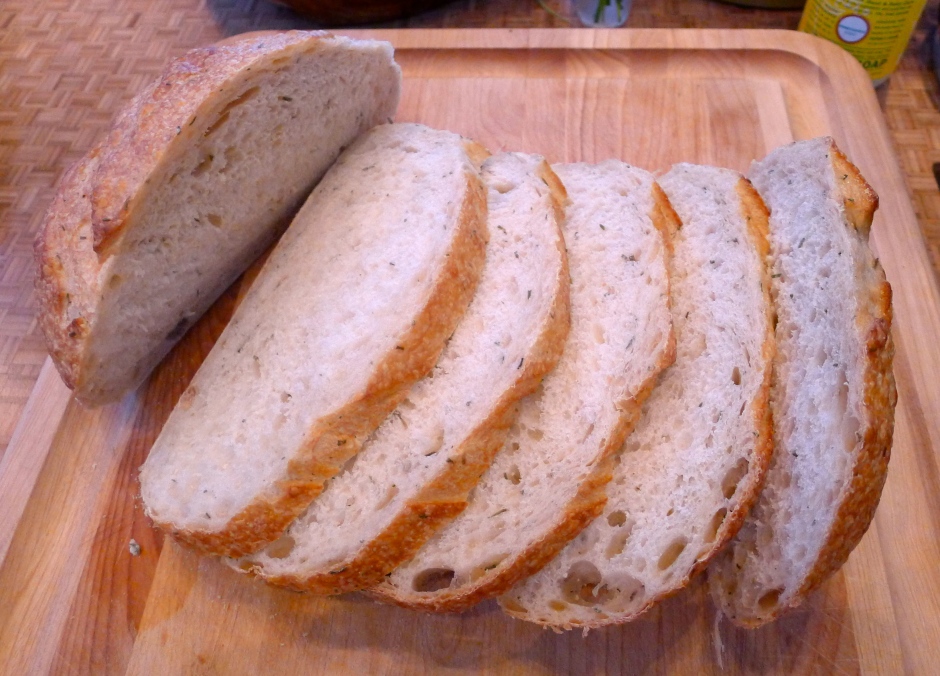 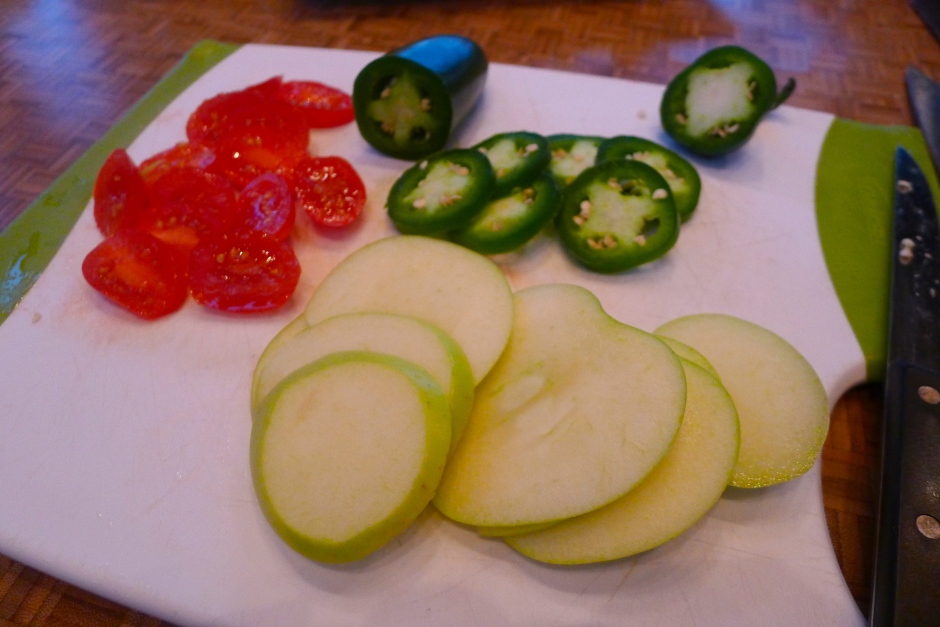 Here’s how the magic happened. First, I crisped up some sliced pancetta in the oven. I literally almost stopped making dinner and simply dined on crispy pig and Pinot Grigio. Can you blame me?

Next, I brainstormed flavor combinations. For Panino #1, I landed on fig jam, turkey, brie, apples, and- knowing it would need a KICK to balance out the sweetness- jalapeno slices. 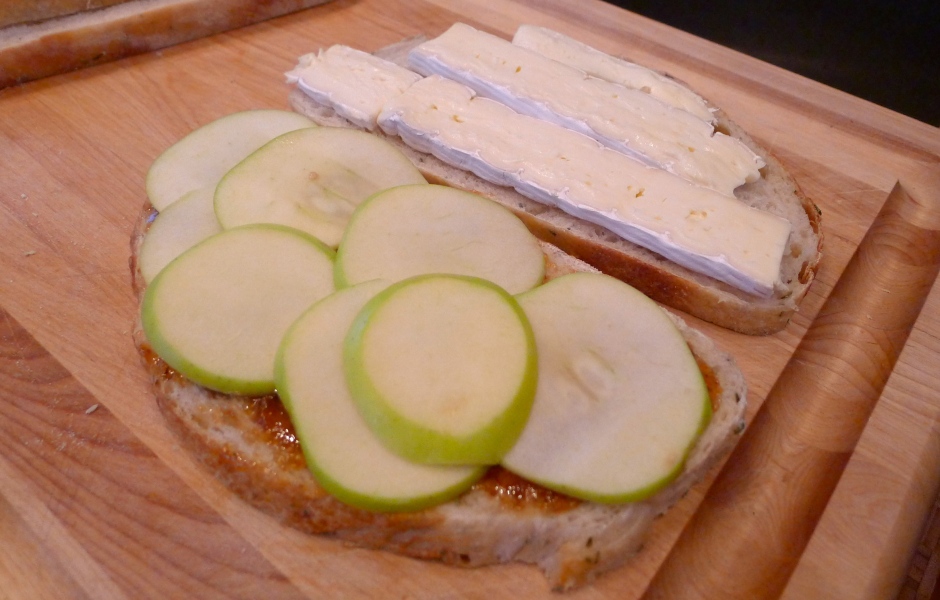 When making a sandwich with many layers of deliciousness, the order of the items becomes important. I placed the apple slices on the fig jam to help hold them in place, then added the turkey and jalapeno. I wanted the cheese to be the “glue” that held the other slice of bread to the sammie and melted in between everything else. 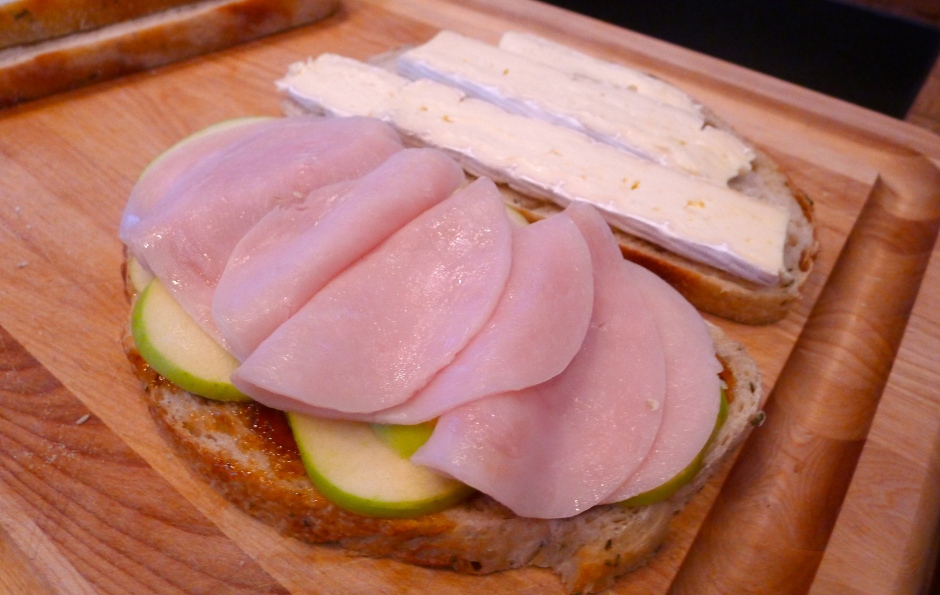 The Griddler is so easy to use. You simply plug it in and let it get hot, place your sammie inside, press down the lid, and leave it alone to grill! 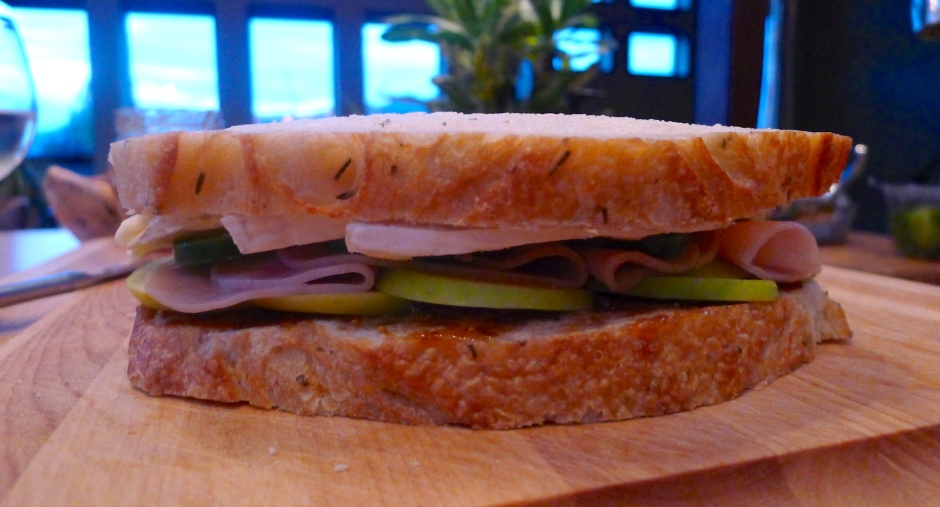 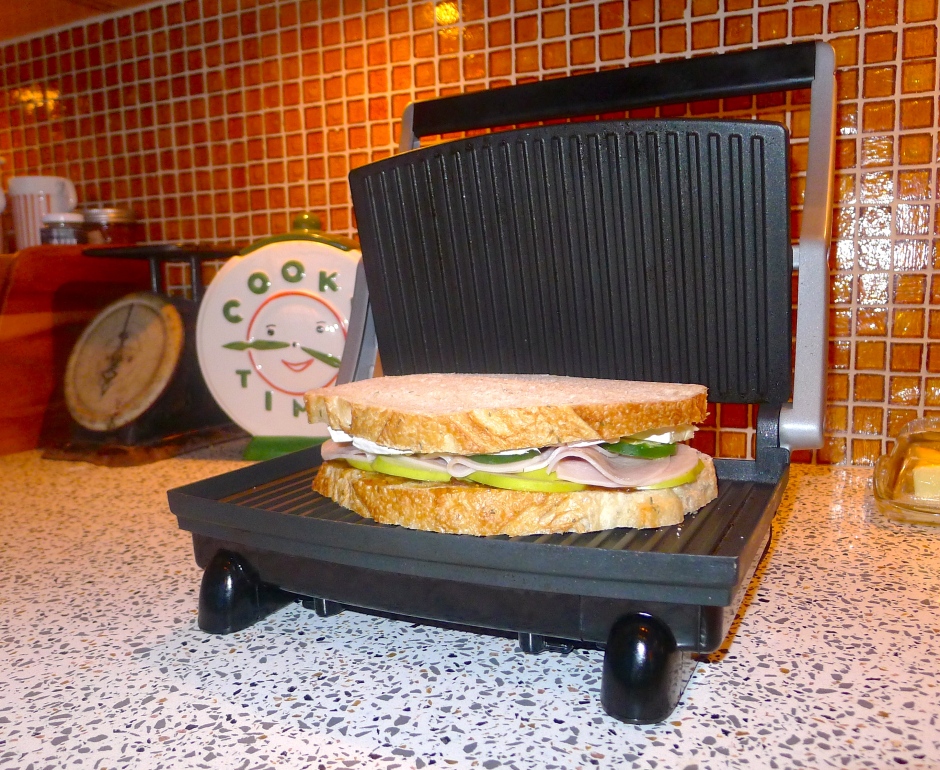 In the meantime, I got started on Panino #2. This sammie was a little more traditional: turkey, pesto, pancetta, tomatoes, spinach, and the wild card– cheddar cheese. Cheddar and pesto didn’t seem to match in my head, but it’s what I had in the fridge! 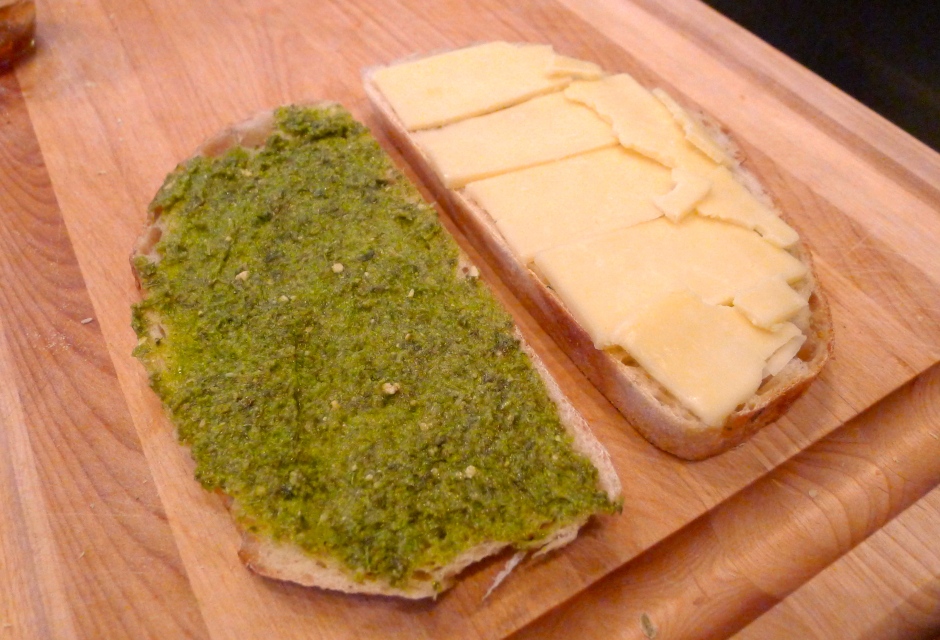 Again, the order of the layers was important- the pesto spread on one piece of bread, the cheese on the other side, and everything else in between.

Look at that melty brie and crisp bread! The Griddler compresses the sandwich as it grills, smooshing all of the wonderful ingredients together. You san see the layers of turkey, apple, and spicy jalapeno, the brie melted in between it all. Cue drool.

It didn’t take long for Panino #2 to crisp up. Again, the layers of ingredients were pressed into something magical, held together with melted cheddar. Yum!

John and I went splitsies, each taking one half from each Panino. It was time for the duel: Which Panino was better?

I started with a bite from the sweet and spicy Panino #1. The apple slices still had a slight crunch, which (along with the crunchy bread) added texture. The Brie melted wonderfully and mingled with the fig jam. The apple and fig were sweet, but the turkey added a salty bite. But the jewel on the crown was the jalapeno. The sweetness needed the spice for balance. Panino #1 was heavenly. 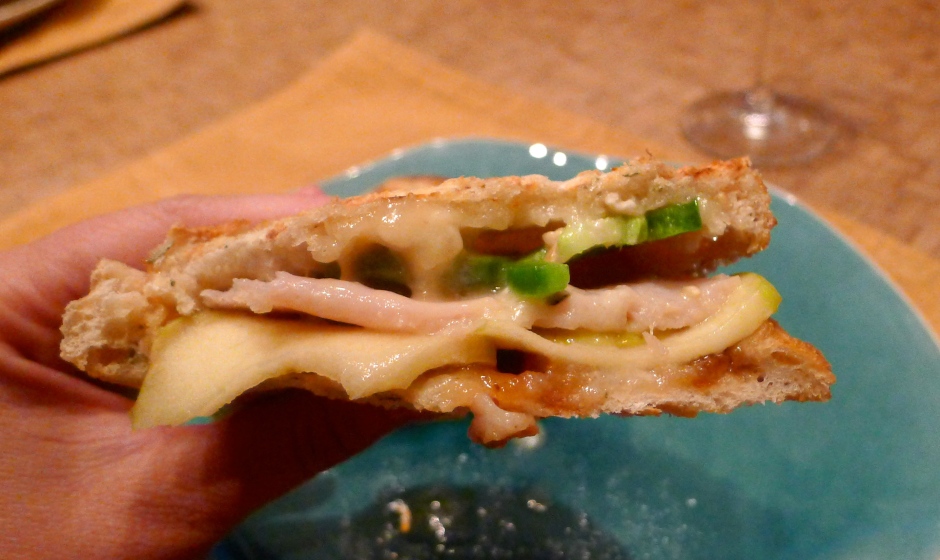 Panino #2 was entirely different. There was no sweetness. It was a mouthful of savory goodness– a sandwich you might see on various menus, but executed perfectly. The cheddar and pesto were delicious together, and the pancetta added a crispy layer in between the meat and veggies. Absolutely delicious.

John and I alternated bites of each Panino, describing the flavors and trying to decide which was better. The only things not completely amazing about these sandwiches are the photos of them! But we needed a winner. The verdict?

It was a tie. I held firm that the spicy-sweetness of Panino #1 was uniquely scrumptious, while John thought the texture and overall flavor of Panino #2 was better. We both agreed that adding pancetta to Panino #1 would have sent it over the top- another hit of salty crispness would have been perfection.

So the Great Panini Duel ended in a draw. They were both so delectable that I didn’t really care. But while we were happily munching away, John challenged me to a Panini grill-off. We’ll each come up with a fantastic grilled sammie and see whose is better! Stay tuned!

In the meantime, do yourself a favor and make these sandwiches. You tell me: Which one is better?

On one slice of bread, spread a light layer of fig jam. Place turkey slices over the fig, then the pancetta, then the apple slices, then plenty of jalapeno. Cover the other piece of bread with slices of brie (it’s easier to cut when it’s chilled). Place the cheese side on top of the fig side and grill in a Panini-maker until the bread is browned and the cheese is melted.

On one side of the bread, spread a light layer of pesto. Place the turkey slices over the pesto, then the pancetta, then the tomatoes, then the spinach. Cover the other piece of bread with sliced cheddar cheese. Place the cheese side on top of the pesto side and grill in a Panini-maker until the bread is browned and the cheese is melted.

**A list of recipes can be found on my FOOD BLISS link! Yum!**