“I think there’s just one kind of folks. Folks.”- Scout Finch in “To Kill a Mockingbird”

My favorite book of all time is “To Kill a Mockingbird” by Harper Lee. I started reading at an unusually young age. “To Kill a Mockingbird” was probably my first real book, and it’s stuck with me. I love everything about it and I read it often. So when I googled “Park City bookstores” and Atticus Teahouse came up, I was pretty intrigued: Atticus Finch is the name of the father in my beloved story. A quick glance at their website told me that the shop offered coffees, teas, sandwiches, and new or used books. After being temporarily sidetracked by a vintage car show on Park City’s Main Street, I paid Atticus Teahouse a visit.

Sure, I’ll sip a cup of hot tea on a snowy day if I have a sore throat or something. But I’ve never enjoyed iced tea, and will order a cup of coffee over hot tea every single time. Atticus offers a full service espresso bar and various coffees, but the tea selection was staggering. When in Rome, right? After kindly being offered a sample taste, I selected an iced Ginger Apricot Peach tea. My first few suspicious sips surprised me… it was delicious. 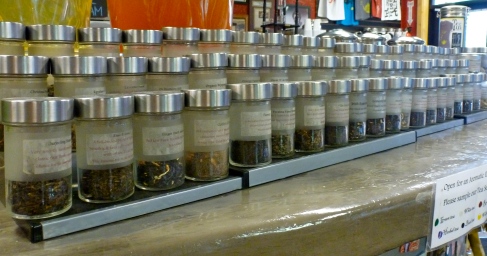 I ordered a turkey wrap named after my favorite character in the book (Scout) and found a seat by the window. There’s a shaded patio out front with plenty of al fresco seating, but I wanted to get a feel for the inside of the place. Opened in July of 2010, Atticus Teahouse is a family-run business. It was smaller than I expected- they pack a lot into the space, but it works. Atticus Teahouse is a feast for the creative eye: there is so much to take in, from random chalkboard quotes to the vintage-style art on the walls to the variety of patrons coming in the door. 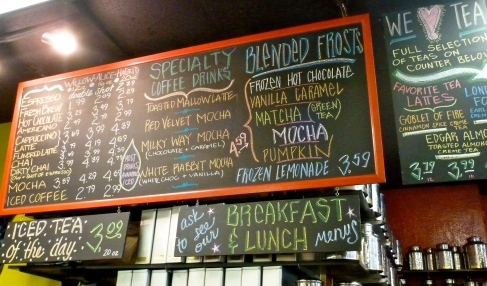 Do you see all of those canisters lining the walls, filled with loose leaf tea? (Do you also see a patron so comfortable, he decided to take a nap?)

As I waited for my wrap, I roamed around the shop. Something that impressed the girl in me who used to work in a preschool was the Kids Forest– a little nook tucked into the back of the store, decorated imaginatively with a child’s eye in mind. Any place that recognizes the importance of childhood reading gets a HIGH FIVE from me. 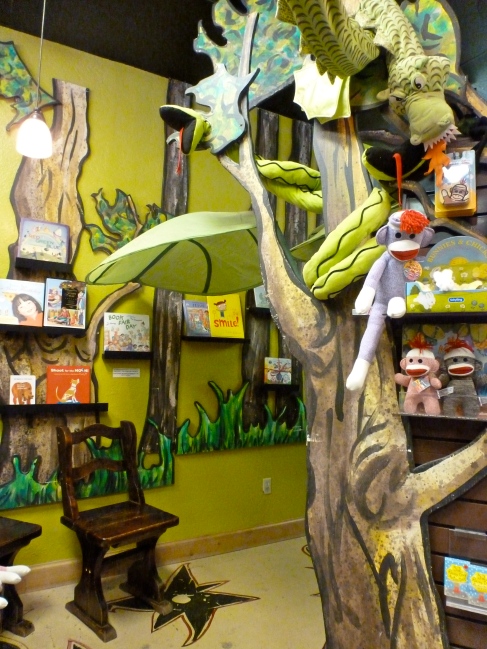 And then, of course, are the books. There are tall bookshelves lining the walls, the upper shelves accessible only by ladder. There are free-standing bookcases filled with every genre of book. It was clear space was limited, with some boxes of used books on deck, ready to be shelved. The owners of Atticus purchase used books for resale, and also offer new books and a wide array of magazines.

Within this small space, they are still able to offer all sorts of interesting and thoughtful gifts. There’s also a significant area for lounging, anchored by a worn-in leather couch. People ticked away on laptops and leafed through newspapers while music by The Black Keys and The Rolling Stones wafted through the air. 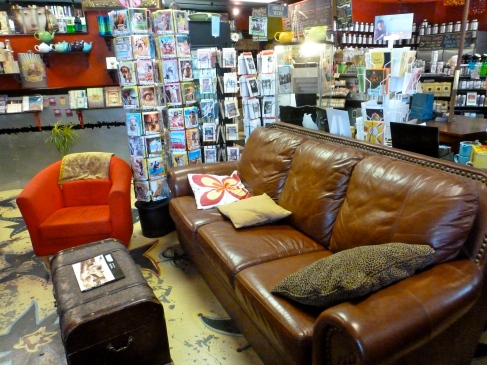 I love the colorful concrete floor, hand-painted by a family member.

When my lunch was ready, I was borderline ravenous. The Scout Wrap has turkey, sharp cheddar cheese (mmmm), and a ton of veggies in it. It wasn’t too big, and it wasn’t too small. It was super tasty! 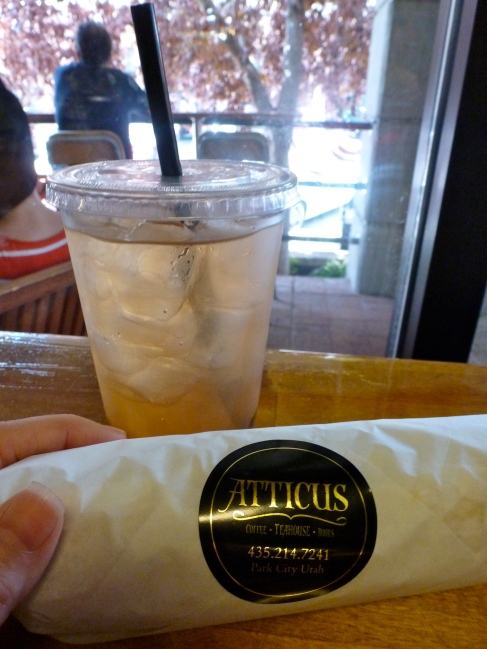 As I happily munched away, I watched all walks of life drop into Atticus Teahouse. Some were clearly locals, efficiently bypassing the people browsing the tea selection to hand their travel mugs over the counter for a refill of coffee. I listened to a family from out of town, chatting over iced lattes about which restaurant to visit for dinner later. A gentleman sipping hot tea greeted a younger man at his table and proceeded with a casual job interview. And Mr. Nap snoozed away.

Before I left, I just had to purchase a few greeting cards. They are my weakness, and Atticus Teahouse had a ton of options! I picked up some gems before I packed up to head home. 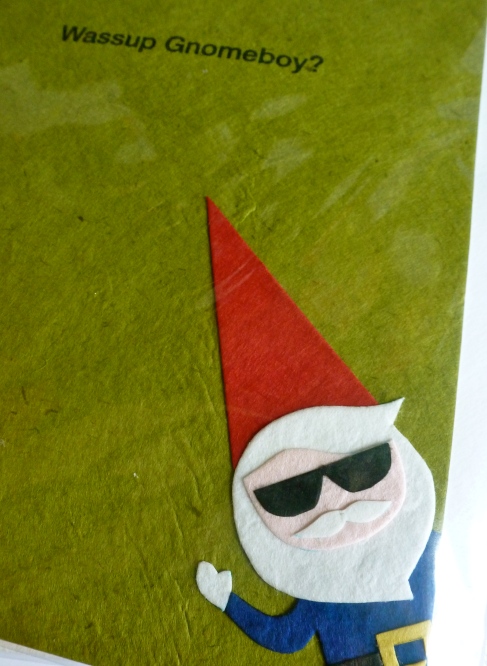 Maybe it was the yummy tea. Maybe it was the scrumptious turkey wrap. It could have been the uber-friendly staff that gave me samples, or the bohemian hippie vibe (you know I love that).

Whatever it was, I was comfortable at Atticus Teahouse. I felt welcome and I will go back. I mean, I didn’t even get a chance to try any of the tempting baked goods on display!

Before I left, I snapped a photo of Gregory Peck as Atticus Finch, framed on the wall. I still haven’t seen the movie version of “To Kill a Mockingbird” in which he starred, but I know I’ll love it.

And then I asked for a second glass of the Ginger Apricot Peach iced tea, TO GO.

Atticus Teahouse made a tea believer out of me.