In my family, birthdays always felt like a big deal. It was a day where I was allowed to call the shots. Generally, my BFF Amanda and I went to an amusement park and pretended to be twins. On my 14th birthday, I had a super fun sleepover. Truthfully, I was always a little bummed that my birthday fell during Christmas break because it meant I never got to have cupcakes in my classroom at school and get all of that attention…but no matter what we did that day, it was special and I felt loved. As an adult, I still adore birthdays. I try my best to remember others’ birthdays (less easy with Mom Brain). And I’m not one of those people who lies about her age or tries to keep her birthday a secret. I want to eat cake and do something fun and clink a glass with you and you and you! What a privilege to celebrate another year of life!

Ok, so maybe a 2-year-old doesn’t view birthdays as a privilege…or even know what it means yet. But especially when you have just one baby, they turn into a big deal. For Oden’s first birthday, we went all out with a big old fiesta. Lots of kids, lots of grown-ups, lots of food and drink, themed decorations, fancy homemade cupcakes, the works! A first birthday is generally for the parents (cheers to surviving year one!), but Oden had a lot of fun and I’ll never forget it. 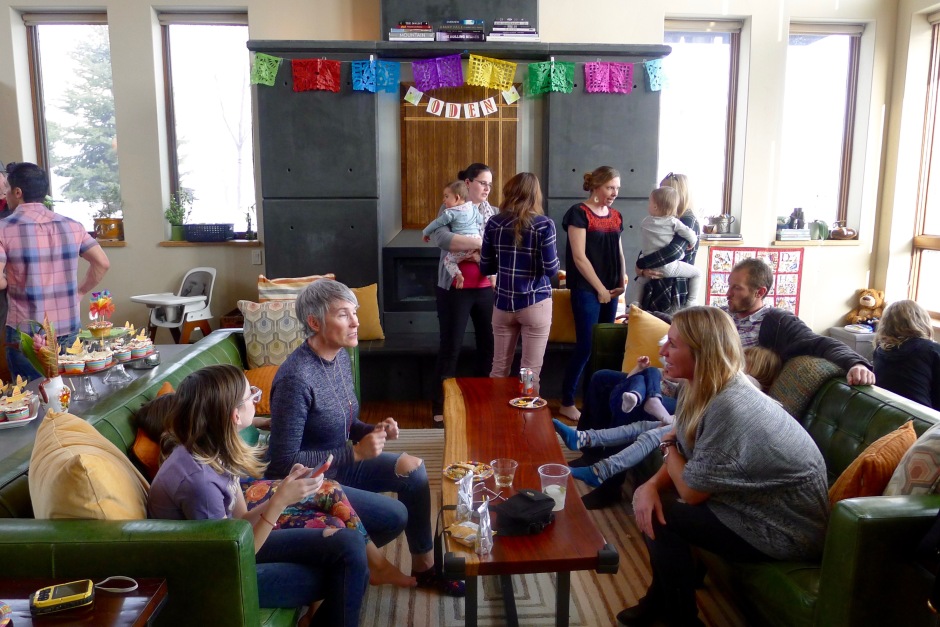 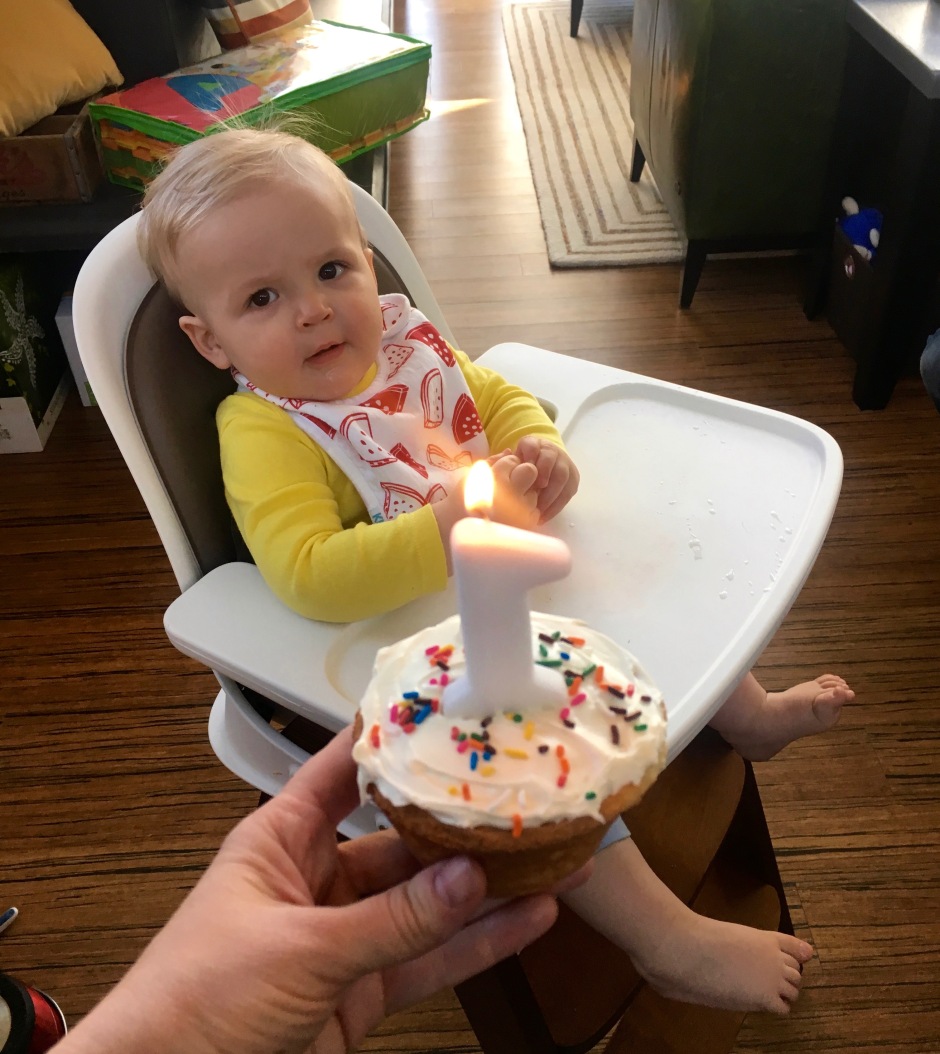 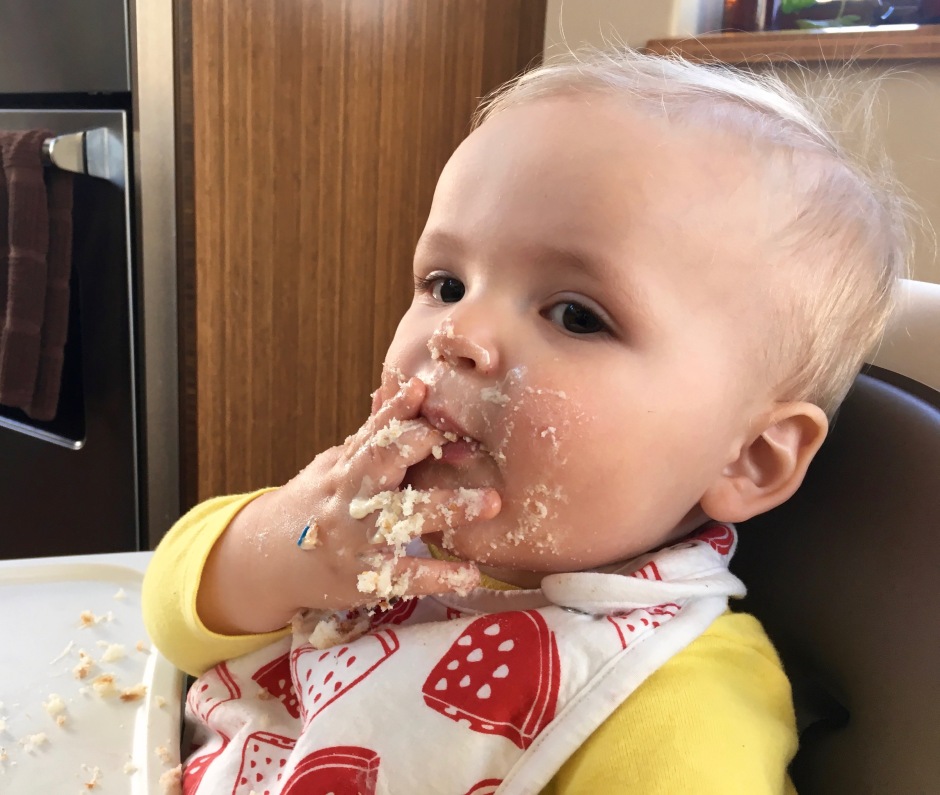 This year, I wanted to keep things more low-key. My goal as a mom is to make Oden always feel special and loved on the day of his birth, which also happens to be the best day of my life. For Oden’s second birthday, I simply wanted to find ways to make it feel out of the ordinary and set it apart from every other day. My parents came in from Colorado to help us celebrate as a family…and we had fun!

Where to begin? Well, Oden loves balloons. Since he was a tiny baby, we have walked past the balloon display at the grocery store and waved at them all. He received a balloon at the local fire station’s open house last year and he was SO excited. So I picked up two balloons for him to see when he woke up on his birthday, a big smiling sunshine and a number 2. I brought them from their hiding place in a closet after Oden went to bed and my mom helped me hang some pompom decorations I’d saved from Oden’s baby shower. We set out his little gifts and anticipated his reaction in the morning, which was nothing short of gleeful! 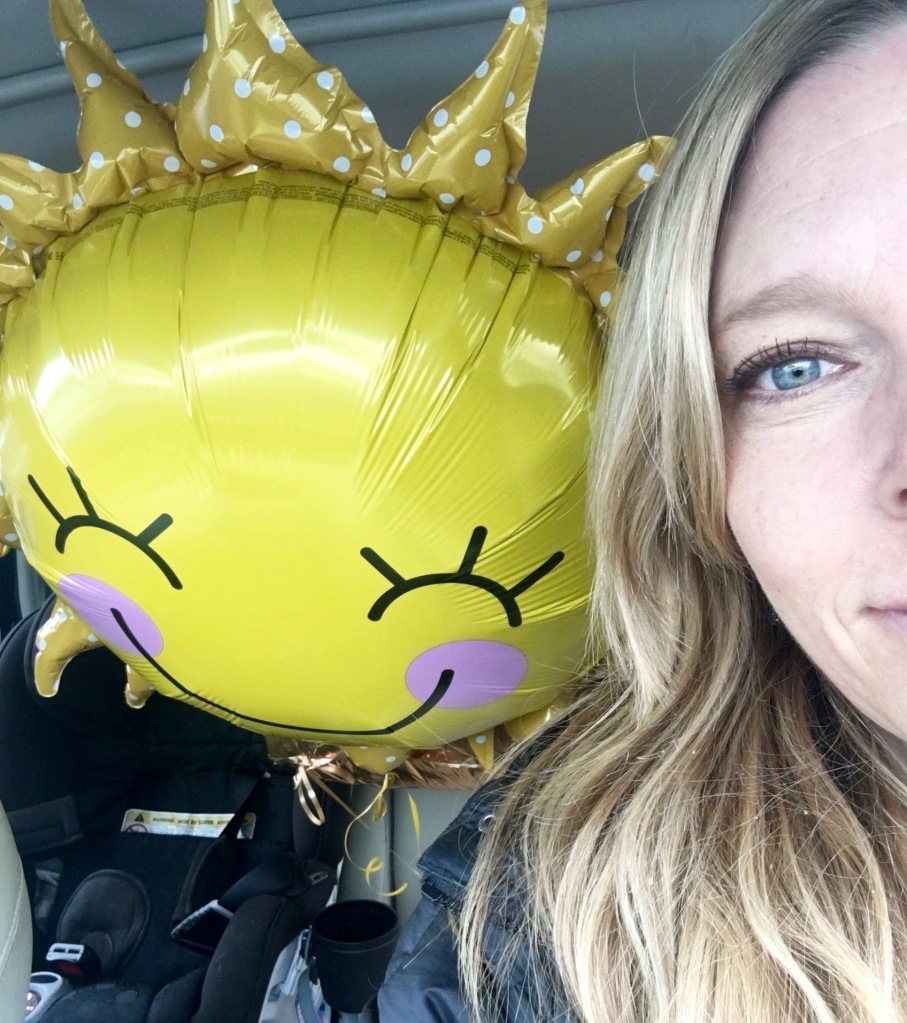 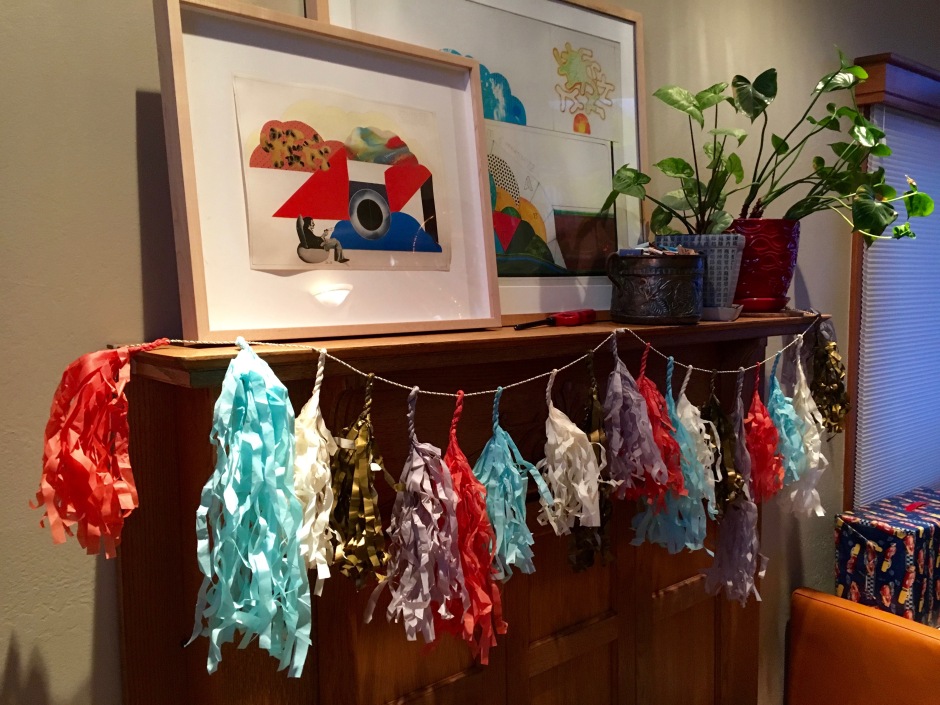 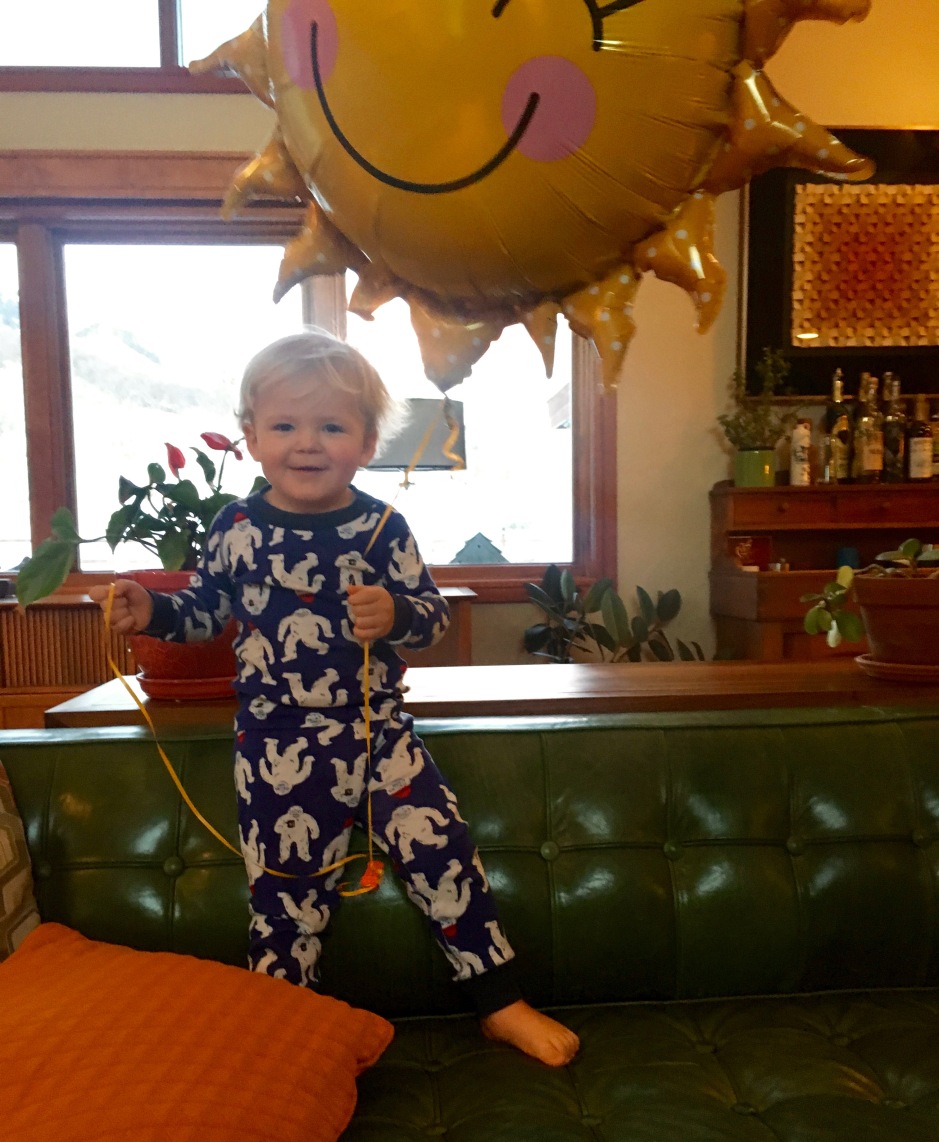 Toddlers wake up early, so we sipped coffee and took it slow for the morning. Oden opened a gift here and there and played with them. John made him a special birthday smoothie to go along with his breakfast. We usually do a bit of artwork after breakfast while Oden is still in his high chair, and for his birthday, I’d picked up a paper crown and some new art supplies like stickers and glitter. It was awesome to see Oden decorating his own birthday crown with my dad! 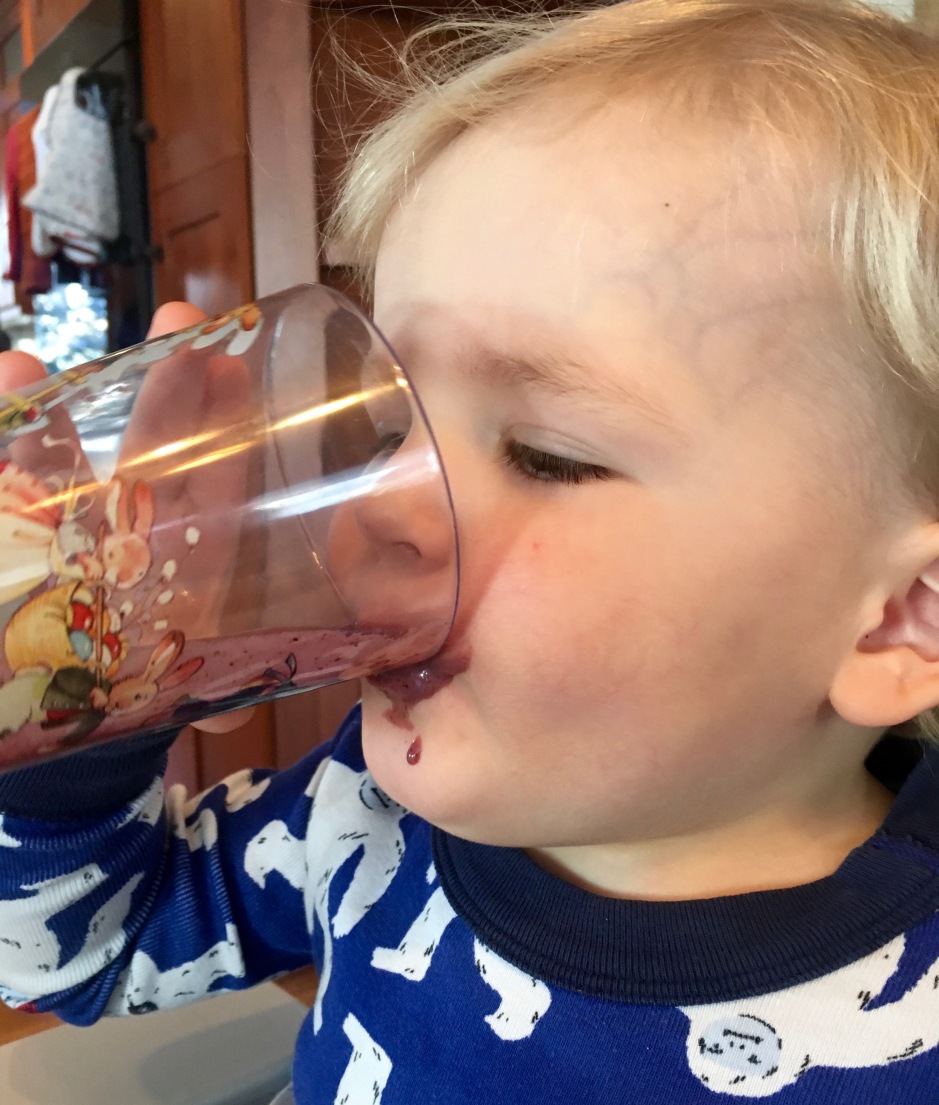 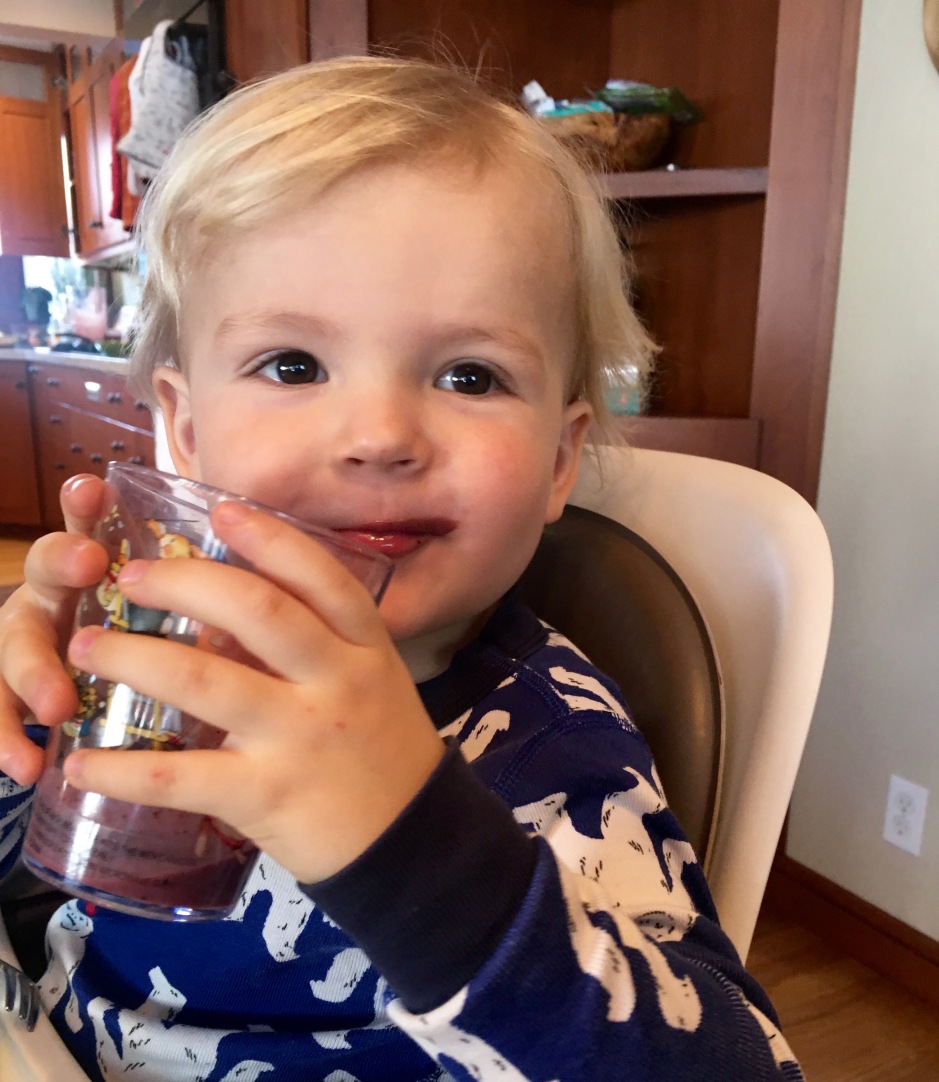 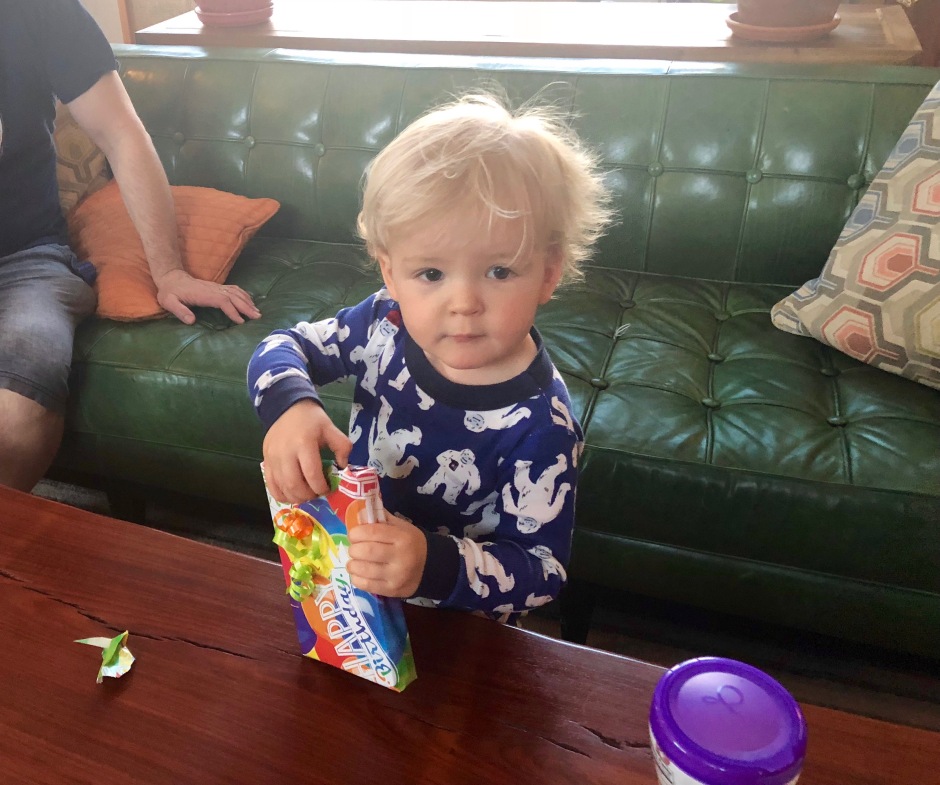 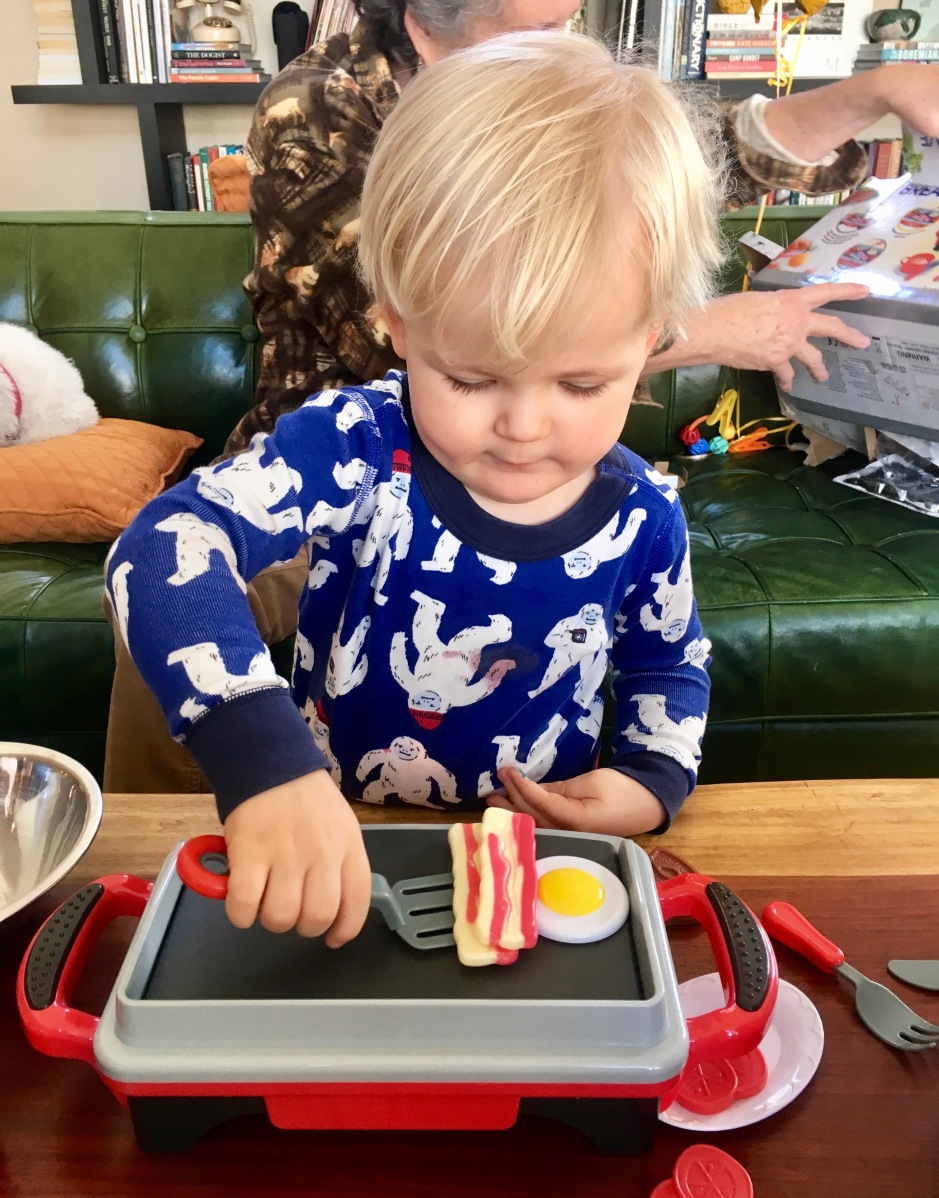 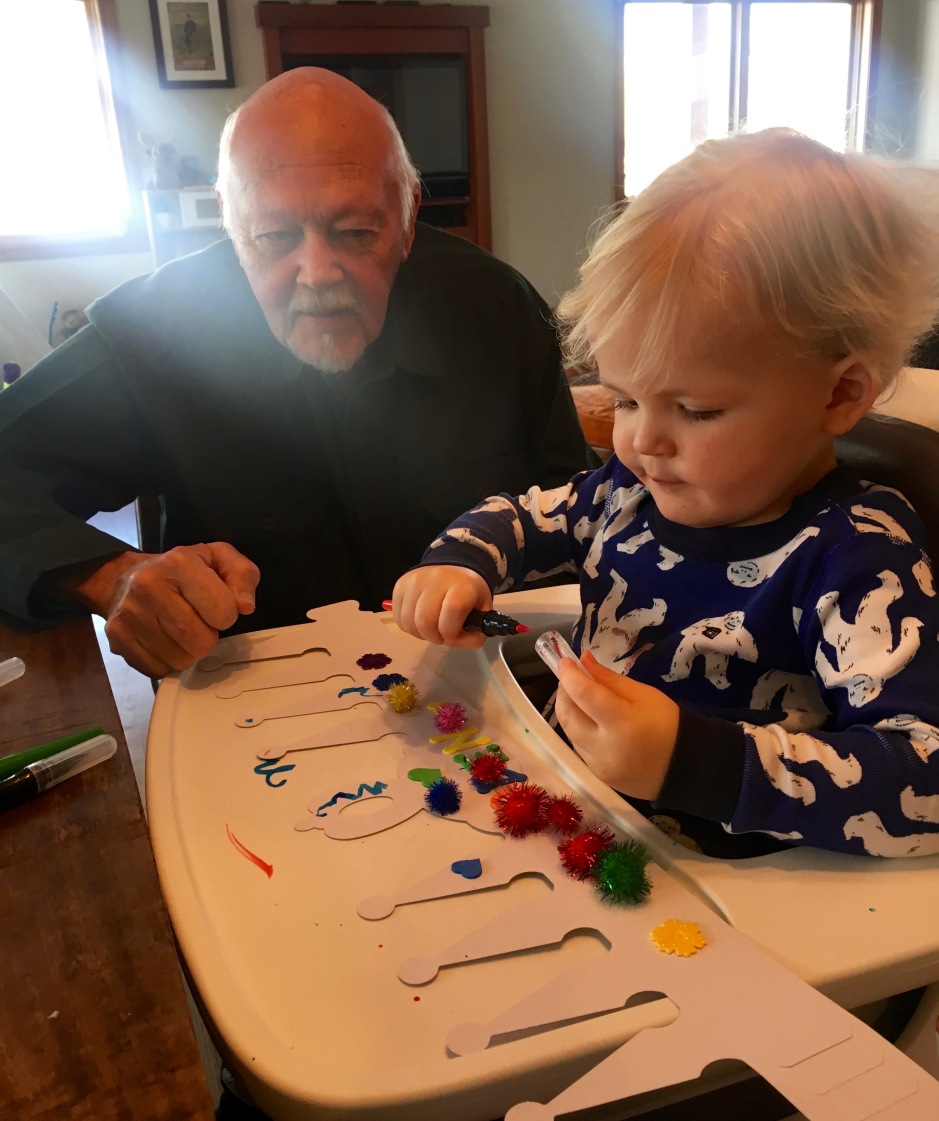 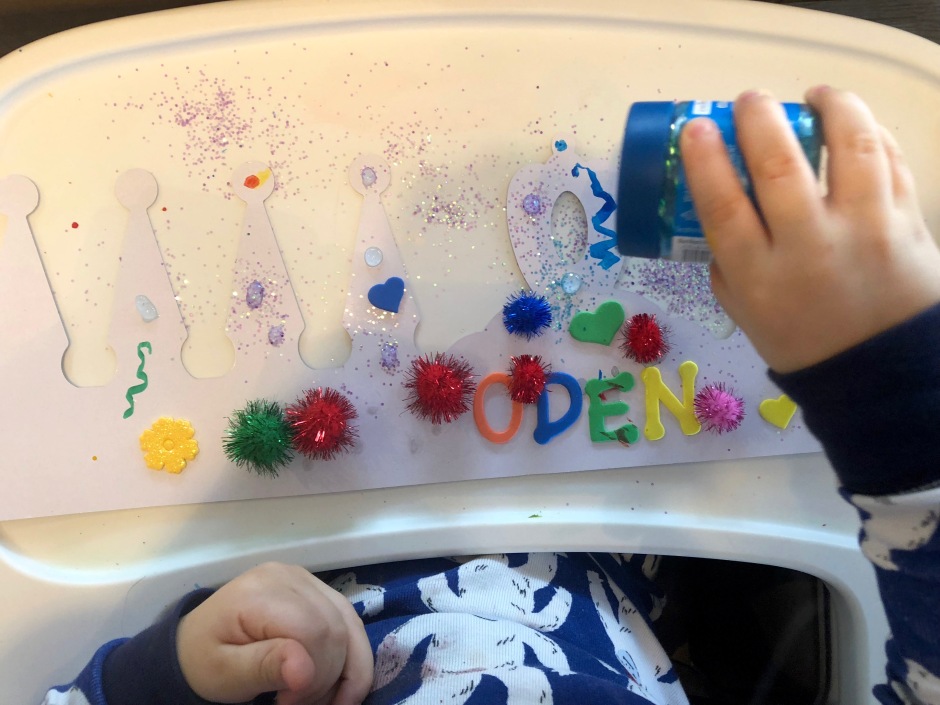 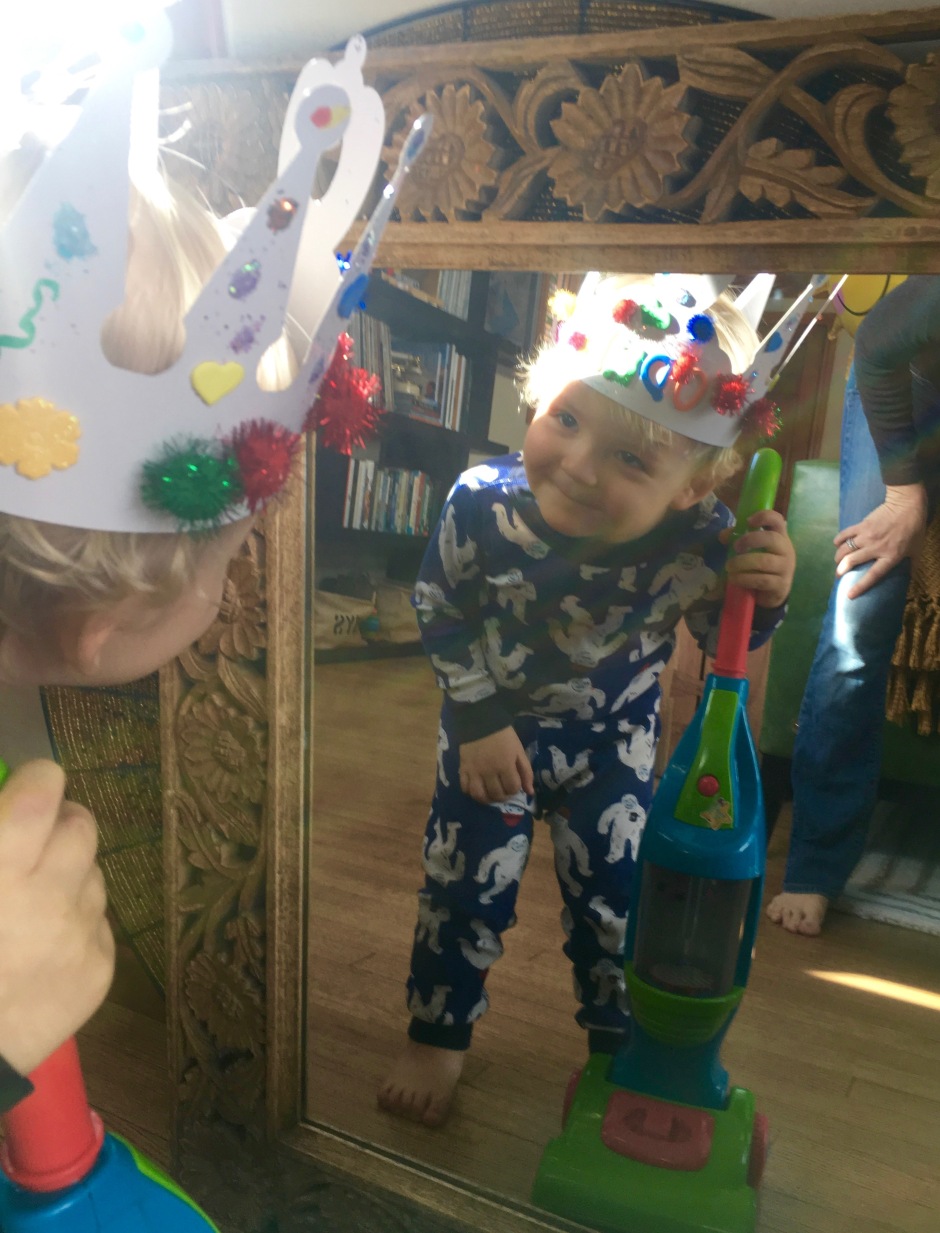 On Fridays, Oden has a Music Together class. I considered skipping it on his birthday since my parents were in town for such a short time, but they ended up just coming along with us. The class sang happy birthday to Oden and he kept running back and forth to Uma and Papa to include them! When we got home, our beloved nanny Tere came by with more balloons and probably his favorite birthday gift: a set of battery operated tools! My busy little bee got right to work. 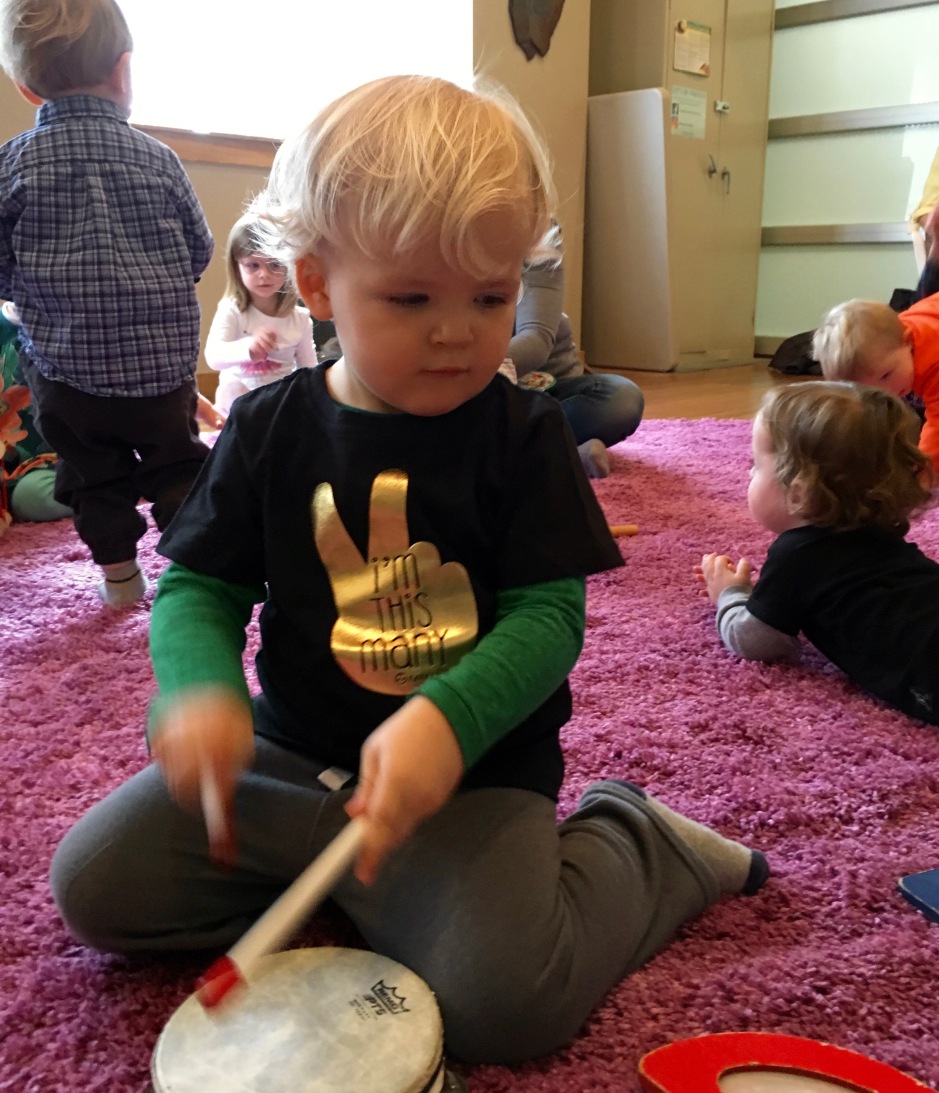 The big event for the day would come after his nap: a trip to a nearby town called Kamas to play in their amazing indoor pool! It’s somewhere I know we’ll go often but this would be our first time. I’d gotten Oden some water shoes and Uma brought him a new swimsuit and he even had a little floatie life jacket thing. Adorable.

Let’s just say the pool was a hit. It has big shallow areas and play structures and small slides for little ones. It also has a big slide for big kids! John and I got right into the pool with Oden, taking turns being at the top and bottom of the little slide and trying to make sure Oden didn’t drink too much pool water. My favorite thing was that every time Oden slid down the little slide, he would look around for other kids and raise his arms and shriek with joy, like, “ISN’T THIS AWESOME?!” John may have tested the slide himself once or twice. Me, too!

At one point, my brave little guy decided he’d like to try the BIG slide with Dada. I’d been watching other parents go down it with their tiny kids, lifting them up when they splashed into the pool with great control. I told John to do that. Well, when it came time to watch my boys slide down the big slide, they came careening around the final corner at Mach speed. John was desperately trying to control his speed but mostly failing and everyone fully submerged when they hit the pool. It was all fine and fun, but I suspect it might be a little while until Oden asks to go on the big slide again! 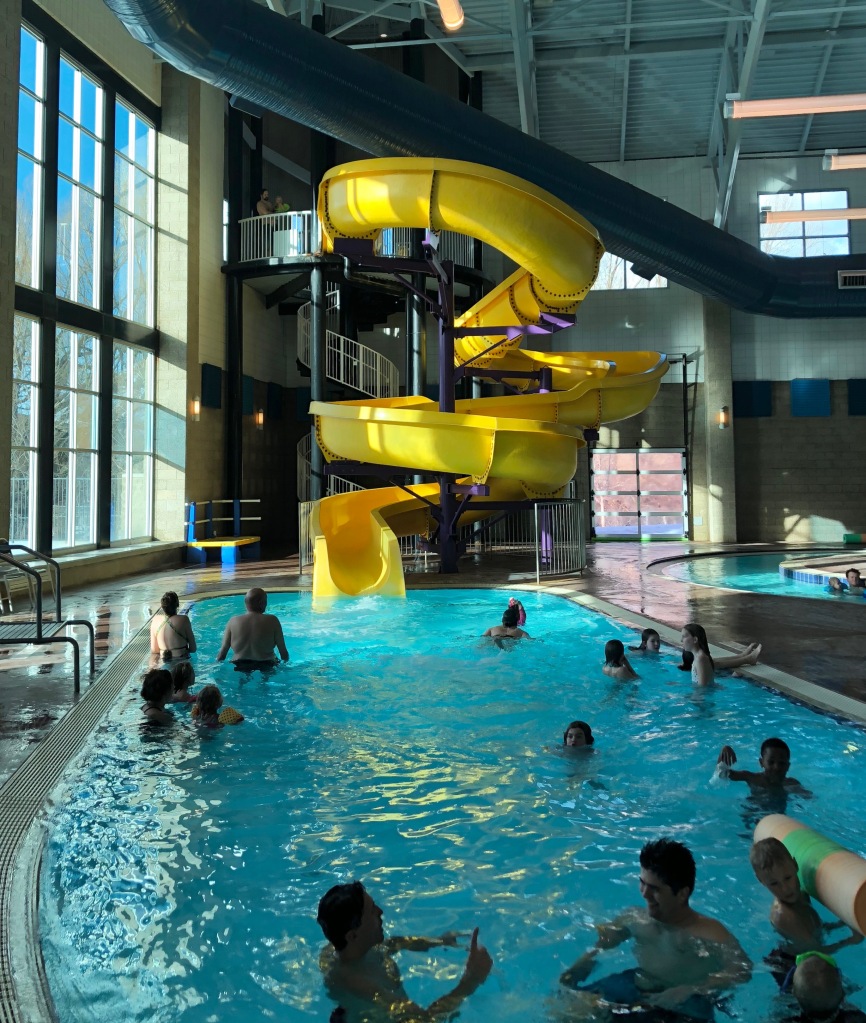 Not surprisingly, it was a tad tricky to lure Oden out of the pool to head home. He had dinner and it was time for the last special activity of the day: decorating his own cake! I’d baked a mini cake and frosted it earlier in the day and set out sprinkles and decorations for Oden to get creative. He loves “cooking” in the kitchen and it was adorable to see him gently add 4 sprinkles at a time to the cake with his little fingers. 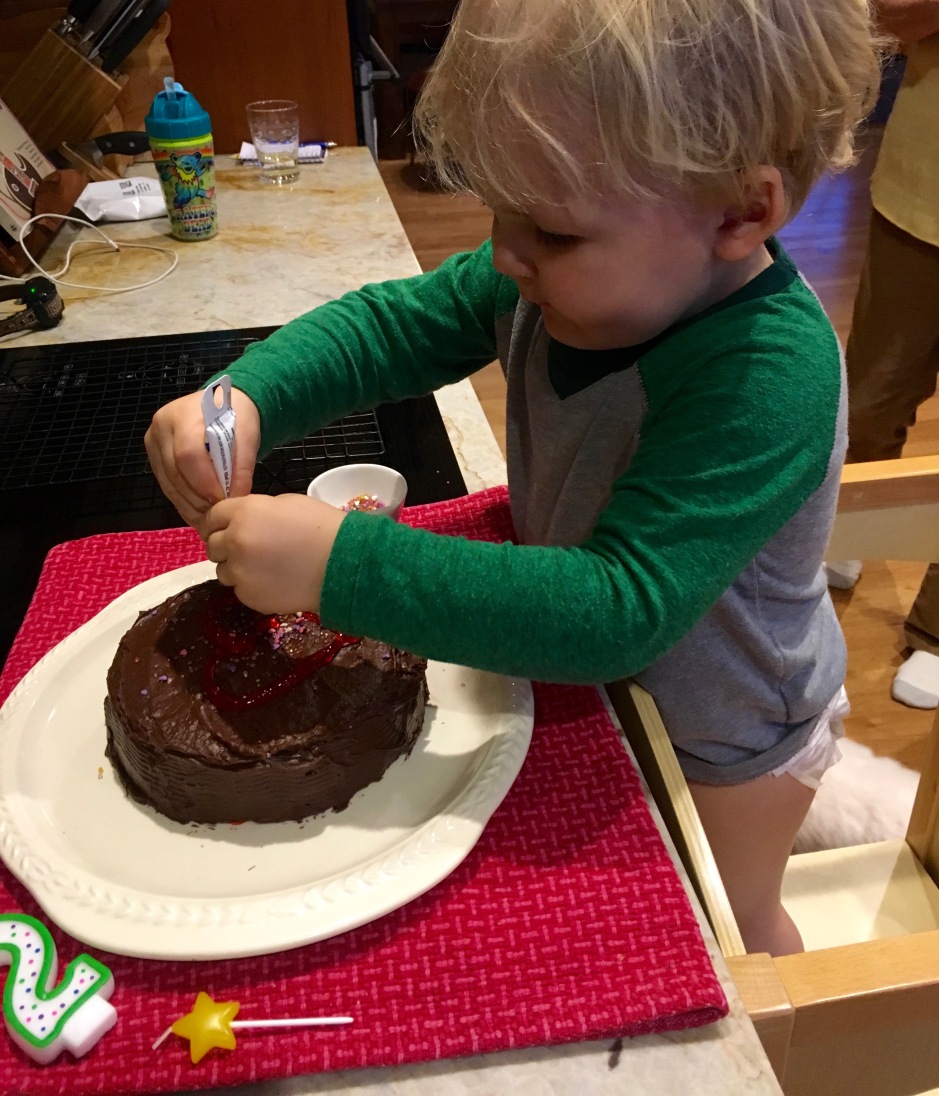 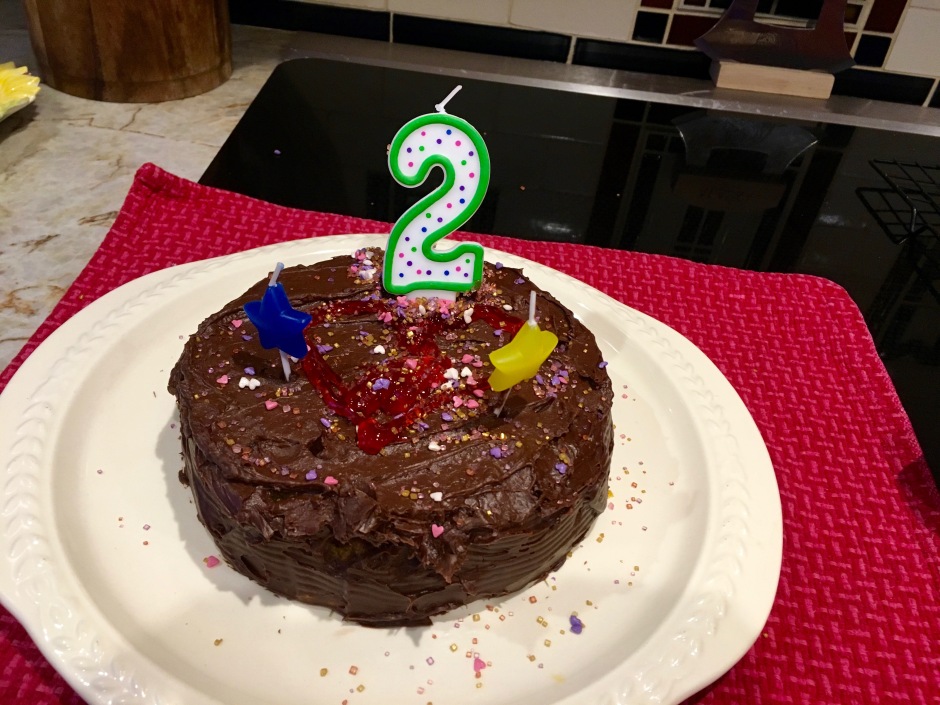 For the big moment, Oden wore his birthday crown and blew out three candles- one for each year and one for good luck. Having been to a neighbor’s party earlier in the year, he loves the birthday song and was all smiles! And, true to form, my big boy chowed his cake like a champ. Please note the tiny frosting crumb on the tip of his nose!

After Oden passed out for the night (no doubt dreaming of chocolate frosting and waterslides), I realized how tired I was, too! We’d kept it relatively mellow, but we did all sorts of fun things and the break from our routine was a lot of work! But as John and I clinked a glass with my parents over our take-out dinner, we all agreed that Oden had a very happy day. And there’s nothing more a Mama wants for her baby than to feel happy!

Happy birthday, sweet Oden! May this year bring all the joy you deserve!