I guess the most important thing I learned while making candy for the first time is that a meat thermometer and a candy thermometer are not the same thing. Once the temperature of my hot, sticky, boiling sugar reached a certain temperature, the display on the digital thermometer that I bought at the grocery store turned black from the heat and I was flying blind! Despite this, the batch of Bourbon Bacon Pecan Brittle I made turned out to be ah-mazing. Read on…

Our good friends, Shane and Kristen, love to host parties. They’ve had a get-together they call The Whiskey Social for 8 or 9 years each fall, requesting cocktail attire and providing signature cocktails with a bourbon base. Last year, we celebrated the beginning of the Christmas season at their holiday party. It was a fabulous way to get into the spirit, with a hired guitarist who played lovely music all night and led us in a Christmas carol sing-a-long toward the end of the evening. Our hosts even provided printed lyrics so everyone can join in. I adored looking around the room at a bunch of adults singing “Rudolph the Red-Nosed Reindeer” with child-like smiles on their faces, and RSVP’d “YES” as soon as this year’s invite came through. Plus, we rarely have a reason to get dressed up these days. Mama even wore heels!

In recent years, I usually make a batch of bourbon bacon jam to share as holiday gifts, and Shane loves it. Knowing his wife loves bourbon (and bacon) as much as he does, I decided to mix it up this year. I’d seen the recipe for Bourbon Bacon Brittle making the rounds on social media and took notes from a couple of recipes. Shane and Kristen’s party would be the perfect reason to try a new recipe (and attempt making candy for the first time ever)! To start, I basted a pound of bacon with Jack Daniel’s and sprinkled brown sugar all over it before baking it in the oven. The result was a salty-sweet candied bacon treat that I let cool before chopping it up for the brittle. I may or may not have snuck a bite or two- yum! The candied bacon alone is a holiday treat! 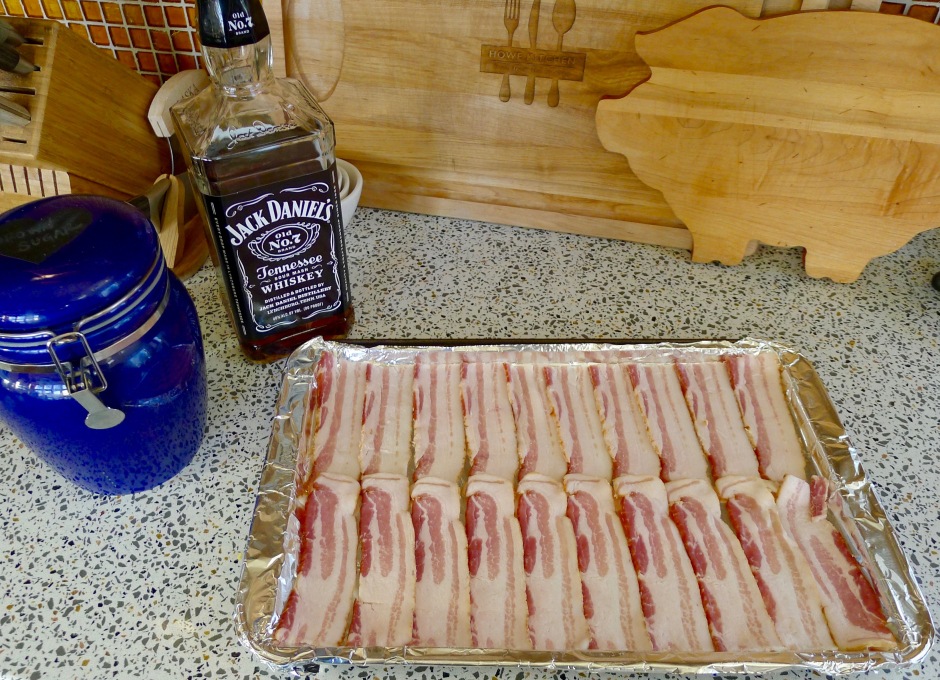 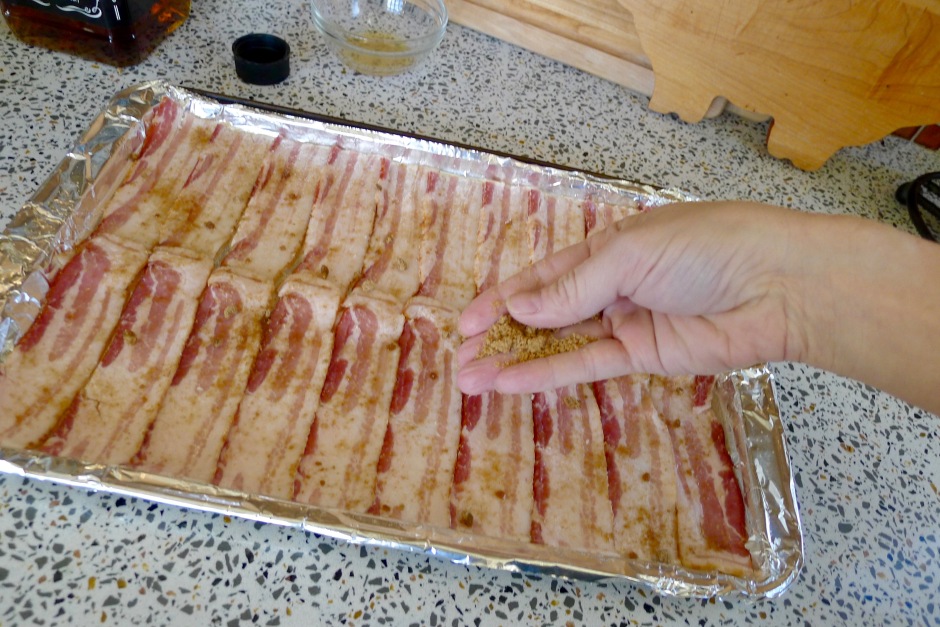 Next came the brittle part. I really am a candy-making novice, so I felt nervous from the get-go. While Oden napped, I dove in! I mixed water, white sugar, and light corn syrup in a sauce pan to dissolve and watched my thermometer rise to the appropriate temperature before removing the pan from the heat to add a full stick of butter and a big pinch of salt. 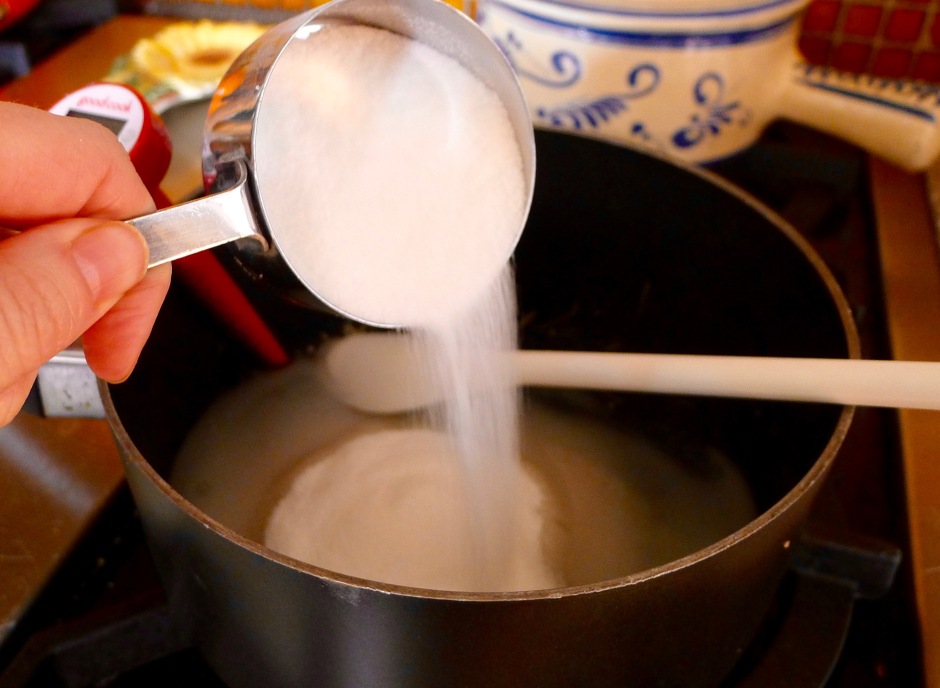 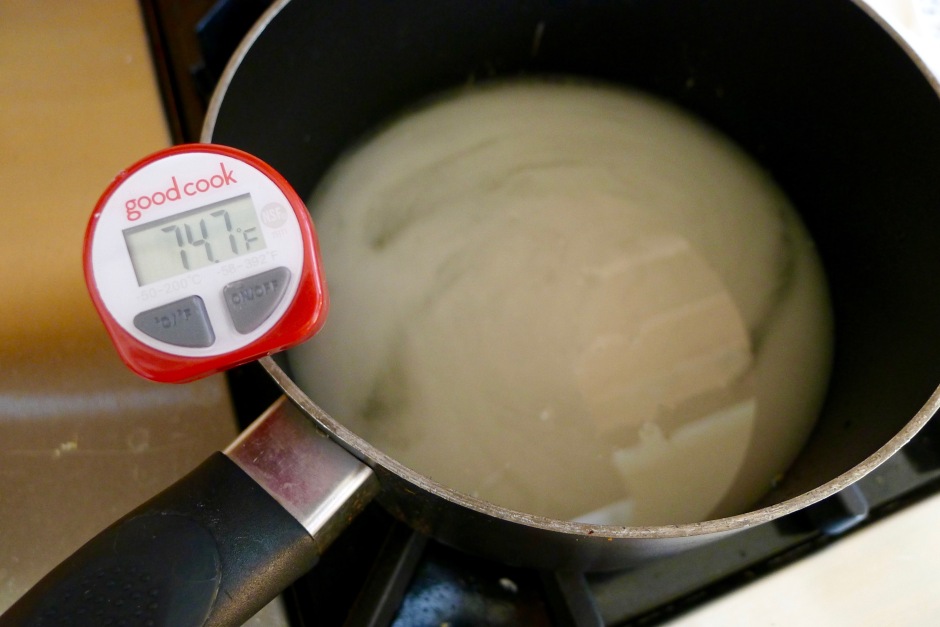 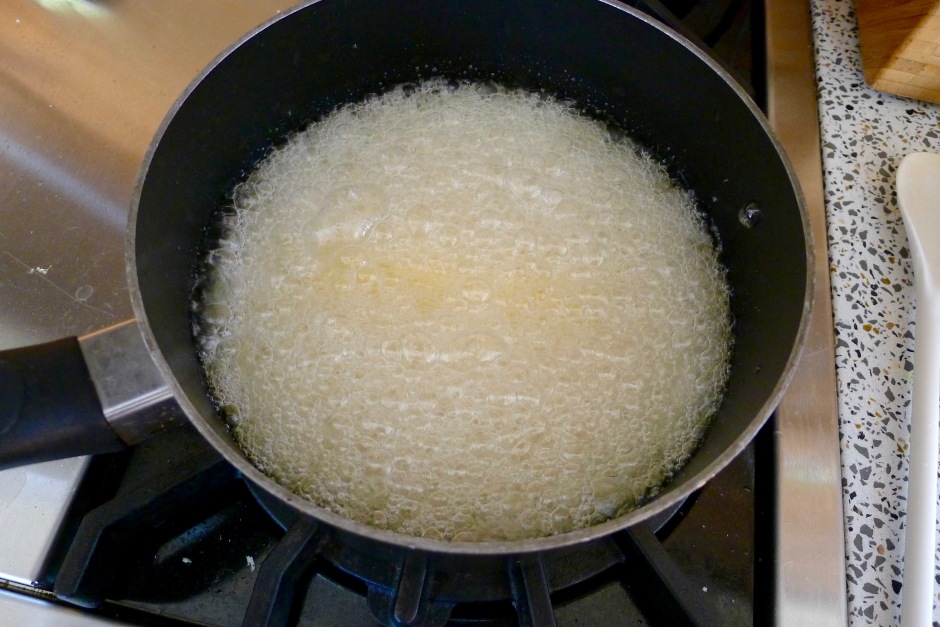 As the butter melted, I put the pan back on the stove as directed and added more ingredients: vanilla, bourbon, baking soda, the bacon, and some chopped pecans. 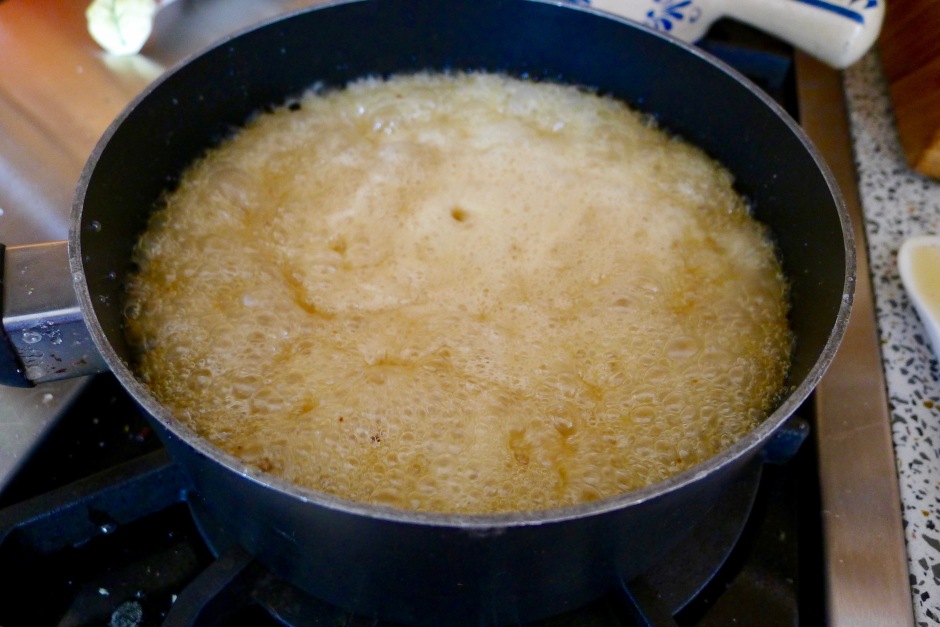 At this point, the thermometer display had turned black and I had no idea what temperature my boiling cauldron of sugar was. In addition to the temp, the recipe said to look for a deeper golden color, so I eyeballed it. When it was nice and dark, I poured the hot stuff all over my buttered, foil-covered baking sheet and spread it out quickly while the mixture was still hot. I wanted each piece to have lots of nuts and bacon in it, but you have to move quickly because the brittle starts to set almost immediately. 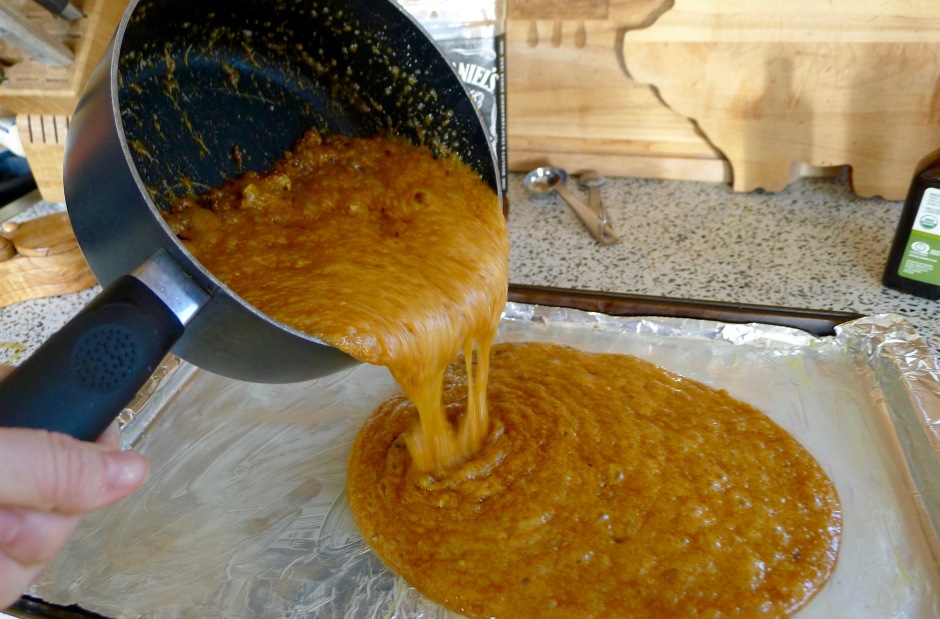 The whole process felt a little stressful, being my first time handling boiling hot magma liquid like this. But as I set the baking sheet on a back counter to cool completely, I thought the brittle looked pretty awesome. I tasted a bit of the candy on my spoon and YUM. All that was left to do is let it harden, break it into pieces, and wrap it up for the party! A few hours later, I checked on my brittle. It was still not hard enough to break into pieces, so I popped the whole tray into the freezer for the last hour before we left for the party. The cold brittle broke easily, and it was fun to whack it with a meat tenderizer! I packed it up and tucked a card inside with a description of the candy. Off we went. 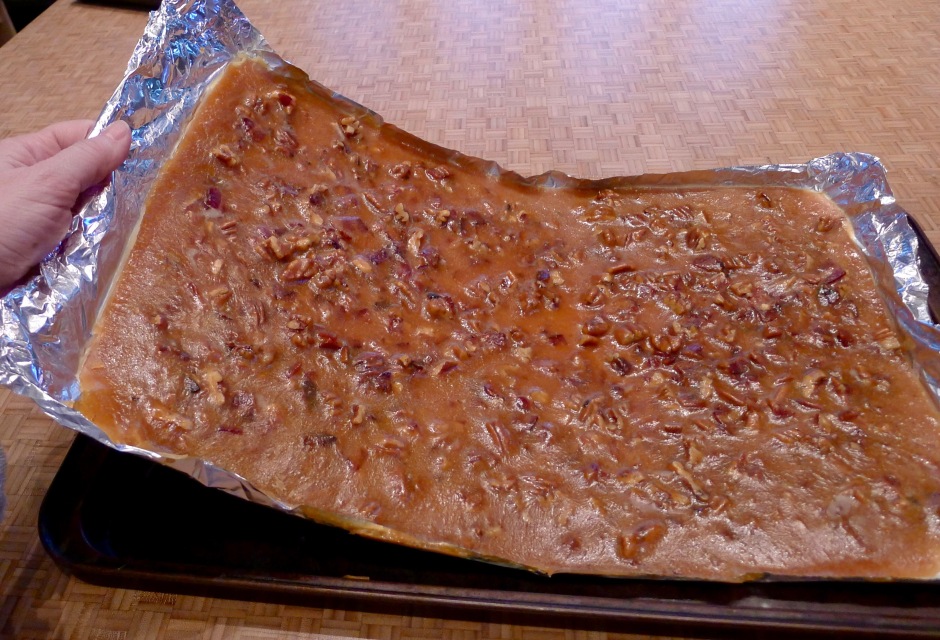 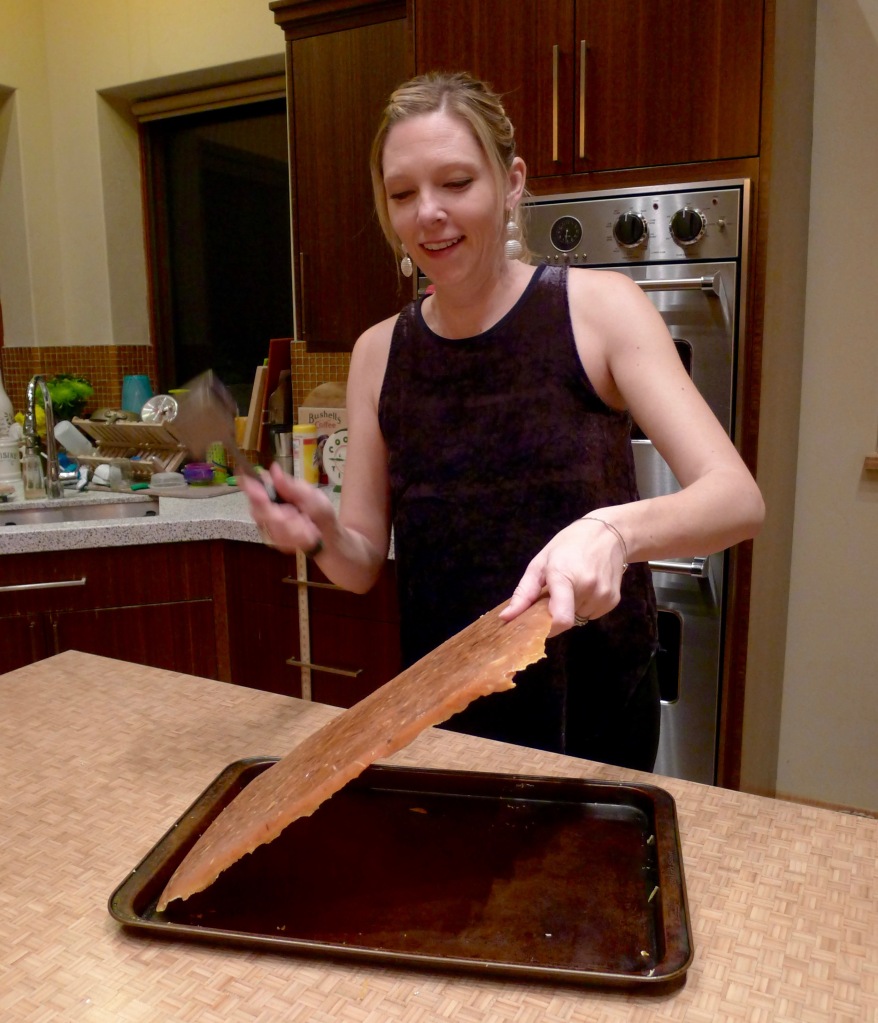 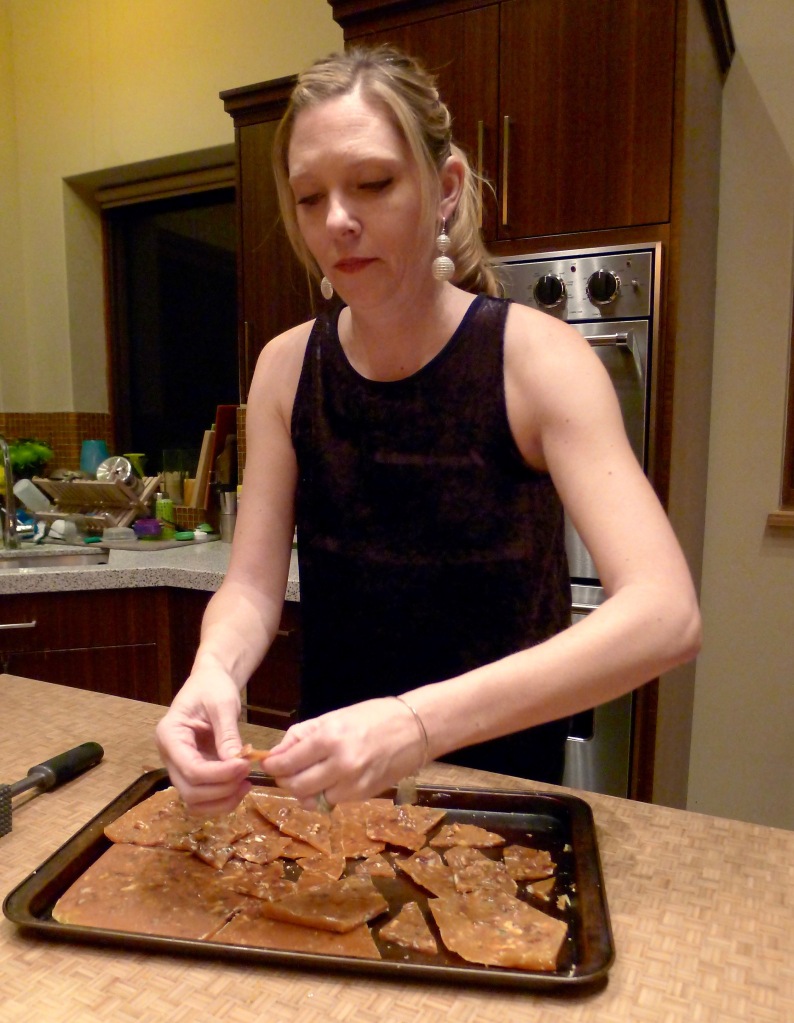 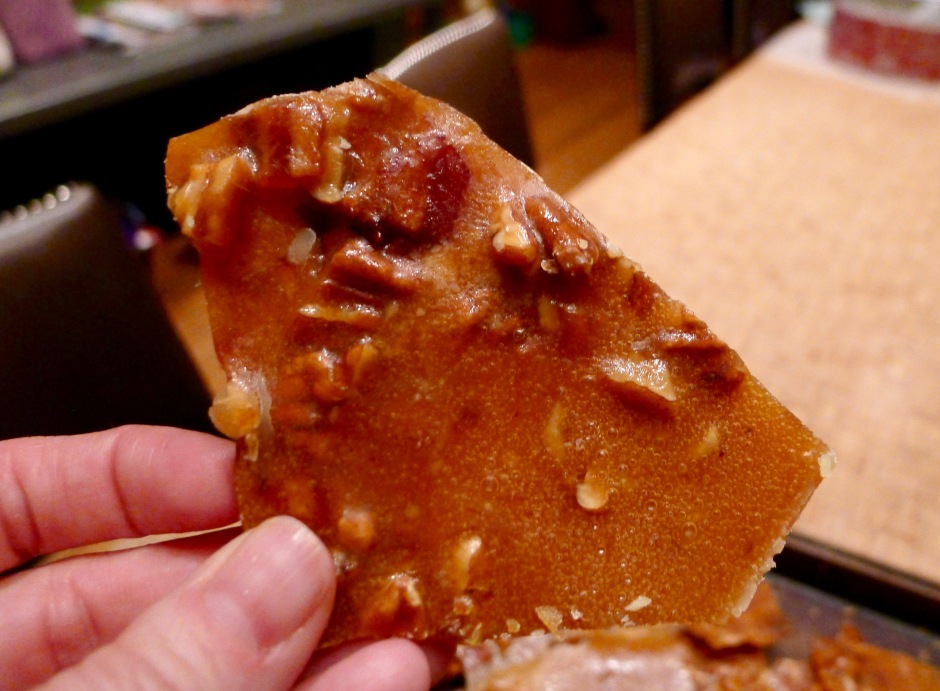 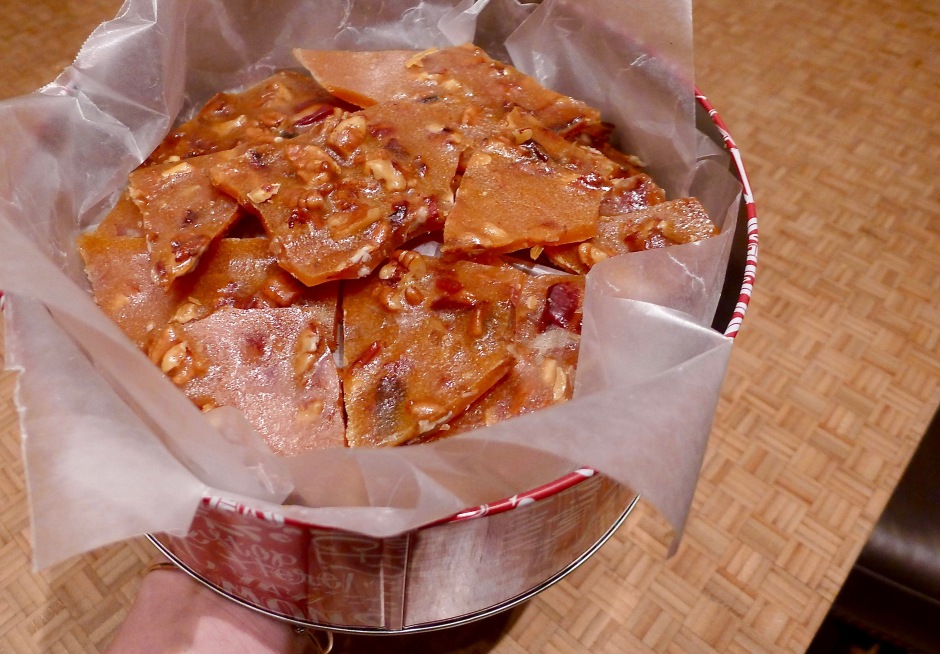 I must admit that John snuck a few pieces of the brittle before we arrived at the party. He also tried to scheme a way to hide it on a back table where no one else would find it, saving it for himself. During the sing-a-long, John’s mouth was so full of brittle that he couldn’t sing! It really is THAT good! Salty, sweet, nutty, warm, chewy, delicious. The fact that you can taste the bacon is fabulous, but it’s not weird- it’s wonderful. This candy is special, and it’s homemade, which makes it even better!

We had a blast at the party, enjoying a couple of warming homemade soups and plenty of appetizers other guests contributed. (My favorite was a pickle/cream cheese/salami situation that was simple and delish. I ate probably 10.) The next day, Shane texted me to say that a couple of friends who were also at the party came up to him at church and simply said, “Bourbon Bacon Pecan Brittle.” The recipe has been requested. It was a hit! And it’s absolutely a new holiday tradition around here! The only things I’ll do differently: breaking the pieces into smaller chunks and making a double batch. (You’re welcome, hubby.)

Bourbon Bacon Pecan Brittle  (Recipe tweaked from this one)

For the candied bacon, you’ll need:

For the brittle, you’ll need:

Heat your oven to 375 degrees and line a baking sheet with foil. Lay the strips of bacon on the foil. Brush with 3 tablespoons of bourbon and sprinkle with brown sugar. Bake for 10 minutes or so, until the bacon is bubbly but browning. Let cool completely before chopping into chunks. Set aside.

Line a baking sheet with foil and butter it well. In a medium saucepan, heat the sugar, corn syrup, and water on medium-high heat for about 10 minutes (candy thermometer reading 260 degrees). Remove the pan from the heat and add the stick of butter and pinch of salt. Return it to the heat and let the syrup cook about 5 minutes more, until golden (temp reading 285 degrees). Add the bacon, vanilla, bourbon, baking soda, and nuts. Stand back! Cook and stir until the mixture is a deep brown (temp reading 300 degrees).

Immediately pour the mixture on to the buttered baking sheet. Tilt the pan and spread the mixture around to get bacon and nuts evenly distributed. Set aside to cool completely before breaking into brittle bites. Pop the pan into the freezer to speed the cooling process along. Be prepared to share the recipe and don’t be surprised to find brittle hidden in your husband’s coat pocket. Yum!

More deliciousness can be found on the FOOD BLISS page!