…And in with the NEW! I’m not sure how it’s possible, 2017 is here. Time warp! Somehow, I’ve jumped from a Thanksgiving recap straight to New Year’s Day. The end of this year has been a blur, but I’ll bring you up to speed on all of it soon! Oh, 2016. Some people were mad at you. Some people struggled with you more than other years. Some people wanted you to be over with, as if things magically change on January 1. I know better than to think things might go from glum to sparkly overnight because of the date on the calendar. Bad things happen every year, and so do good things. It’s up to us to choose which to focus on. It’s easier said than done, to be sure! 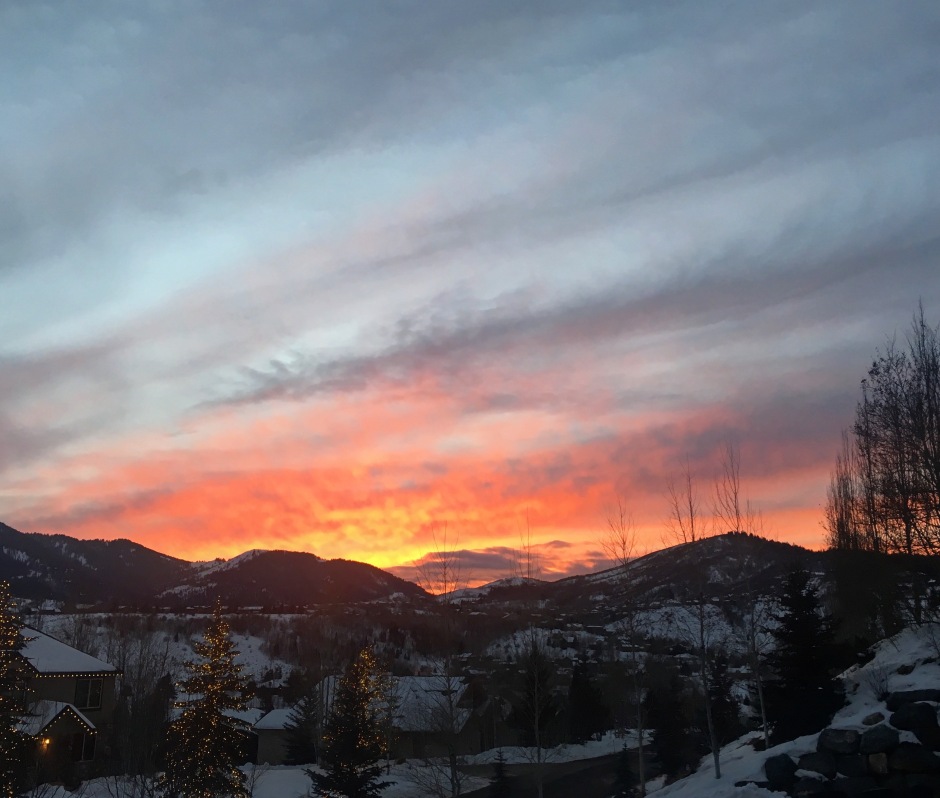 In my own little bubble, 2016 was simultaneously the best and most challenging year I’ve lived. This year, I became a mother, a title I didn’t think I’d ever have. Sweet Oden is quite literally the most meaningful thing in in my life. He is a miracle, and his entrance into this world changed everything, as it goes with babies. I feel so very lucky to be chosen to be his Mama. But this year was also full of extremely difficult times: relationship struggles, health issues, family drama, significant illnesses, shocking accidents, confusion, and heartache. Big, keep-me-awake-at-night stuff! I’ve wondered more than once how much someone can handle before they reach the breaking point. I’ve also wondered if I have, in fact, reached it a few times.

Tomorrow, I turn 42 years old. 42! I suppose that sounds old to me on some days, until I remember that I gave birth this year. I don’t get to be “old” anytime soon! I have a strong-willed, newly-mobile son to chase around this world to keep me healthy and young, and if we’re lucky, a brother or sister will join him in his shenanigans at some point. There’s nothing like a baby to keep things going. On my most emotional or trying days, I don’t get to hole up in bed with the shades drawn or cry in the corner. I have to pull myself together somewhat, add a smile to my face and my voice, and focus on Oden’s needs and happiness. It’s not easy, and there’s no break, which makes it harder…but it’s amazing how one giggle from a chunky, innocent 9-month-old can immediately warm your heart!

As I reflect on the past year, my heart goes out to family and friends, even strangers, who are struggling with far bigger things than I am, like cancer and loss of life. It changes the way I look at things around me. I started this site years ago as a personal reminder to myself to keep a healthy perspective, to be grateful for this life I’ve been given through good times and bad. Does seeking out the “bliss bits” in life make the hardships and pain go away? Of course not, and sometimes it feels impossible to find a bright side and trivial to focus on little things with so much going on. But it still serves as the reminder I needed it to be: life is good, even when it’s bad.

The last few weeks of 2016 had me praying for the new year to hurry up. I received call from my mom with news of my grandfather in the hospital and serious health issues for my uncle. I hung up the phone, leaned over to pick up my big baby, and fell to the ground with a back injury that would keep me in bed and unable to lift anything, including Oden, for a week. Then we learned that my uncle had sustained a bad fall on his anniversary trip and awaited surgery for a broken back. Did I raise my eyes toward the sky and whisper, “REALLY?!” Yes! But we rallied to host our family for the holiday. Christmas and John’s birthday were chaotic and fun (I’ll share all of the details soon!), but also underlined with a jumble of emotions. 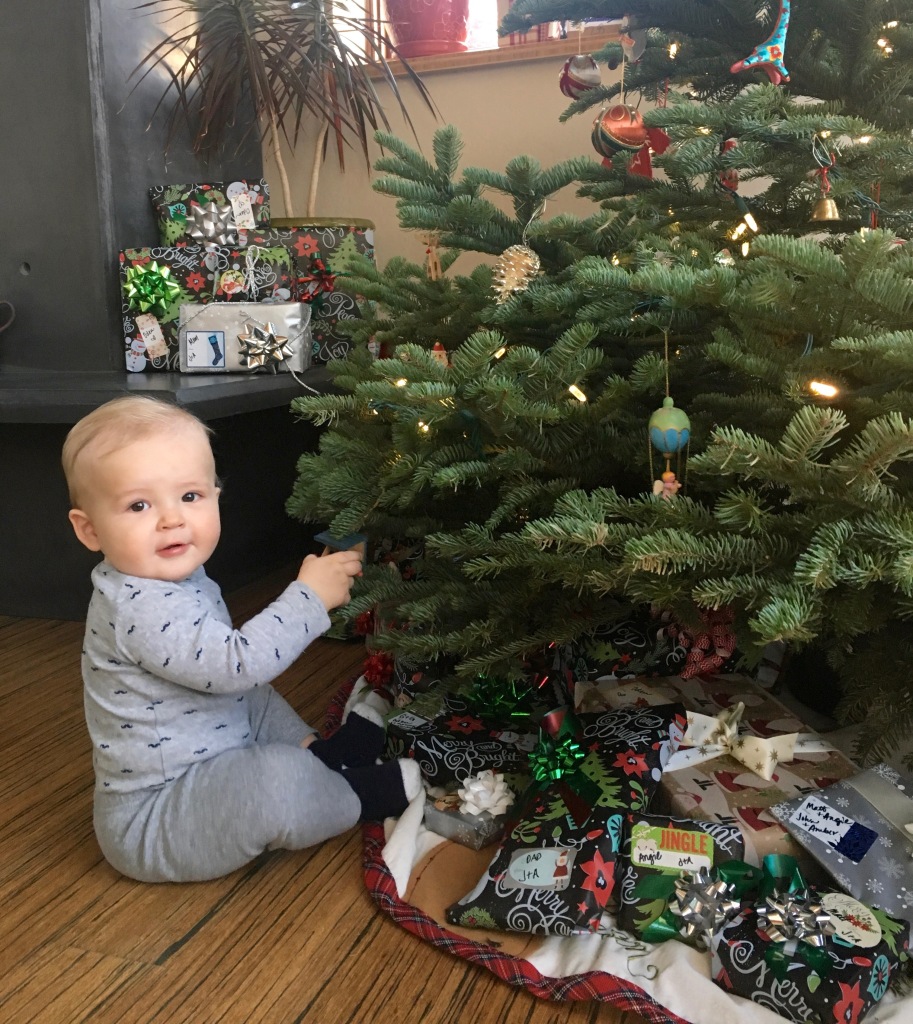 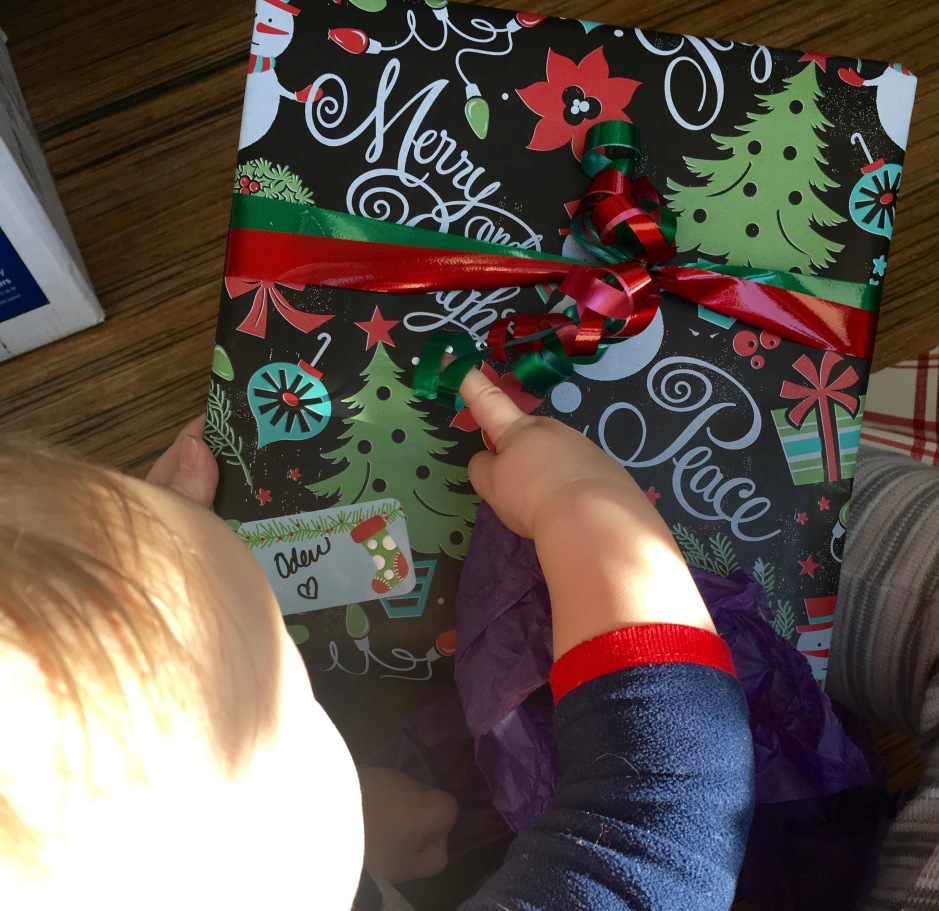 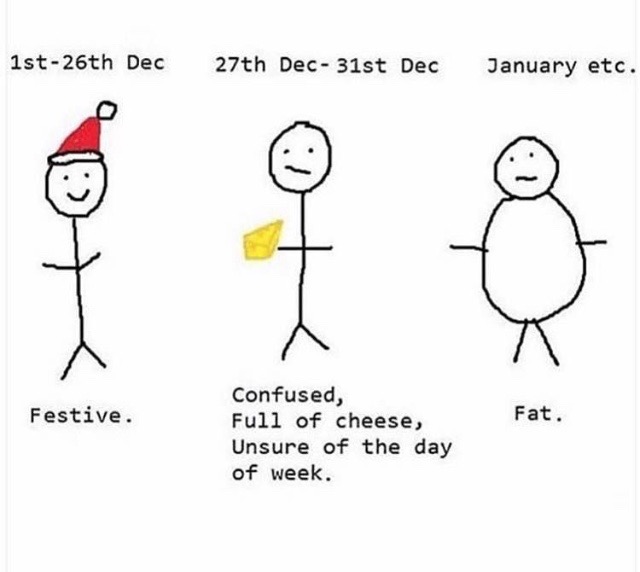 Thankfully, it sounds as if the health issues in my family have stabilized somewhat. There’s not much to be gained by becoming overwhelmed with worry, so I’m trying to remember in those hard moments to take a breath and say a prayer. In truth, the last couple of days have been better than most in my recent memory. Oden learned to crawl (!) and is busy standing up in his crib every chance he gets. I’ve gotten out on sunny winter walks in the ‘hood with Oden and Cholula and had a fantastic family afternoon laughing with friends who have twins, stuffing all three babies in a sled and trekking them down a snowy road with our three dogs galloping around. My evenings have included things like cooking my delicious meat sauce from scratch, soaking in a bubble bath, baking cookies, and catching up on favorite shows with John under a blanket with a glass of wine. Oden indulged his Mama by being his most adorable for some New Year’s Eve photos I’ll cherish forever. Did I make it to midnight to ring in the new year? Nope! We ate a big pasta dinner, watched the baby monitor and a TV show, and I was over it by 11. But I woke up with a few extra hours of sleep under my belt today, thanks to my hubby stepping in this morning, and feel ready to greet the new year with optimism. 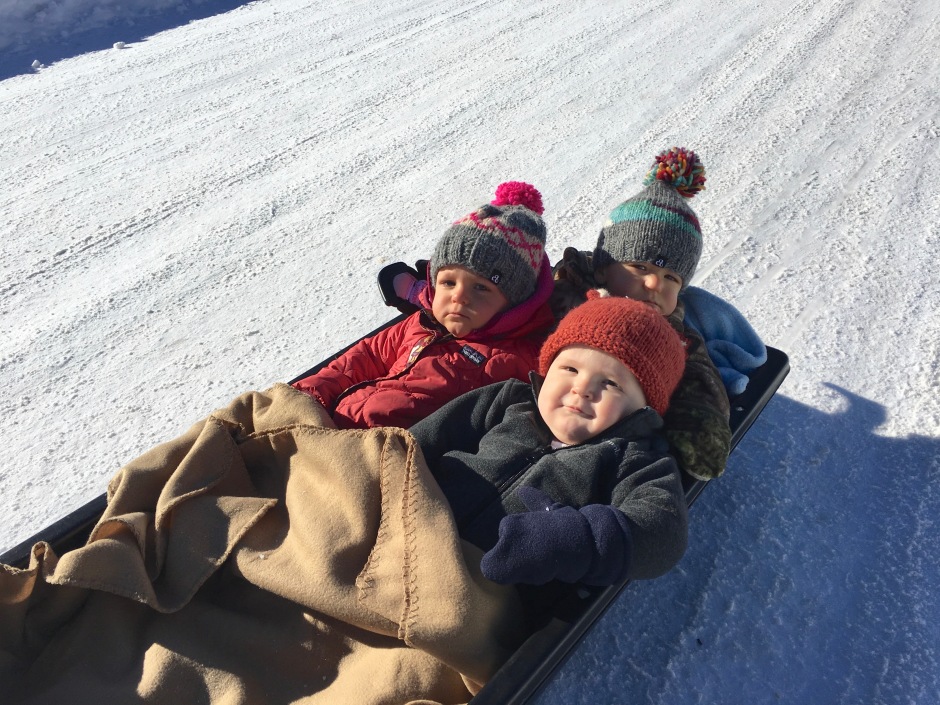 I’ve moved away from traditional resolutions over the last couple of years, opting instead for general goals and a promise not to be hard on myself if I don’t quite make it. I’ll spend the next day or two thinking about those intentions for the year, which will include things like giving back to our community and finding regular ways to show love to people around me (whether I know them or not). But at this moment, as I sit in my jammies with lukewarm coffee, three things are flashing in my head that will be my focus: my health, my family, and more joy. 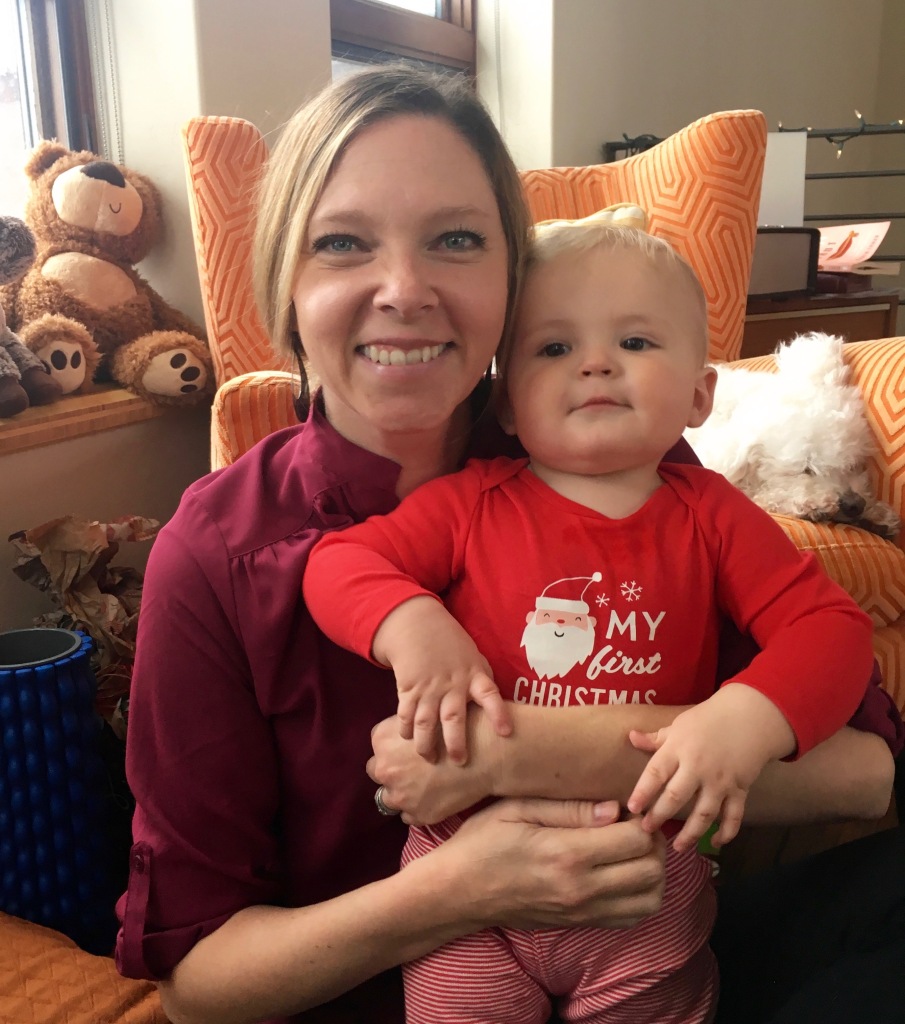 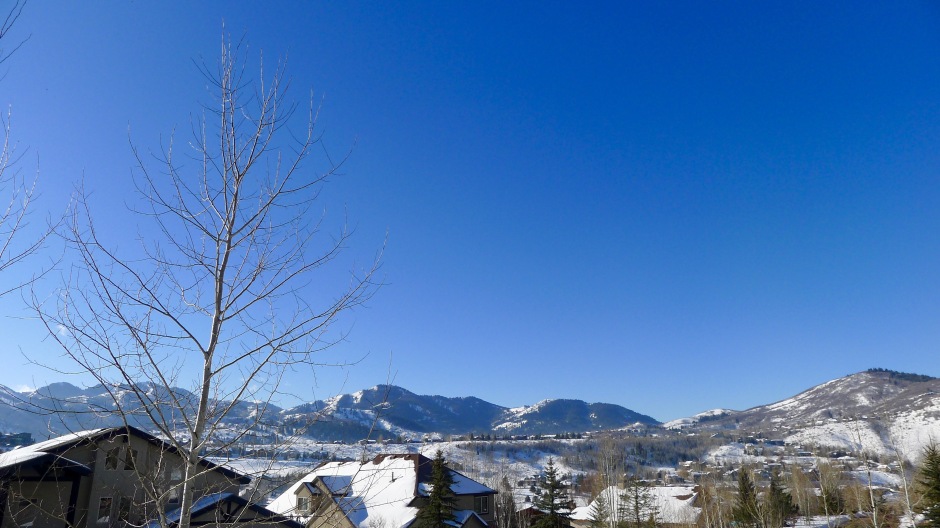 Farewell, 2016, and all of the memories we’ve made together (good or bad). There’s a new year in town, and the sun is shining brightly.

Stay tuned for a recap of the madness of Oden’s first Christmas season!