On the flight home from Baja (I promise to share that trip soon!), John stopped me as I was flipping through a magazine to point out a recipe for Shepherd’s Pie made in a crockpot. It felt odd to be thinking about hearty comfort food after a week of lounging in a sunny pool, but we knew we were returning to sweater weather at home. I ripped out the page for later. Within a week of being home (with slippers secured to my chilly feet), I made some tweaks and additions to the recipe and ended up with something scrumptious.

Traditionally, a Shepherd’s Pie (or Cottage Pie) was a way to use up leftover meat, a casserole with a mashed potato crust. Modern versions include veggies and all sorts of variations in flavor. We love to make a pie using leftovers from Thanksgiving dinner: turkey, stuffing, corn, gravy, even cranberries…and, of course, the mashed potatoes. This recipe is sort of a deconstructed version of the traditional casserole, but all of those tasty elements are there! 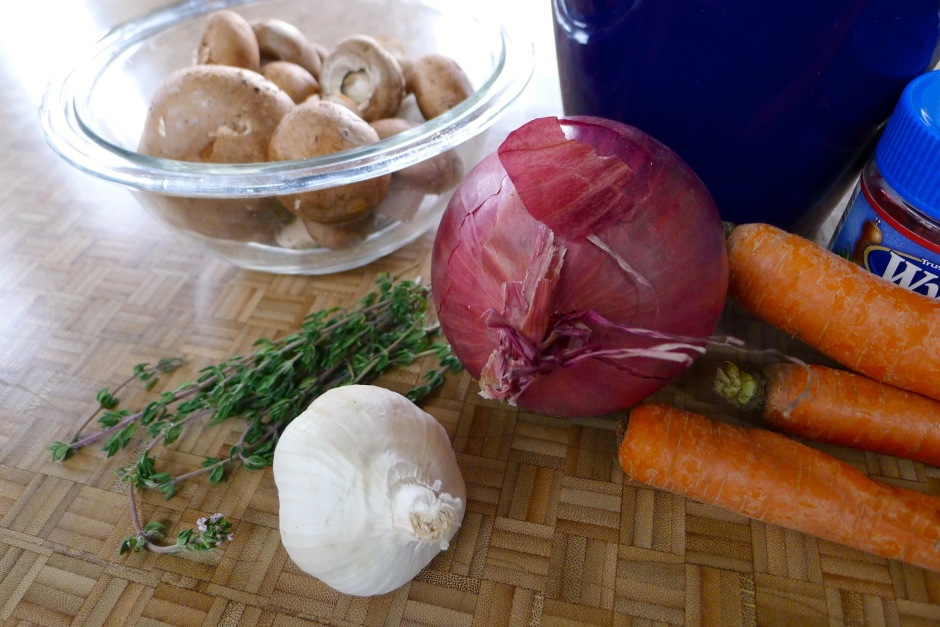 I learned recently that the cut of meat is pretty important to a crockpot recipe. (I tried to make a fall-apart roast but it ended up tough because it didn’t have enough fat in it!) This time, I used a chuck steak with plenty of marbling so that over the hours of cooking in the crock, it would become nice and tender. I chopped it into big bite-sized pieces.

I wanted plenty of veggies in the dish, so I also chopped up some carrot, onion, and big brown mushrooms. I tossed them into the crockpot with the meat. The joy of slow-cooking: it’s SO EASY. 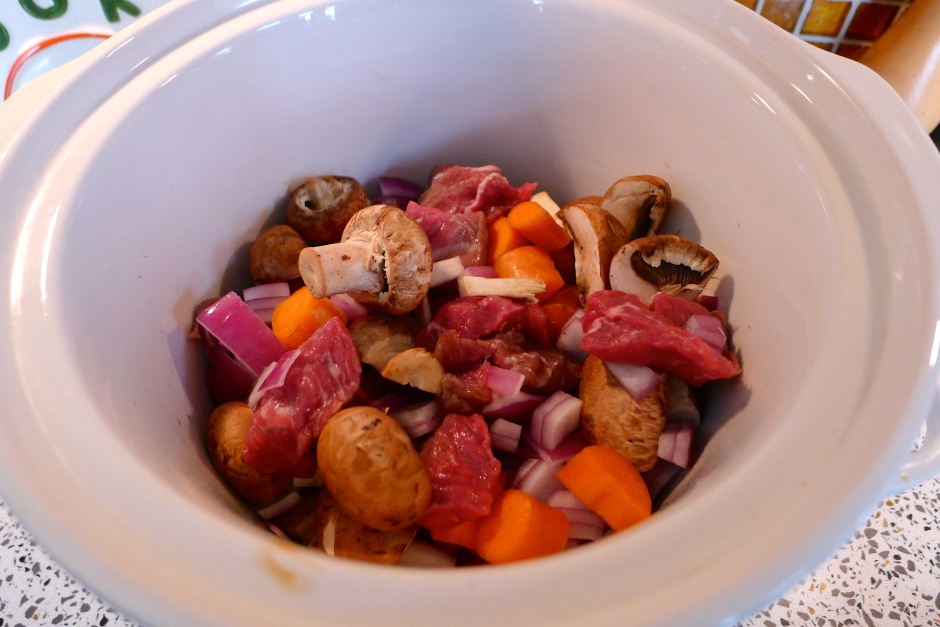 To get the saucy gravy started, I mixed water and a beef bouillon cube (I was out of beef stock), Worcestershire sauce, and a couple of spoonfuls of tomato paste. I poured the sauce right over the meat and veggies. I also tossed in a couple of smashed garlic cloves, sprinkled in a little flour to thicken things up, and added flavor with a few sprigs of fresh thyme, a bay leaf, and salt and pepper. Last, I poured in a cup of red wine. I switched the crock to high and left it on the counter all day to make supper for me. 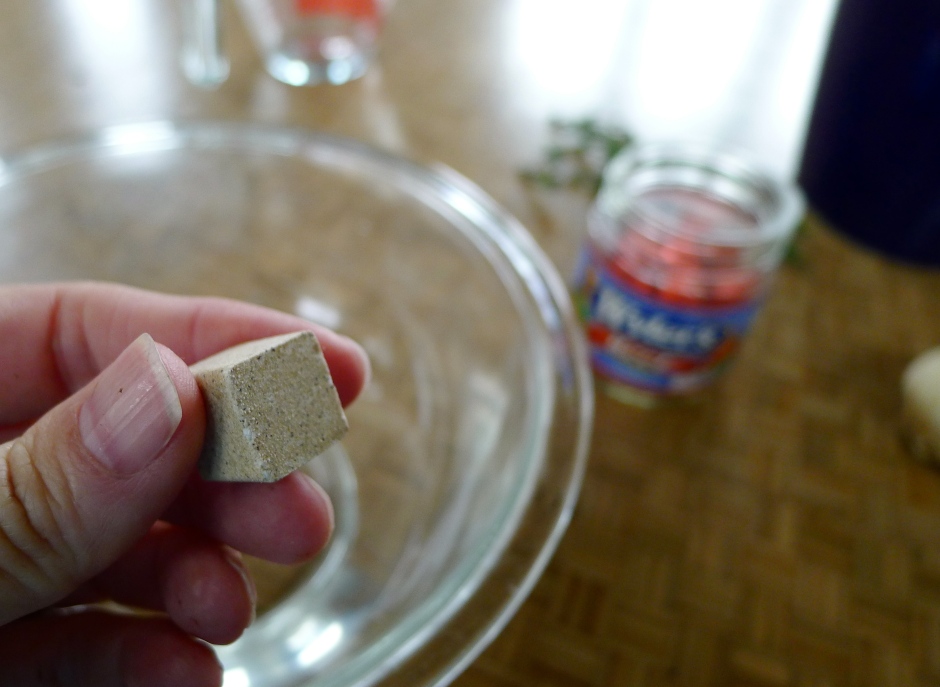 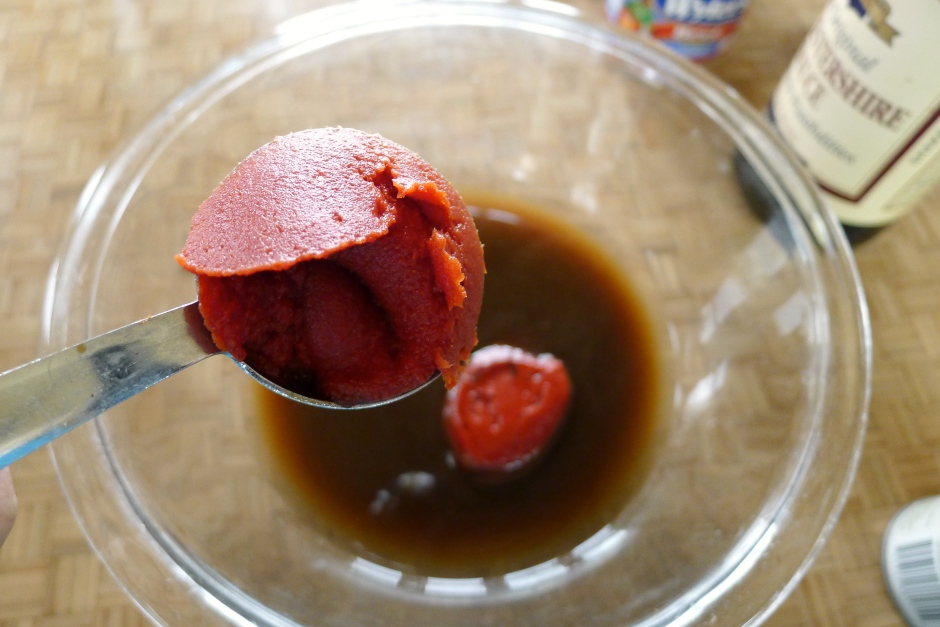 I gave the mixture a stir every now and again over the next 4 ½ hours. The contents of the crock smelled amazing! When it was getting close to chow time, I made a simple batch of mashed ‘taters using Yukon gold potatoes, a splash of milk, a big dollop of butter, and salt and pepper. I also sliced some bread to toast. 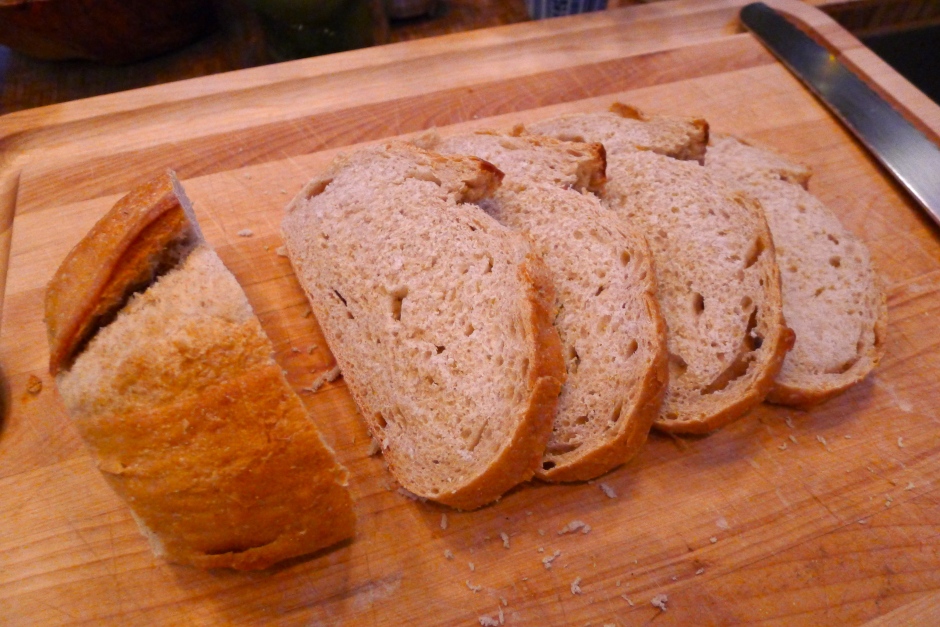 To finish off the meat-and-veggie party, I added about a cup each of frozen peas and corn. No need to thaw them first! I remembered to fish out the thyme sprigs and the bay leaf. I also snuck a taste to check the seasonings and added a bit more salt and a splash of water to cut some of the richness. Perfect! 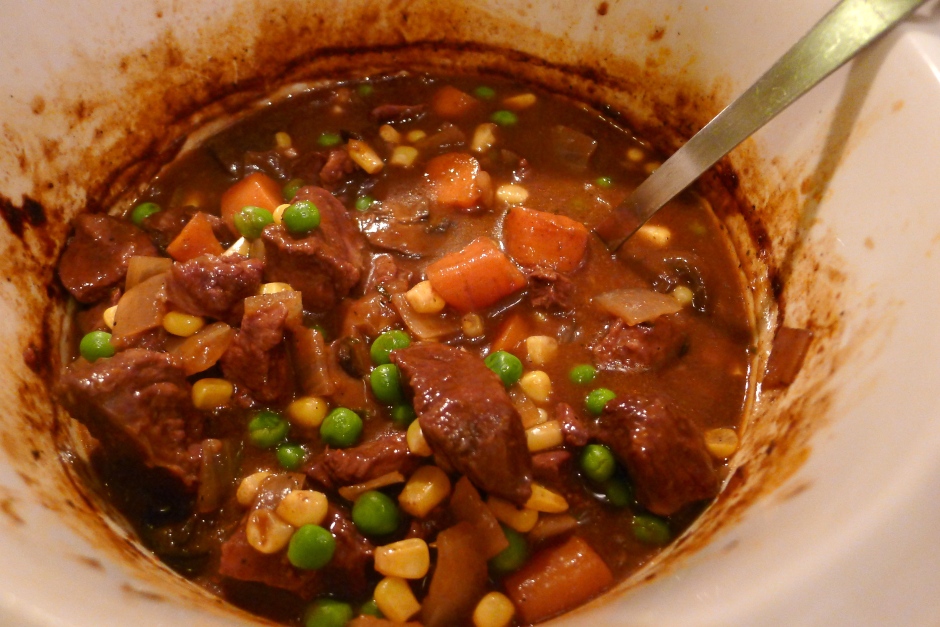 To serve, I piled a scoop of mashed potatoes on each plate and ladled plenty of the saucy meat and veggie mixture on top- sort of an upside-down Shepherd’s Pie with the potatoes on the bottom! We used the crusty bread to dunk in the sauce as we ate. 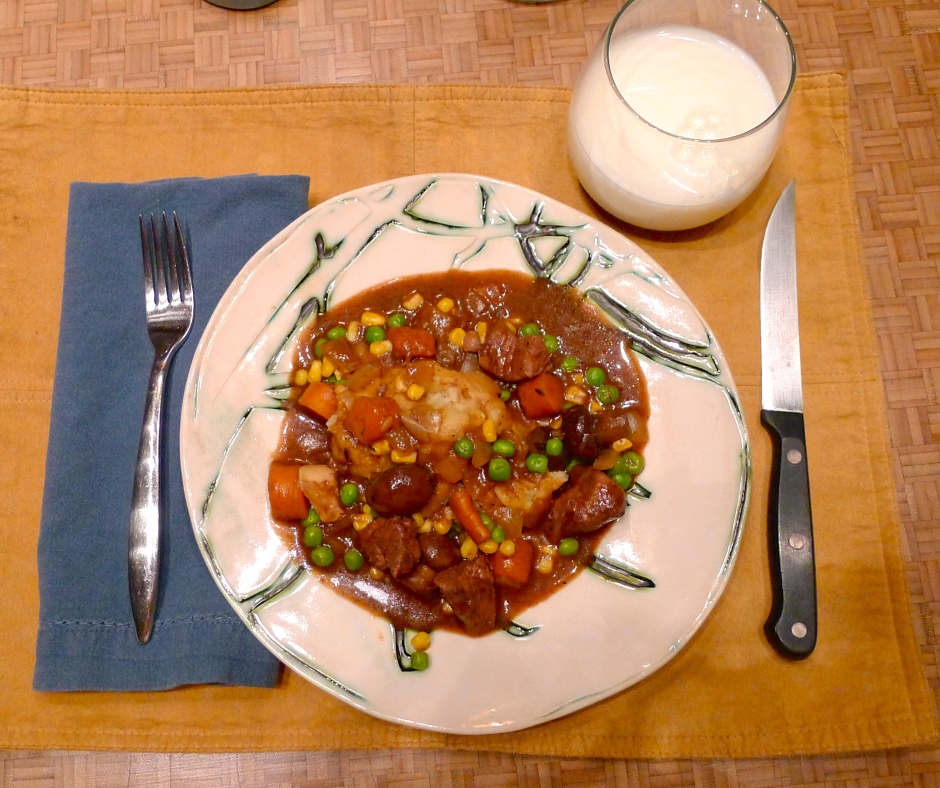 Talk about comfort food! The flavors are similar to a hearty beef stew. The sauce is beefy and rich, mixing delightfully into the buttery mashed potatoes. The meat is perfectly tender- I was able to cut the larger chunks with my fork. I liked having so many vegetables on the plate, too! The toasty bread is key for scooping big bites into your mouth. 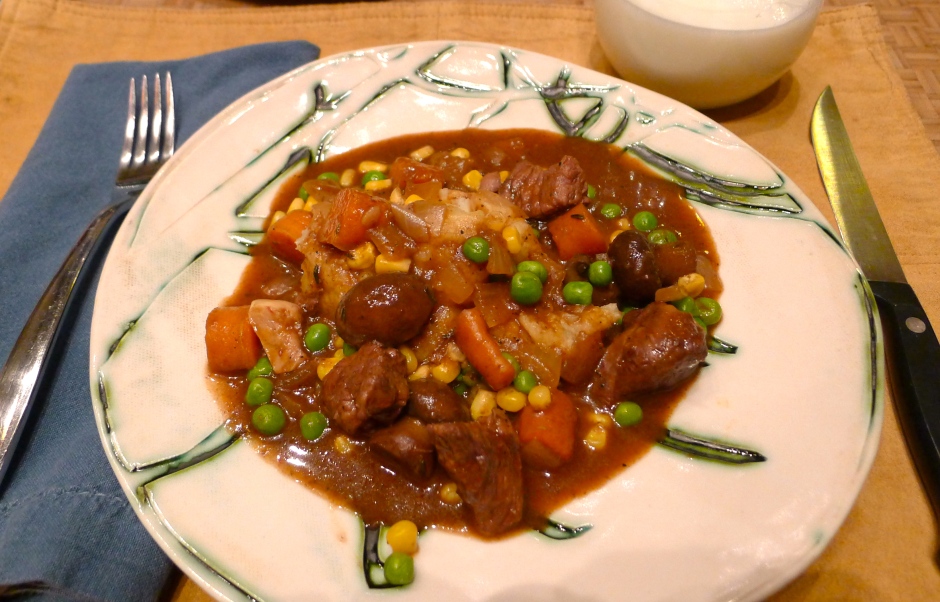 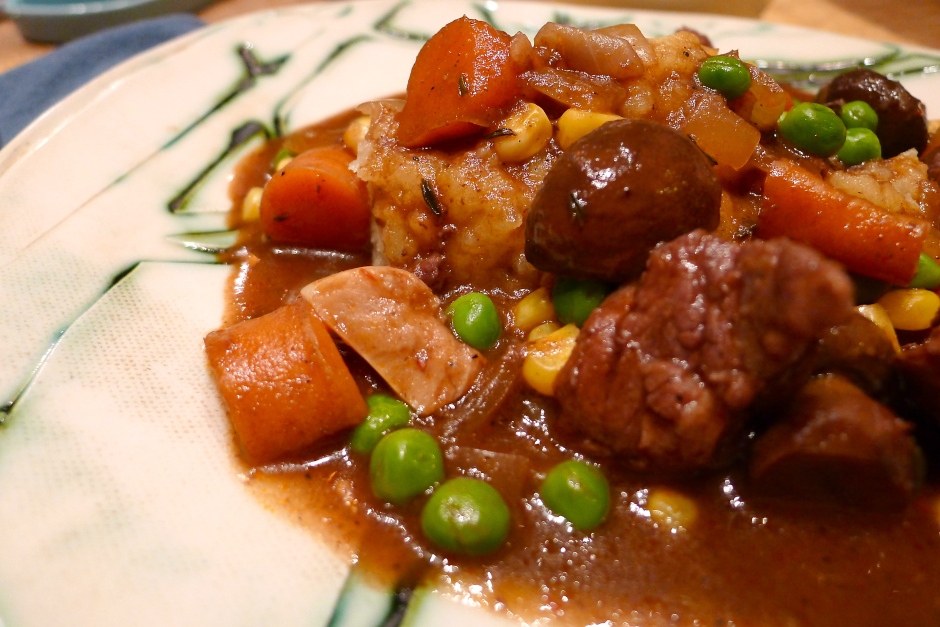 It might not be the prettiest plate of food, but the flavors are fantastic! The meal is like a big warm hug. It’s a great recipe to make on a weekend if you want leftovers throughout the week, and the meat and veggies freeze well in the sauce. Now that our warm-weather trip is over and Halloween has come and gone, meals like this make me excited for the season to come. YUM.

Trim large pieces of fat off of the chuck steak and cut into 2-inch pieces. Combine beef, carrots, onion, and mushrooms in the crockpot.

In a small bowl, whisk together the beef stock, tomato paste, and Worcestershire. Pour over the meat and veggies. Toss in the garlic cloves. Sprinkle with flour. Add a teaspoon each of salt and pepper. On top, place the thyme sprigs and bay leaf. Last, pour over the wine.

Turn the crockpot on HIGH for 4 hours, put the lid on it, and walk away. Stir the contents a couple of times during the cooking process.

To make the mashed potatoes, boil the potato chunks in salted water until tender. Drain. Add the butter, a generous pinch each of salt and pepper, and mash with a hand-masher. Splash in milk as needed until you reach your desired lumpiness or smoothness. Taste and adjust seasonings.

Add the peas and corn to the crockpot and allow to warm through. Remove the thyme sprig sticks and bay leaf. Taste the sauce and adjust seasonings if necessary. Serve by scooping some mashed potatoes on the plate and adding a ladle full of meat, veggies, and sauce over the top. Cheers to crockpots and comfort food. YUM!

One year ago: A recap of our trip to Baja last year, just one month after Hurricane Odile.