A goal of mine this year is to be more resourceful in my cooking. Instead of shopping ingredients for a specific recipe, I’d like to be able to create interesting dishes using whatever I find in my refrigerator or pantry. Too often, I’ll pick up beautiful produce and use a fraction of it before it’s spent, or I’ll open a can of something and only need half of it. I want to see those “leftover” things and cook with them to waste less food and challenge my culinary skills at the same time.

Our fabulous Thai Chicken Pizza uses spicy peanut sauce as the base, which requires a tablespoon or two of coconut milk. That left me with the bulk of the can leftover…what to do with it? Pinterest came to my rescue. While you wouldn’t know it from this weekend’s chilly weather, it’s almost ice cream season- perfect. After a little bit of research, I pulled a handful of ingredients together- eggs, a jar of Tahitian vanilla beans from our honeymoon that I keep meaning to use, some honey, my stand-by container of shredded coconut, and even a dark chocolate bunny left over from Easter. 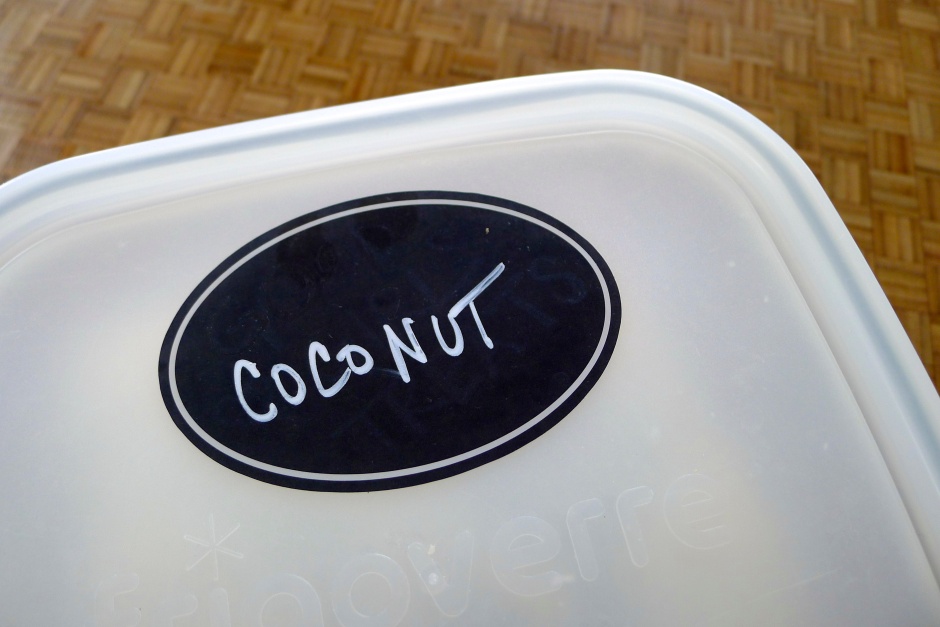 I had no idea you could make ice cream from coconut milk. I’m not lactose-intolerant, but I have friends who are, so the idea of a simple dairy-free ice cream recipe is quite appealing. I started by making a custard of sorts. I sliced open the surprisingly still-plump vanilla bean and scraped the yummy bits into a pan with the coconut milk. While the vanilla-y coconut milk warmed on the stove, I whisked four egg yolks together.

If I were to pour the yolks right into the hot liquid, the eggs would scramble. To avoid that, I slowly whisked a couple of warm ladles of coconut milk into the eggs. Then I poured the whole thing into the pan and whisked away while the mixture thickened up slightly. To sweeten the ice cream base, I added honey. Once it cooled a bit, I transferred it to a container and set it in the fridge overnight. Four ingredients- that’s it! 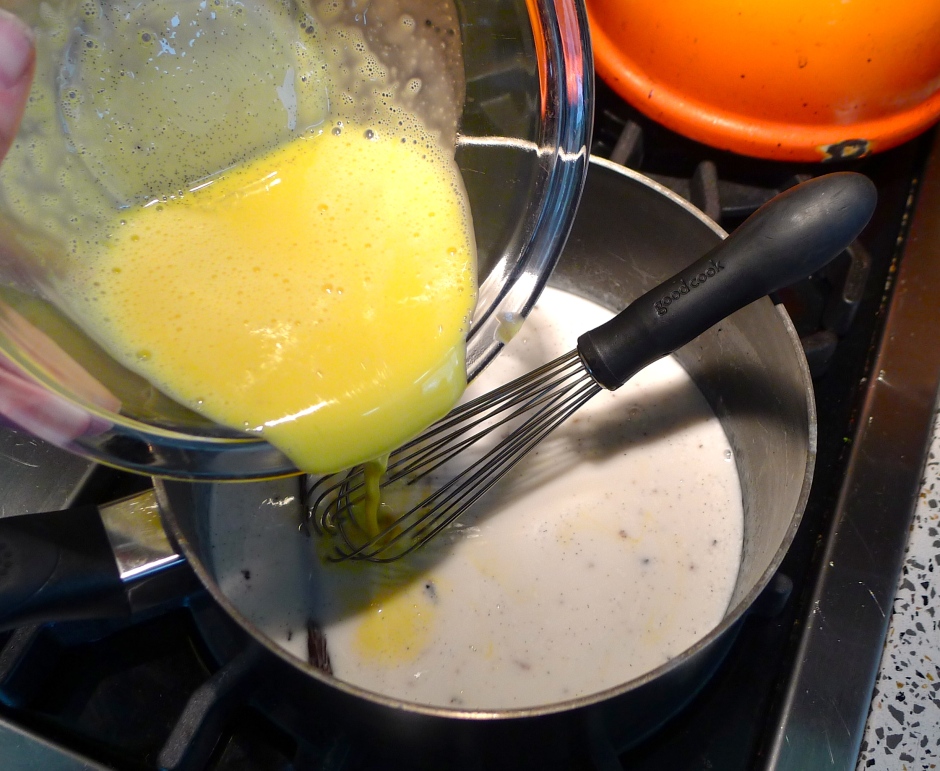 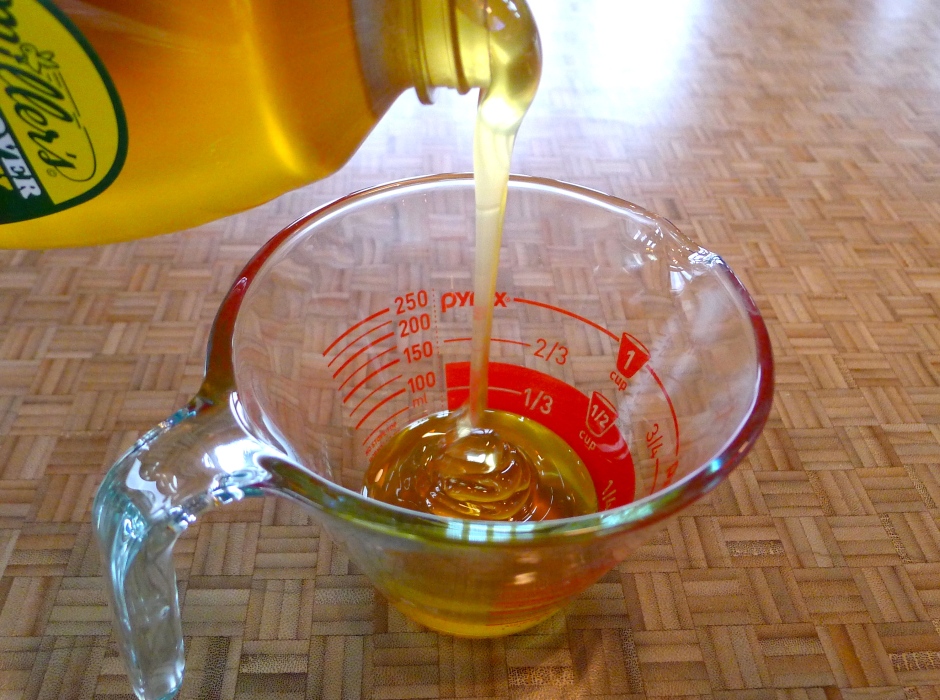 The next day morning, still in my robe, I simply poured the chilled coconut mixture into the ice cream maker and let it do its thing for a half an hour. In the meantime, I toasted some shredded coconut. I also beheaded the Easter Bunny (sorry) and chopped the dark chocolate into little bits. When the ice cream started to thicken, I poured the coconut and chocolate into the machine and let it stir it together for me. 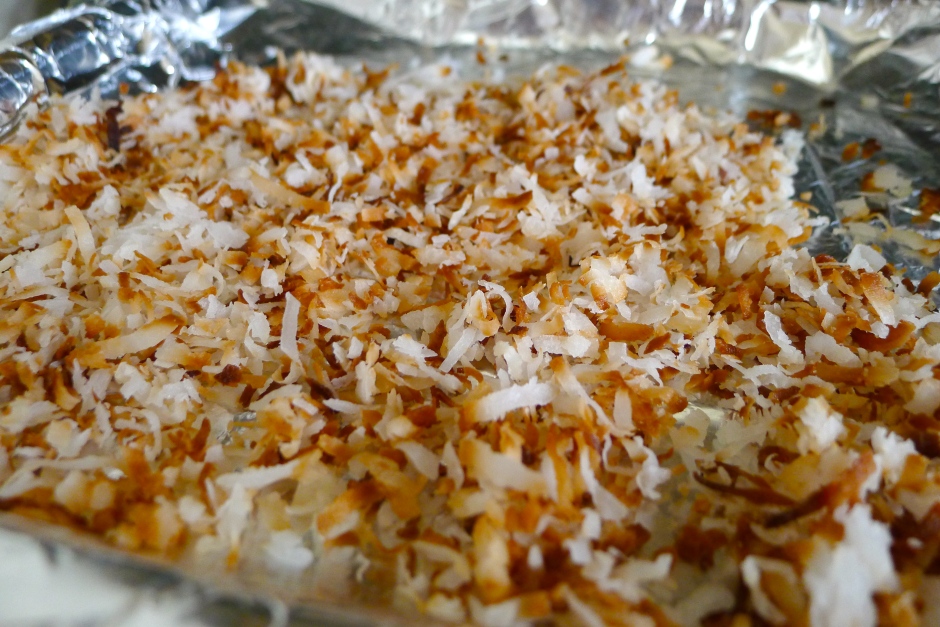 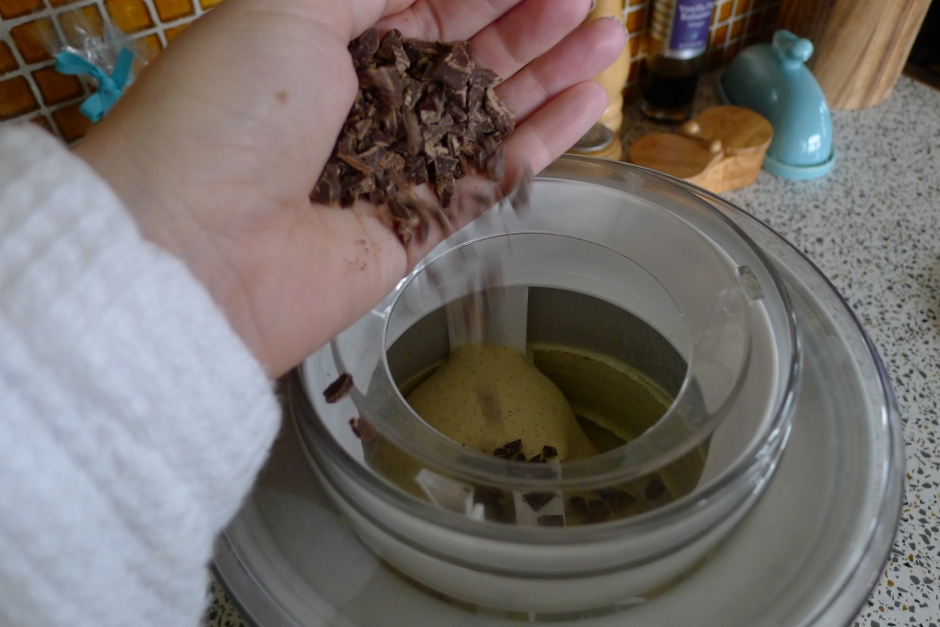 Hello, Gorgeous! I refrained from having a bowl of ice cream for breakfast, though I did give the finished product a taste. The texture is similar to other ice creams I’ve made at home, a little softer than store-bought. The coconut milk flavor is faint, especially with the sweet honey, but it’s reinforced by the toasted coconut. I love the chewy texture the toasted coconut adds, and the bits of dark chocolate are (obviously) delicious.

To serve the ice cream that evening, I sprinkled some leftover toasted coconut on top for extra chewy crunch. Though it had been in the freezer all day, it was still relatively soft and easy to scoop- an excuse to eat it quickly! I love that you can see the little flecks of vanilla in each bite.

I have a new favorite way to use up cans of coconut milk, just in time for ice cream season. I only wish the recipe made a bigger batch…because it’s already gone.

Split the vanilla bean down the middle and scrape the seeds into a small saucepan. Add the bean itself and the entire can of coconut milk. Heat on medium heat to warm the mixture. In the meantime, whisk the four eggs together. Slowly whisk two ladles of the heated coconut milk mixture into the egg yolks, then pour the whole thing into the saucepan. Heat for 15 minutes, whisking constantly, until the mixture begins to thicken (do not let it boil). Remove the pan from the heat, remove the vanilla bean, and stir in the honey. Once slightly cooled, transfer to a container and let it chill in the refrigerator for a few hours or overnight.