Last summer, during a visit from my awesome brother, we enjoyed the tastiest, most unique taco night in memory. Instead of the usual Mexican flavors, we went Thai. I’d planned to make a Thai salad with the ingredients, but thought tacos would fill up hungry boys a little better, so I switched gears and sort of winged it. From the marinade for the chicken to the spicy peanut sauce to the rainbow of fun taco toppings, the meal was spectacular. (Also: the yard!) 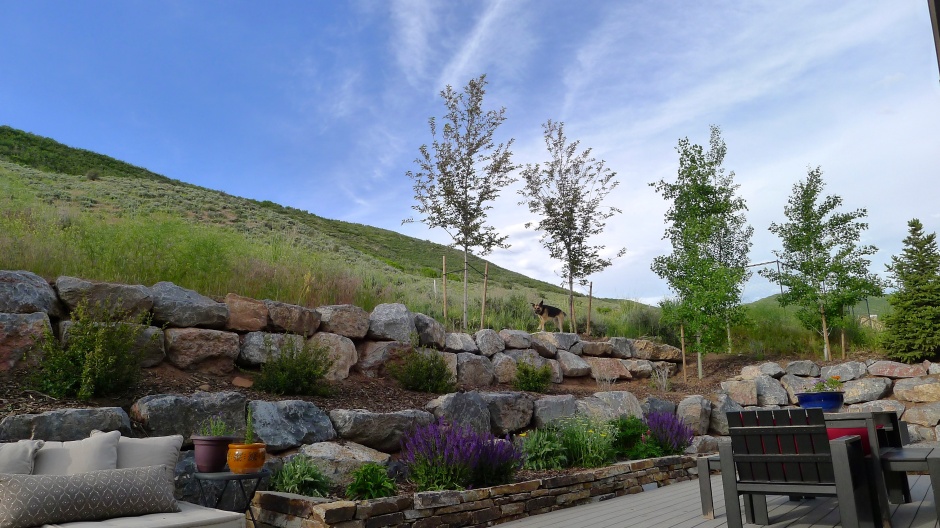 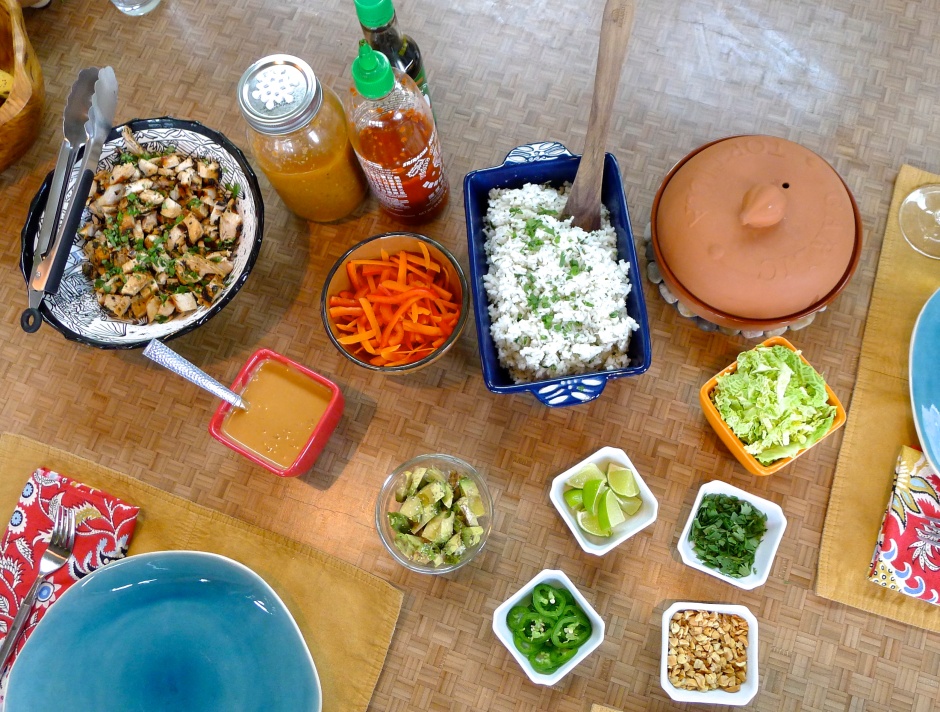 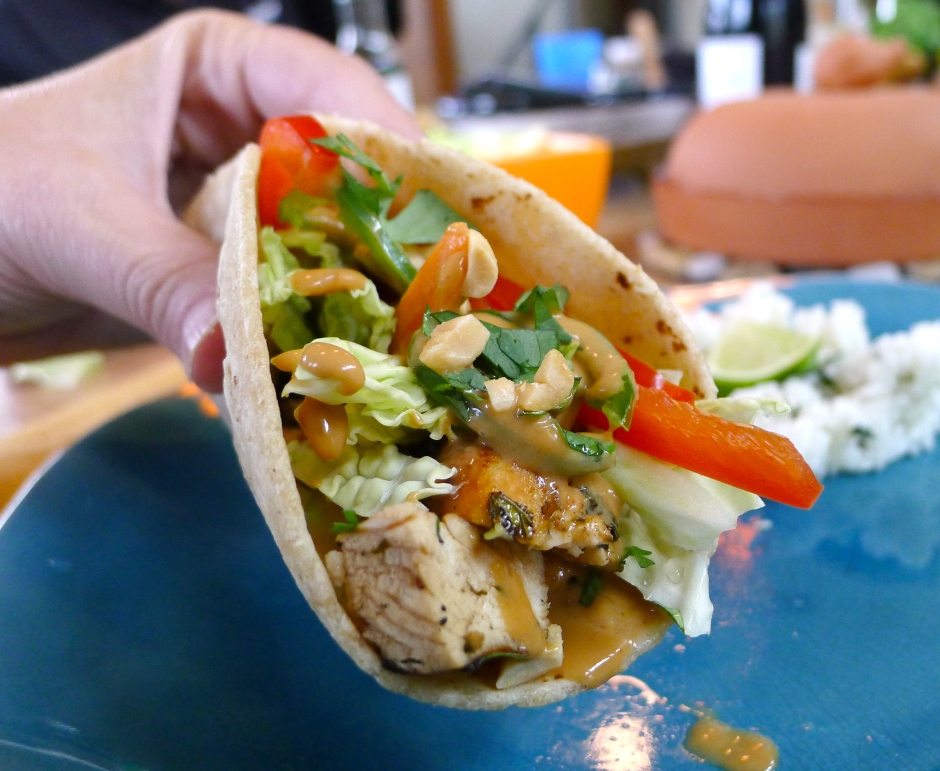 We’ve enjoyed those Thai tacos a few times since June, but the other night, we were in the mood for pizza. Mashing up cuisine types is a culinary pastime in this house (remember the fajita panini and the Mexican pizza?). The results of our experiments have been delicious…so we did it again.

My thought was to use the spicy peanut sauce that we drizzled over our tacos as the “sauce” for the pizza. The taco toppings would become pizza toppings. Brilliant! We make pizza at home often, so that process was familiar. I’d made the main components of the Thai tacos a few times, so that was easy, too. I started by marinating the chicken in the tasty combo of Asian flavors I’d used before, like rice vinegar, cilantro, mint, and lime. The chicken swam in the marinade for a couple of hours and John used it to baste the bird as it grilled. 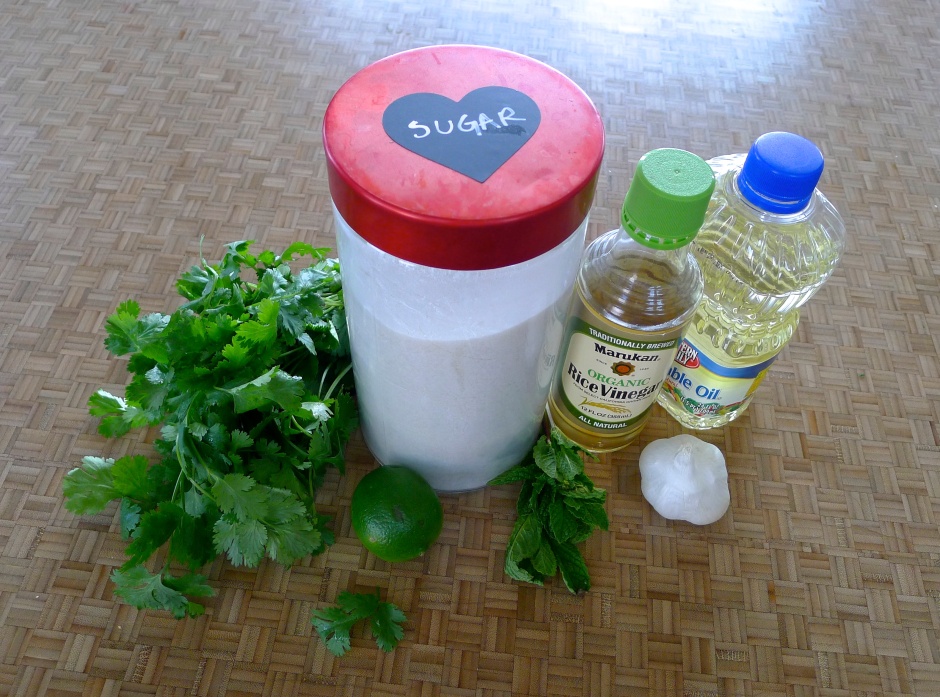 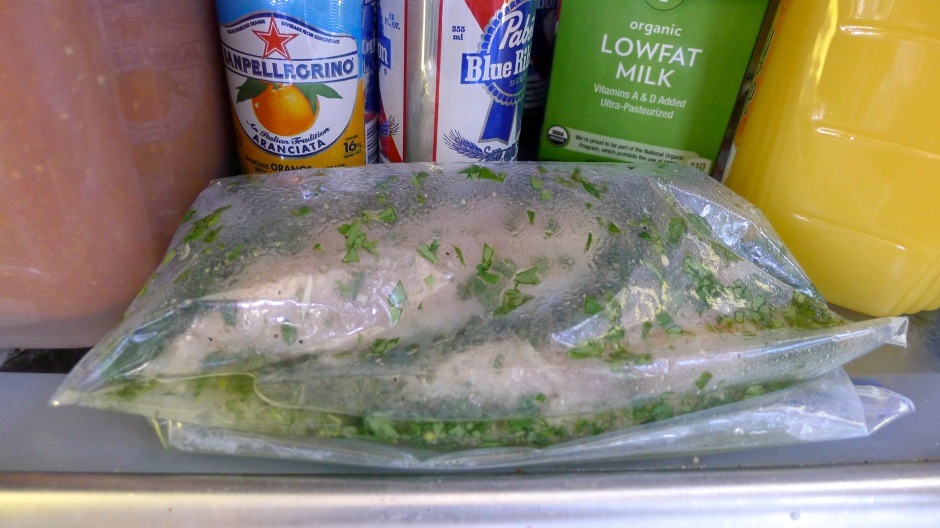 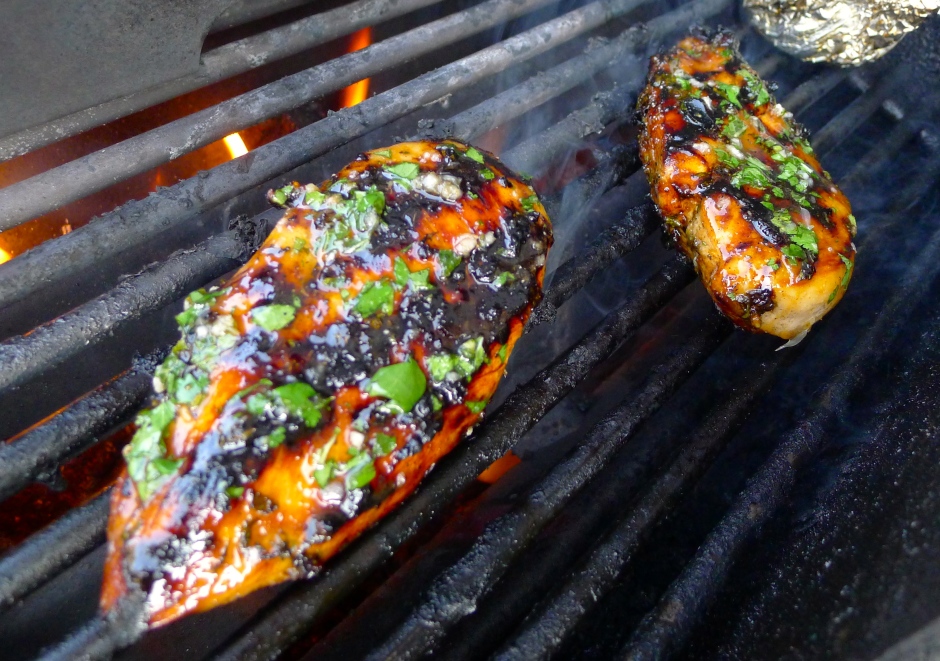 The peanut sauce would sub in for traditional marinara sauce. I whisked together the peanut butter, soy sauce, rice vinegar, Sriracha, lime, and a little coconut milk, using the same recipe as I did last summer. On our trusty wheat dough (courtesy of Whole Foods), I oiled the edges and spread some sweet Thai chili sauce over the crust, followed by the peanut sauce. Let’s build the pizza! 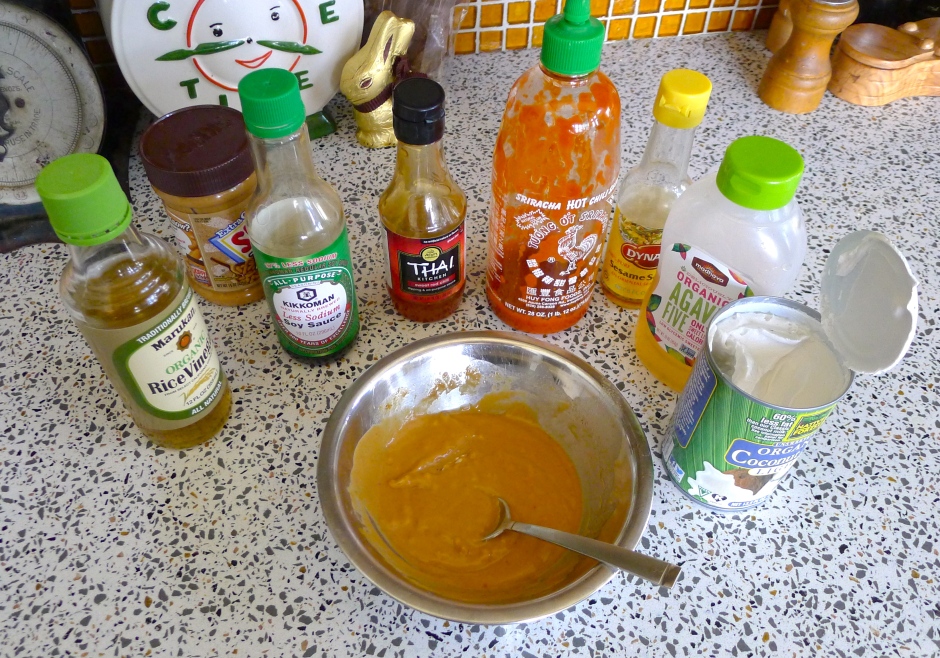 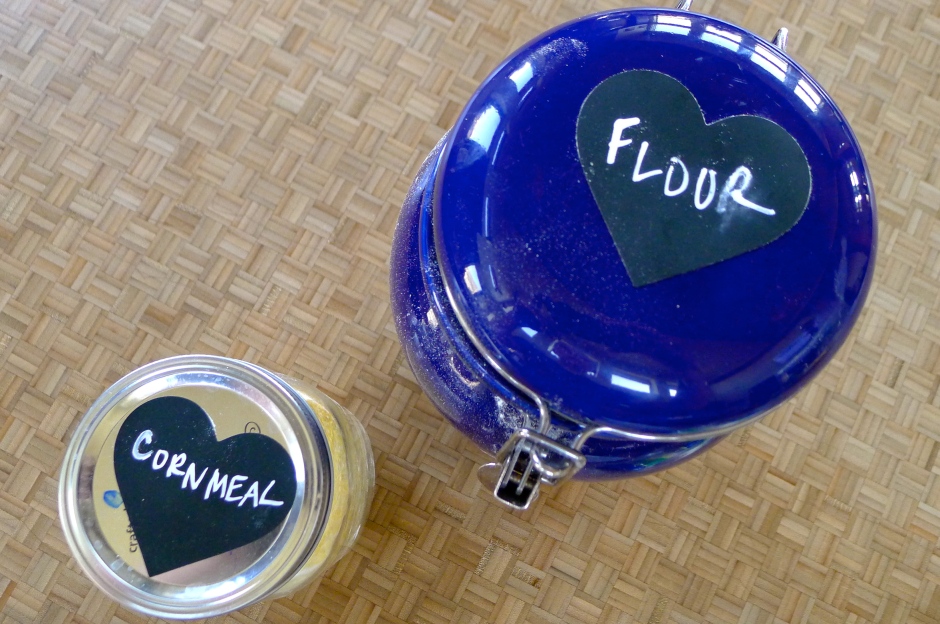 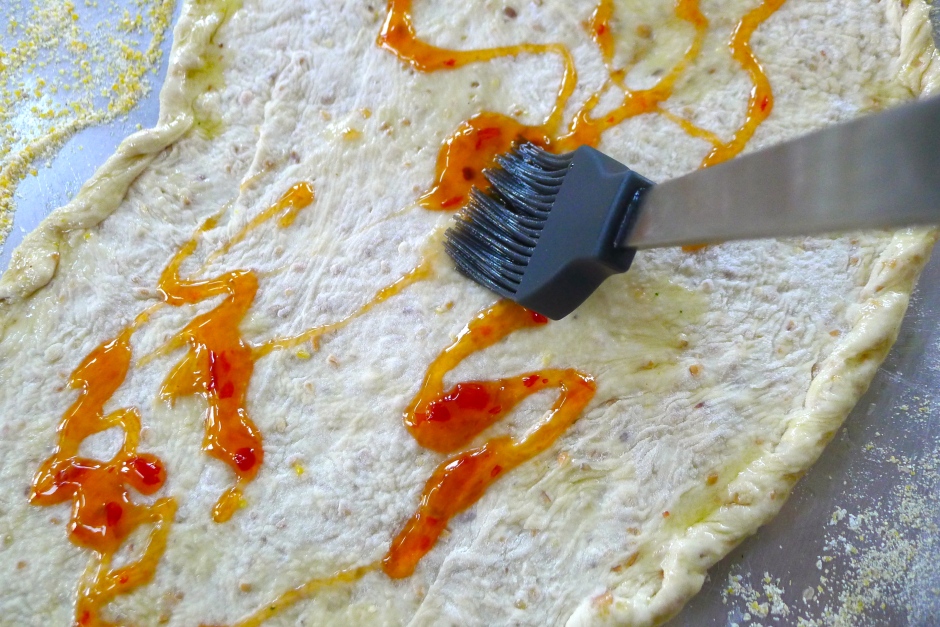 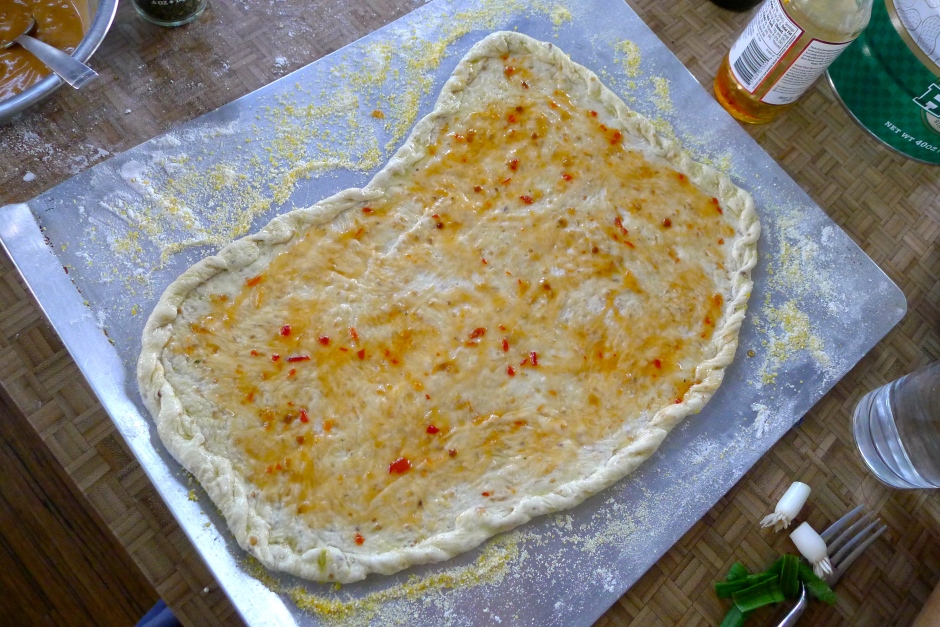 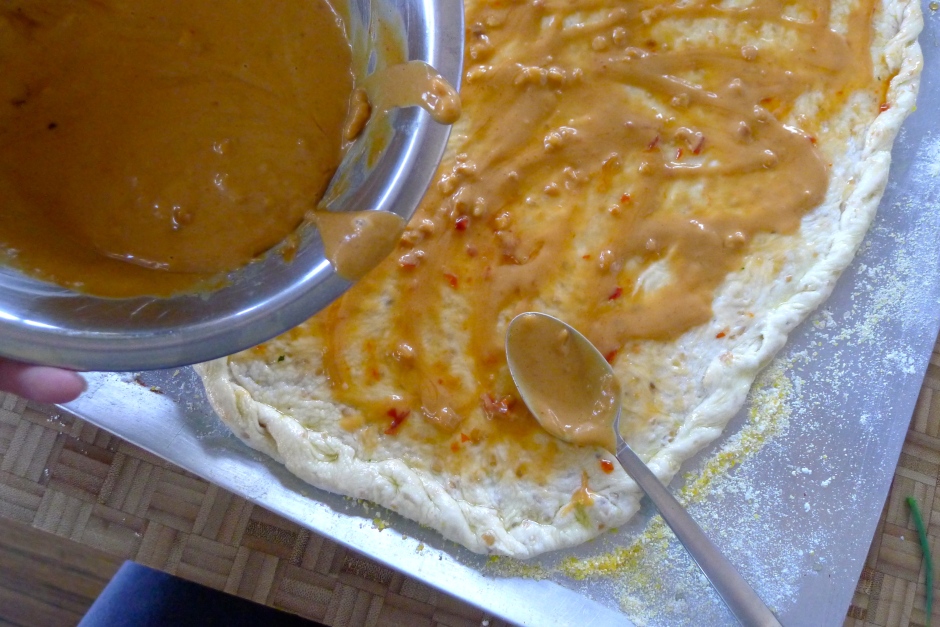 Since it’s a pizza, I started with a sparse layer of shredded mozzarella. For veggies, I added thinly sliced carrot and red bell pepper and sprinkled jalapenos over the top. Next came the scrumptious grilled chicken, which I’d chopped, and another sprinkling of cheese. It went right onto the pizza stone on the grill! 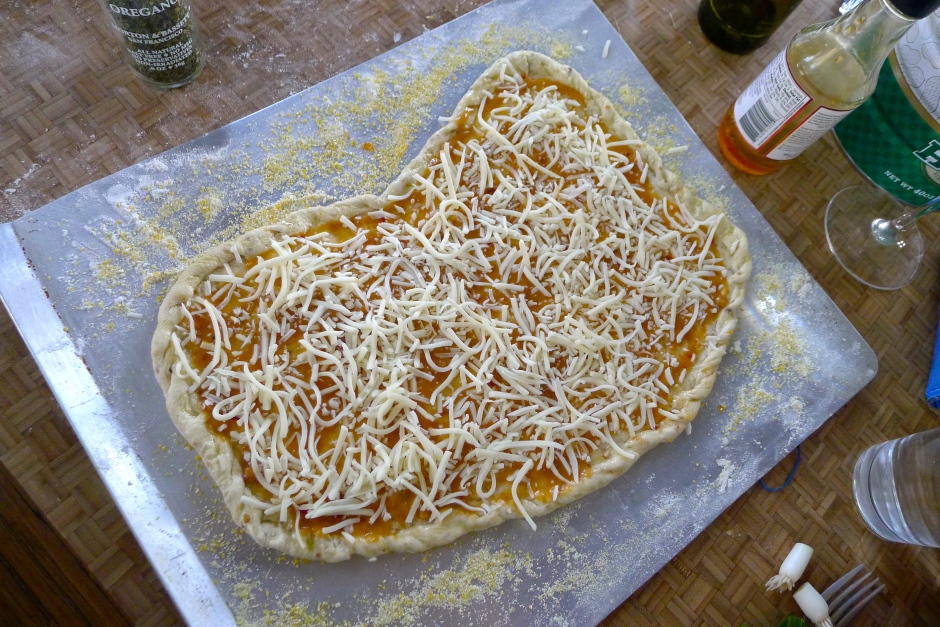 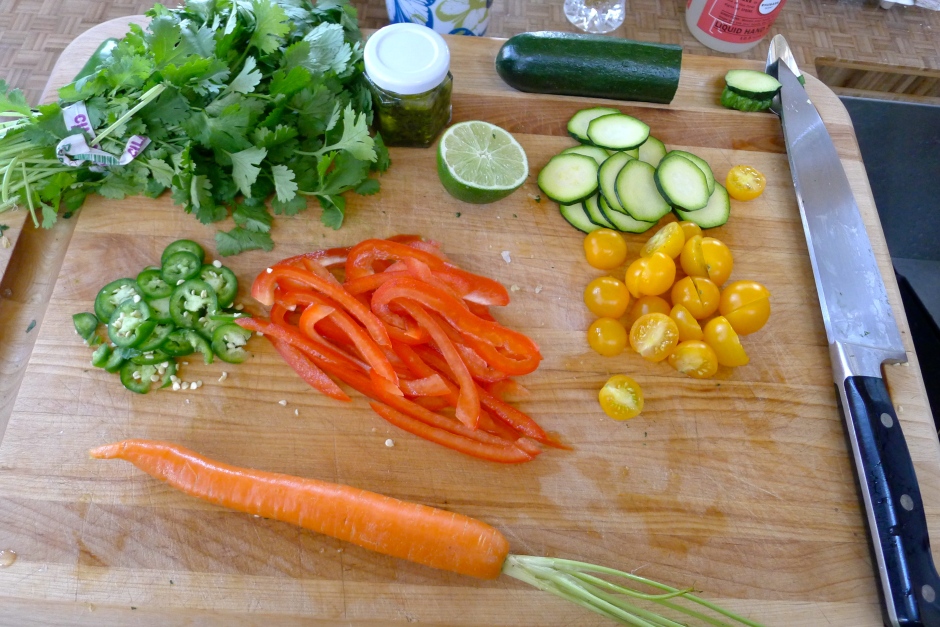 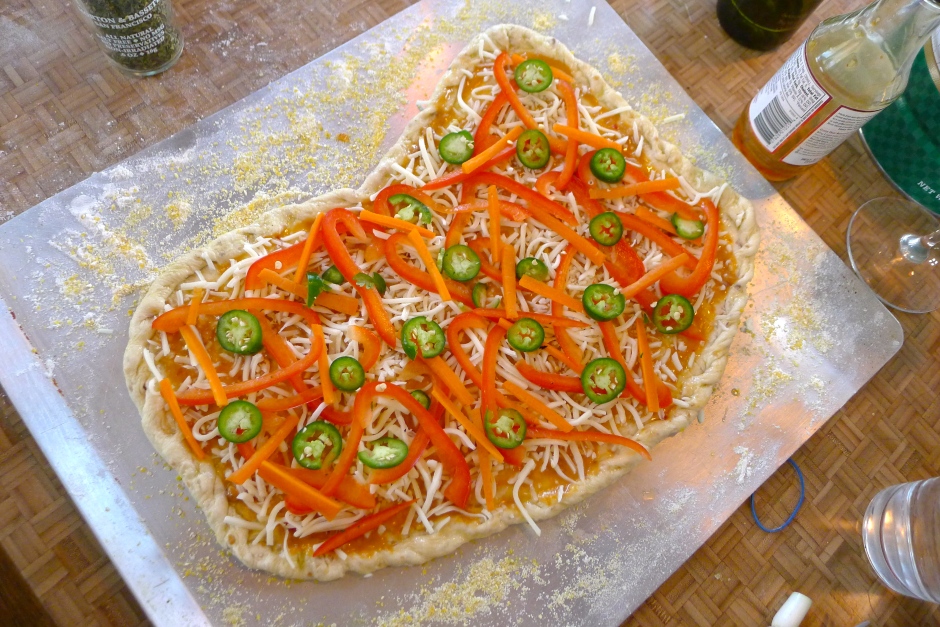 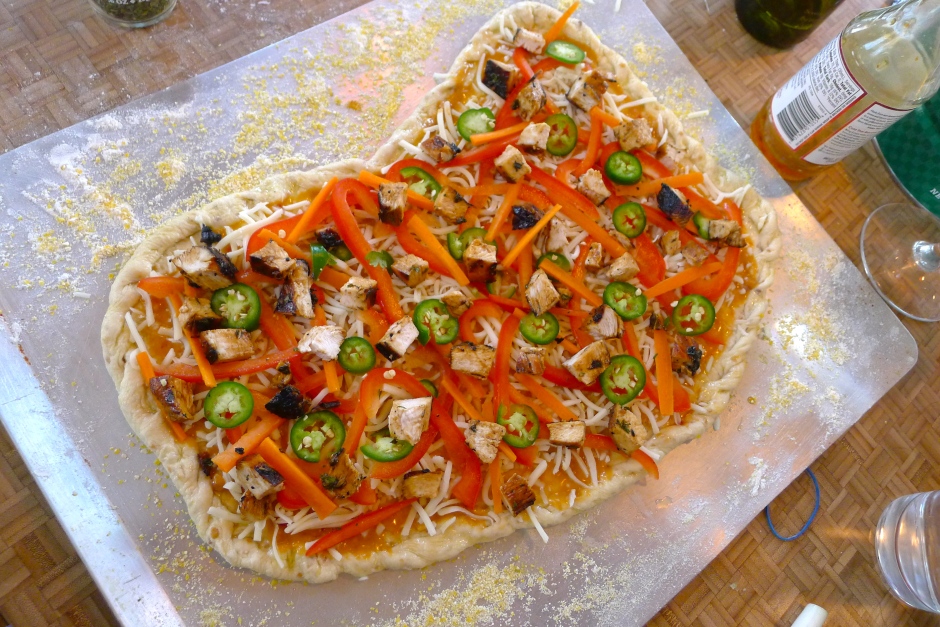 For toppings, I chopped some tasty roasted peanuts, green onions, and cilantro. The pizza was ready in under ten minutes, and look how gorgeous it is! The peanut sauce mingled into the mozzarella to create something magical, and the edges of the crust were beautifully browned, thanks to the brushing of olive oil. I added the last fresh toppings before we sat down to taste our Italian/Thai taco/pizza combo. 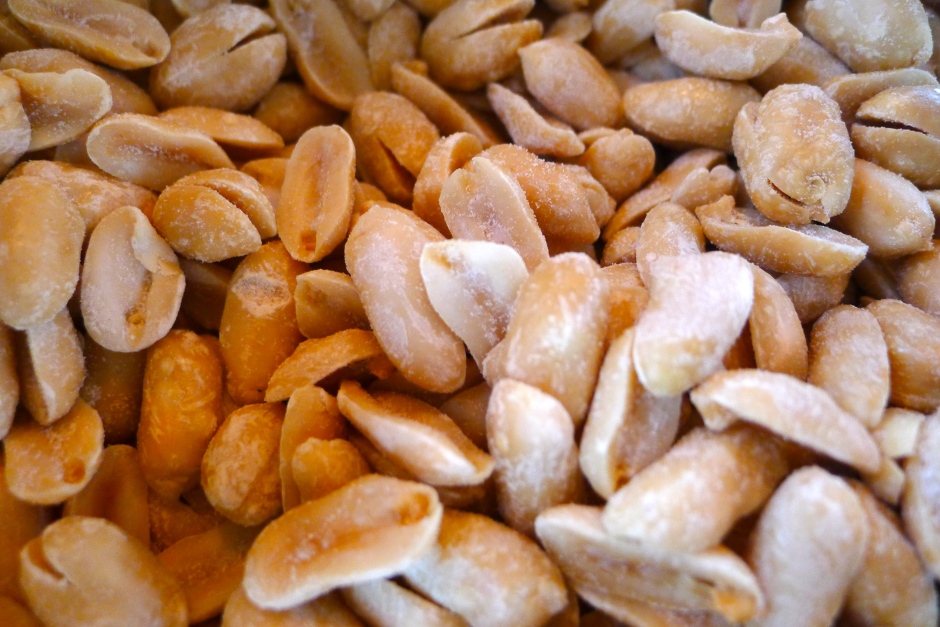 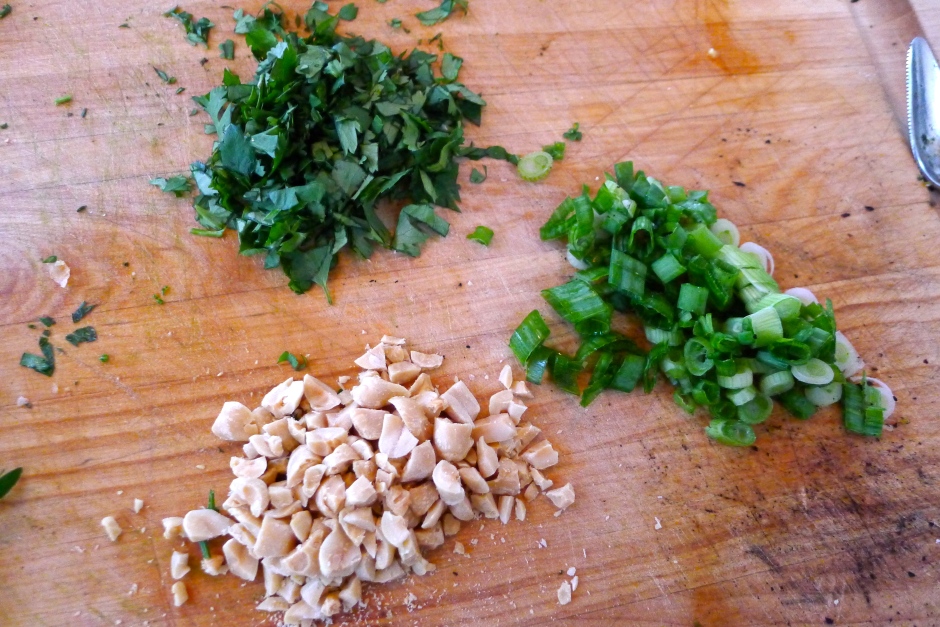 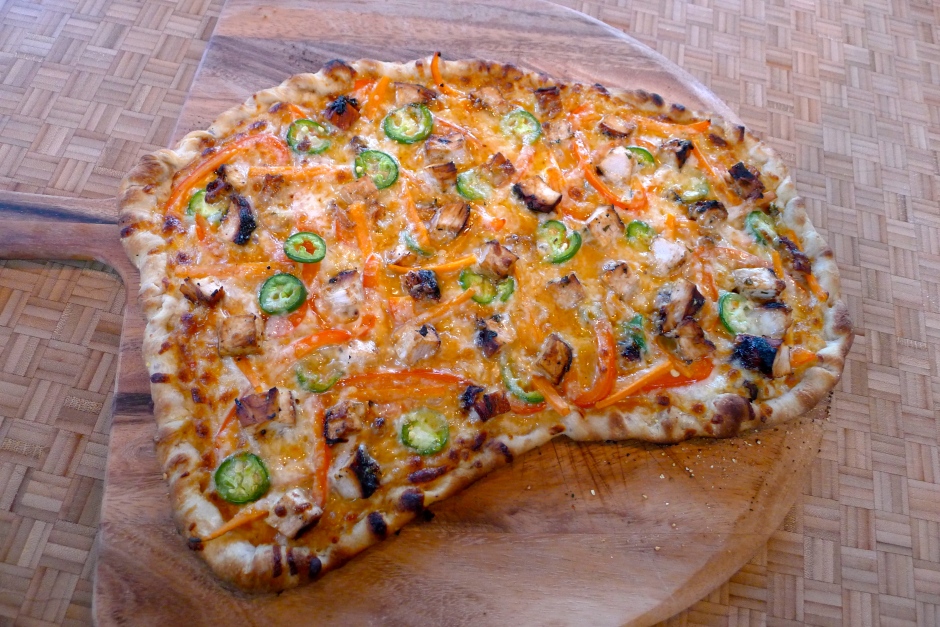 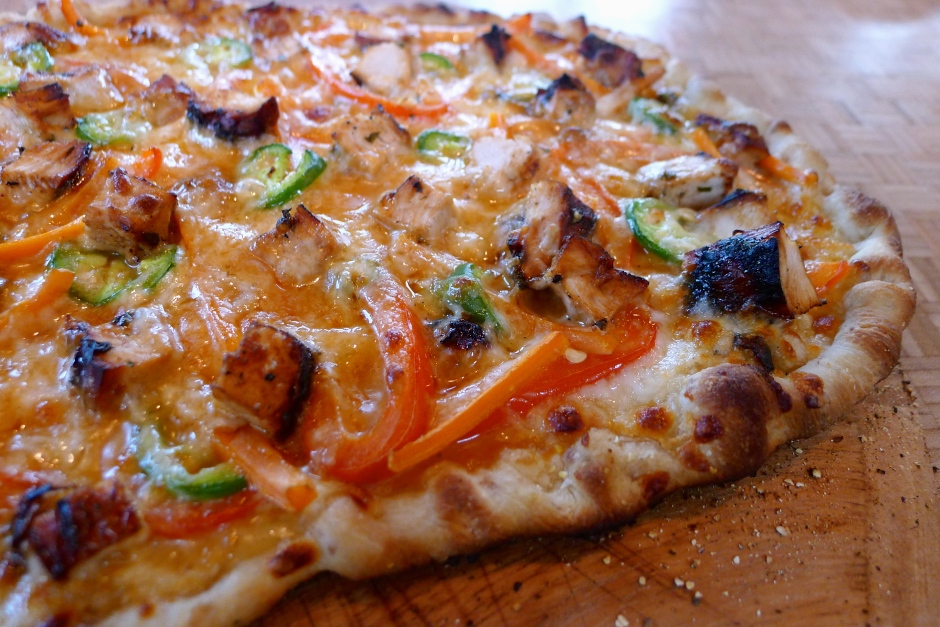 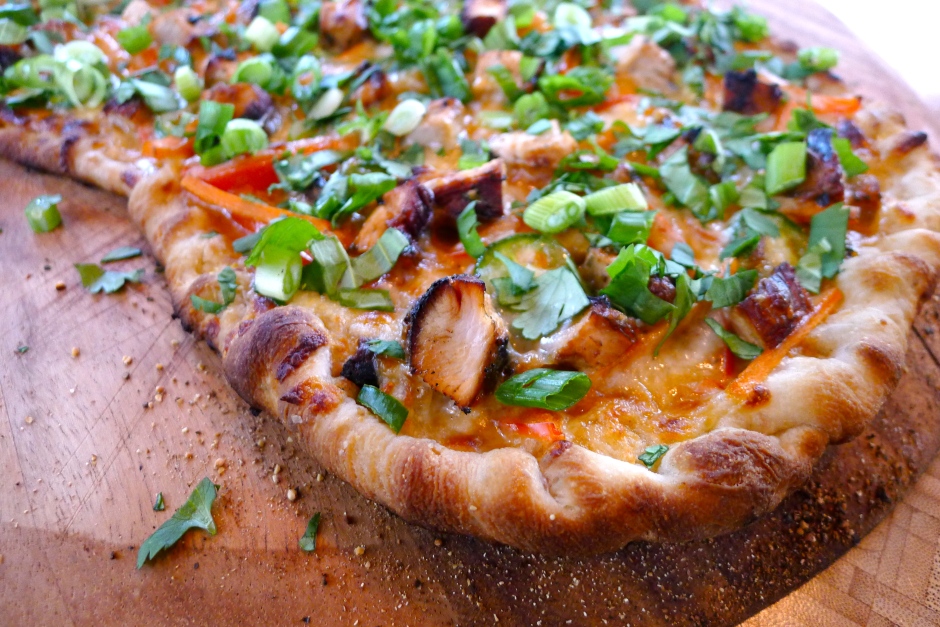 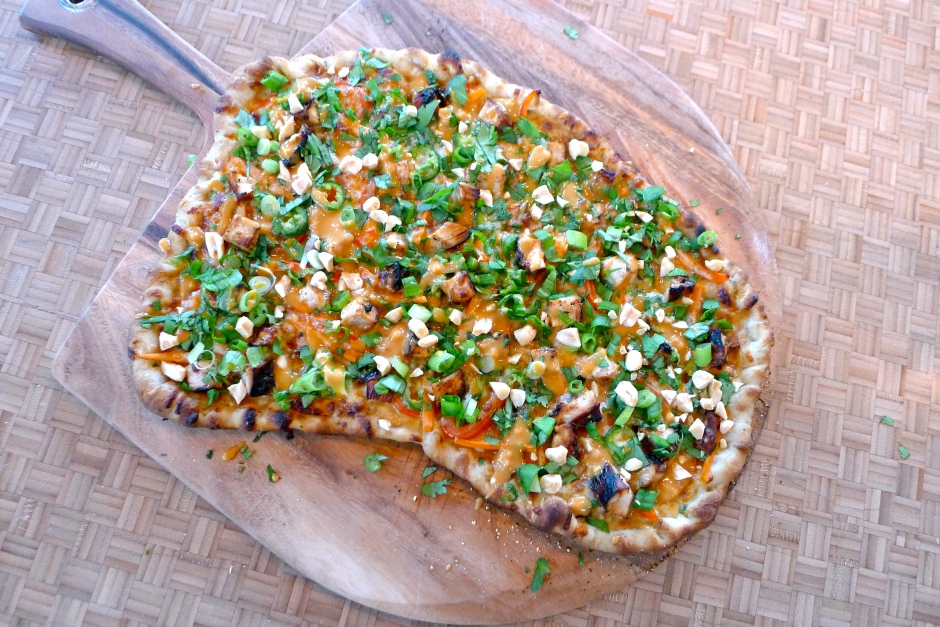 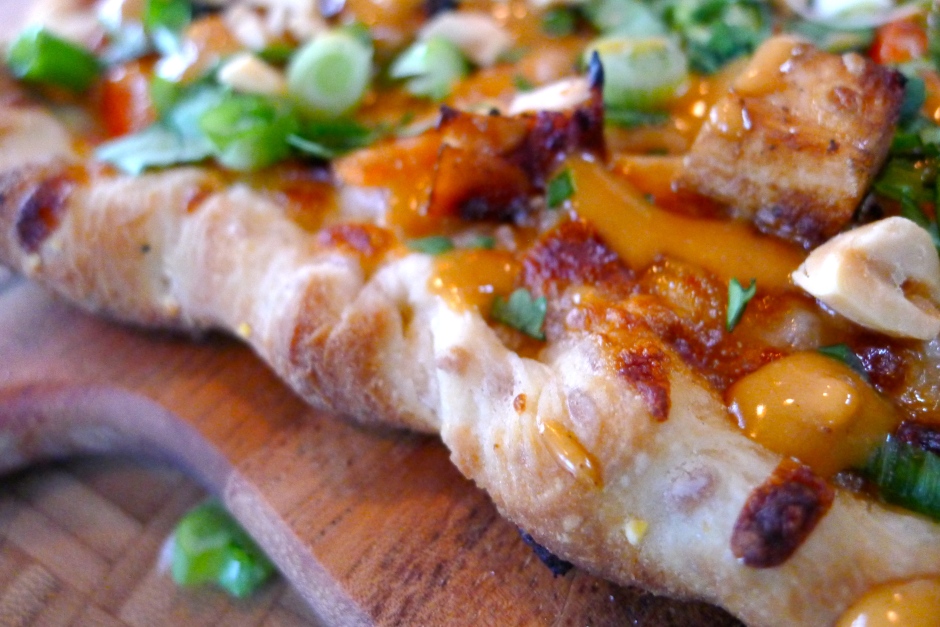 The verdict: another (very) successful cuisine mash-up! The pizza tasted just as fabulous as the tacos; each bite was full of scrumptious Thai flavors. There was spiciness from the peppers and spicy peanut sauce. There was brightness from the fresh herbs and lime. The veggies and peanuts gave a crunchy texture and the crust was perfectly charred and chewy. Pizza perfection. 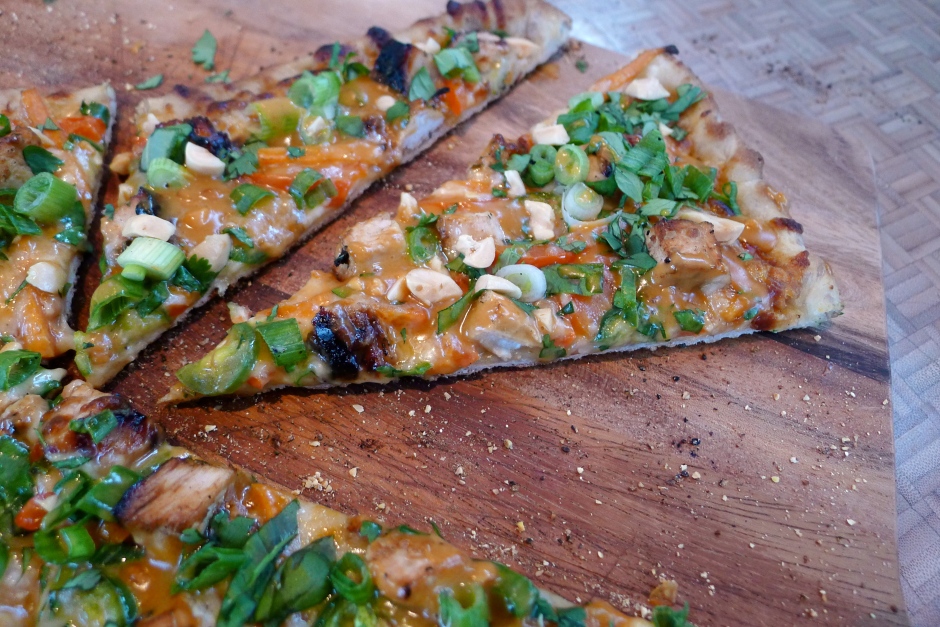 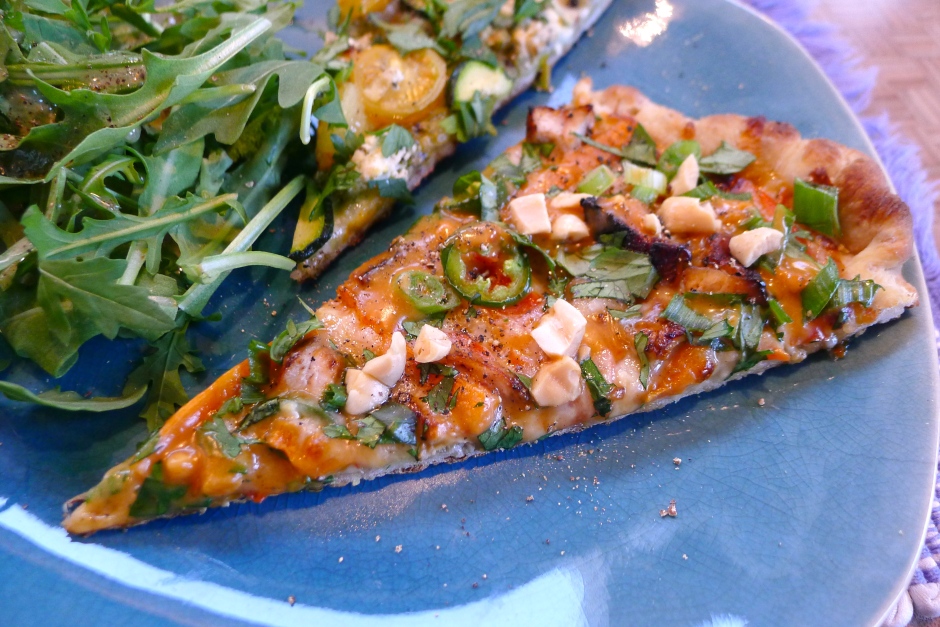 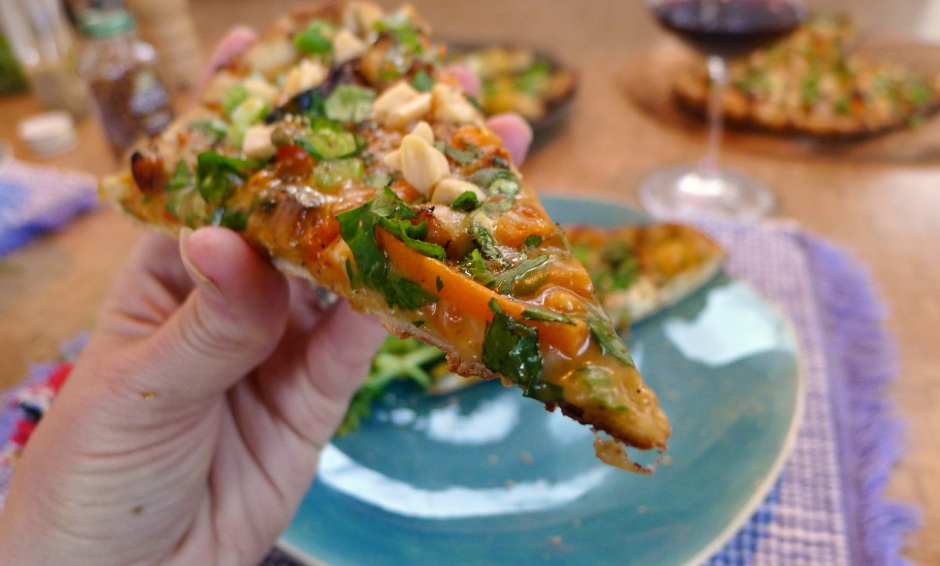 Confession: I might like the pizza version better than the tacos! I’m sorry to report that there were no leftovers…

Except for the two pieces I ate for breakfast the next morning. YUM.

For the chicken marinade, you’ll need:

For the peanut sauce, you’ll need:

Heat a pizza stone on the grill on high heat (or in the oven at 450). Grill the marinated chicken and cut into bite-sized pieces.

Cut the dough in half. On a well-floured surface, roll out a ball of dough to a ¼ inch thickness. Transfer to a flat baking sheet covered in flour and cornmeal. Roll the edges of the dough and brush the edges with olive oil. Brush the sweet red chili sauce over the crust, followed by an even (thin) layer of the peanut sauce. Sprinkle a sparse layer of mozzarella cheese. Add carrot, bell pepper, and jalapeno. Add chopped chicken and another layer of cheese. Transfer the pizza to the pizza stone and bake for 6-8 minutes, or until the cheese is well-melted and the crust is browned. Repeat with the other half of the dough.

For serving, top the pizza with green onions, cilantro, chopped peanuts, and a drizzle of more peanut sauce. Daydream about when your backyard will look like it did in June and clink a glass to trying new things in the kitchen. YUM.