I have a somewhat complicated relationship with morning.

I understand the allure- the quiet, the light, the full day ahead. But my bed is also quite alluring. Occasionally, my body awakens earlier than usual and I get a glimpse of what it’s like to be a morning person. A couple of Sundays ago, while John and Cholula snored in unison, I shuffled downstairs and savored the momentary solitude. I sipped coffee under a nubby throw blanket and flipped through magazines. I watched the birds having breakfast at the birdfeeder, chirping in the winter sun. I noticed the light as it moved across the walls in ways I don’t usually see. And I got a head start on breakfast. 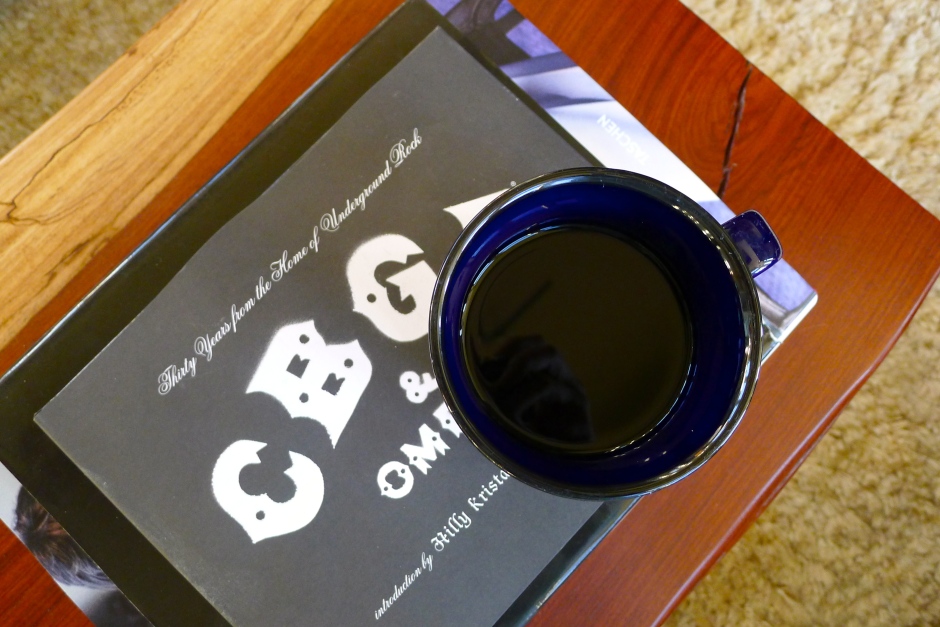 I’d had a breakfast BLT in mind for a while, wanting to jazz up the classic with fancy bacon and an egg. After doing a little research, I saw many different versions of candied bacon, using brown sugar or cayenne pepper or dry mustard or rice vinegar. I thought about what flavors I wanted- sweet and spicy– and kept it simple. Its simplicity is what makes a BLT so fabulous. And, after all, my morning brain was still foggy. 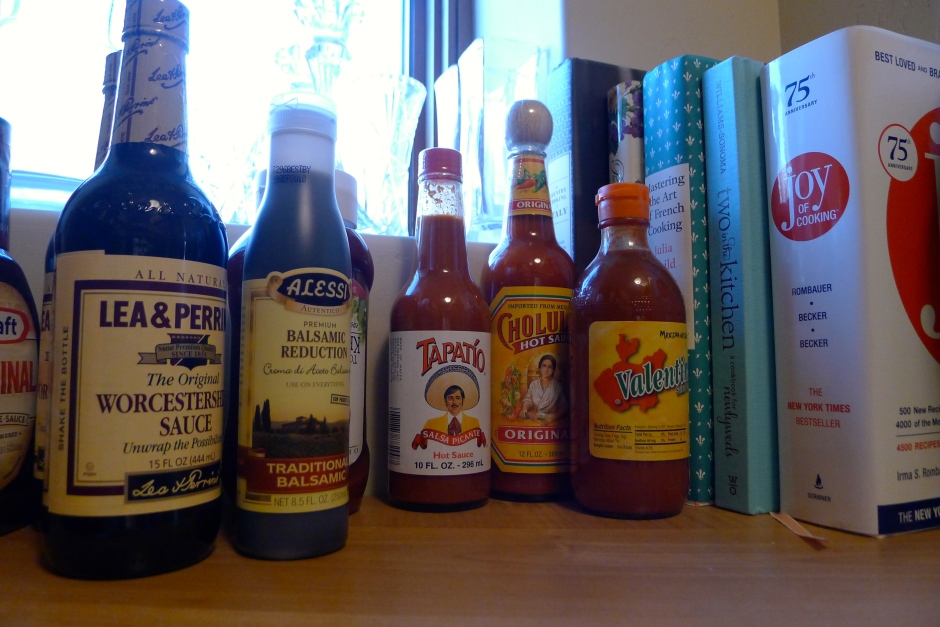 There’s never a shortage of hot sauce in this house; I keep backups of various sauces in the pantry so we never run out. (Our dog is named Cholula. Hello.) For the cottage bacon I’d discovered in the freezer, I combined equal parts Sriracha and maple syrup. The bacon would add a salty factor and I’d add cracked pepper at the end. YUM.

I laid a rack over a baking sheet for the meat and realized that cottage bacon is not the same thing as bacon. It’s more like a bacon/ham combo, sliced in bigger pieces. I baked it in the oven for ten minutes or so before flipping the pieces. After a few more minutes, I flipped it again and brushed some of the spicy-sweet glaze on the meat. I kept doing that until it was as crisp as cottage bacon was going to get. After a cracked pepper shower, the star of the sandwich was ready. Hello, gorgeous. 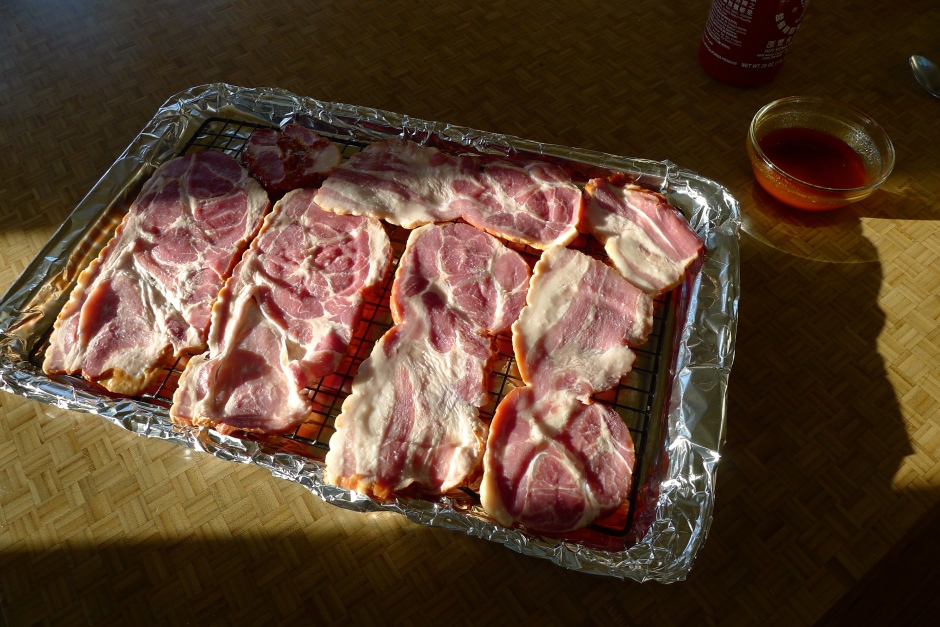 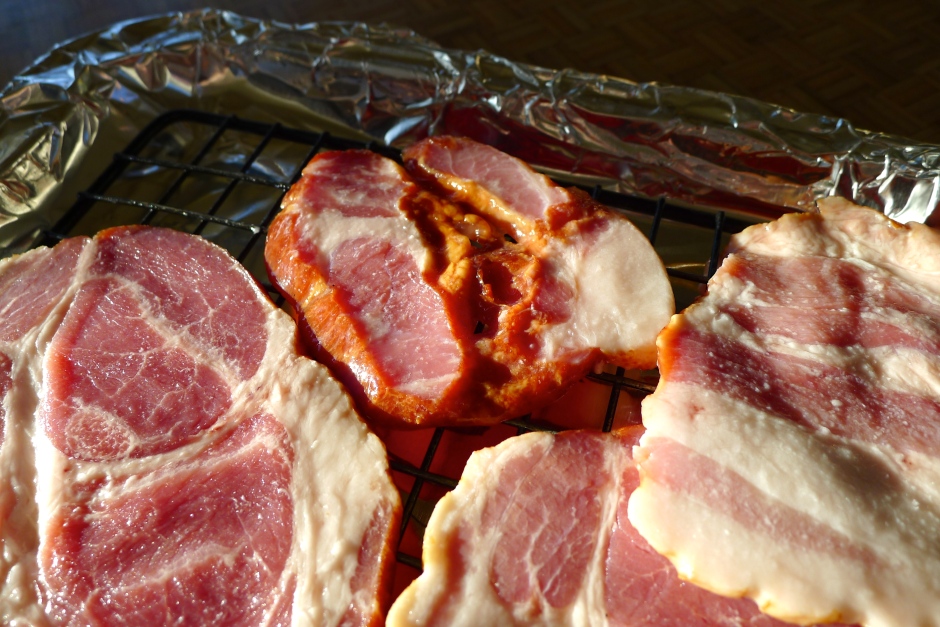 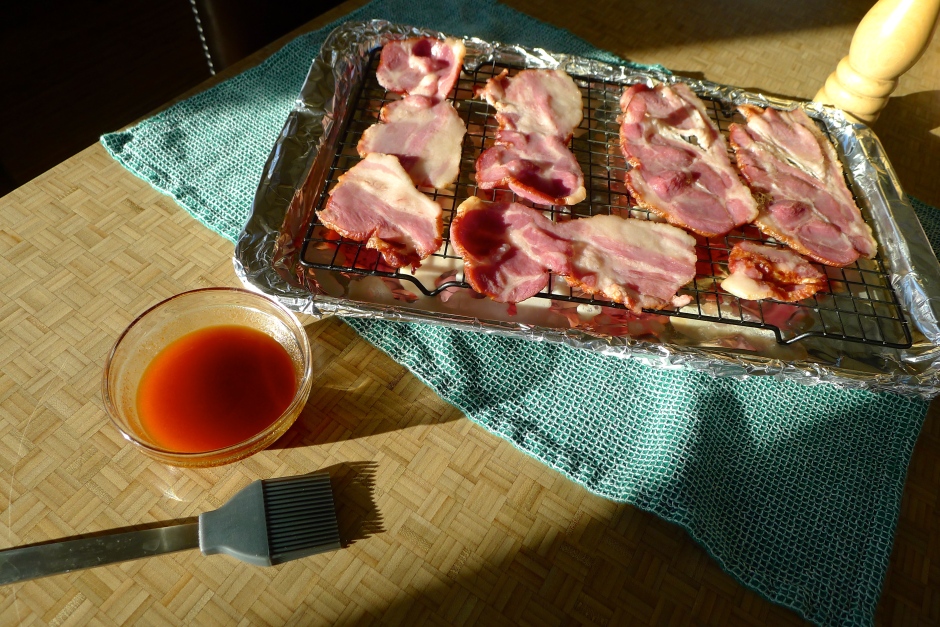 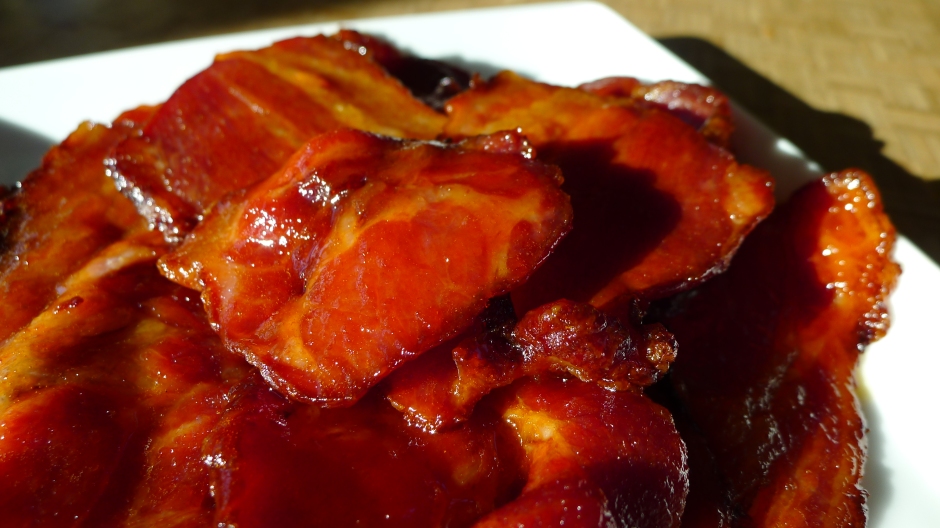 As soon as I started to cut the loaf of bread I’d intended to use, I realized that it was all wrong. No, for these  BLTs, we’d go with standard toasted honey-wheat sandwich bread. My family had groggily meandered into the kitchen, drawn by the intoxicating aroma of bacon on Sunday morning. John fried the eggs to perfection while I prepped the sammie ingredients. (Cholula supervised.) 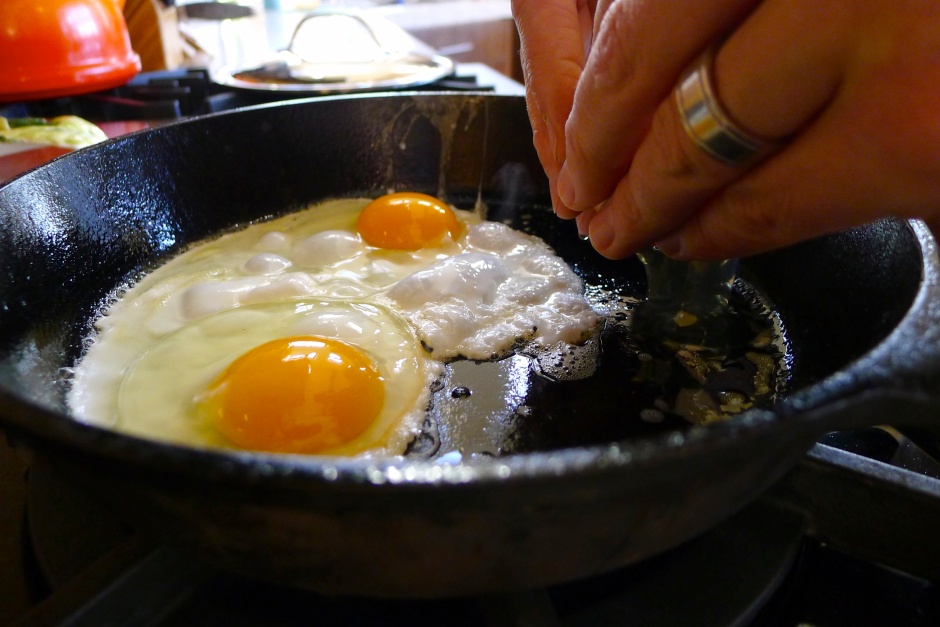 After toasting the bread, I smeared on a little mayo. Next came some peppery arugula, the glistening spicy bacon, and thick tomato slices. John gingerly placed an egg on top of the pile of goodness. When in doubt, put an egg on it. GOOD MORNING. 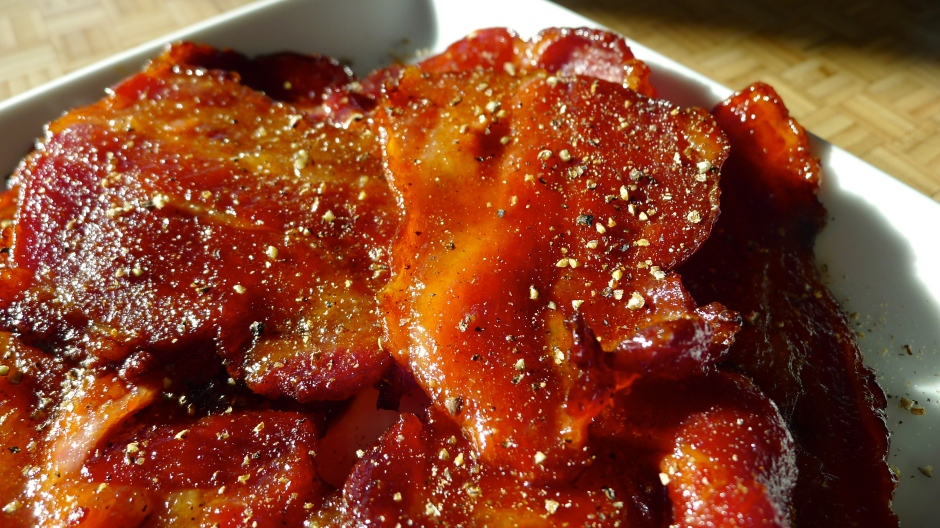 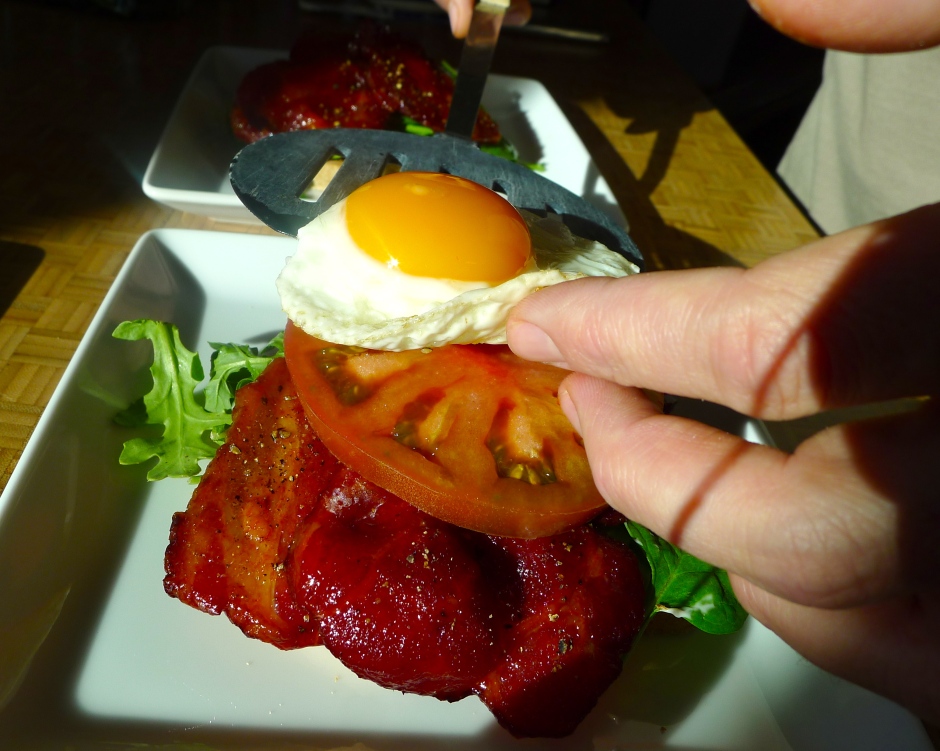 We pressed the other slice of toast on top, letting the yolk drip into the sandwich before diving in. My first thought was: Now that’s a breakfast sandwich. My second thought was: YUM. The cottage bacon was at once sweet and spicy and salty, and the arugula was a good choice to bring out the pepper flavor. The tomatoes were juicy and the sandwich bread was the classic way to go. It was everything you love about a really good BLT, plus a beautiful fried egg. Decadent. 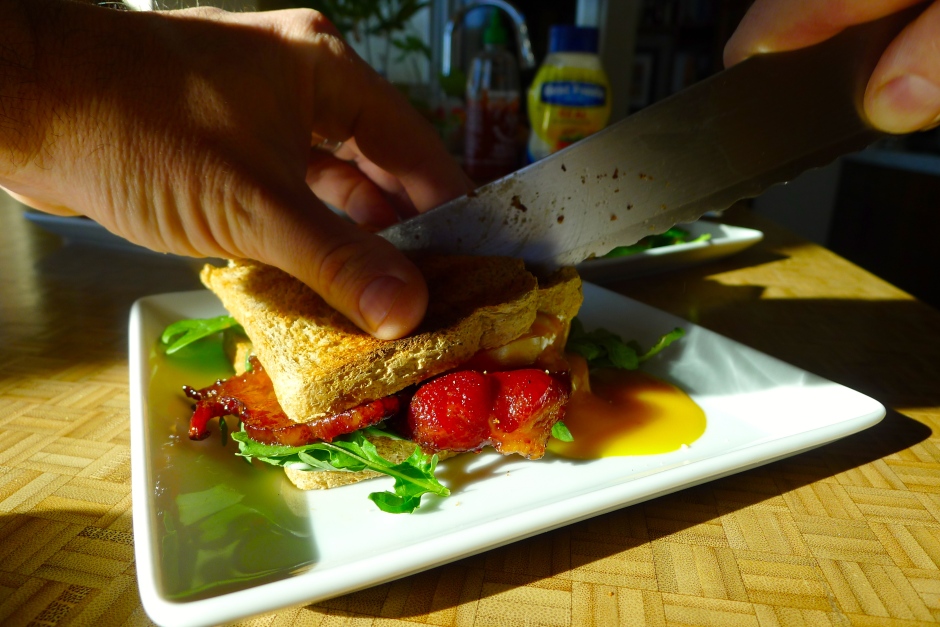 The only problem with this breakfast BLT was that as soon as we were done, we didn’t jump up to start our day. No, we laid our full bellies back down on the couch to digest and relax…which makes this the perfect weekend breakfast. 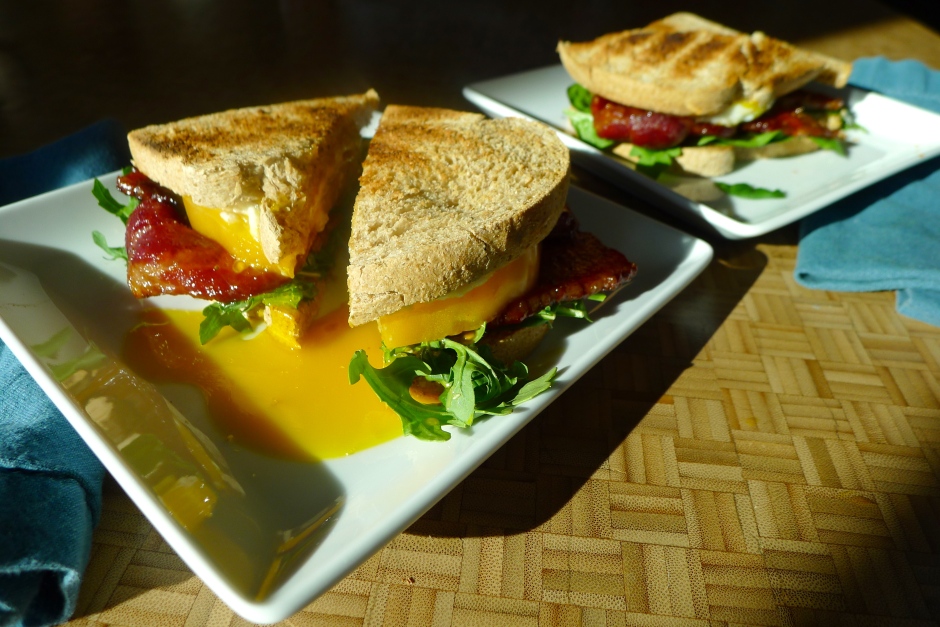 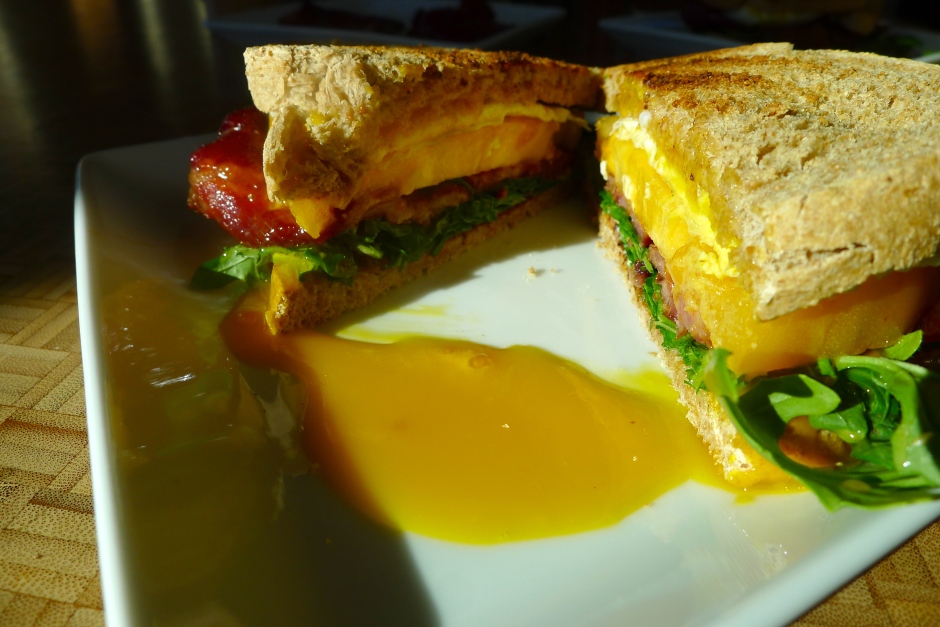 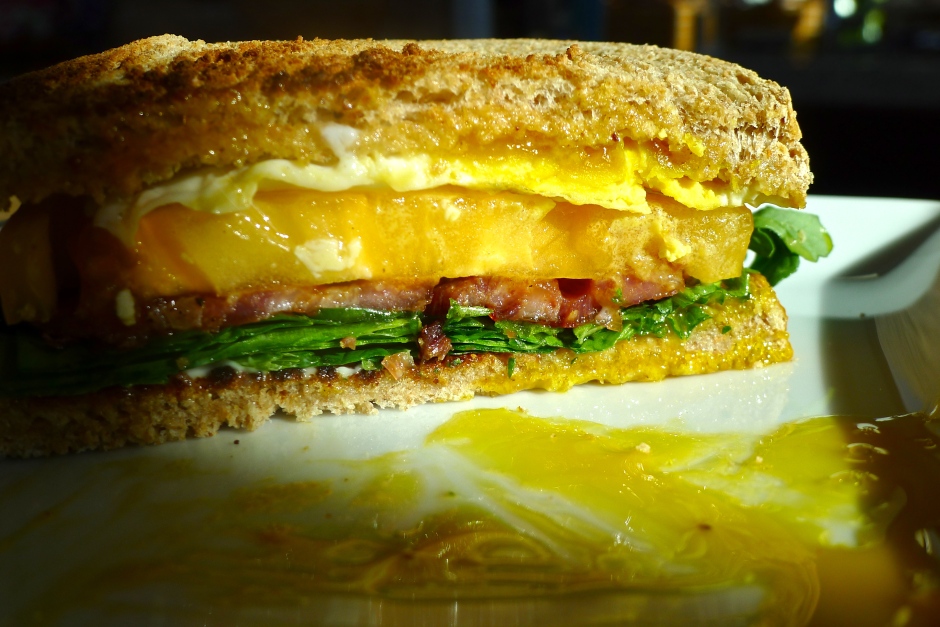 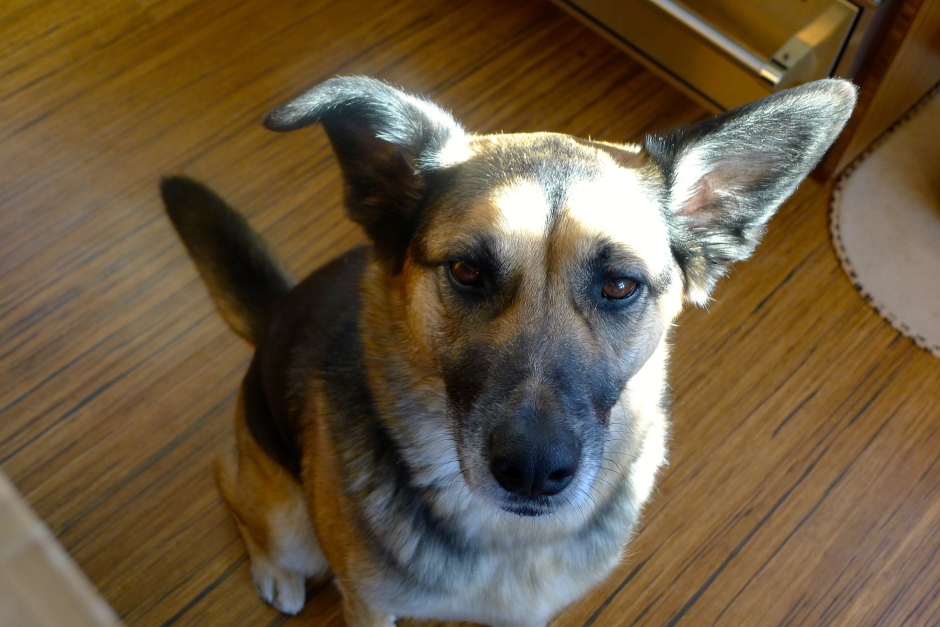 It’s almost enough to make me a morning person.

Heat the oven to 350 degrees. On a rack laid over a foil-covered baking sheet, bake your desired amount of bacon for ten minutes. Flip the bacon and bake for another 5 minutes. Combine the Sriracha and maple syrup. Flip the bacon and brush with the mixture and bake it for 5 more minutes. Repeat the flipping/glazing until the bacon is as done as you like it.

Spread some mayo on a slice of toast. Add some greens, then a few slices of bacon, then a tomato slice or two. Place a fried egg on top before adding another piece of toast. Enjoy in the morning sun and reserve time for a nap afterward. YUM.

One year ago: Fabulous FONDUE.