Anyone who has ever loved (and been loved by) a dog knows that it’s a very special relationship. The phrase “man’s best friend” is no joke. Today, Cholula turns three years old! She’s already a pretty spoiled dog (as can be seen on this site regularly), but today I have an excuse to go big. She deserves it.

Before I share the recipe for homemade doggie treats, indulge me with brief walk down Memory Lane. Cholula weighed less than five pounds when she came into our lives. We fell in love with her spunky spirit and the white tip of her cute little tail (which wagged non-stop). Daddy let her sleep in the bed very early on, which led to a serious bed hog. 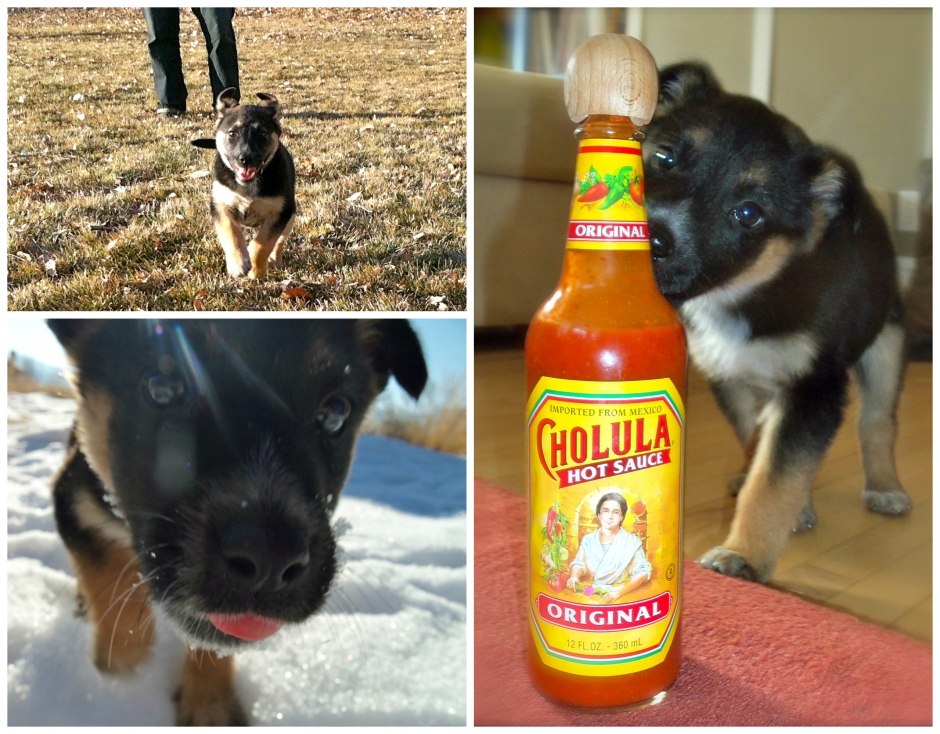 She’s had one bath in her life, which she hated but was ridiculously adorable. She could fall asleep anywhere, and still is a professional napper (in our bed, obviously). She discovered water, which led to a diving obsession. She discovered snow, and plays Yeti half of the year. There were times we wondered if she would EVER grow into those ears. 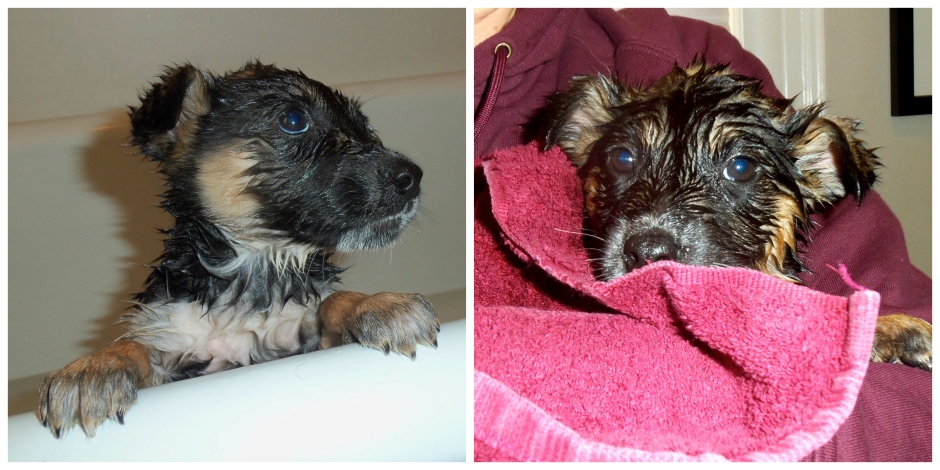 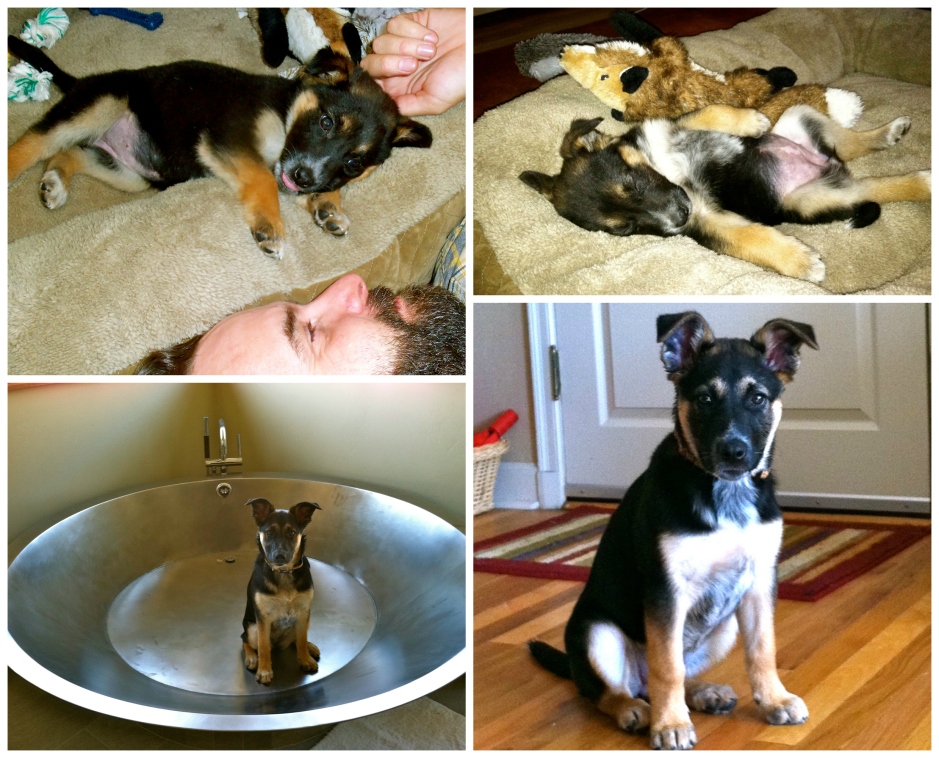 At three years old, she’s less than 60 pounds. People still think she’s a puppy because of her size and energy. She insists on sitting on my lap during road trips. She leads the way on little adventures just about every day. She celebrates with us when we’re happy and licks our tears away when we’re sad. 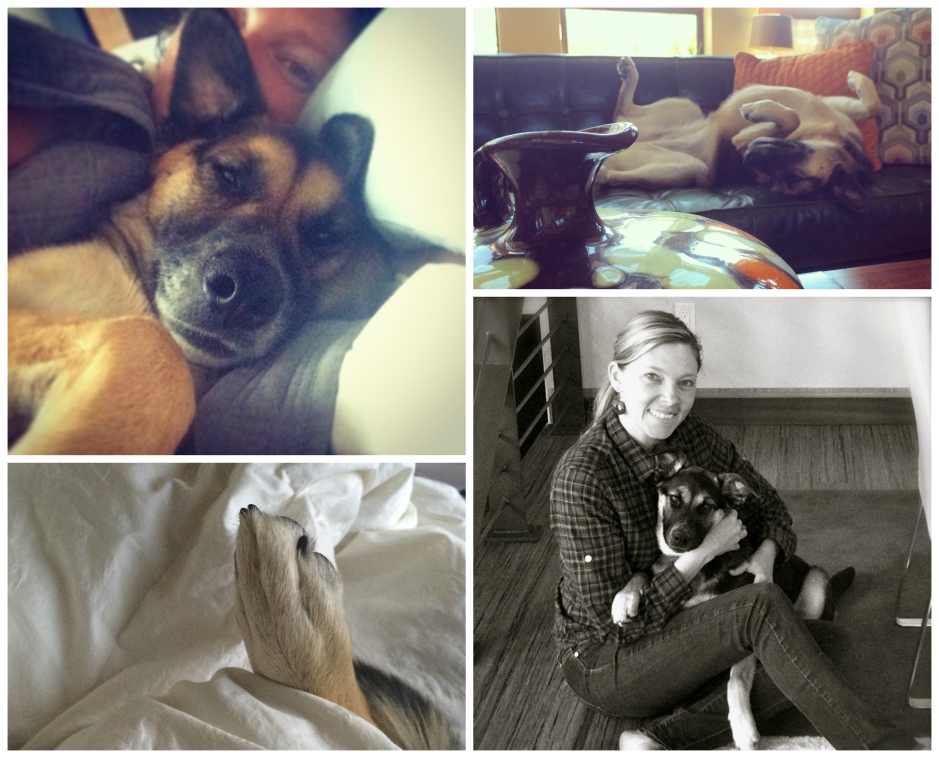 We knew from the second we met her that she’d capture our hearts, and our lives are 1000 times better with her. We’re a family. 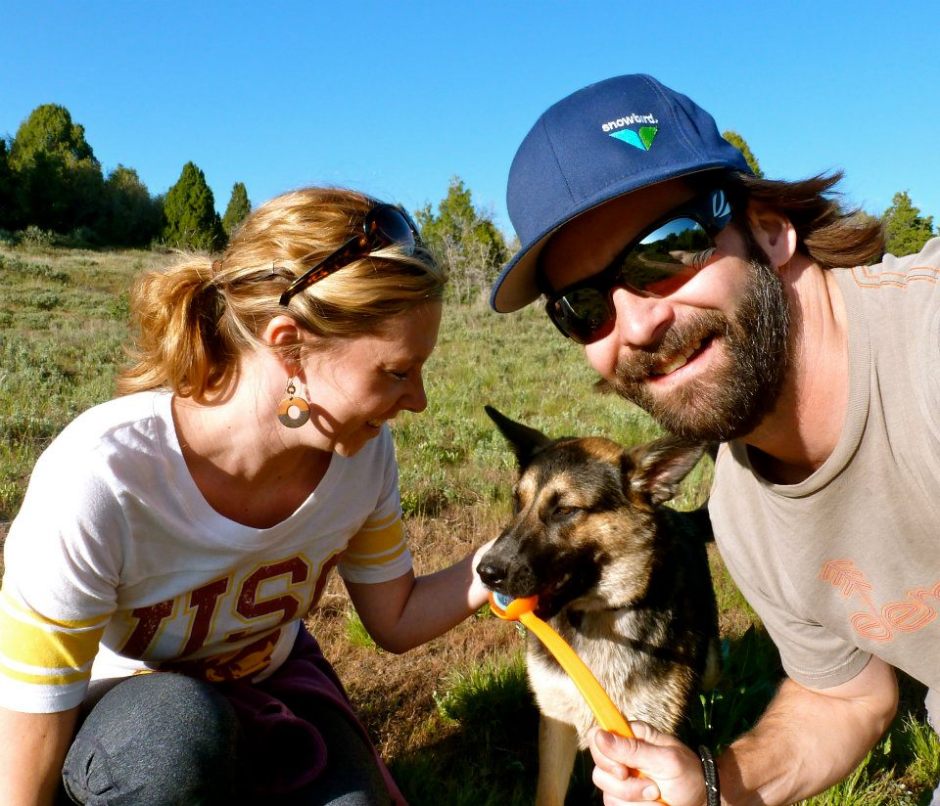 Cholula’s a good girl. Good girls deserve treats. And what does a dog love more than anything else? BACON. So that’s where I started. (The birthday girl stayed close and got to lick the bacon wrapper.)

The recipe I used called for peanut butter. I thought we had plenty in the pantry, but I’d forgotten that I share a home with a midnight snacker. Three almost-empty containers of peanut and almond butter gave me enough for the base of the dough. After whisking the butters with an egg and some milk, I added whole wheat flour, baking powder, and oats. The dough was heavy, thick, and sticky. Last, I stirred in plenty of crispy bacon! 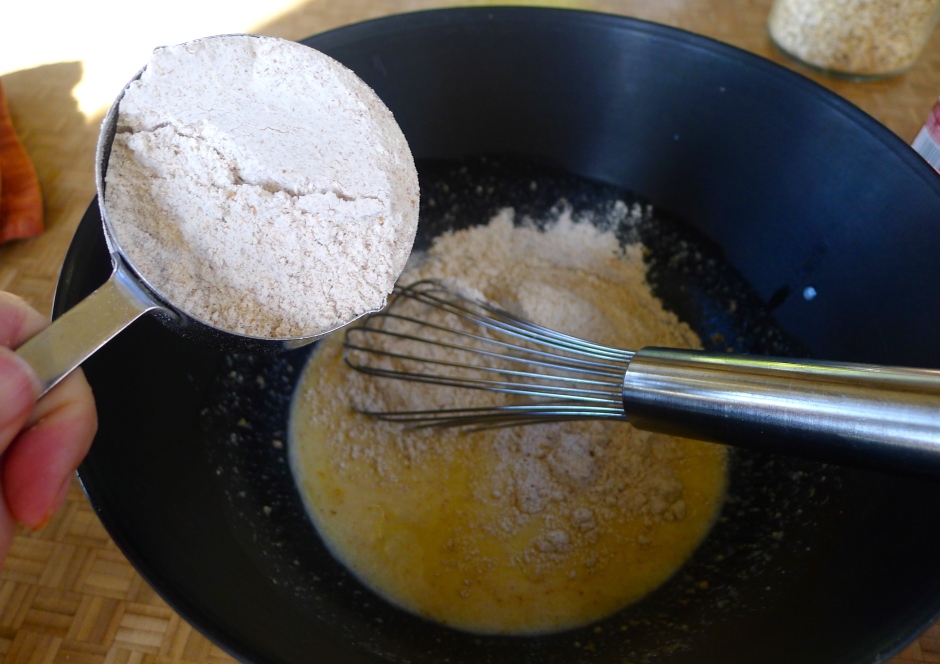 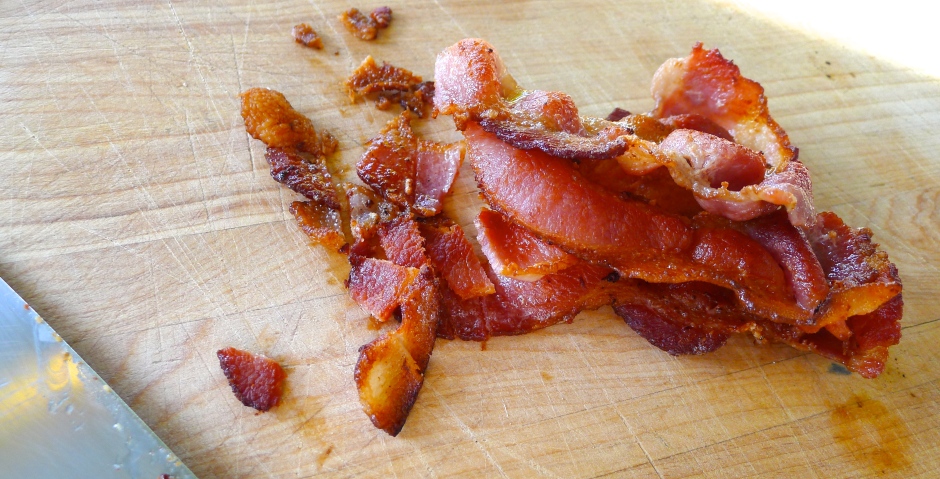 On a floured counter, I rolled out the dough to a little less than half an inch thick. I used a cute heart-shaped cookie cutter- these treats are full of love, after all. I baked the bacon-y hearts on a baking mat for 15 minutes, then flipped the cookies and baked them for another ten minutes. They got a little bit browned and I love that the bacon chunks are visible. 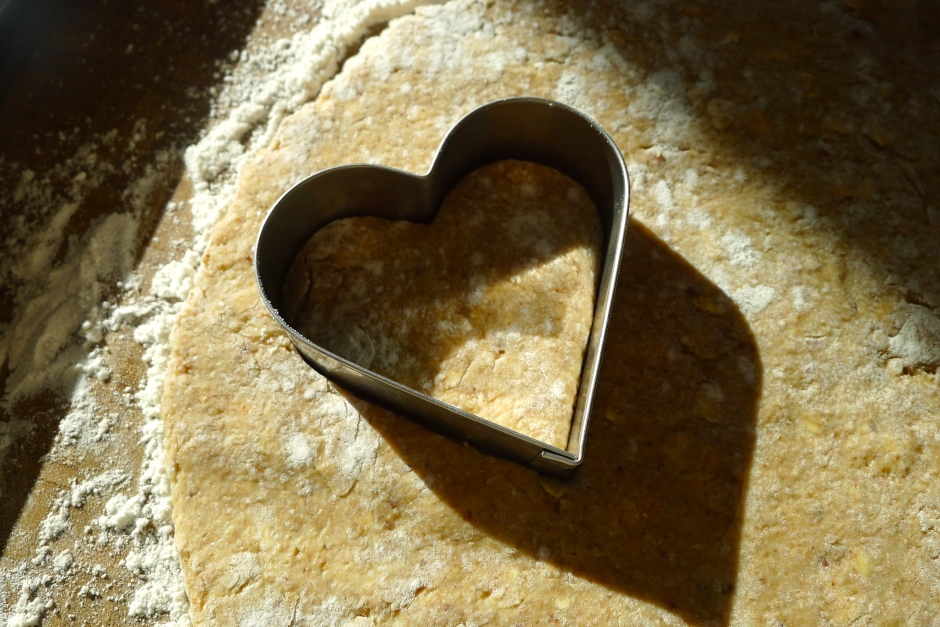 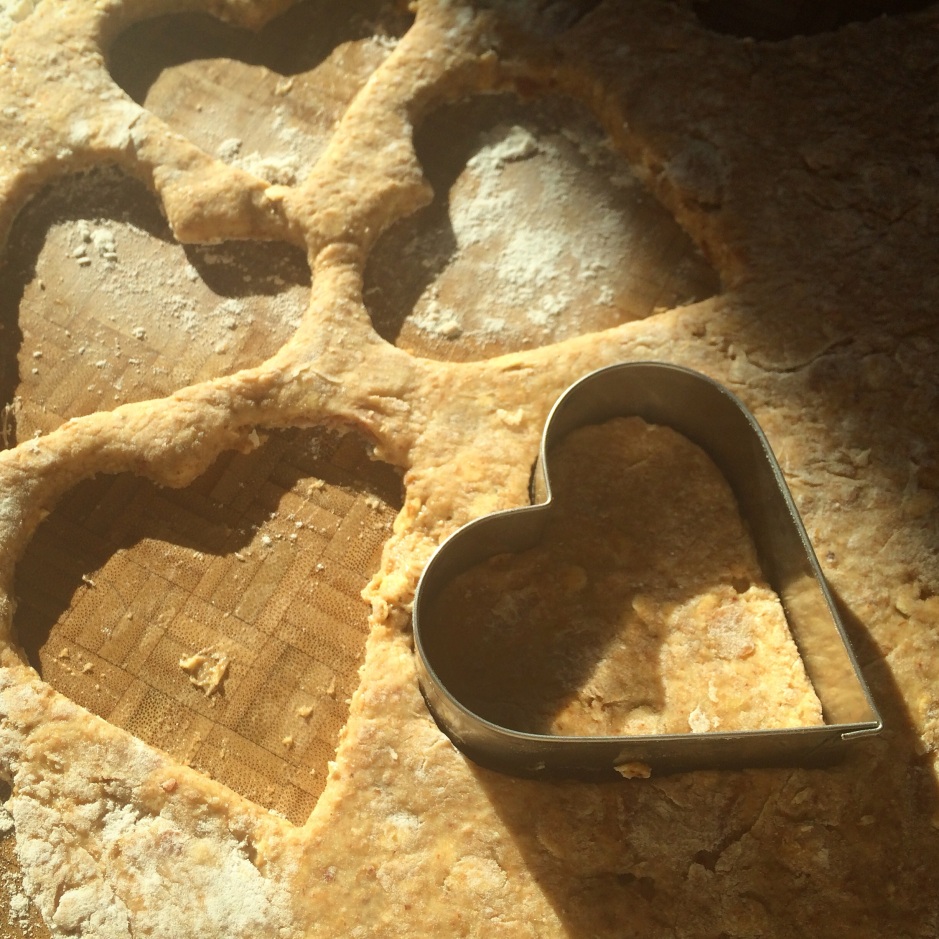 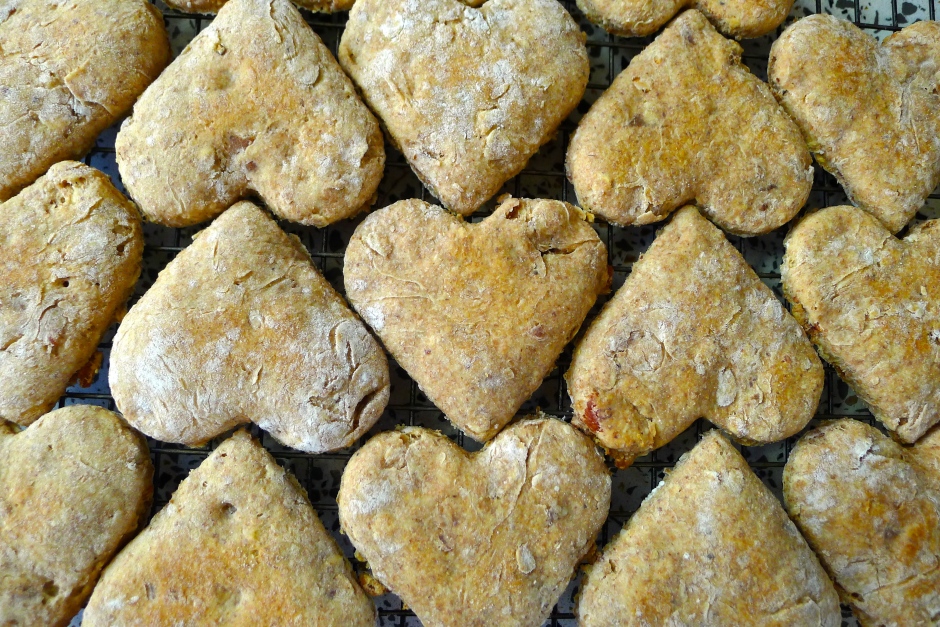 The greedy, wagging taste test (and subsequent begging for another) told me that these doggie treats are delicious! I packed them up in an airtight container and will spoil my crooked-eared buddy with them for the next week or two. 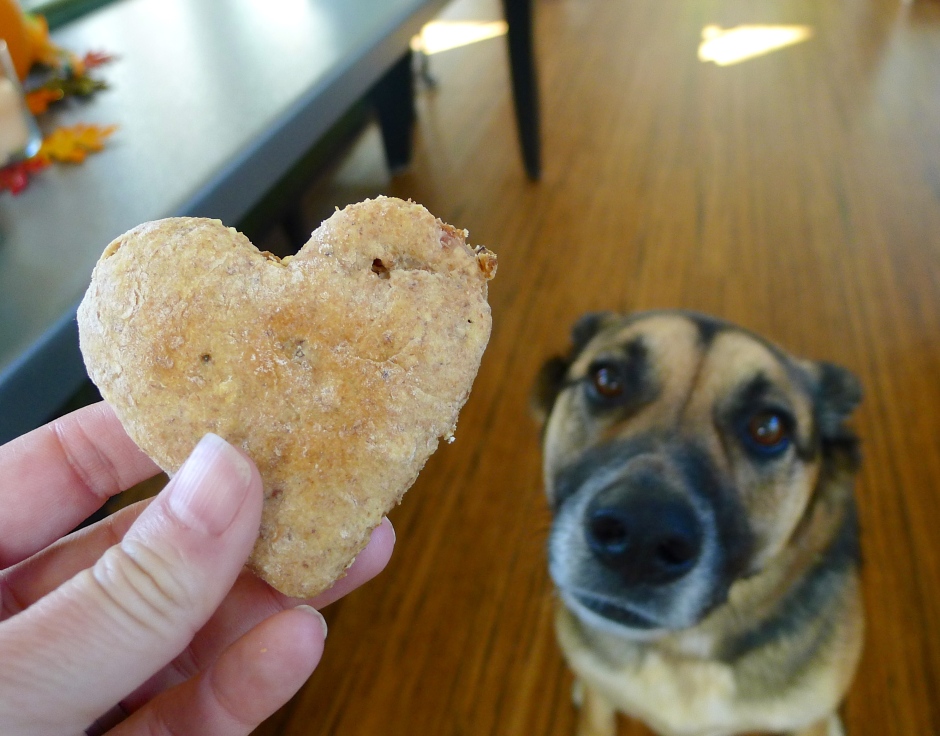 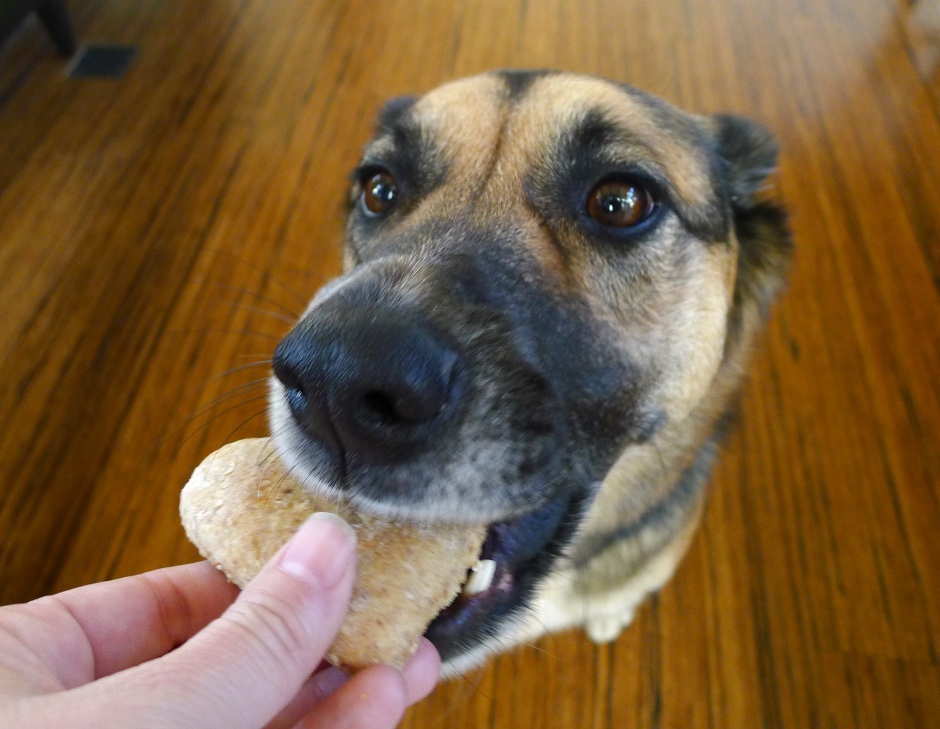 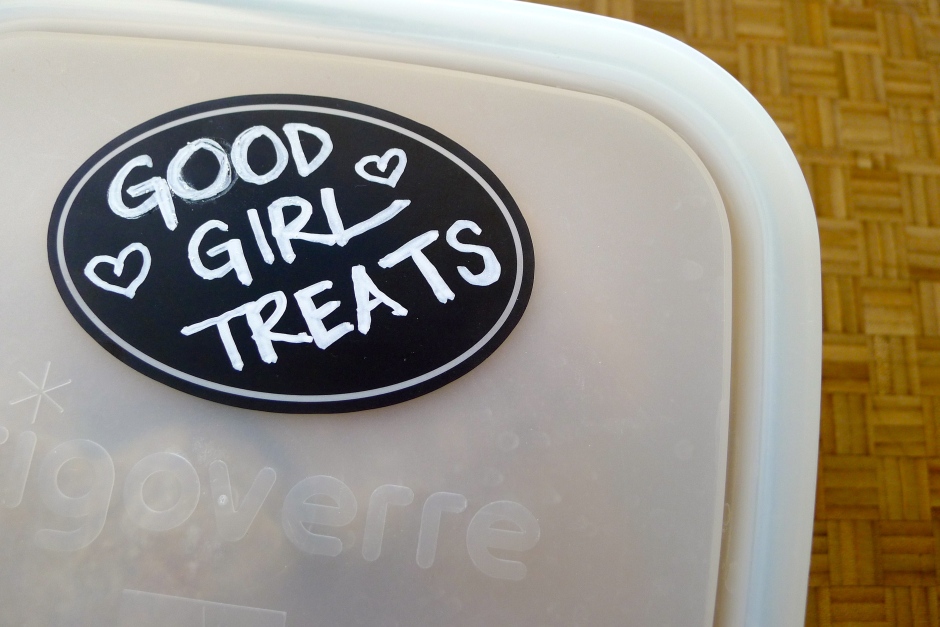 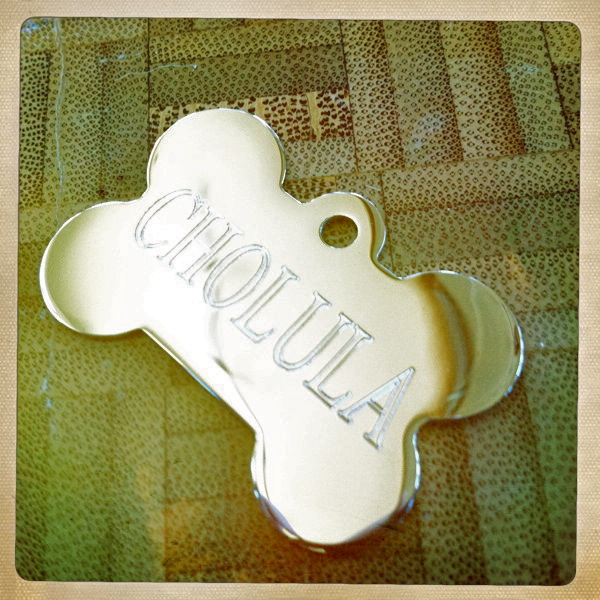 Confession: I gave her more than one doggie treat. But not too many… I don’t want her to get a tummy ache before we get a chance to head out on a birthday hike. 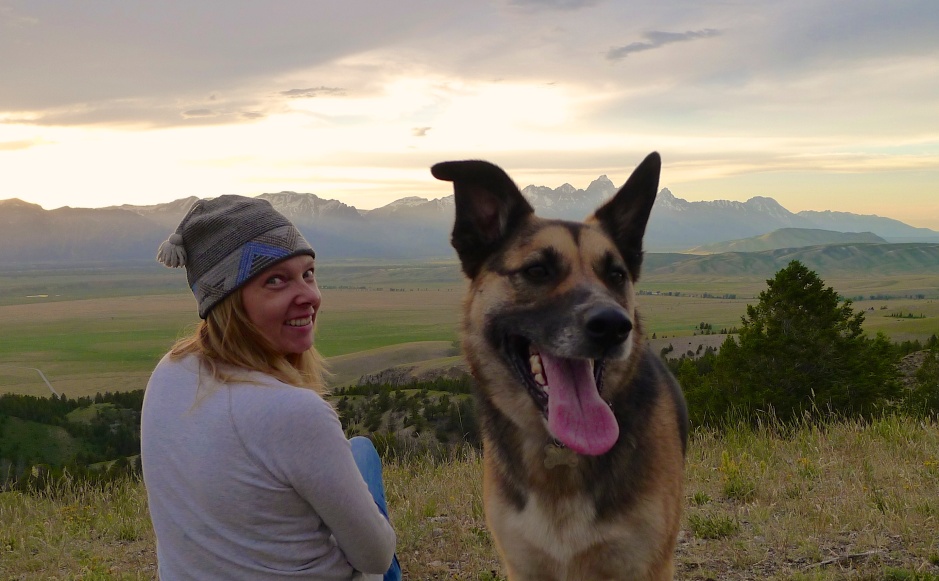 Heat oven to 325 degrees. Whisk together the peanut butter, milk, and egg. Stir in the flour, baking powder, oats, and bacon. Turn the dough out onto a floured surface and roll it to ½ inch thick. Use a cookie cutter and place treats onto a no-stick baking mat. Bake the treats for about 15 minutes. Flip the cookies and bake for ten more minutes. Allow to cool before sharing with your best doggie friend. Thank God for dogs. Woof!

Queen of the house.