If you’ve followed along here for any length of time, you know that I truly love to cook. But being comfortable in the kitchen certainly didn’t come naturally to me. When I was little, I got in trouble for eating the raw brownie dough before they’d had a chance to “bake” in the Easy Bake Oven. In junior high, I took a class called Creative Cookery in which I literally learned nothing, except how to successfully and repeatedly bribe another girl to do my share of the dishes.

In my early 20s, I was living in an itty-bitty cottage in Colorado, tucked into a corner of my landlord’s large yard. It was basically a studio, one room that was just barely big enough for my couch and TV. My “bedroom” was a mattress-sized platform over the couch, accessible by a ladder (but not quite high enough to avoid bumping my head frequently). In one corner was a bathroom and in another was a door-less closet; both rooms were approximately the same size (miniscule). The kitchen area included one of those half-sized stoves and a full-sized refrigerator; there wasn’t room for the doors on both to be open at the same time. But the little cottage had plenty of windows, flooding it with natural light. The old heater worked well. I didn’t have many belongings at that stage in my life, so the size wasn’t an issue. It was an adorable blue “tiny house” nestled under shady trees, with a little deck where I potted plants and parked my cruiser. In the summer, I liked to read in the sunlit yard with my landlord’s cat purring next to me. In the winter, I shoveled a snow tunnel to the door and hung Christmas lights. It was my first experience living alone, and it was bliss. 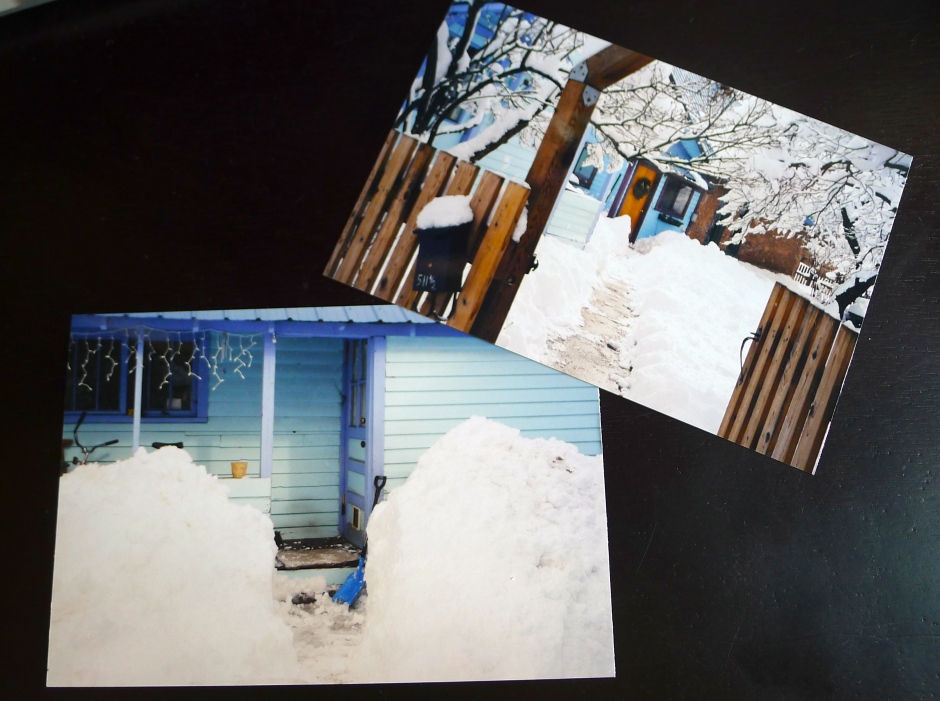 In the two years that I lived in the cottage, my microwave was probably the most popular appliance in the kitchen (except, of course, for the coffee-maker). I was waitressing at two restaurants and eating quite well, thanks to my employee discount and after-shift meals. Chalk it up to feeling grown-up and independent (I did live alone, after all), but one day, I came across a recipe in magazine and thought, I can do that. It was the first time I remember being interested in a recipe, making a grocery list, buying the ingredients, and following the step-by-step instructions to create something that was actually edible.

The recipe was Creamy Curried Chicken and Rice Casserole. I still have it tucked into one of my recipe binders, a wrinkled clipping from a late-90s issue of Self magazine. I probably used a dull steak knife to chop the veggies and definitely had to purchase a pan in which to cook the casserole, but I was determined.

The short recipe actually had many separate steps: cook and chop the chicken, prep all of the veggies, prepare the rice, make the sauce, bake the casserole. I remember thinking that this was a ton of work! Did people really do this every night, after work? My clumsy hands and inexperience with measurements made for a long afternoon in the kitchen, but I poured a glass of wine, put on some jazz, lit a candle, and enjoyed the process. I made an appalling mess. Thankfully, the casserole dish fit into the tiny half-oven (I learned later that a cookie sheet wouldn’t). I’ll admit that I was pleasantly surprised at the outcome: the casserole was delicious and it fed me for days. It was my very first taste of culinary success, and now that I had a legitimate recipe under my belt, I had confidence to try others. For years, I’d see a recipe that sounded interesting and think, I can do that. So I did. Fifteen years later, that’s still how I approach a new recipe. I pour a glass of wine, play a little music, light a candle, and dive into it. I make colossal messes. I’m not always successful, but with each culinary triumph, I gain confidence in my abilities. Cooking no longer intimidates me, and the kitchen is my happy place.

These days, I have two (!) adult-sized ovens. I have room to move in the kitchen, and stacks of dog-eared cookbooks, worn and stained from frequent use. I have casserole dishes in various sizes and more than one knife. But I still remember the feeling of bumping around that tiny cottage kitchen, the exhilaration of trying something new and unknowingly embarking on what would become a great love affair with cooking. In honor of those blissful days of youthful energy and self-discovery, here’s a ramped-up version of the recipe that started it all: Coconut Curry Chicken Bake. (Scroll down for the recipe.)

I started by cooking a cup of brown rice and letting it cool. In the meantime, I chopped up two chicken breasts, sautéed it in a combination of a little olive oil and butter, and set it aside. 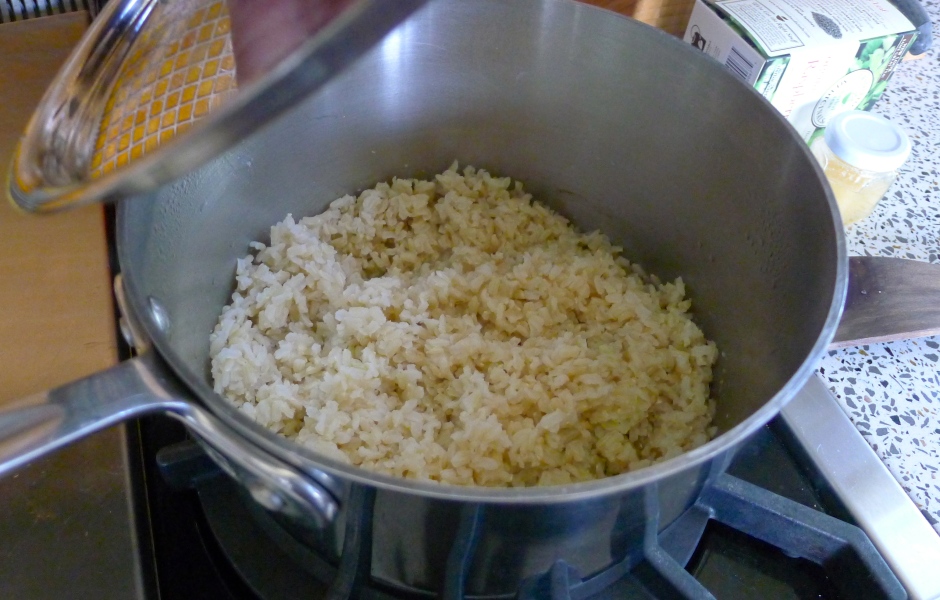 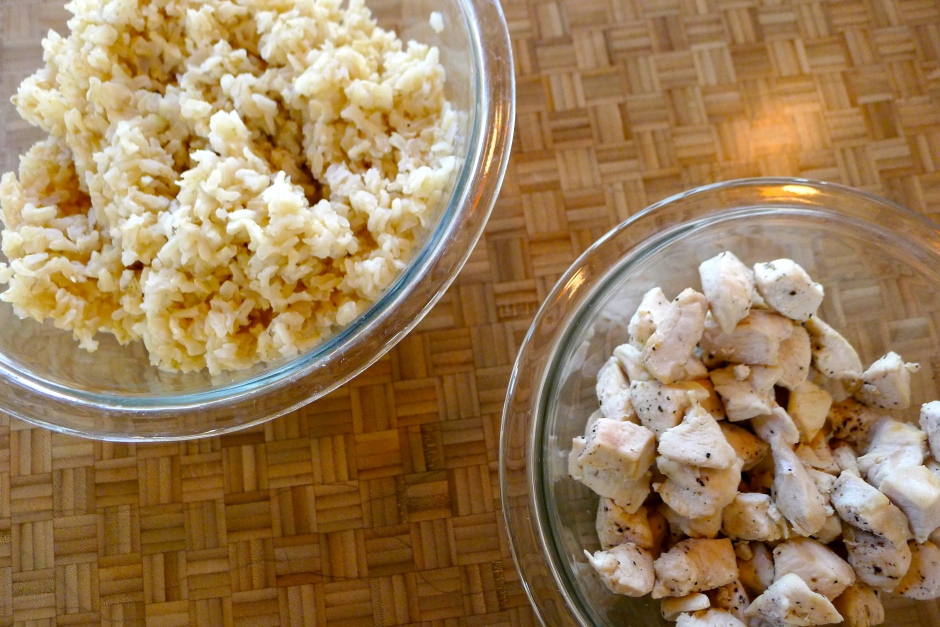 Next, I (actually, John) chopped a rainbow of veggies: carrot, red bell pepper, jalapeño, garlic, fresh ginger. I also took some frozen corn and frozen shelled edamame out of the freezer to thaw. I love the color!

In a medium-heat pan, I sautéed the onion in a swirl of olive oil. After a couple of minutes, I added the carrot and bell pepper and plenty of salt and pepper. When those veggies had started to soften, I added the garlic, ginger, and jalapeño. Look how beautiful this is! 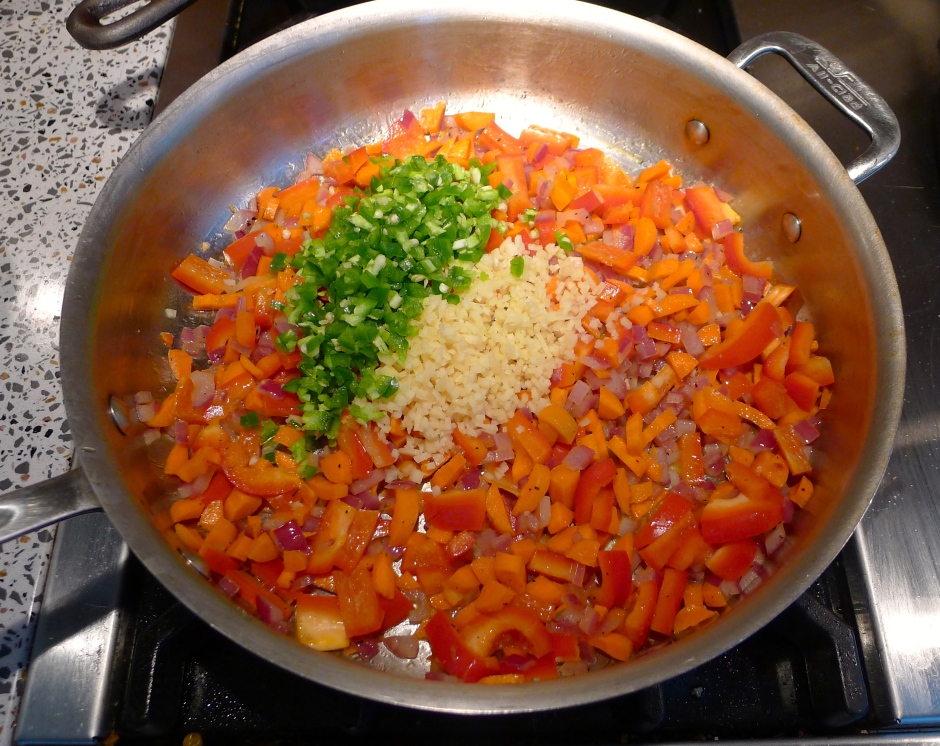 And now for the curry: a generous tablespoon, stirred right into the veggies. I poured in an entire can of light coconut milk (cream top and all) and watched the mixture turn into creamy, curry-yellow deliciousness. The last of the veggies to go into the pan were the corn and edamame. I also stirred in a handful of chopped cilantro and some basil. After a few more minutes to allow flavors to meld, I took a taste and adjusted seasoning (more salt). I squeezed in just a tiny bit of lemon juice at the end. 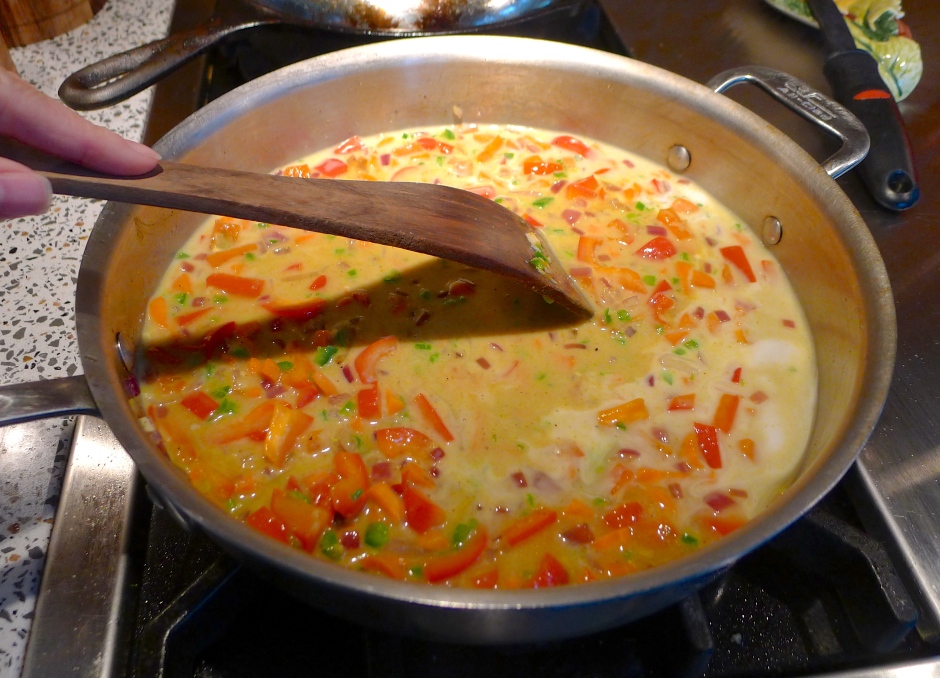 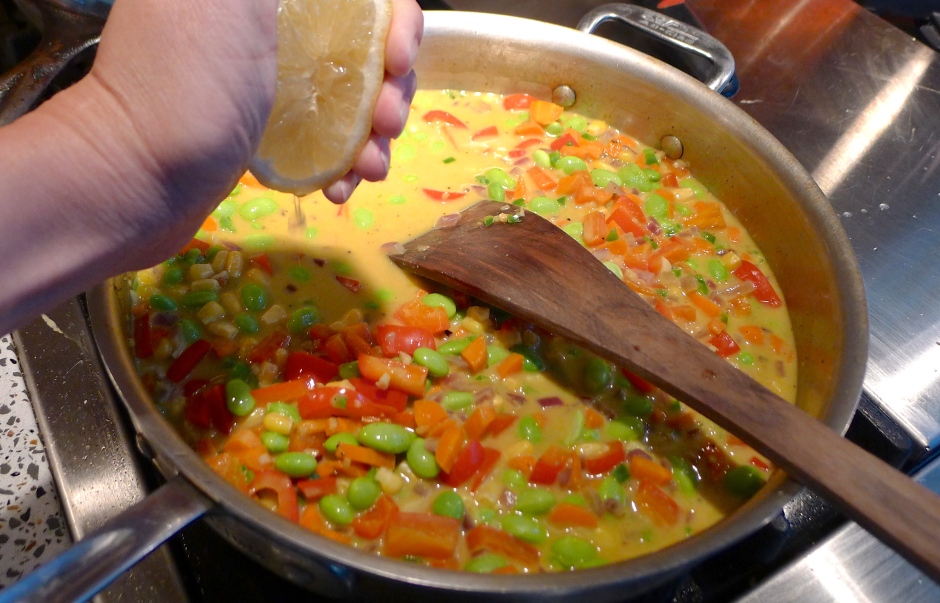 In a large bowl, I combined the cooked rice, the chicken chunks, and the veggie-curry mixture. Then the whole mess goes into a sprayed casserole dish and gets topped with some Panko breadcrumbs. I like a little crunchy topping on my casseroles! 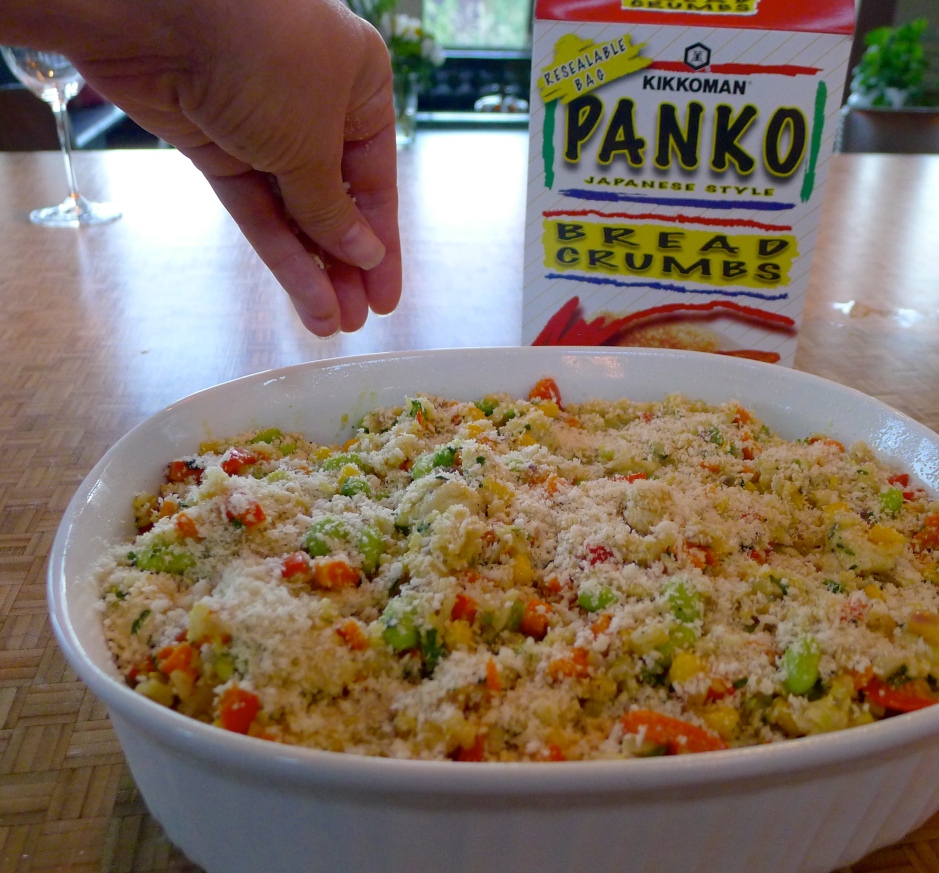 The casserole bakes for about 20 minutes with foil on the dish, then another 10 without the foil. It’s a good time to set the table and pour a nice glass of wine. If you’re lucky, a handsome hubby will dive right into the dishes!

When the casserole is done, the topping has browned a bit. I scooped a ladle-full of creamy goodness onto each plate and topped them with more cilantro and chopped peanuts. YUM. Each bite has some brown rice with its slightly chewy texture, various still-crunchy veggies, chunks of chicken, and the coconut-y curry sauce. It takes like a decadent meal but is chock-full of healthy ingredients.

I’m sure I had a similar satisfied look on my face after I tasted that very first casserole, fifteen years ago. Cheers to trying something new- and falling in love with it.

In a medium-heat saucepan, swirl in a little bit of olive oil. Add the onion and sauté for a few minutes. Add the carrot and bell pepper and continue to cook. When those veggies are softening, add the garlic, ginger, and jalapeno. Season well with salt and pepper. Stir to combine and cook for 2-3 minutes. Stir in the curry powder, followed by the coconut milk. Add the edamame, corn, most of the cilantro and basil, and lemon juice. Continue to cook for a few minutes, then remove from heat.

In a large bowl, combine the cooked rice, cooked chicken, and the veggie-curry mixture. Stir well to combine, and pour into a sprayed casserole dish. Sprinkle a light layer of Panko breadcrumbs over the top of the casserole and cover it with foil. Bake for 20 minutes and then remove the foil. Bake for another 10 minutes, or until the breadcrumbs are browning. Serve topped with cilantro and chopped peanuts, and clink a glass to discovering a lifelong love. Yum!