As I’ve mentioned before, cooking didn’t come easily to me. The most important lesson I think I’ve learned in the last fifteen years is to be brave in the kitchen. With the confidence to try new things, I’ve surprised myself often with what ends up on my plate. I’m constantly seeking ideas to jazz up my own recipe ideas, and last week, that inspiration landed in my inbox from What’s Gaby Cooking. She made a pizza with corn, jalapeños, and chorizo. Yum, yum, and yum. I confess that I didn’t even dive into her complete recipe before starting a shopping list- those ingredients were all I needed to see. 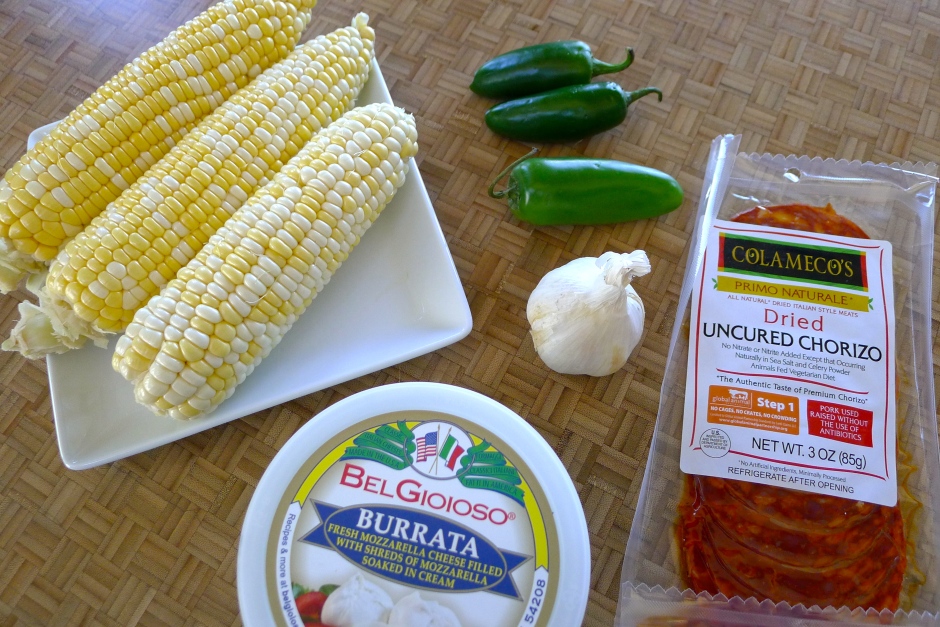 We obviously love pizza in this household, and have created some seriously delectable pies! I think I even dubbed last year the Summer of Pizza. This pizza party started like most of the others, with multigrain dough from Whole Foods and an olive oil brushing on the crust (expertly rolled by John). Where the real party happens is with the toppings. In addition to the chorizo, corn, and jalapeño, I was thinking roasted garlic, some tomatoes, fresh herbs, and (drool) burrata. If you’ve never had burrata, you’re missing out. It’s a ball with mozzarella on the outside but is extremely soft and creamy on the inside. It’s decadent and so, so delicious. 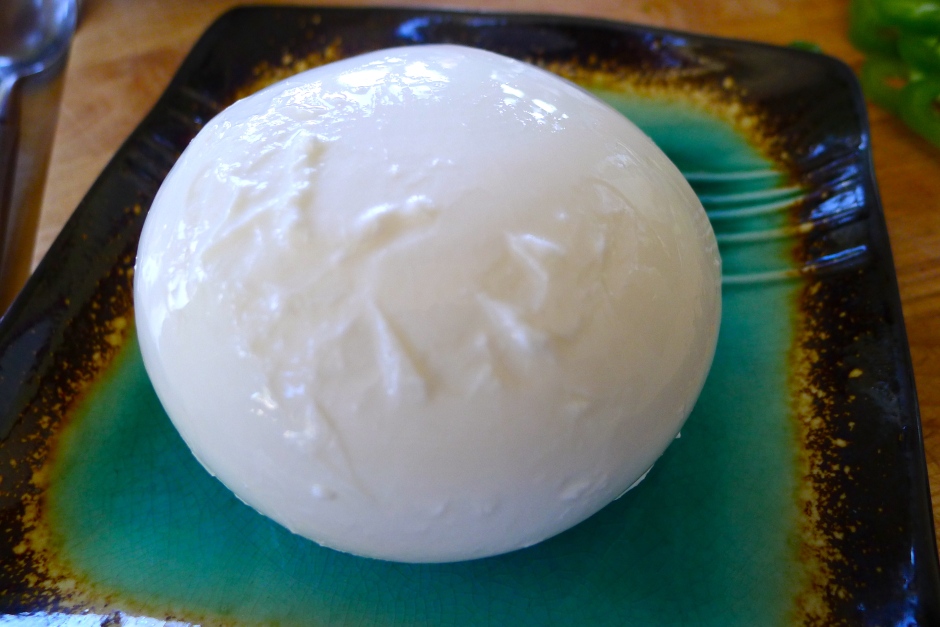 When I went to the butcher counter, there was no ground chorizo available. Instead, I picked up slices of what looked like chorizo pepperoni- perfect for pizza! On a whim, I fried up the slices in a skillet to be sure the edges would be nice and crispy on the pizza. I also started the garlic. Roasted garlic is so different than raw garlic; it’s sweeter and almost has a buttery, spreadable texture. To roast it, I slice off the very end of a whole unpeeled head of garlic. In a little bowl made of foil, I pour a couple glugs of good olive oil and place the garlic head right into it, cut side down. I wrap it up in the foil and pop it in the toaster oven at 400 degrees for 20-30 minutes or so. When it’s done, the edges of the cloves are a little crisp and they slide easily out when smooshed. For this pizza, I chopped the cloves, but left them pretty big. 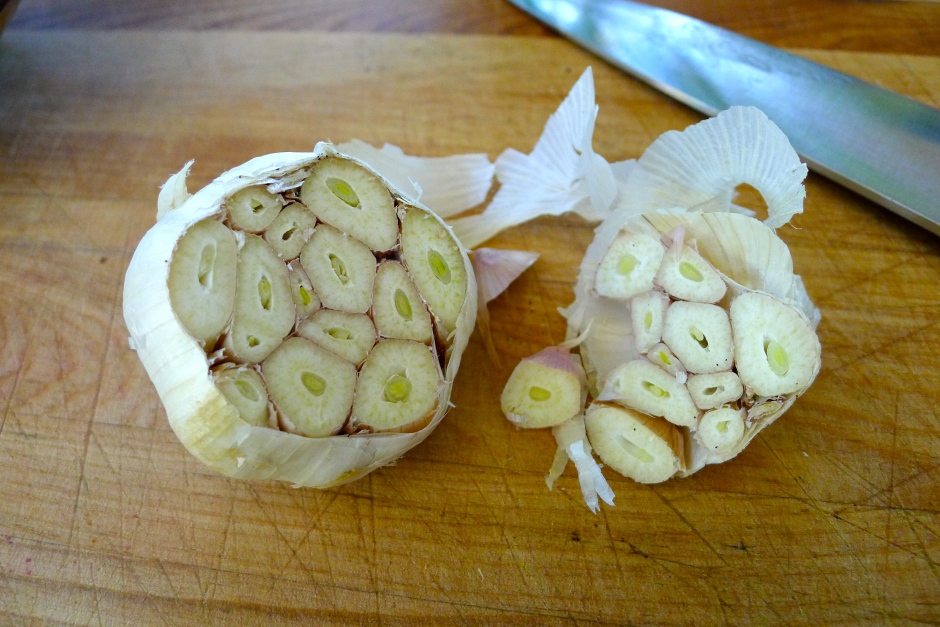 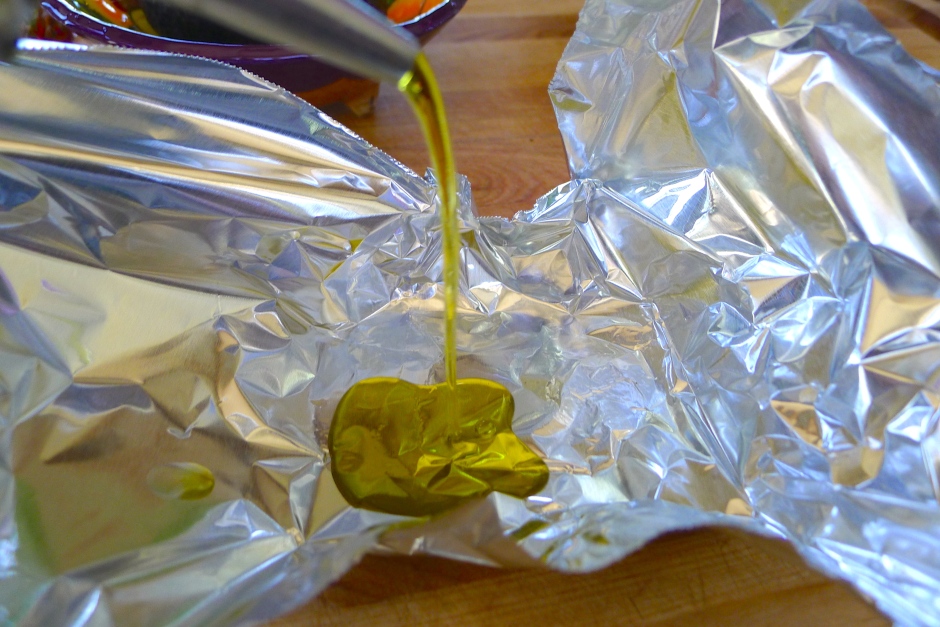 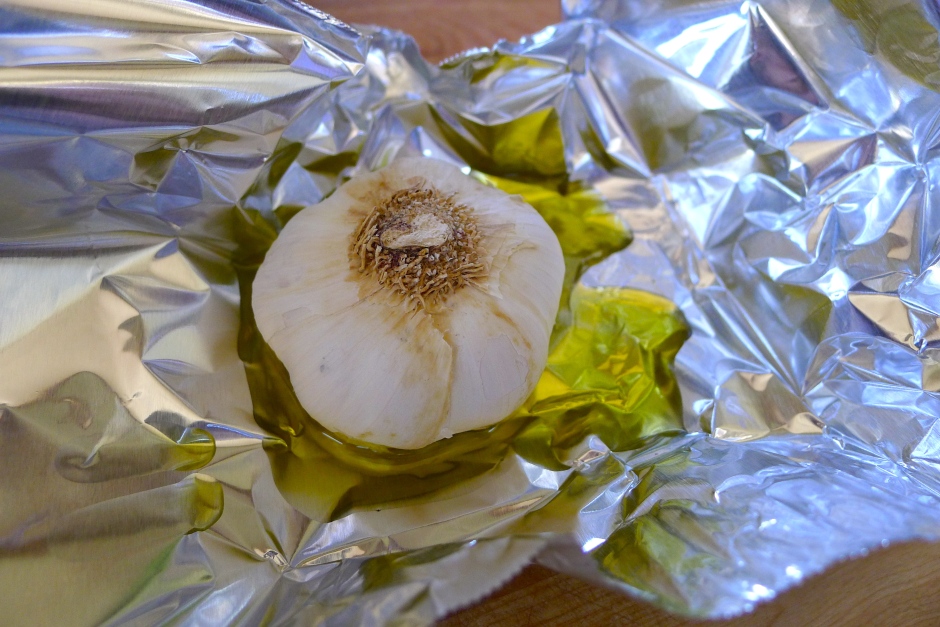 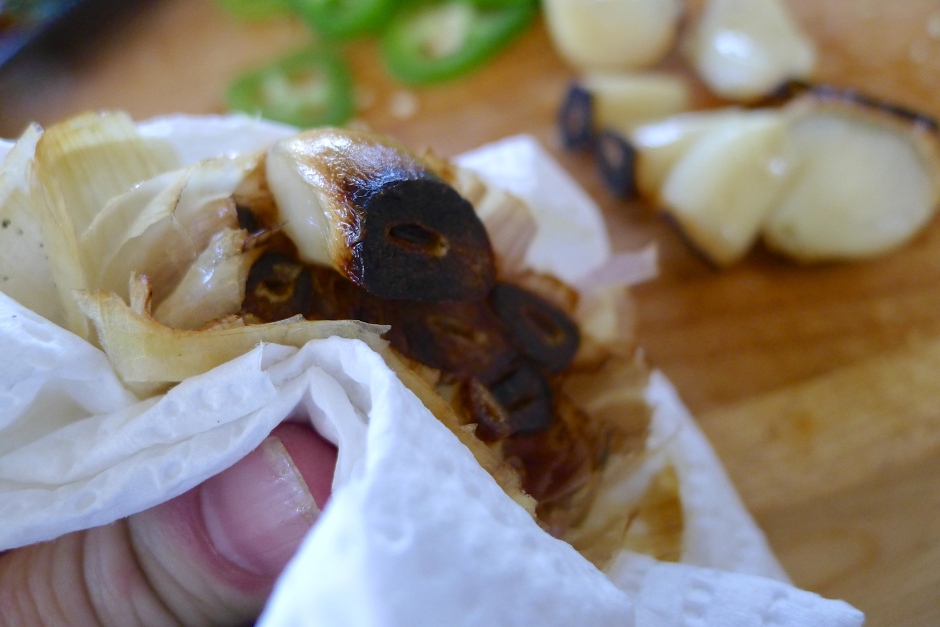 While John heated the grill, I snuck a few ears of oiled fresh corn onto it. I love when they start to pop! I got a good char on all sides, let them cool, and cut the kernels off of the cob. Once I sliced up a couple of jalapeños, the toppings were ready! John worked his magic with the dough, making sure to flour it well and using a rolling pin to get out the air bubbles. He always uses a course cornmeal and flour combo on the baking pan to easily transfer it from the pan to the pizza stone on the grill- it slides right off. 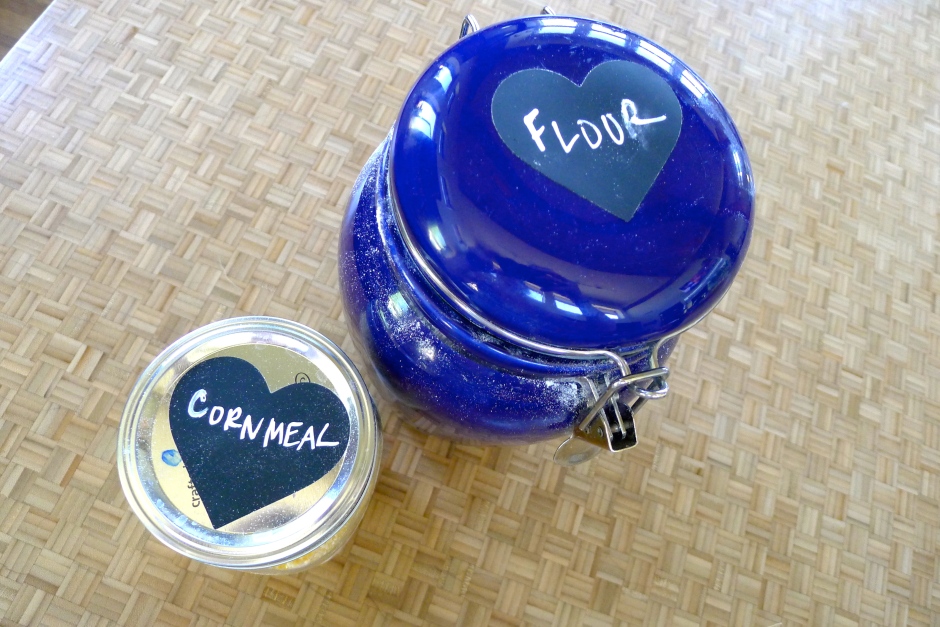 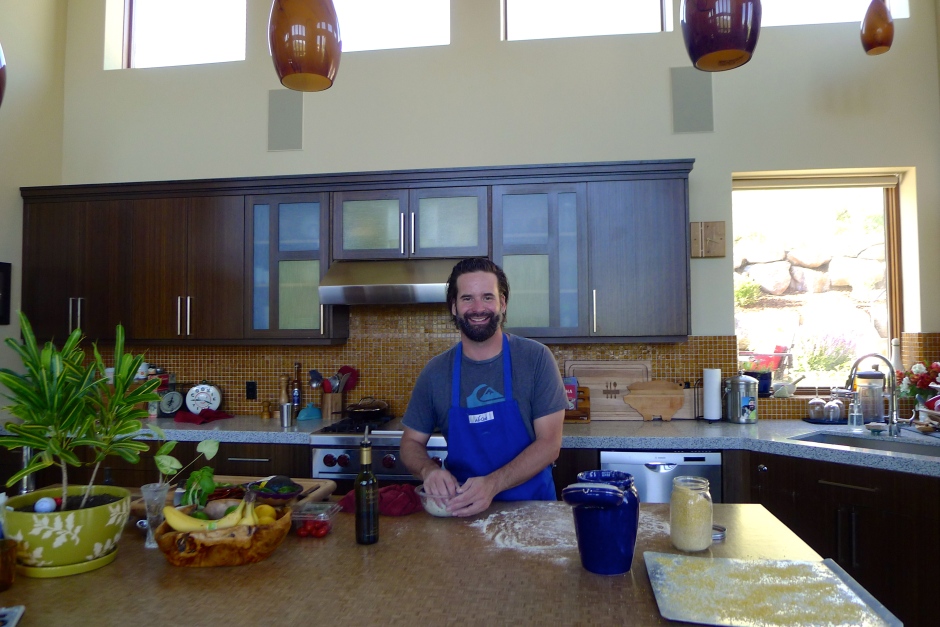 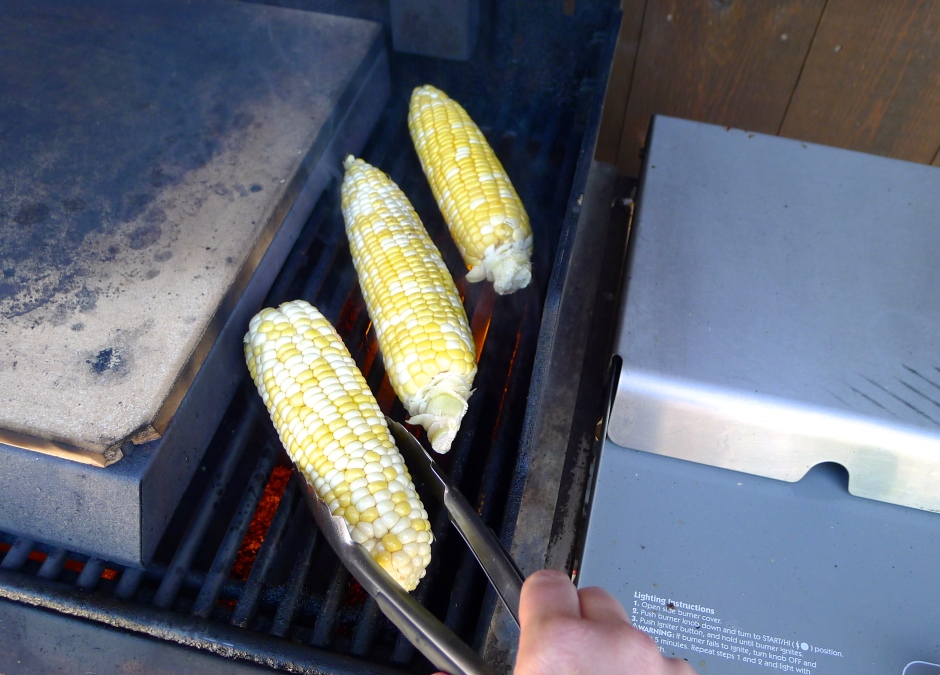 First, I brushed the whole crust with olive oil. Next came a sprinkling of garlic salt and a light layer of shredded mozzarella cheese. I added the roasted garlic chunks, some crispy chorizo slices, and the jalapeño, then sprinkled charred corn over the top. Next came spoonfuls of creamy burrata and a bit of dried oregano. To finish it up, I added just a bit more shredded mozzarella. Off to the grill!

I’d intended to top our grilled pizzas with fresh basil and some chopped tomatoes. John suggested roasting half of the tomatoes and adding them to the second pizza for grilling, so we did. We’d have one pizza with a fresh tomato topping and one with the tomato baked right in. Why not? 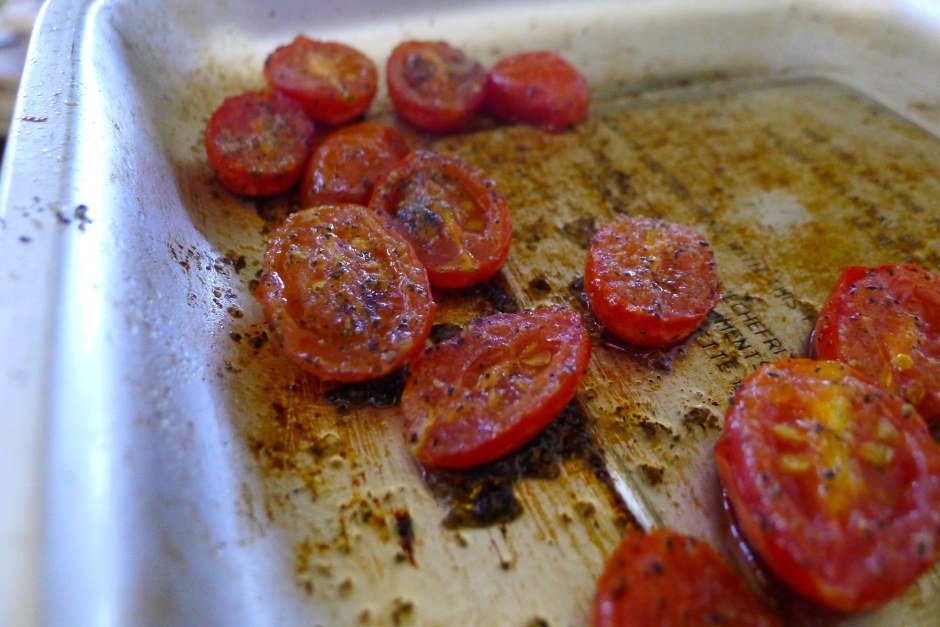 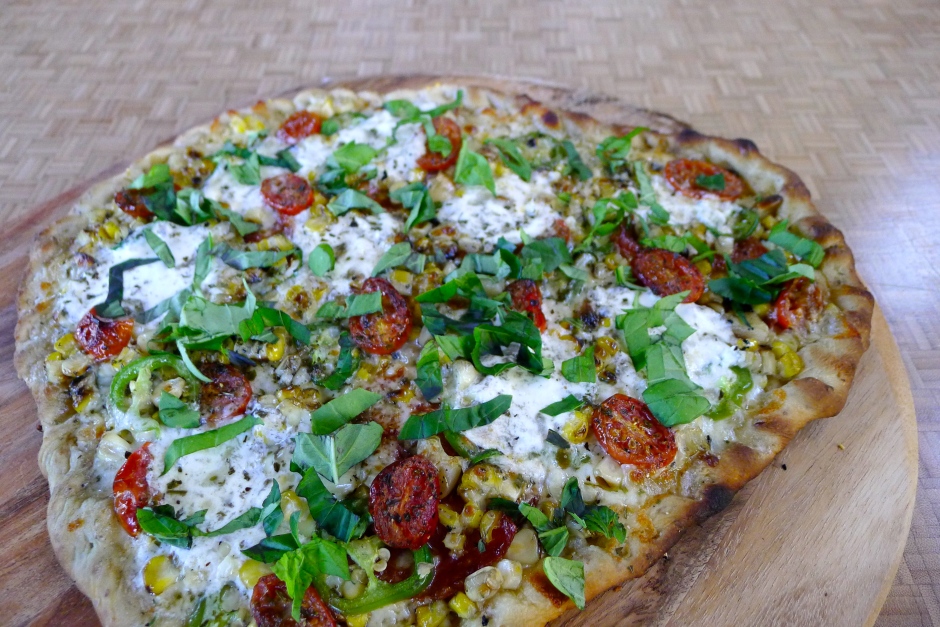 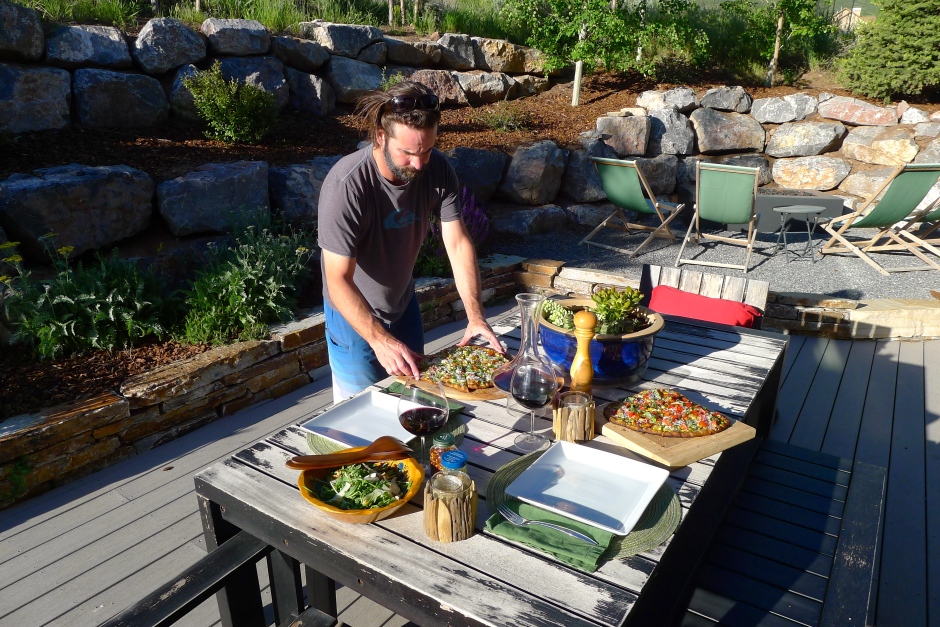 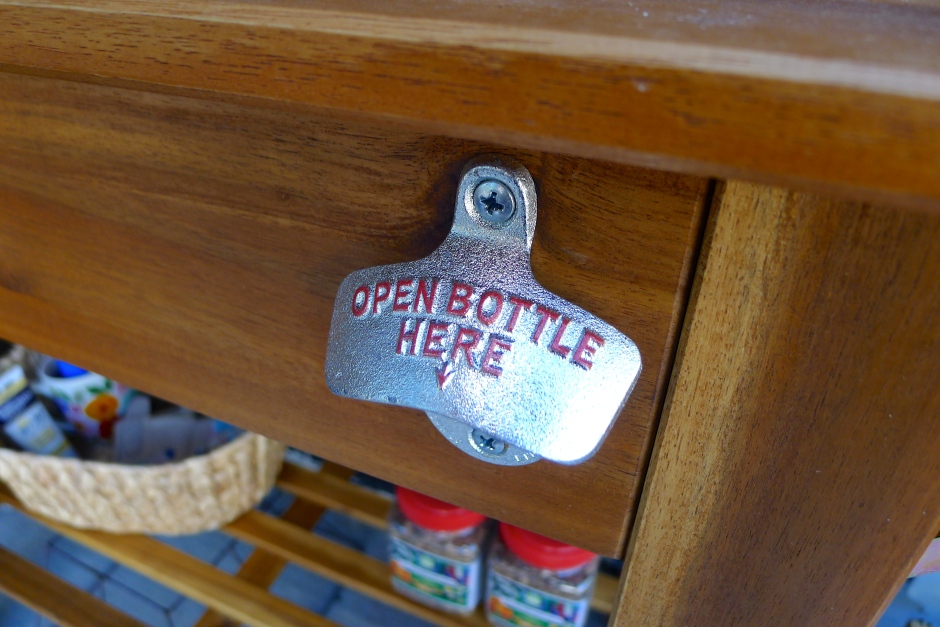 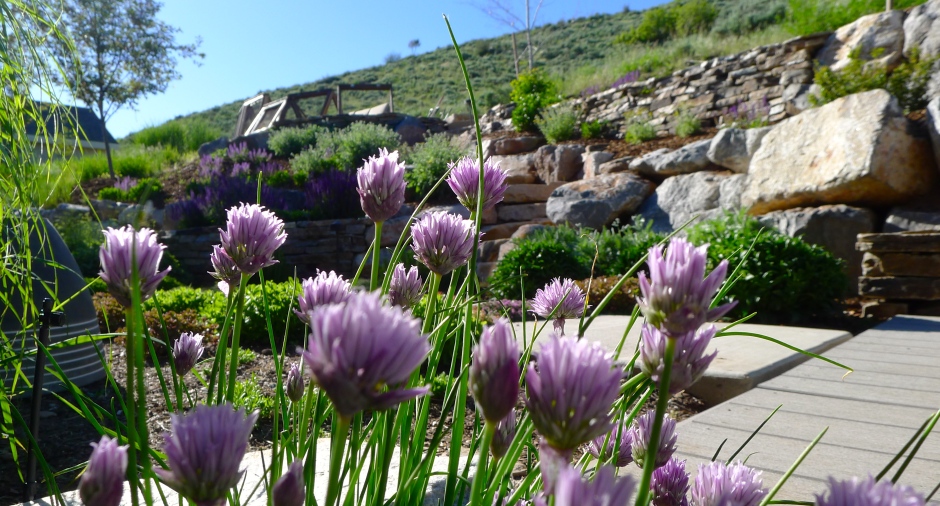 At this point, we have the crust and cooking process down pat. So we know that with delicious toppings, our pizzas will always ROCK. And this one definitely did. We ate outside again (shocker), serving our pies with a simple arugula, parmesan, and walnut salad and big red wine. 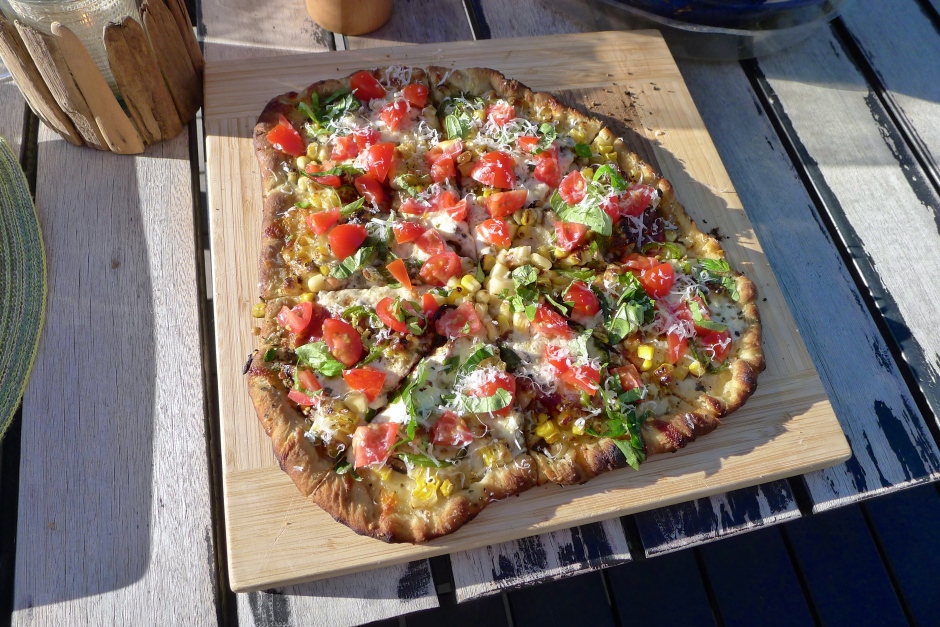 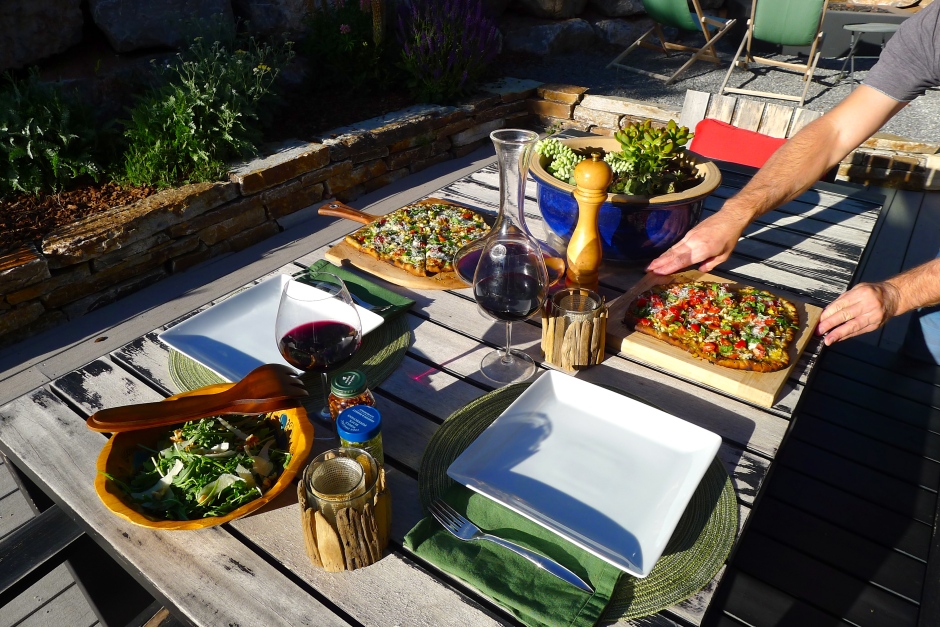 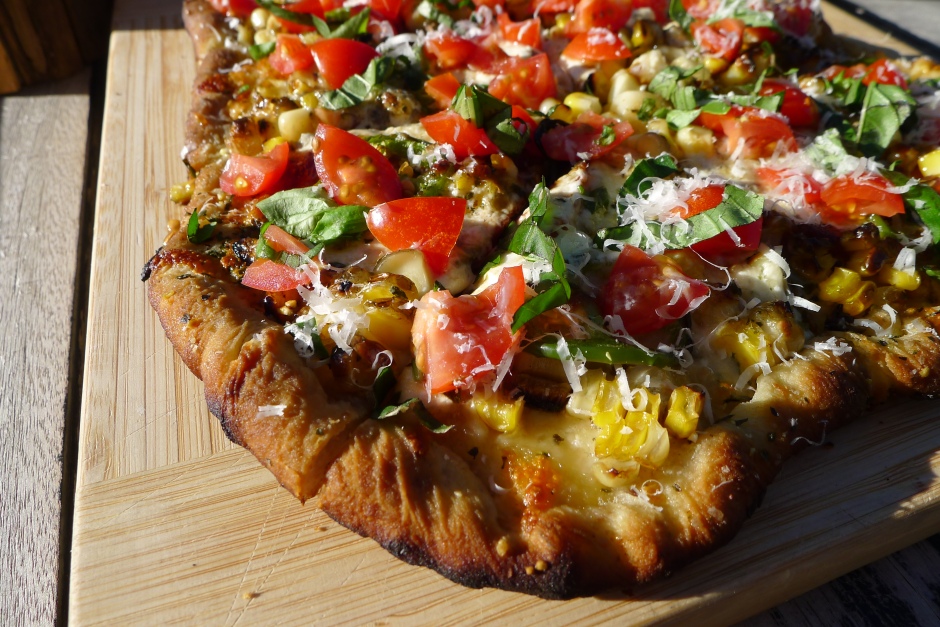 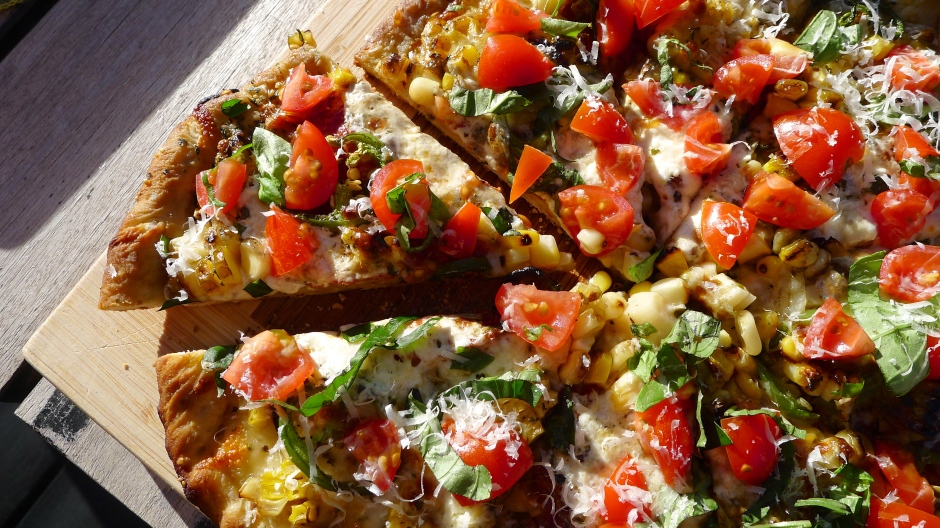 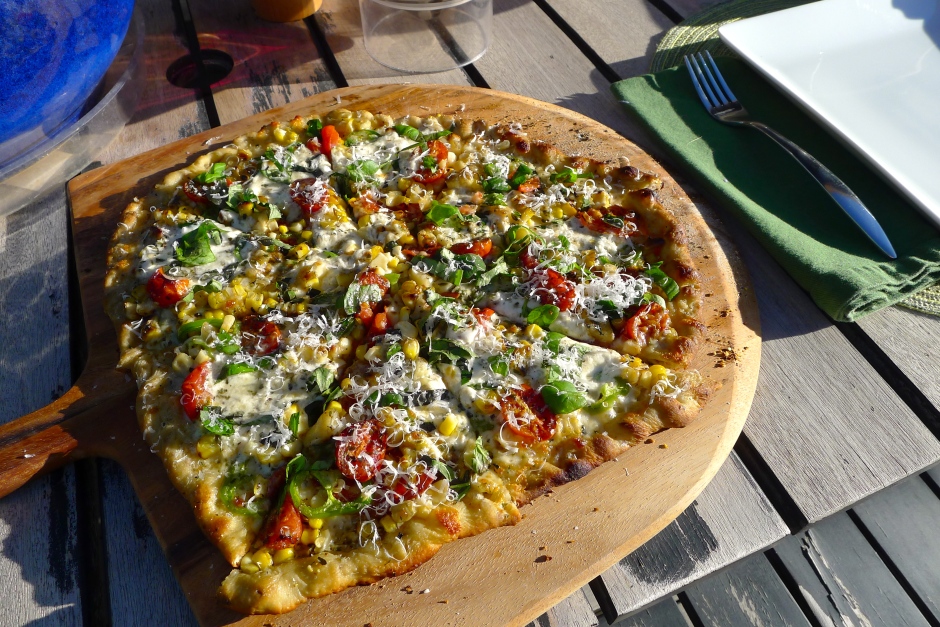 If I had to choose, I’d say the version with the fresh tomato version was my favorite because I liked the contrast between the melty cooked veggies and the raw, sweet tomato. But both were fabulous. It was interesting that the spicy chorizo wasn’t the dominant flavor- it’s smokiness melded in with the other ingredients perfectly. I’m glad I crisped up the chorizo first; it wouldn’t have had time to do that on the grill. The corn’s sweetness was delightfully strong- it’s such a classic summer flavor! And, despite the chorizo and the many jalapeño slices, the pizza wasn’t too spicy. The magical, velvety burrata calmed everything down, oozing over the ingredients and adding subtle creamy cheese flavor. 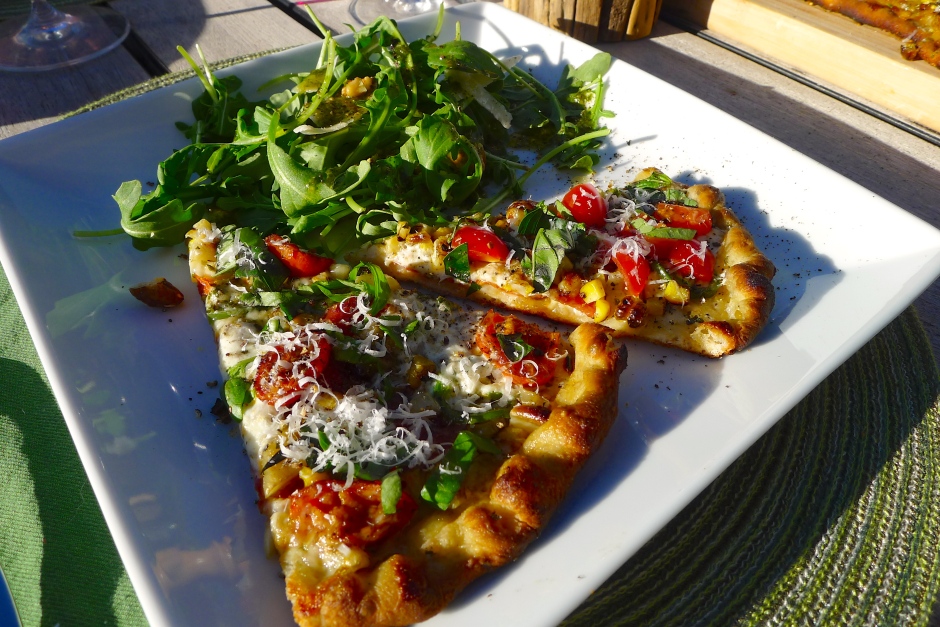 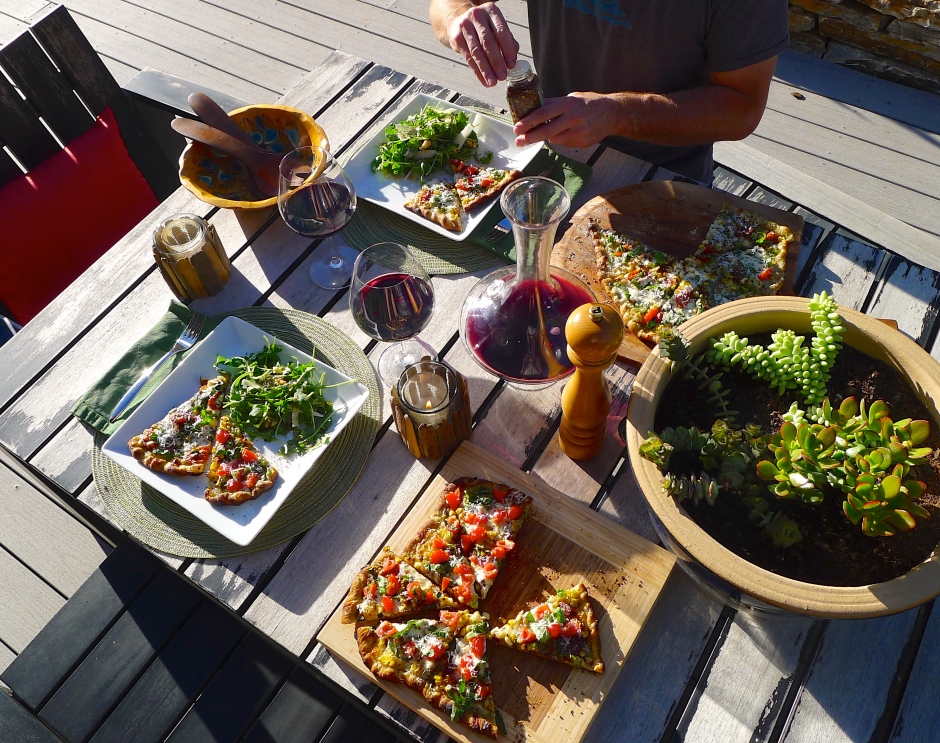 Gaby: Thanks for the inspiration! This one will be added to our summer grilled pizza rotation!

Chorizo, Corn, and Burrata Pizza with Jalapeño and Tomato (inspired by THIS)

Slice off the top of the head of garlic. In a piece of foil, pour 1-2 tablespoons of the olive oil and place the garlic head in the oil, cut side down. Wrap tightly and bake at 400 degrees for 25 minutes. When the garlic has cooled, smoosh out the cloves and chop into large chunks.

Heat a pizza stone on high heat on the grill. Rub a bit of olive oil on the ears of corn and place them on the grill, turning occasionally, until they are charred and sometimes POP. Allow to cool and slice the kernels off of the cob.

Divide the dough in half. On a well-floured surface, roll the dough to your desired thickness (we like it pretty thin!). Roll the edges to form a crust. Transfer to a sheet pan with lots of flour and course cornmeal on it. Brush the whole crust and edges with olive oil.

Slide the pizza from the sheet pan to the pizza stone (cornmeal is key). Cook for 7-8 minutes. Remove from the grill. Grate some fresh Parmesan cheese over the pizza while it’s hot. Sprinkle fresh tomatoes and chopped basil over the whole thing. Repeat with the other half of the dough. Cheers to culinary inspiration and pizza night. YUM.