We’re just about ready to take Betty on her first jaunt of the season, to trade the cute mountain town of Park City for the cute mountain town of Jackson Hole for the weekend. What a fabulous holiday the Fourth of July is: celebrating freedom and independence with sunshine, friends, and good ol’ American food. When the weather is warm, a big bowl of hot soup is not usually the first thing on the “must-eat” list. But it’s hard to beat a tasty summer corn chowder when the corn is fresh and sweet. I made a spicy batch last week and made it extra decadent by adding lobster. When you’ve finished with your Independence Day feast, you just might want to try this chowder… Super yum!

“Chowder” doesn’t have to mean heavy. I made sure to use lots of fresh vegetables and herbs, and added a can of creamed corn to give the texture of a chowder without adding a ton of heavy cream. The result was flavorful and delicious and totally appropriate for a summer evening. I started with the star of the show: two ears of fresh corn. I cut the kernels right off of the cob (and munched on any that the knife missed!). 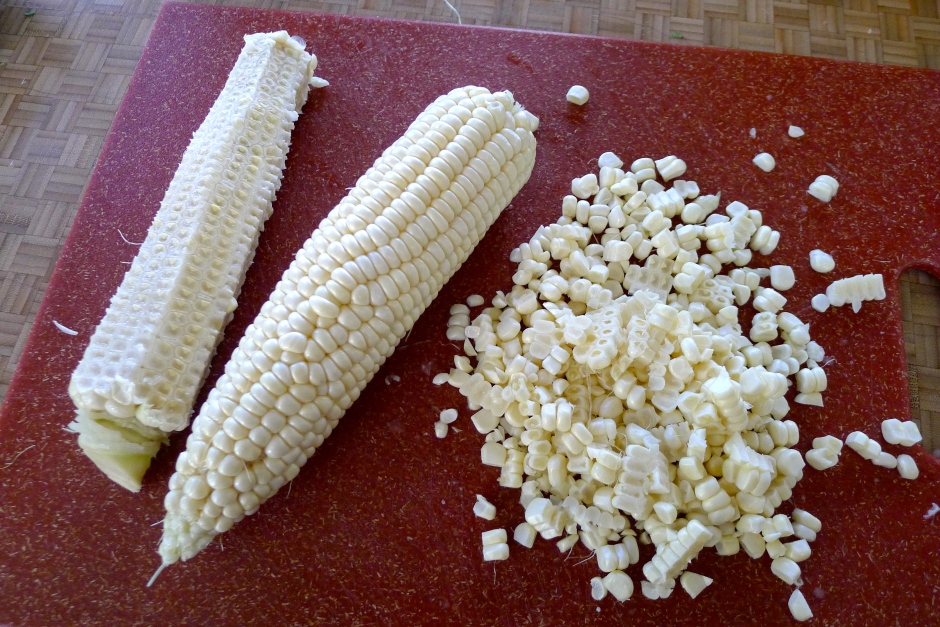 Next, I chopped up plenty of veggies: poblano peppers, a whole jalapeño (seeds and all), some celery, onion, a couple of potatoes, and lots of garlic. The more goodies, the chunkier the chowder! 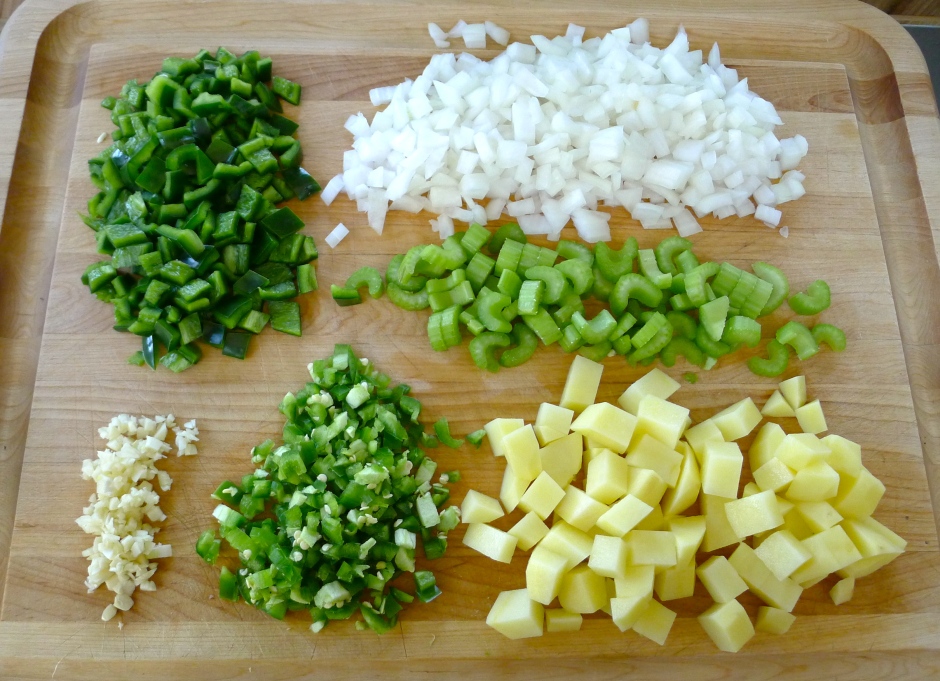 Confession: I keep a coffee mug with bacon grease on the sill, for this exact purpose. I scooped out a spoonful and heated it in a pot with a little olive oil before adding the onion. When they had become tender, I added the celery, poblano and jalapeno peppers, and the garlic. I let those veggies cook for a bit before adding the potato. After the potatoes had time to soften up a bit, I added the fresh corn and one can of creamed corn. It’s already starting to look like chowder, isn’t it? 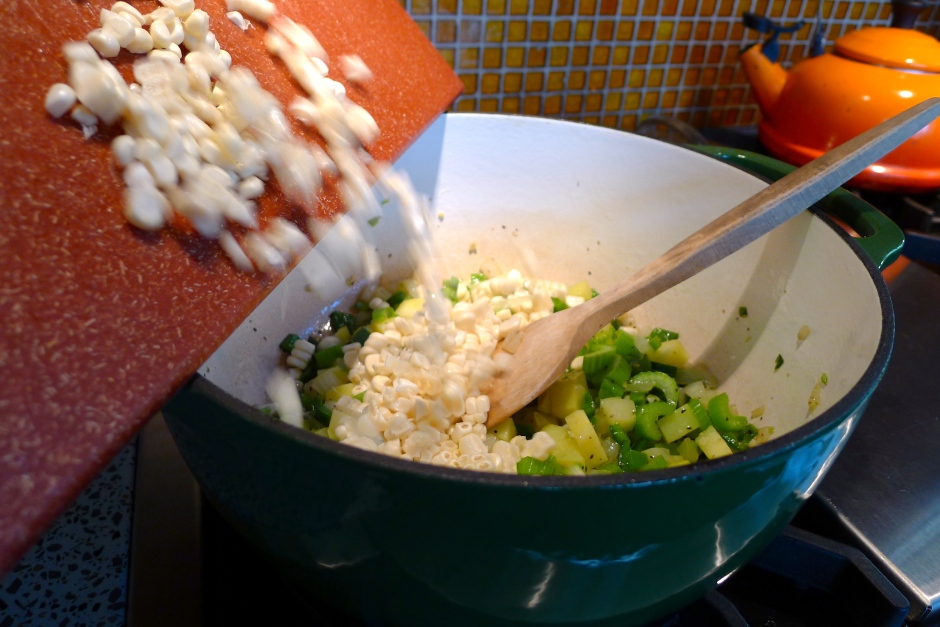 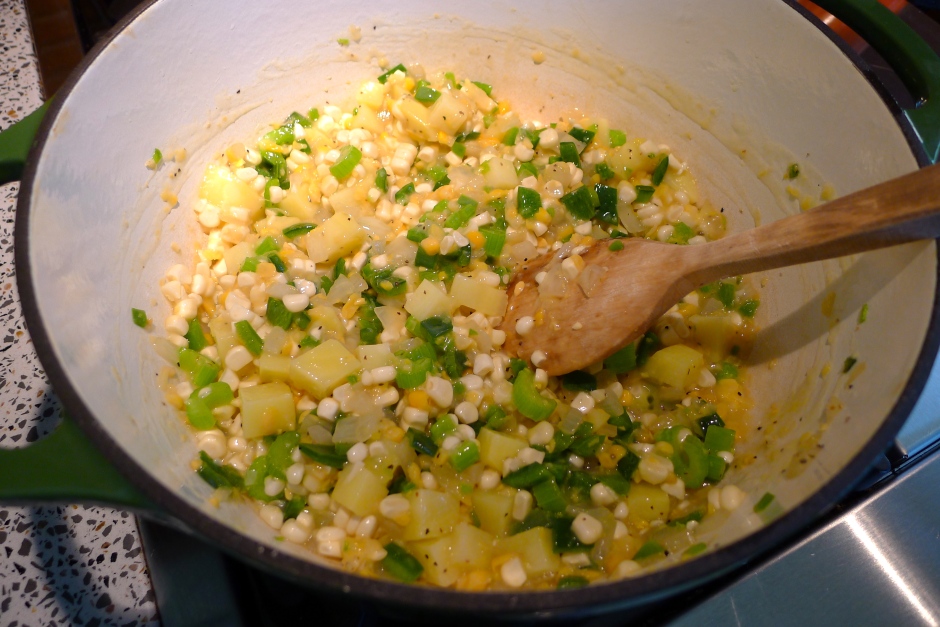 Time to add some liquids: chicken stock, some white wine, and just a smidge of half-and-half. I stirred in fresh chopped thyme, cayenne pepper, red pepper flakes, and a bay leaf. And I let it all simmer together for a half hour or so, to let the flavors mingle and deepen.

In the meantime, I chopped up the lobster meat. Whole Foods sells already-picked lobster- so easy! About ten minutes before suppertime, I stirred the lobster into the chowder and let it heat through. I also added a handful of chopped Italian parsley for freshness and color. 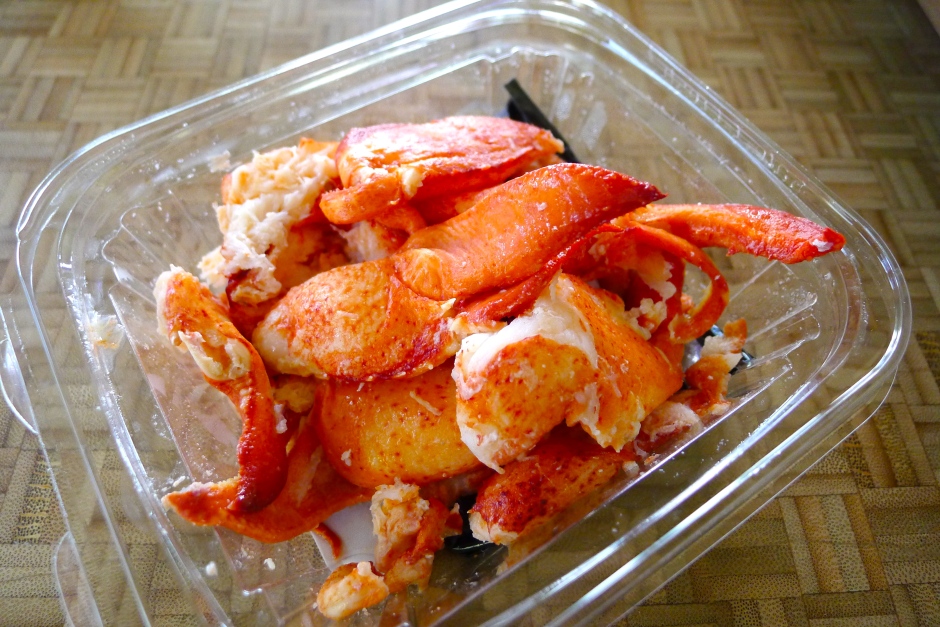 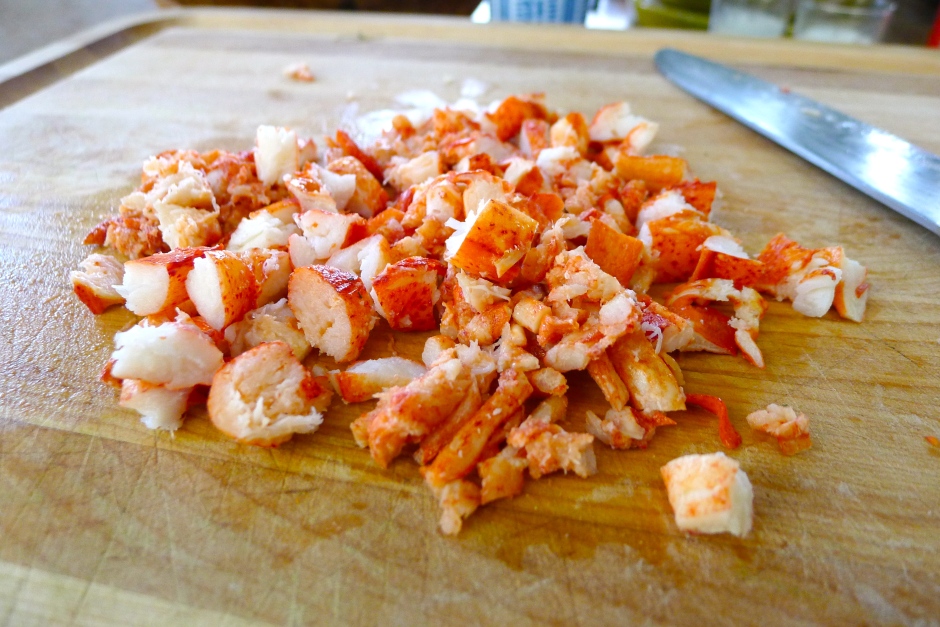 A chowder like this might often have bacon in it. I didn’t have any, but I did have a few slices of prosciutto in the fridge. I crisped it up in a skillet and crumbled it over the bowls of chowder. (You could easily leave out the bacon grease, lobster, and prosciutto for a veggie version.) Add some buttered garlic toast and it’s time to eat! 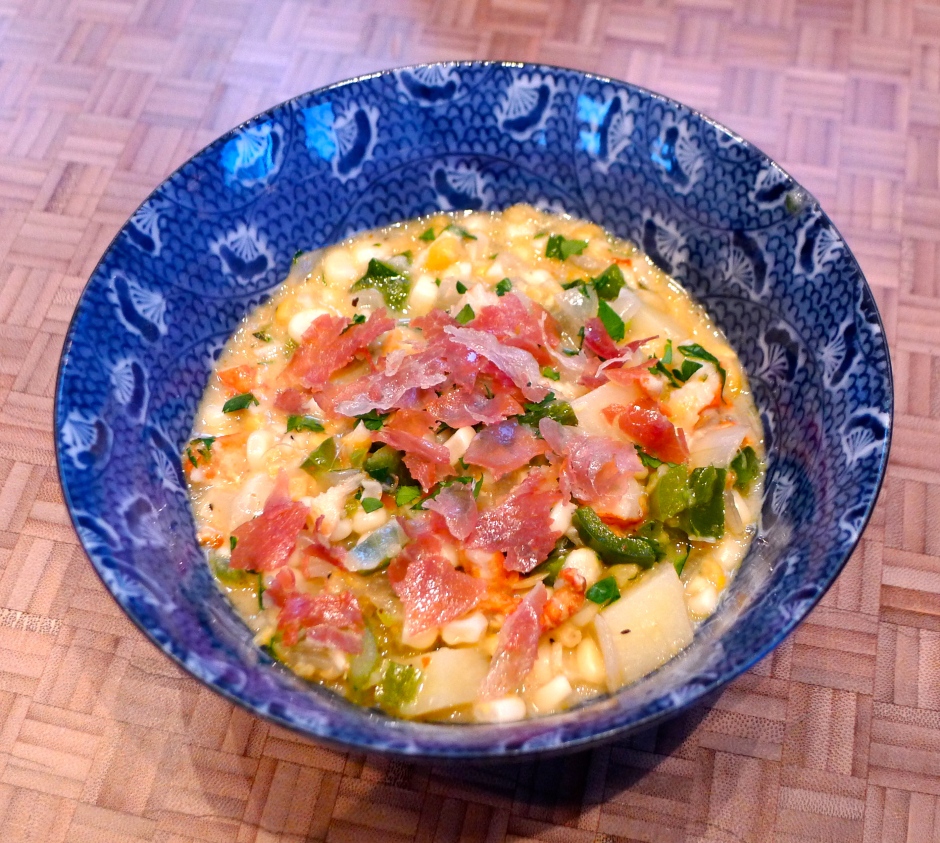 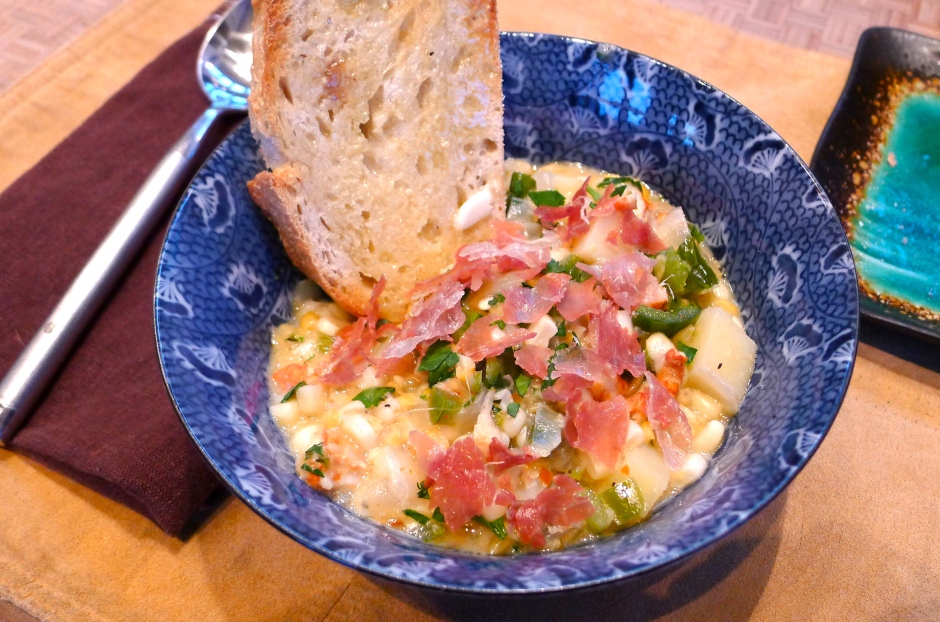 Despite all of the yumminess in the bowl, the fresh corn truly is the star– sweet, crisp, summery. The jalapeño and spices gave the chowder a decent kick of heat, which we love. The crispy prosciutto added a salty bite and necessary texture. 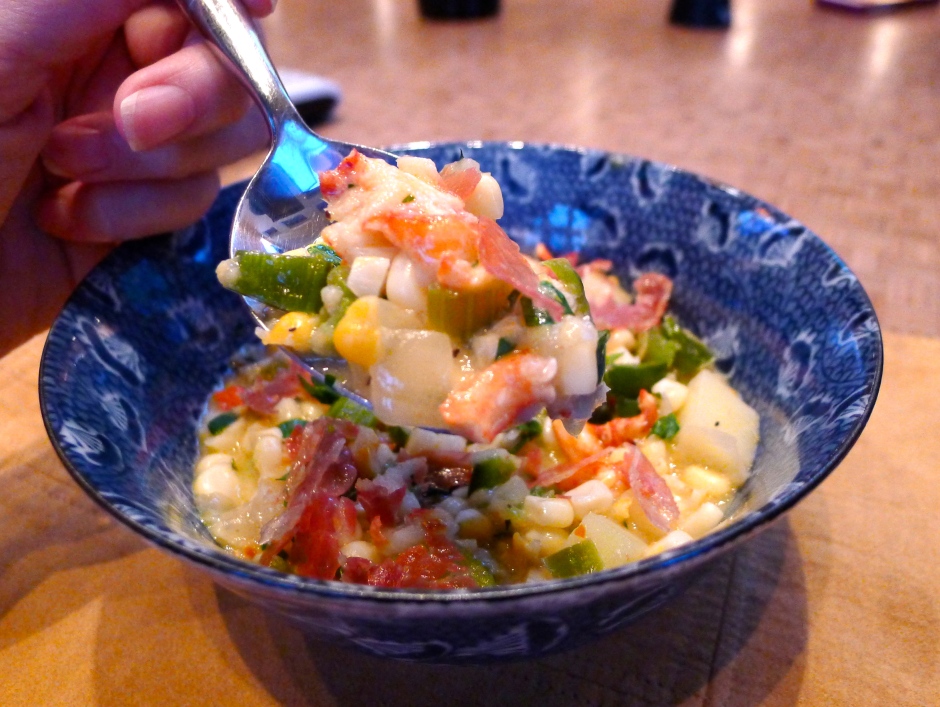 And it didn’t feel like we were eating a heavy cream-based chowder at all. It felt like summer– fresh, light, warm, and delicious.

Have a safe and fun Fourth of July weekend!

Heat one spoonful of bacon grease and a couple of swirls of olive oil in a Dutch oven. Add the onion and season well with salt and black pepper. Sauté the onion until it starts to turn translucent. Add the poblano, jalapeno, celery, garlic. After a few minutes, add the potato and give them potatoes time to get tender. Add the fresh and canned corn. Add the chicken stock, wine, and half-and-half. Add the thyme, cayenne pepper, crushed red pepper, and the bay leaf. Give the chowder a good stir and allow it to simmer for a half an hour.

Add the lobster and half of the parsley and simmer for an additional ten minutes. When serving, top the chowder with more fresh parsley and crumbled prosciutto, with crusty bread on the side. Cheers to fresh summer eating. Yum!

Hungry for more? Check out the collection of recipes on the FOOD BLISS page!

One year ago: Burned cupcakes and unmade beds: an article on living a REAL life.