When I was young, my Christmas or birthday wish lists were all about toys. Holly Hobbie. Connect Four. She-Ra. Strawberry Shortcake. My Little Pony An Easy Bake Oven. The crazy year when I just HAD to have a Cabbage Patch Kid (every kid my age had one of those years!).

As I grew, my list evolved. I discovered the world of reading and started asking for books. Choose Your Own Adventure. Sweet Valley High. The Chronicles of Narnia. I discovered music; my first cassette tape was Barry Manilow, a gift from my grandpa (“He’s not much to look at, but I guess he sounds good.”). Then it was all about the coolest clothes. Zipper-ankle jeans. Sweatshirt dresses. Way too much turquoise. I don’t remember making lists in college, but probably wished for big bags of money in my stocking to pay rent.

These days, items on my wish list are memory-makers (sleigh ride!) or practical. Yes, I asked for some clothes, but gone are the trendy items: it’s all about active wear in the Patagonia or Athleta catalogs. My inner bookworm requested and received new material, mostly biographies. But I’m intrigued that my continual attempt at domestic goddess-ness trumps everything else at this stage in life; the majority of things I asked for were kitchen-related. A donut baking pan. Cookbooks. Pyrex measuring cups. And various cast iron items.

When John and I first started dating, a friend gave us a small cast iron skillet. We got started right away, frying eggs in it for breakfast sammies or melting cheese over fresh tomato toastettes. 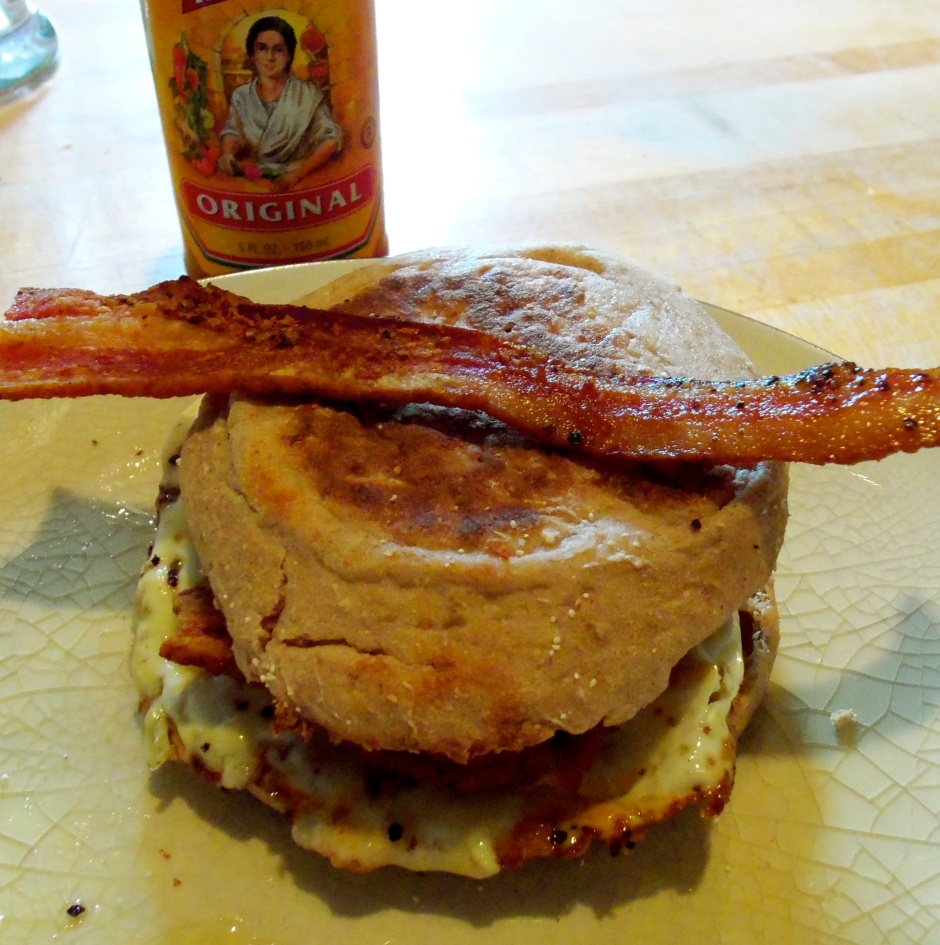 Over the years, we’ve come to love our little skillet for its even heat, perfect for quesadillas, John’s famous huevos, even a tasty frittata. We want to do more cast iron cooking, but our only pan is a little on the small side. Fuel for my Christmas list. 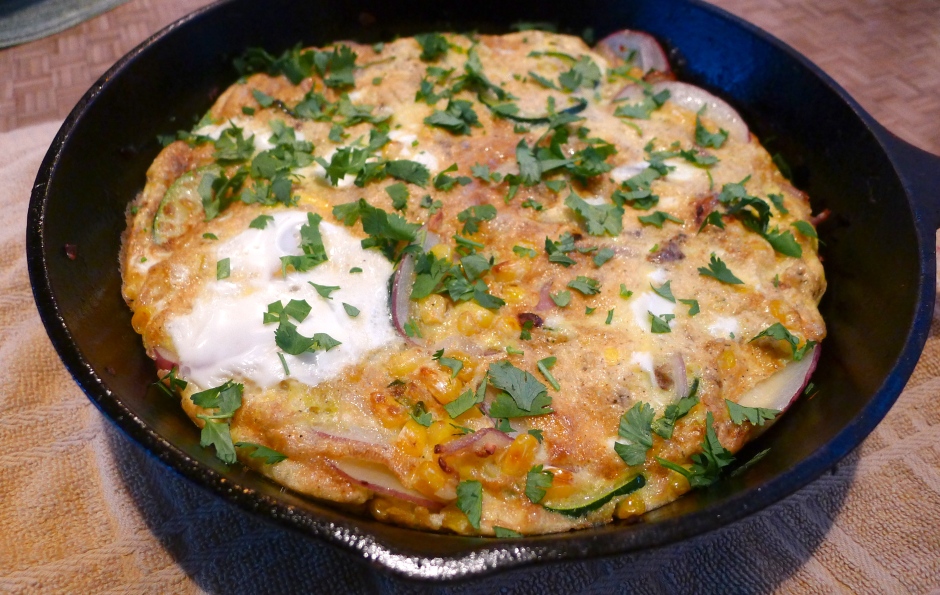 Santa delivered, with a huge skillet and a griddle! John used both when he made chicken Philly sammies. I used both skillets to make a tasty potato hash topped with- you guessed it- fried eggs. Cilantro-lime shrimp came together easily in the bigger one. I’m happy that cast iron is making its way into our meals a little more regularly.

But these biscuits totally win.

I’ve been trying to cook based on what we have on hand and wasting less food. A log of goat cheese leftover from the holidays got me searching for recipes, and I found this biscuit recipe… using a cast iron skillet! I decided to make them to accompany baked risotto (comfort food, anyone?). I shy away from making breads, so this was a new experience for me. I started by heating up my little skillet in the oven while John supervised. 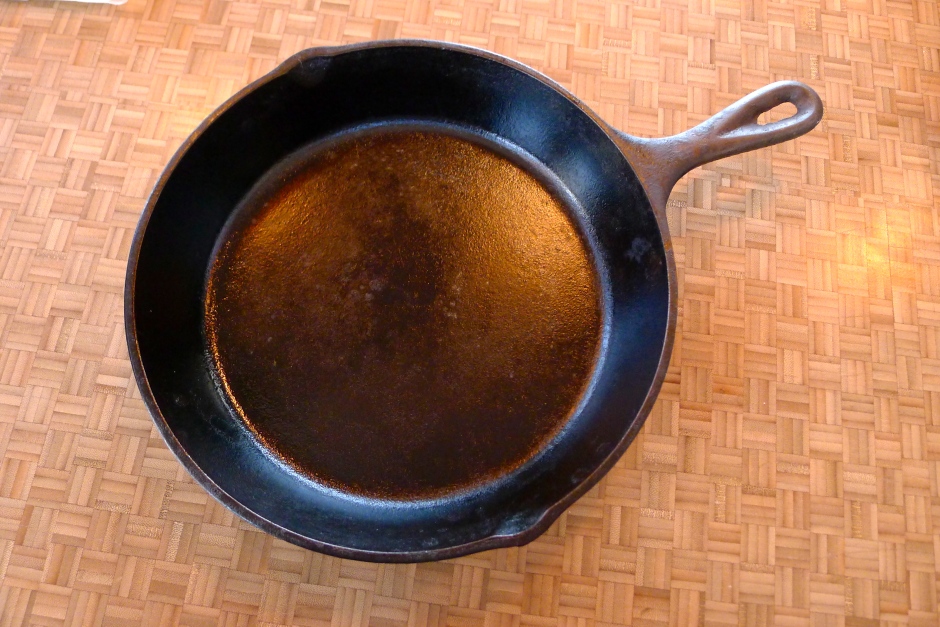 Following the recipe pretty exactly, I whisked together flour, baking powder, salt and lots of black pepper. I crumbled a huge chunk of goat cheese into the bowl, and added cut-up cubes of butter. I don’t have a pastry cutter, but I found that a wire whisk allowed me to cut the goat cheese and butter into the dry ingredients pretty well. 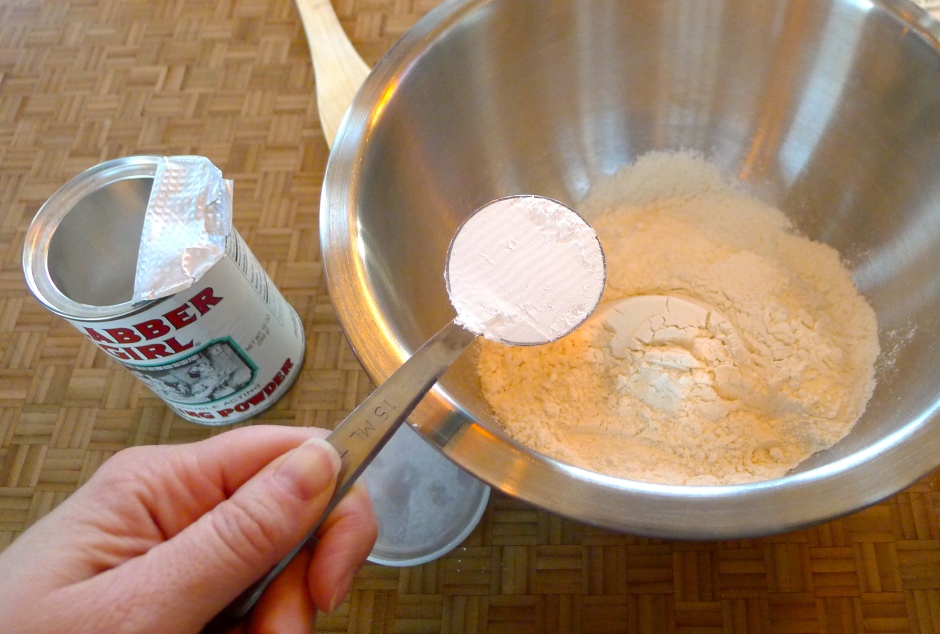 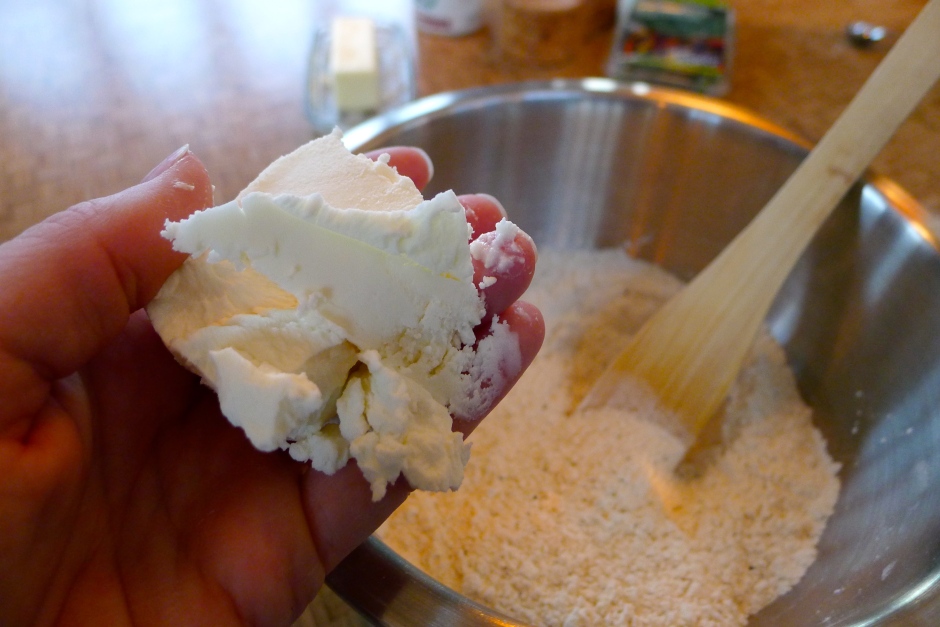 I dug a little well in the middle of the flour mixture and poured the buttermilk into it, then slowly stirred everything together. At the last minute, I decided to add plenty of fresh dill that I had in the fridge. The dough was pretty sticky, and you could see the butter and goat cheese throughout. 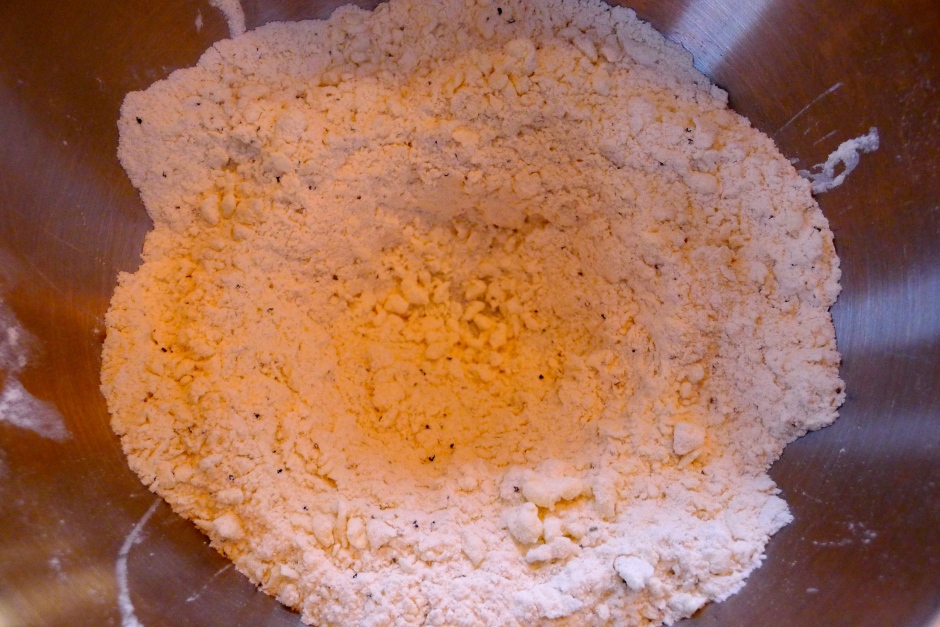 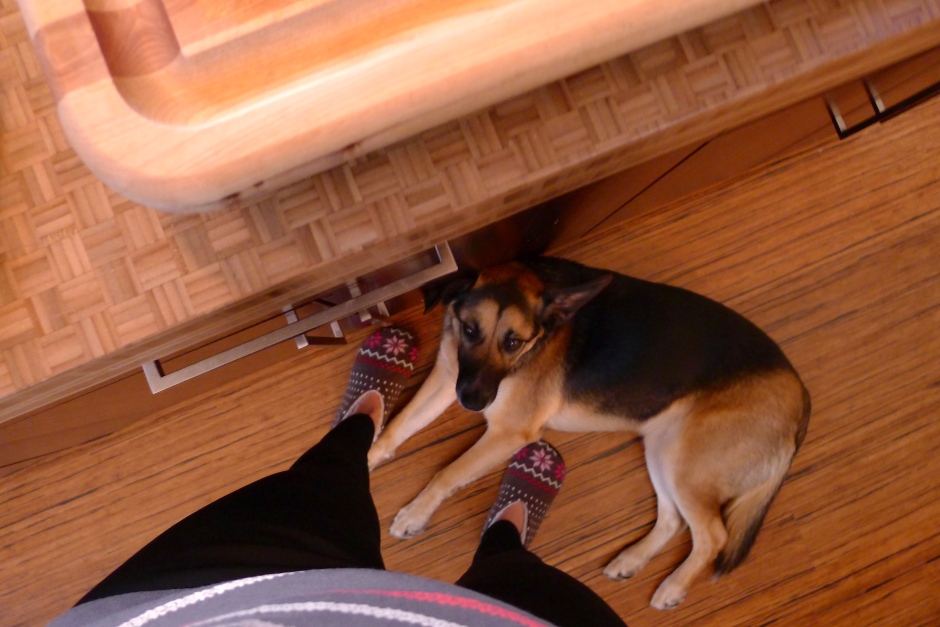 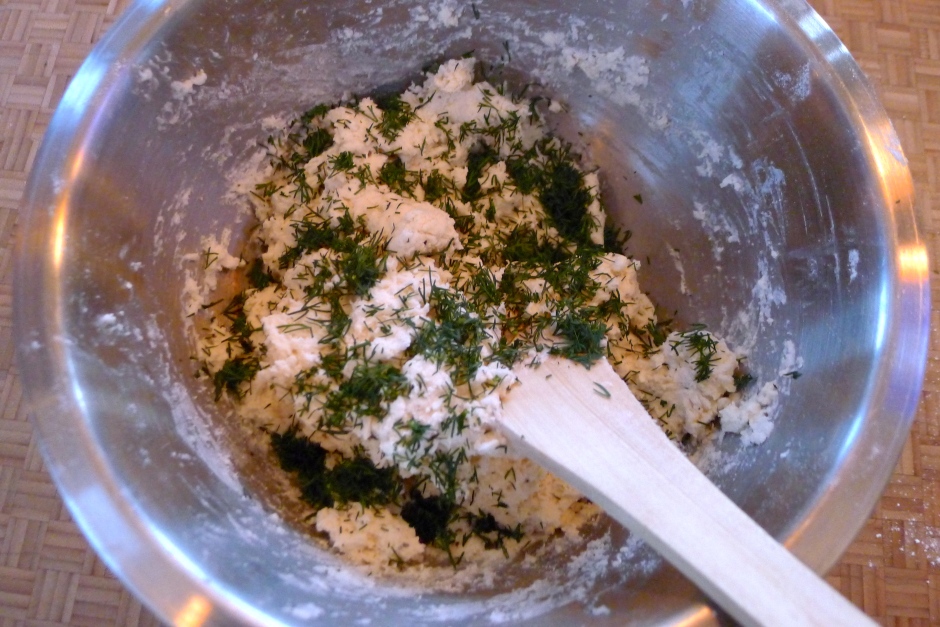 I retrieved my hot skillet and swirled some butter into it. Then I dropped big spoonfuls of dough into the skillet, brushed them with melted butter, crossed my fingers, and popped them in the oven.

The skillet biscuits baked in the oven for 15 minutes or so. The tops got nice and browned. There is NO WAY this can be bad, right? It wasn’t.

The biscuits were fluffy and moist, with black pepper and dill visible. The goat cheese flavor was more subtle than I expected. SO GOOD.

When we got down to the last two biscuits, John asked if I could make them every week.

They were so easy to make, I just might.

**The only changes I made to the recipe were to increase the amount of black pepper a tad and add chopped fresh dill.

Preheat oven to 425 and place a 10 inch cast iron skillet in the oven to heat.

Make a well in the dry ingredients and add the buttermilk. Stir until combined. (I added the dill here.)

Remove the skillet from the oven and swirl 1 tablespoon of butter around the bottom. Drop biscuits by large spoonfuls into the skillet. Melt the last of the butter and brush it over the top of the biscuits.

Bake 15 minutes, or until the biscuits are nice and browned on top. Eat with EVERYTHING. Yum!

Hungry for more? Check out the FOOD BLISS link above!

One year ago: A recap of an icy trip to Durango and the worst motel ever.