John and I make a great team.

Since we’ve combined our two lives into one, we’ve settled into some pretty delineated habits around the house. He takes care of the recycling, the garage, the yard, the dog’s mess (that’s a big one!)- and I haven’t taken the trash out for over a YEAR. I am more than happy to “man” the laundry room, fill the fridge and cupboards, and – as my readers well know – I love making yummies in the kitchen to feed us both. Our system has worked well so far…when we’re both HERE. Before I left for a week away, I made sure the cupboards were full and the fridge was stocked with plenty of options. I made a large batch of delish carnitas (I’ll share the recipe soon!), enough for leftovers. When I returned from my trip, I asked what John had eaten all week. His answer? Carnitas and Chex. The cereal. For a week.

I’m not sure how my sweet hubby survived 38 years of being a bachelor.

To be fair, when I walked in, the kitchen was spotless for me. But clearly the man was in serious need of a fresh, home-cooked meal! One of my airplane reads was a recent Cooking Light magazine. Beach sand fell into my lap as I flipped through the dog-eared pages and settled on the Spring Vegetable Penne with Lemon-Cream Sauce. Look at these tasty ingredients. YUM! 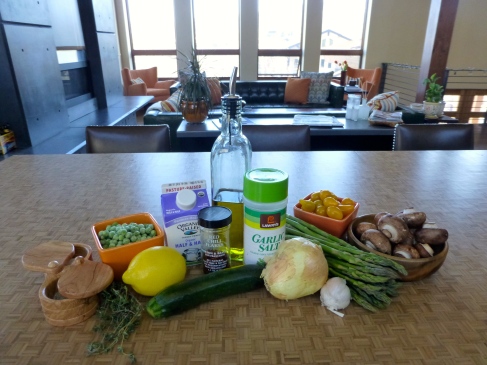 The recipe was in the magazine’s “Super Fast” section, which apparently also means “Super Easy.” The hardest part was the prep! I poured a glass of wine and got to choppin’– mushrooms, zucchini, garlic. 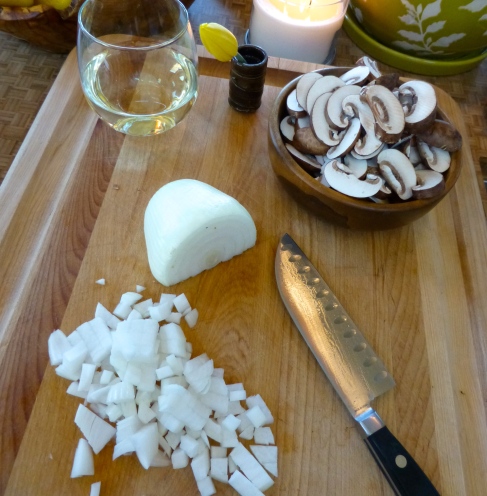 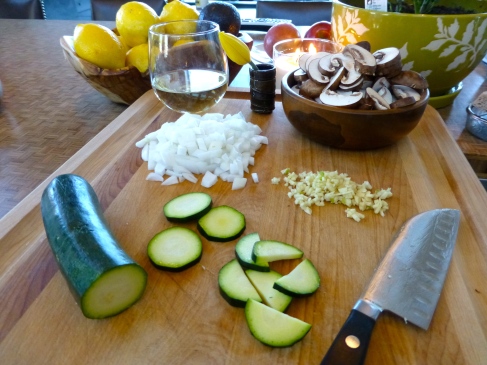 I also sliced some spring-y asparagus into one-inch pieces, halved some yellow cherry tomatoes, and zested a lemon. Cholula, realizing she doesn’t like asparagus after all, took to chewing on a tennis ball instead.

The sauce for the pasta is simply chicken broth and half-and-half, thickened with a little bit of flour and seasoned. While the pasta water came to a boil, I finished prepping the goods with some fresh chopped thyme, frozen peas, and a big pile of shredded Parmesan cheese. 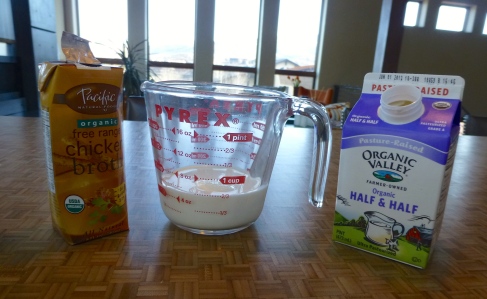 We were ready to start cookin’– but the sunshine was begging for a little time outside first. We have a new double chaise lounge thing in the backyard that converts into a couch, too. The weather has JUST been nice enough to set it up and bring out some colorful pillows! John tossed the tennis ball up and down the back hill while I soaked in the new-to-me view. It was a little preview of summertime happy hours. Look how green the hillside is already! 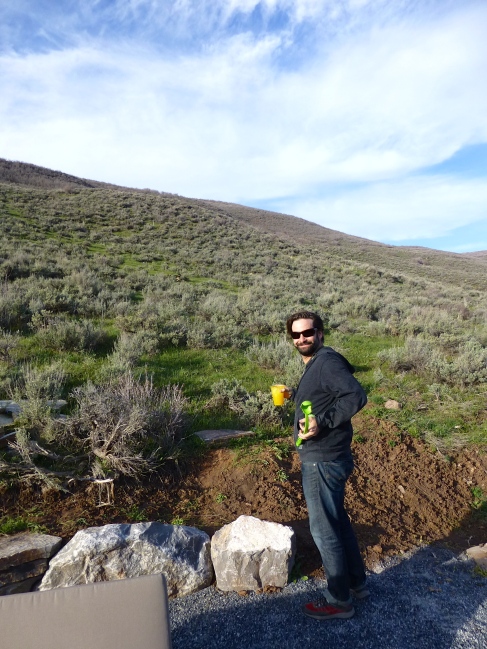 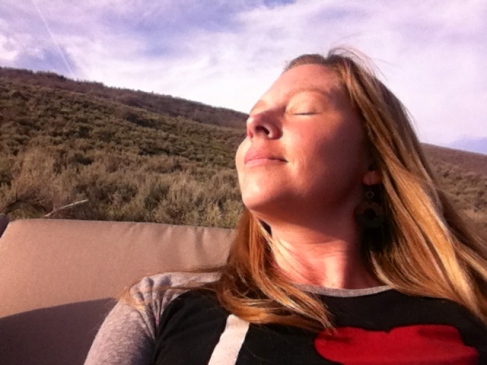 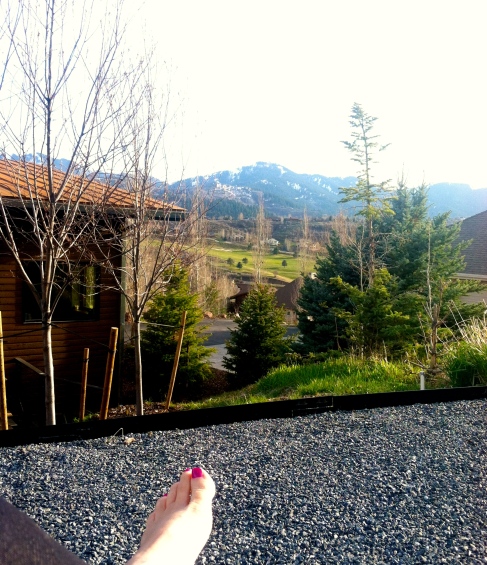 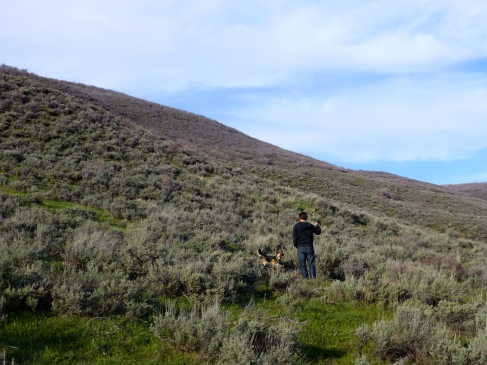 I was getting hungry, so I headed back inside. The pasta was boiling away, and I heated up some oil in a skillet. First, I sautéed the onion and mushrooms. I added the zucchini after a minute or two and made sure to season the veggies. I used my stand-by, garlic salt, along with black pepper and a few shakes of crushed red pepper. 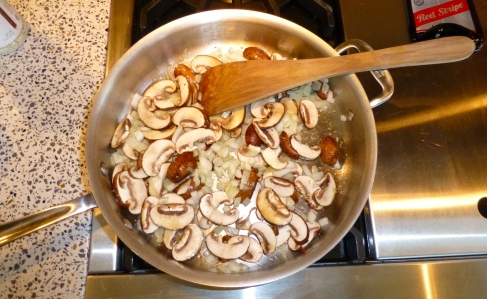 Next, in went the garlic and thyme. After another minute, I sprinkled in a palm-full of flour. I stirred the mixture constantly and let the flour flavor cook off before pouring in the chicken broth/cream mixture.

Once the sauce had thickened up a tad, in went the frozen peas and a handful of the parmesan cheese. Next came the lemon zest, and then I squeezed in the juice of half a lemon. With each addition, I let the sauce slightly simmer while I stirred. 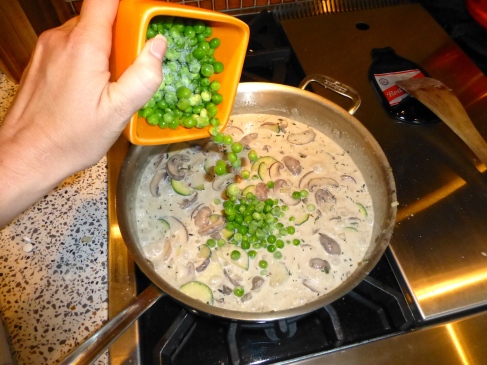 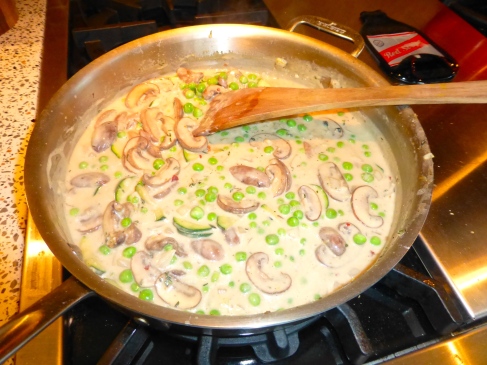 When the pasta was about 3 minutes from being done, I added the asparagus to the water to lightly cook it. I drained the pasta and asparagus and put it right back into the pot it came from. 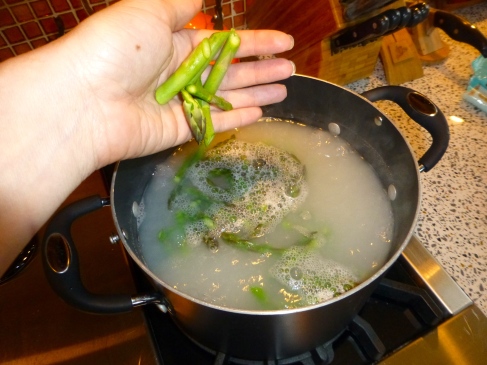 The sauce was ready, so I poured the whole thing into the pasta pot and stirred it all together into a creamy, veggie-filled mess. The last additions were the tomatoes and another handful of Parmesan cheese, and it was chow time! 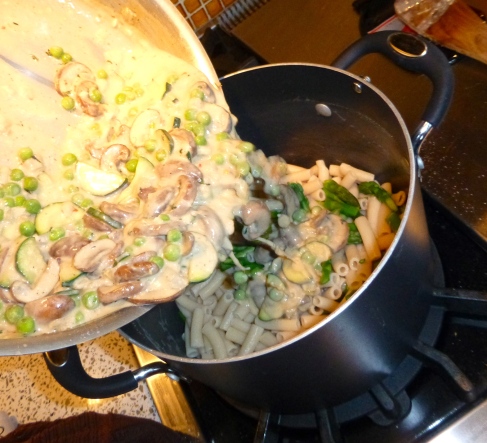 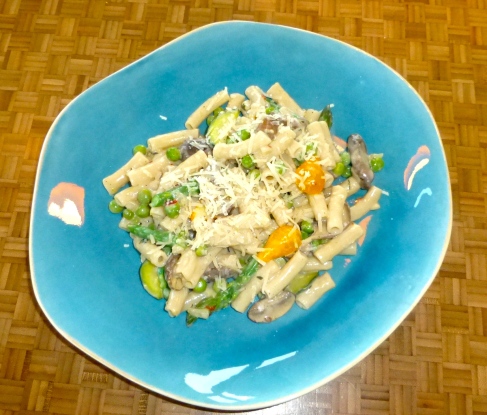 Because of how quickly it all came together, the veggies still had a bite to them– a crunch. The cream sauce was light, with a freshness from the lemon. I have to admit that the brown rice pasta (Project Reduce Gluten-approved!) is totally yummy, too. John said, “This is a keeper.” And then he cleaned his plate. The poor, starving un-bachelor. 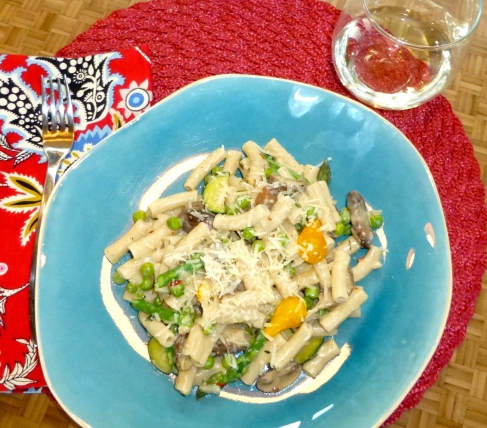 Yesterday, it was John who boarded a plane for California, just for the weekend. Guess who’s all alone eating leftovers now? It’s too quiet in the house, and even though she’s a sweet snuzzler, Cholula’s kisses aren’t the same as John’s.

I already miss him terribly.

(Plus, the trash is almost full.)

Heat oil in a large skillet over medium-high heat. Add onion and mushrooms; sauté for 3 minutes. Add zucchini and sauté for another 2 minutes. Add garlic and thyme; sauté for another minute. Sprinkle mixture with the flour and cook for less than a minute, stirring constantly. Stir in the broth and half-and-half and let thicken and bubble for a few minutes. Add the peas, half of the cheese, lemon zest, lemon juice, and seasonings to taste.

Cook pasta according to the package directions. In the last 3 minutes, add the asparagus to the pot. Drain and return pasta and asparagus to the pot. Pour the veggie sauce mixture into the pasta pot and stir well. Add the tomatoes and the rest of the cheese. Try not to eat the whole pot of pasta, unless you’re surviving on leftovers. YUM!

**Check out the FOOD BLISS link above for more of my culinary adventures!**