I mentioned the other day that there’s nothing like your own bed after some time away from home. Another thing I missed?

Part of what I love about travel is new and different food- whether it’s getting creative with camping meals, tasting an exotic cuisine for the first time, or just having a different set of restaurants to choose from than you’re used to. We ate WELL on our trip! But for someone who loves to cook, part of really feeling HOME is getting back into the kitchen.

I cook using recipes. I always do something to tweak it- it makes the final product more my own, more our taste. I do have a few old-timer recipes that I can whip up from scratch without notes, but generally, I’ve got a cookbook out on the counter to refer to. But the other night, time got away from me and I found myself lacking the motivation to A) find a recipe to make for dinner or B) go to the store for any specific ingredients to make said recipe. I’d already gone to the store to stock up on basics- surely I could wing it and make something delish.

I present to you: Spicy/Sweet Grilled Shrimp Tostadas with Pineapple Salsa.

I’ve been on a shrimp kick lately. I’ve learned to ask the fish counter guy for the shrimp that have already been peeled and deveined. When I brainstormed a good marinade, I wanted something fresh and bold- and we love the spicy/sweet combination. So I started grabbing ingredients. 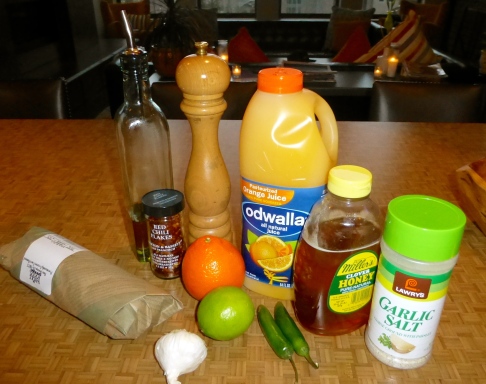 Into a baking dish, I gave a few swirls of olive oil and a generous squeeze of honey- equal amounts, so the honey wouldn’t burn on the grill. I finely chopped up some garlic and a whole Serrano, seeds and all (we like it HOT around here!), and tossed both into the dish. I squeezed a lime and poured in a little orange juice into the marinade for a citrus POP, then sprinkled in some crushed red pepper and garlic salt. In went the shrimp, and I made sure there was enough marinade to almost cover them. I gave them a stir every once in awhile and got to work on the pineapple salsa. 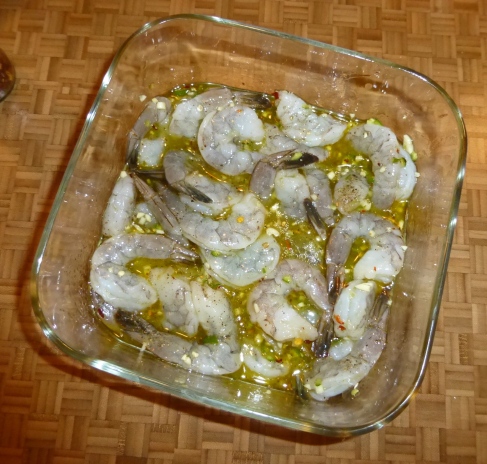 I love homemade salsa. It’s so easy, and it tastes so much fresher than anything from the store. Tomatoes, red onion, cilantro, jalapeno, garlic salt, lime. That’s it! The only change I made from my usual pico de gallo recipe was to add chunks of pineapple.  The best bites have a little bit of everything. Spicy/sweet! 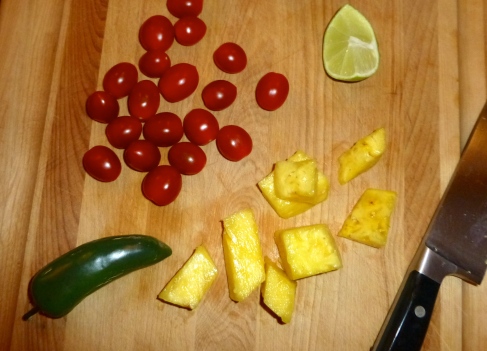 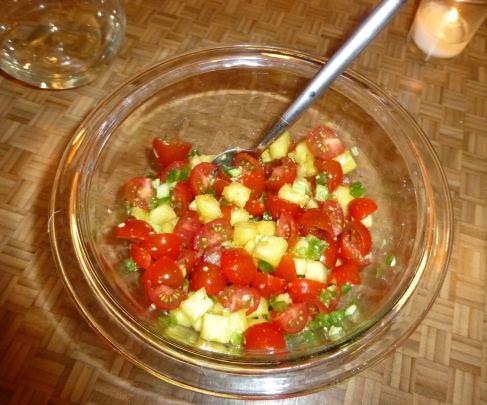 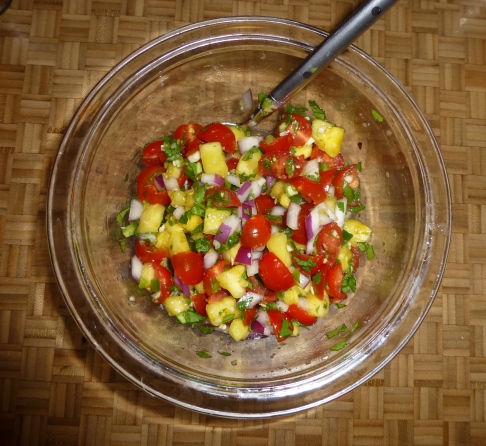 The next phase of dinner was kind of… random. I’d grabbed some tostada shells (hard corn tortillas) on a whim, since corn tortillas are Project Reduce Gluten-approved. So, I dressed up a can of black beans with a bit of chicken stock, red onion, jalapeno, and cilantro. I smeared some tostadas with the black beans, and sprinkled some cheese on top. I figured I’d pop them in the toaster oven just before dinner to warm everything up and melt the cheese. 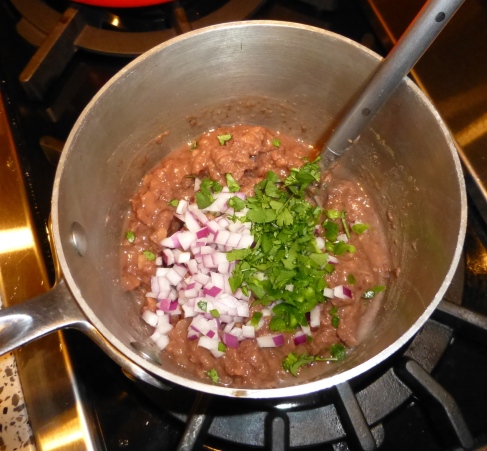 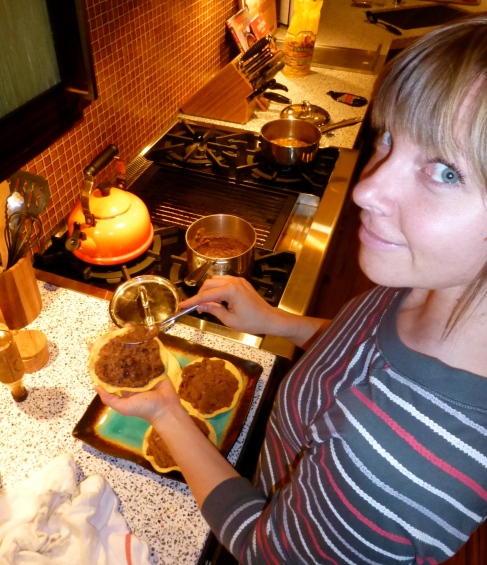 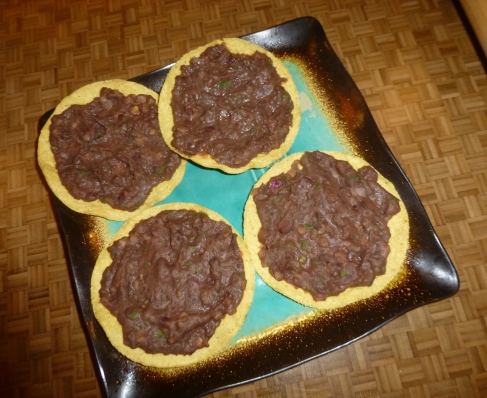 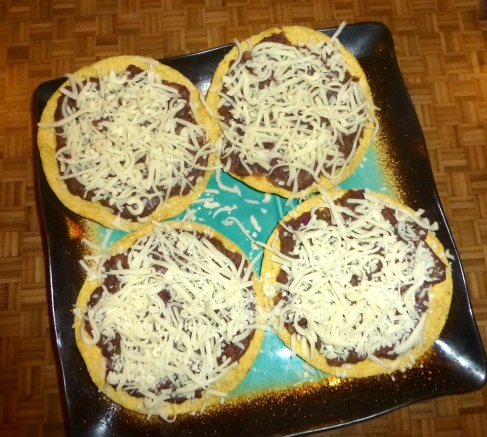 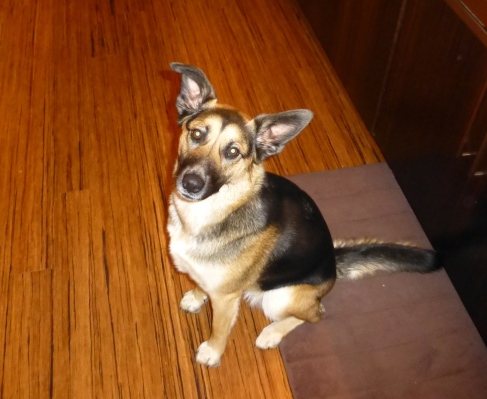 Cholula wasn’t sure this recipe-less meal was going to come together. (Truth? Neither was I.)

The shrimp had been swimming in their spicy/sweet marinade for at least a half-hour, so I skewered them up and let the Grill Master (aka John) work his magic. I saved the marinade and simmered it on the stove in the hopes that it would reduce and be a yummy dipping sauce of some kind. 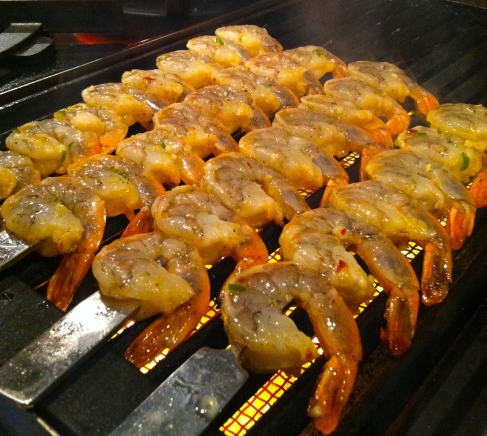 How GOOD do those shrimp look?! 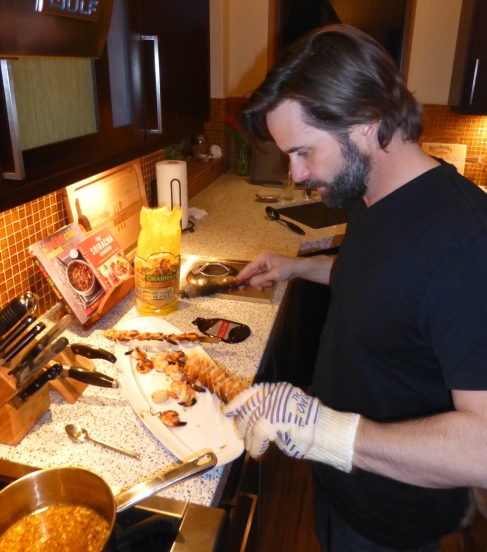 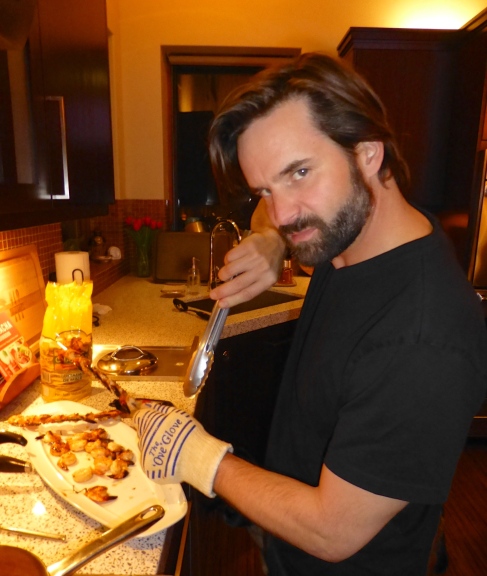 This is what John did when I said, “Look tough.” He’s spicy/sweet.

The marinade didn’t really thicken up for me, so I asked John to just pour it over the perfectly-charred shrimpies. Game time, folks.

Instead of serving the shrimp and salsa ON the cheesy-bean tostada, I left them separate- mostly because I wasn’t sure how to eat a tostada with whole shrimp on it. A sprinkle of cilantro here, a lime wedge there. The plate was lovely-bright, vibrant colors– and the shrimp smelled incredible!

I removed the tails from my shrimp and constructed my first tostada. What ended up happening was that it broke in the middle and became a delectable black bean and shrimp taco thing- which was awesome! Pouring the simmered marinade over the shrimp was the right move- the little chunks of garlic and Serrano made each bite even better. The sweetness from the pineapple and the honey was cut by the spice of the Serrano and jalapeno. A squeeze of lime brought it all together. 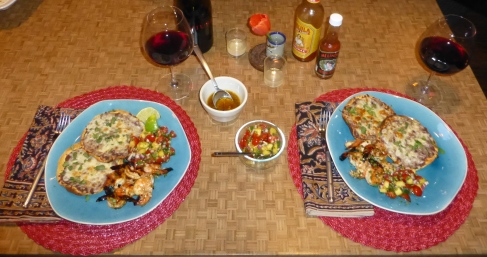 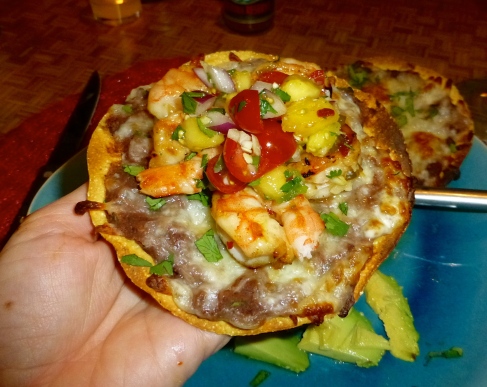 I guess Cholula was wrong. I can cook without a recipe, after all. This one’s a keeper!

I forgive her. She’s kind of spicy/sweet, too. 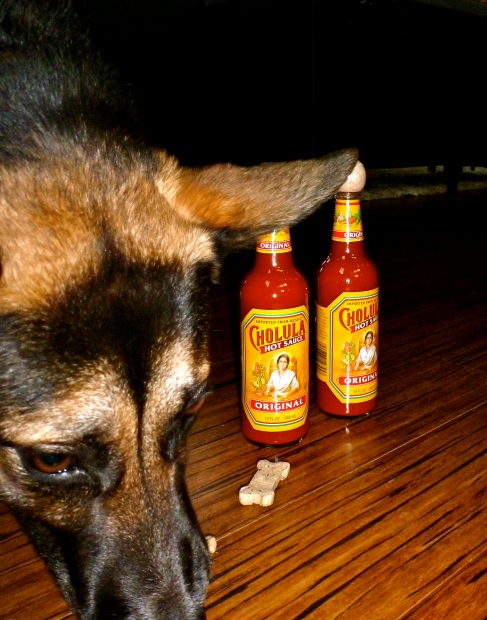 Combine all ingredients in a bowl. Add 1 pound of peeled/deveined shrimp and let marinate for at least 30 minutes before grilling, stirring occasionally.

Optional: Simmer reserved marinade for at least 5 minutes and pour over grilled shrimp before serving. YUM!

Combine all ingredients. Set in the refrigerator until ready to serve, stirring occasionally. YUM!

**Check out more of my culinary adventures on the FOOD BLISS link above!**