The last few days have been kind of rough on my soul.

It’s easy to get lost in one’s own head- to over-think a situation until it’s turned into something else entirely. I do that. I’ve been trying (often unsuccessfully) to stay centered and calm, and in doing so, interesting things are happening. I’m experiencing little moments of clarity. I’m becoming reacquainted with a sense of self that hasn’t been lost, but hasn’t been dusted off and displayed proudly for a while. I’m surprising myself with a strong confidence and security about my current path.

You guys, my therapist is GOOD.

With a busy mind, I’ve focused on things that soothe me- those actions that make me feel like ME. I’ve brought out the yoga mat that I haven’t used since we moved into this house. I’ve read all sorts of inspiring things. I smiled at being mentioned here and also here. I’ve explored new trails and breathed frigid fresh air, laughing with my family. I said a silent prayer or two. And, I’ve shuffled around barefoot in my happiest of happy places– the kitchen.

I’ve had this recipe for Baked Shrimp Scampi set aside for a few weeks. Something about the warmth from the oven and a mouthful of buttery garlic-ness sounded pretty perfect this week! As usual, I made a few tweaks along the way. I was surprised at how many ingredients other than butter and garlic were involved, but they’re all yummy.

See that bottle with the red label? It’s a chile-infused grapeseed oil that I tasted at Whole Foods the other day. I decided to incorporate it into the recipe for added heat. We like it hot around here.

I started with a bowl of big, beautiful shrimp, already peeled but with the tails still on. Into the bowl, I added olive oil, the chile oil, garlic salt, some white wine, some cracked black pepper, and crushed red pepper. With my hands, I made sure that all of the shrimp were coated in the little marinade and then I set the bowl aside for awhile. I had the Magic Butter Mixture to make. 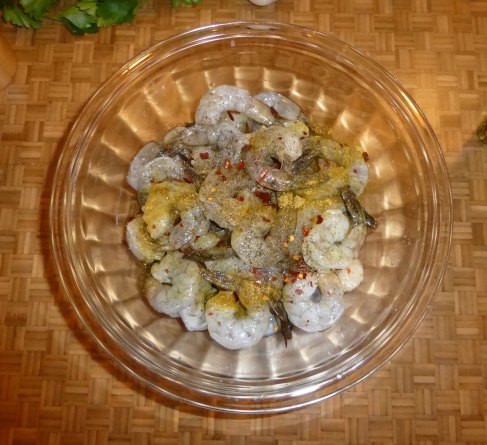 This mixture is the key to this recipe. There’s so much going on! I zested a lemon, then minced some shallot, fresh rosemary (Mom, you can totally leave it out!), Italian parsley, and- of course- lots of garlic. It’s SCAMPI, after all! 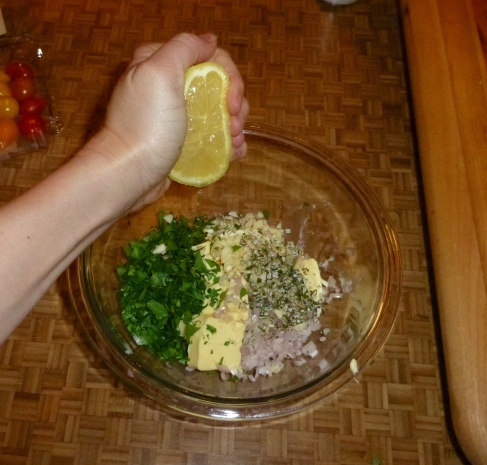 All of those goodies landed in a bowl with a stick of butter. The final touches: an egg yolk and a decent amount of breadcrumbs. Using a fork, I blended it all together into a buttery, garlic-y spread. YUM. 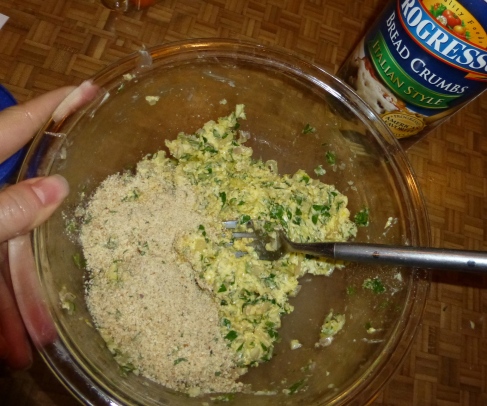 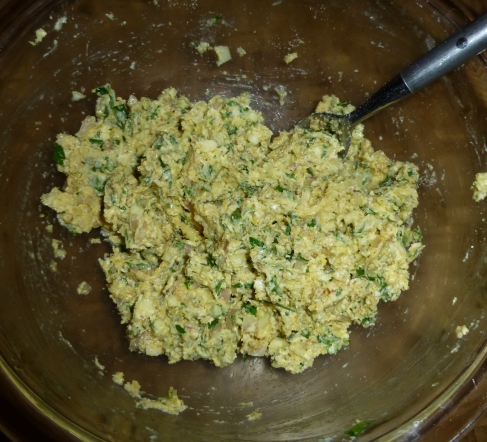 The shrimp had been swimming in their marinade for 20 minutes or so. One by one, I arranged them in a baking dish, tails up.  At the last minute, I thought some roasted tomatoes would be a yummy addition to the dish, so I halved some grape tomatoes and sprinkled them over the shrimp. Then, I poured the remaining marinade over it all- every last drop of flavor!

Now- the Magic Butter. It was a little tricky to spread over the shrimp, but I made sure that it covered the entire top. I added just a teeny bit more of the breadcrumbs for extra crunch. 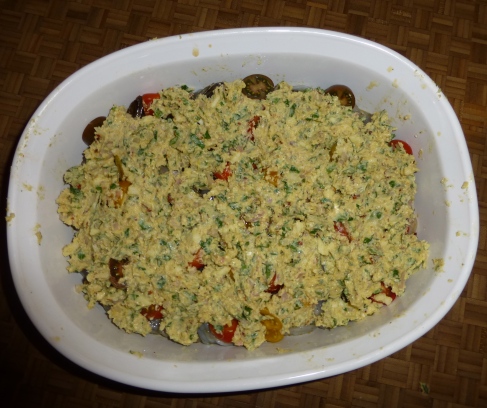 While the scampi baked away, I checked on my rock star hubby and confirmed that Cholula was still alive. I made some rice (lemon and parsley stirred into it), prepped the garnishes, and set the table with our lovely new plates.

When the scampi came out of the oven, the topping was browned and bubbling. It smelled heavenly! I spooned a little rice onto each plate, then scooped some shrimp onto it. A sprinkle of parsley, a lemon wedge- time to eat! 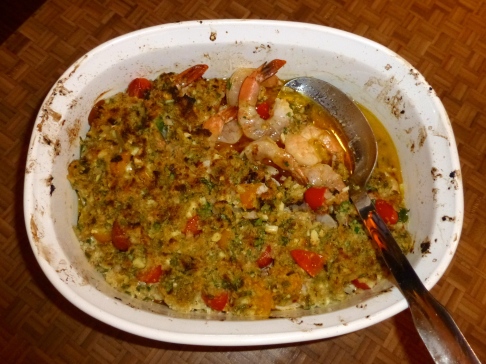 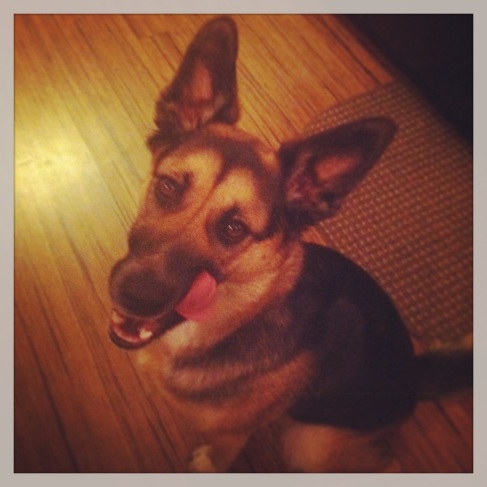 This was more than shrimp scampi. All of the extra stuff in the Magic Butter made it really flavorful, and I loved the crunchy topping from baking it. The tomatoes were a smart addition. John and I both cleared our plates. 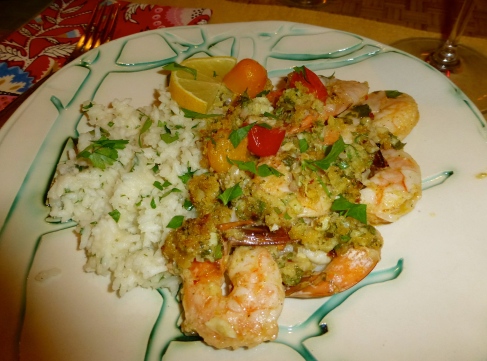 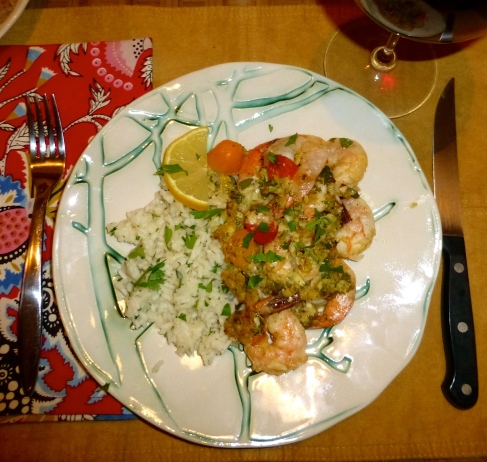 I realized after dinner that the whole process of cooking a meal- from getting my hands dirty, to arranging the shrimp in the dish, to that first satisfying bite–  had calmed my crazy brain for a little while. Doing something I love didn’t just make me happy– it was therapeutic. It’s not always easy to breathe your way through an uncomfortable situation, but if you take the time to do it, it sure does help.

So does garlic-y shrimp.

Place the shrimp in a bowl and toss with olive oil, wine, garlic salt, pepper, and a sprinkle of crushed red pepper. Set aside.

Bake for 10-12 minutes, until hot and bubbly. Switch the oven to broil and brown the top for one minute. Serve topped with fresh parsley, over rice. YUM!

**Check out the FOOD BLISS link above for all of my culinary adventures!**