And this morning is fog-town!

I love cooking in fall and winter. I like spending hours with a recipe in the kitchen- my happy place. But sometimes, you want a meal that’s simmered away all day- but don’t have that kind of time.

I’ve noticed that these miraculous kitchen contraptions are called slow-cookers more often these days, but I like CROCKPOT! I don’t use mine often enough, but I’d like to experiment with crock-y recipes this season. I think you can even make desserts with them! John has a sleeker, newer version that holds more food. But look how cute mine is. 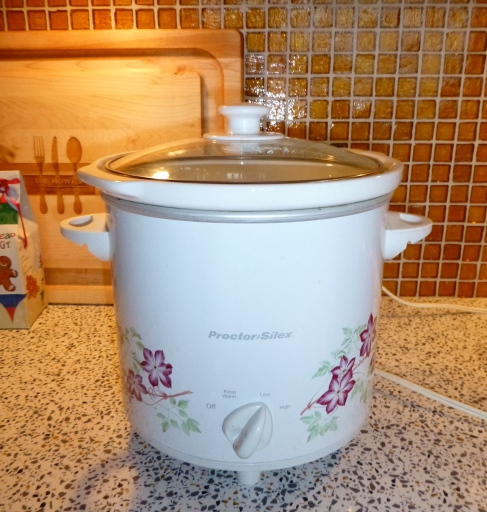 I came across a tasty-looking photo of a crockpot meal on Pinterest. (I love Pinterest for this very reason– not only did I find something to make for dinner last night, but I found a new blog to explore!) Take a look at the picture: I knew right away I wanted to try the Slow-Cooker Coconut Ginger Chicken & Vegetables.

I didn’t read the recipe all the way through, at first. I sort of assumed I’d quarter an onion or two, toss them into the crock with the chicken and some other basic ingredients, switch on the machine and go fold laundry. The first stage of the recipe was a tad more involved than I expected, but easy stuff. I was familiar with all of the ingredients. 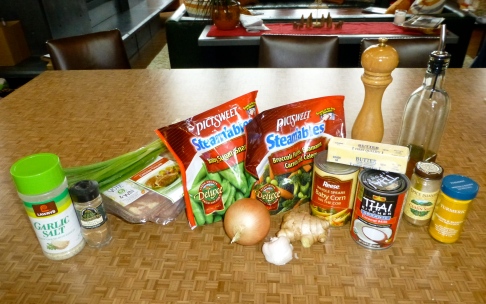 I started by combining some salt, pepper, cumin, coriander and turmeric in a little dish. Have you cooked with turmeric before? It brings a stunning golden color to the food. 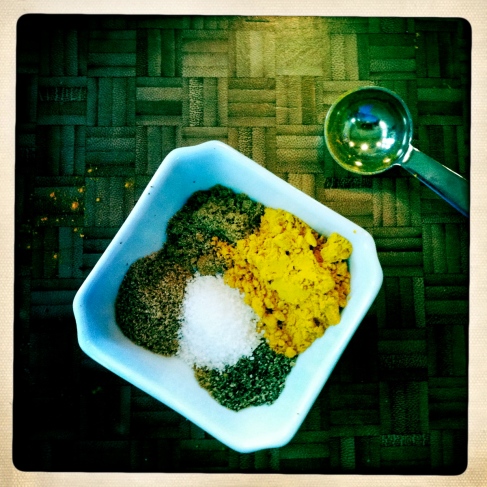 The next prep phase was to combine onion, garlic, and fresh ginger in the food processor. Very little chopping was necessary- the processor did all of the work for me!

The recipe called for me to start the cooking in the crock over a burner. I wasn’t sure if my crock could be used over a flame or not, so I used the alternate method of starting off in a pan on the stove. The puree got sautéed in butter and oil, and I’ve got to say- the combo of onion, garlic, and ginger bubbling away in butter made for a heavenly aroma in the kitchen!

I tossed in the spice mix and then the chicken. I usually cook with chicken breast meat, so thighs were new for me. I assumed they’d be more tender than breast meat. After the chicken was coated in the golden mixture and cooked on all sides, it went into the crockpot at last!

I had another moment of “should have read the recipe first” when it came to the cans of coconut milk. The recipe calls for the milk first and the cream later. I removed the cream and started to throw it away- luckily, I caught myself before it was all trashed!

Once the coconut milk was in the crock, I added baby corn on the cob (adorable!). At the last minute, I remembered that Aimee noted that the recipe as written was mild, for her kids. I added some crushed red pepper flakes to bring a little heat.

And then? I walked away and let my cute little crockpot do its job for 4 hours. Look at it, cooking my dinner there on the counter!

I took a peek a couple of hours in. The chicken had released some juices and seemed to be getting tender. After 4 hours on low, I whisked the cream from the coconut milk with some cornstarch and added it to the crock, along with some mixed frozen veggies (I chose carrot, celery, snap peas, and edemame- yum!). A good stir and 30 more minutes in the crock, and it was time for a taste. 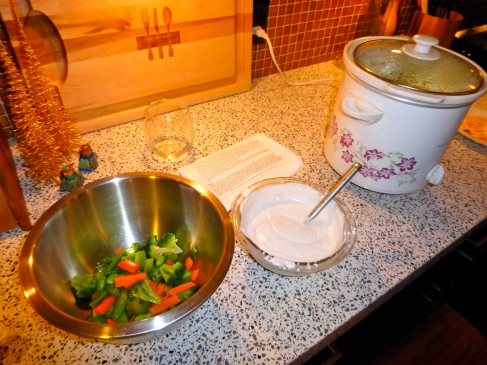 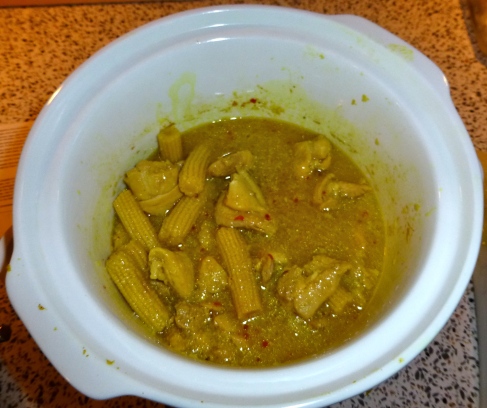 The ginger flavor was subtle but significant, and the sauce had a wonderful creamy texture. I found it to be a tad too mild for our tastes, heat AND spice wise. So I tossed in more crushed red pepper, some Sriracha sauce, and garlic salt.

I served the chicken and veggies over basmati rice. The chicken fell apart easily, tender and delish. I might add more veggies next time, just because I like a lot. It was an ideal meal for a chilly night- and my sturdy little crockpot did most of the work!

After dinner, John finished up our Rainbow Brite tree out front. It’s my favorite. 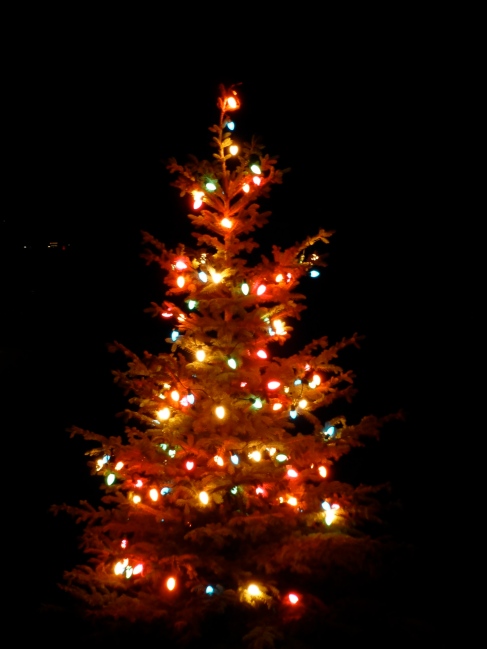 And me? I headed for The Wok.

Because the kitchen isn’t my ONLY favorite spot on a chilly day.

Thanks to Aimee at Simple Bites for the recipe!

What are your favorite ways to use a slow-cooker? Share your recipes with me!