Maybe it was because it was a holiday weekend. Maybe it was because firing up the grill felt like the right thing to do on Memorial Day. Maybe I just forgot until John pointed out that turkey burgers are, in fact, meat. In any case, it looks like this week we’ll have Meatless Tuesday. That still works, right?

At least there were some veggies on the plate with the potatoes and arugula salad. And the cookies included no meat whatsoever.

Another item on my Life List needs to be tweaked. #68- Take a solo trip to Bozeman to visit a friend. I have to admit, when I included that item on the list, it was kind of a freebie. I already had been plotting a trip to see Nancy once the weather got warm. But since our friends are unexpectedly moving to California, time is short! I’m removing the ‘solo’ part of that item, since John and Cholula are part of this week’s Montana adventure. Slight alterations to my goals are ok, I think. It’s important to be flexible in life!

I did manage to stick with my goal of one new recipe each week. I have a pile of recipes I’m looking forward to trying. (Note to self: Set aside time to organize recipe books.)

This time, I ventured into the land of soba noodles. I love trying a new recipe, but I’m also challenging myself to use ingredients unfamiliar to me (remember this?). One of John’s specialties in the kitchen is a spicy soba noodle dish with tofu. It’s scrumptious, so I knew I’d like the taste, but hadn’t used these buckwheat noodles myself.

A recipe for Sesame-Ginger Pork with Soba Noodles had caught my eye, along with another that claimed to be ‘spicy’ (and therefore appetizing in this household). I took pieces of both recipes, added things like garlic, crushed red pepper, and more veggies, and made something yummy.

There were a couple of things that I found interesting with this recipe. First, it called for pickled ginger- you know, the kind that’s served with your wasabi on a plate of sushi. It was delicious. Second, after cooking the soba noodles (just like pasta), I put them in a Ziploc bag with sesame oil for a little while. The result was an extra nutty flavor that added to the Asian flavor of the dish. I think the technique would work with other condiments and noodles- I’ll have to try it.

After cooking the veggies and pork with various spices, I added chicken broth and soy sauce and let it simmer. That tasty mixture was combined with the sesame soba noodles, water chestnuts, and fresh cucumber. I topped it with toasted sesame seeds and fresh cilantro. 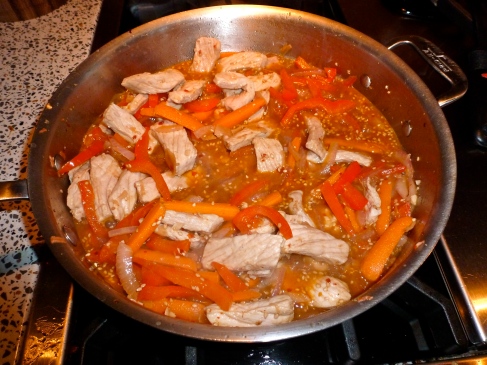 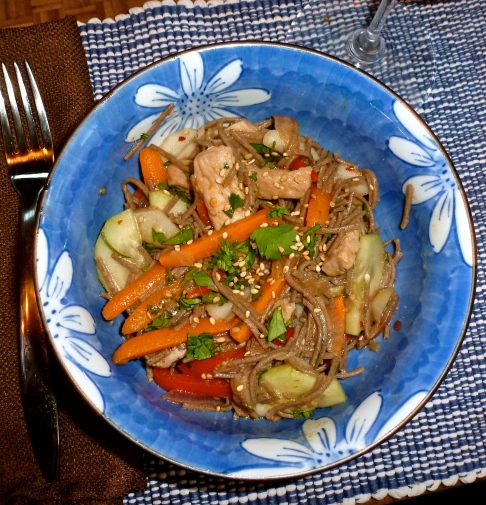 I love the rainbow of colors in my bowl, and the fresh cucumber and water chestnuts gave it a satisfying crunch. The noodles didn’t remain long- they got kind of broken up into mini-noodles. I’m not sure if it’s because they were broken down a bit in the sesame oil or what, but it didn’t change the flavor.

I made notes on the recipe and put it in the pile of “Keepers.” Another new recipe success! How do I know? My official “new recipe taste-tester” (aka John) made happy Mmmmm noises and didn’t talk a lot while he ate it. I know he really liked it.

And that’s my favorite part about cooking, anyway.