We’ve had something of an Indian summer in Park City recently. Visually, it’s definitely fall– gold and orange and brick red hillsides are nearly past their vibrant prime. But the warmth of the late September sunshine on my skin definitely feels like summer isn’t ready to leave the party! That combination makes for some pretty spectacular hiking, and I’ve explored a couple of new trails in the last week or two.

Last weekend, John showed me a trailhead in the neighborhood next to ours. We took a short family hike through red oak and maple and I was struck by the view. John pointed out where different parts of the trail led, some down into a valley (which was actually Toll Canyon, another favorite hike) and some up and past a water tower to the popular Mid-Mountain Trail. Though I’d hiked in the Pinebrook neighborhood often, this perspective was new to me- and it was lovely! 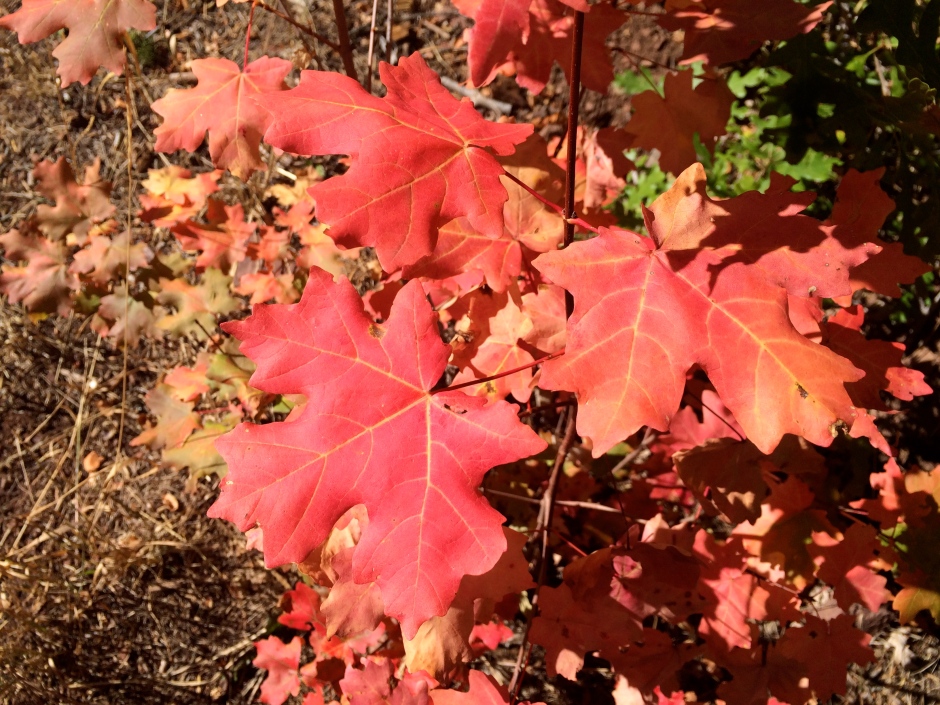 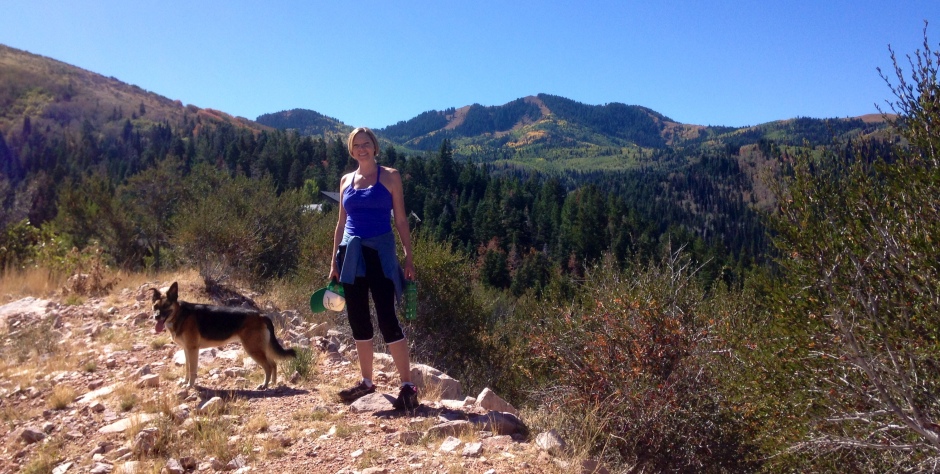 A couple of days later, Cholula and I returned to the water tower trail and set off to explore. The sun was hot but most of the trail was protected and shady. My goal was to reach the Mid-Mountain Trail, which I believed was just a few switchbacks up the hill, and check out the view of the other side. We hiked and hiked, curving upward and over and down and around, assuming we’d reach the point where the trails crossed any minute. 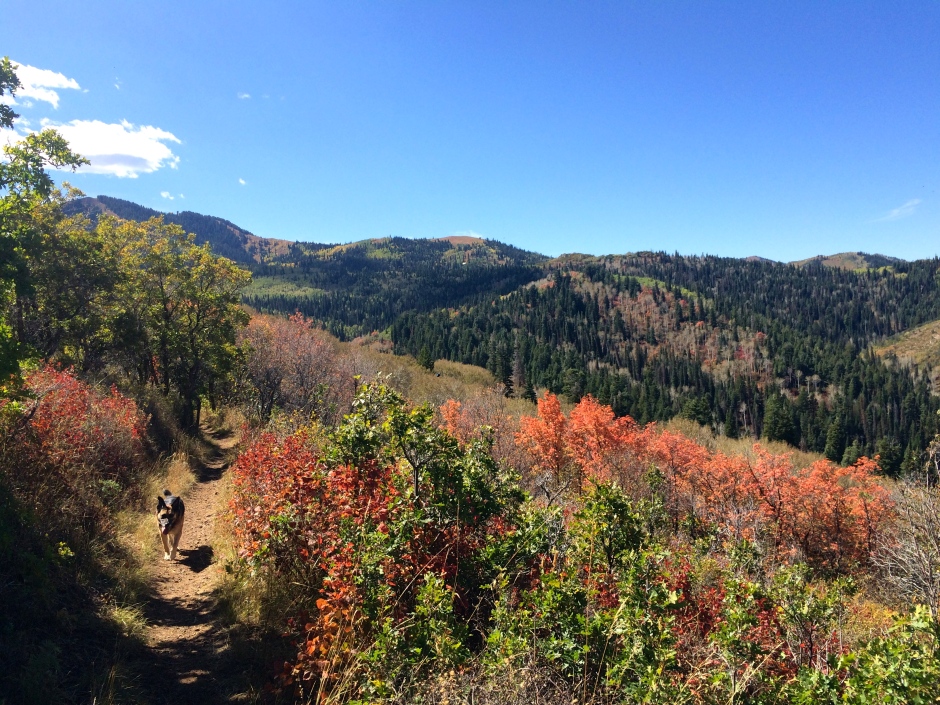 It turns out that I was ON the Mid-Mountain Trail for most of the hike without realizing it, and my “quick jaunt” in the hills turned into a decent five mile trek. And the views I was hoping for? Dazzling! 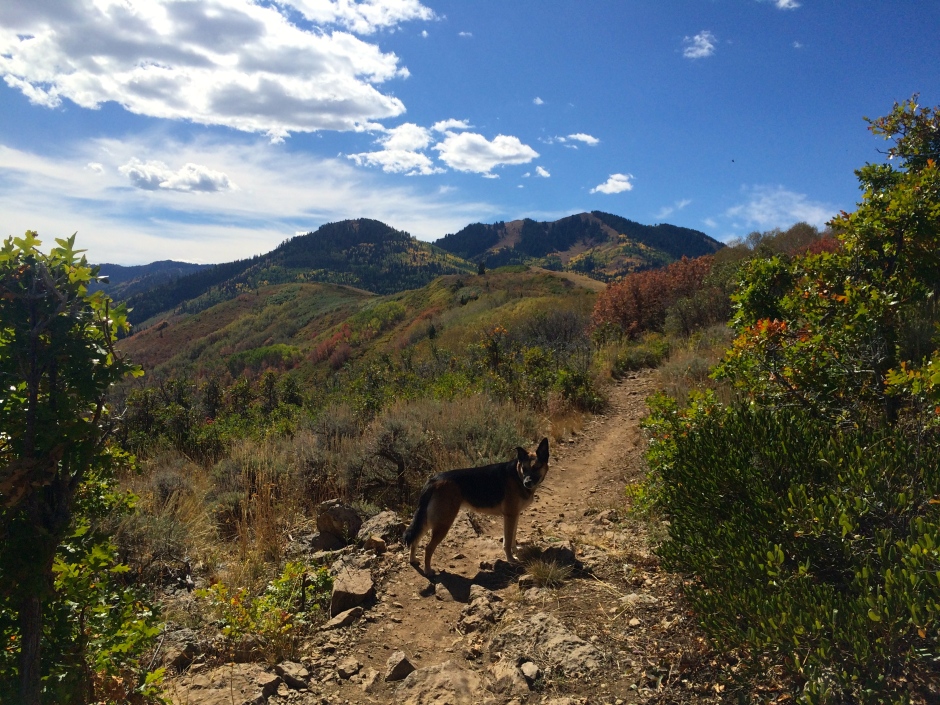 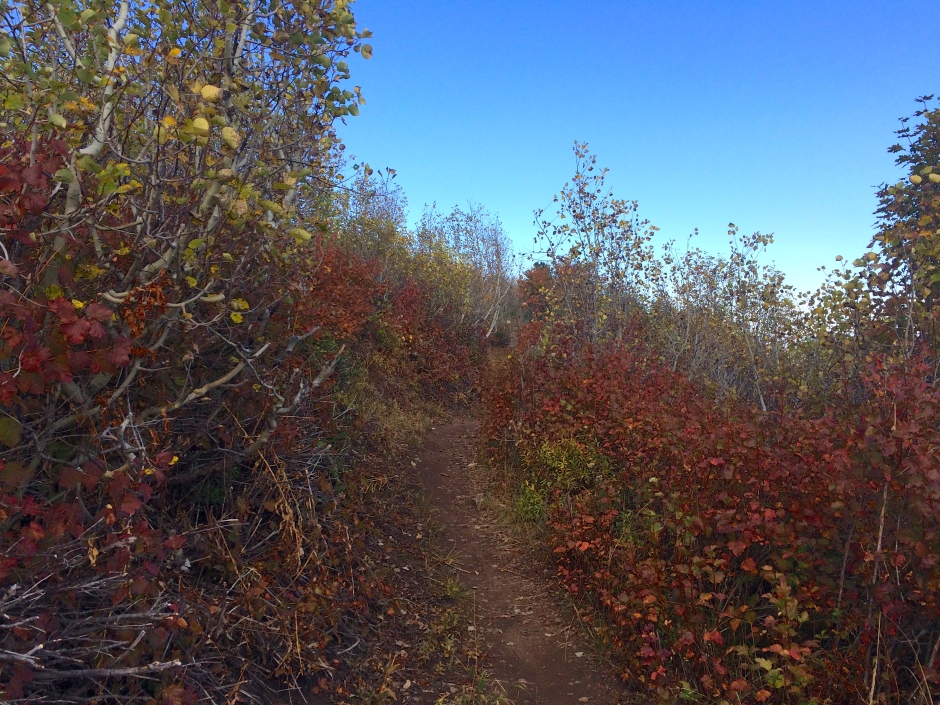 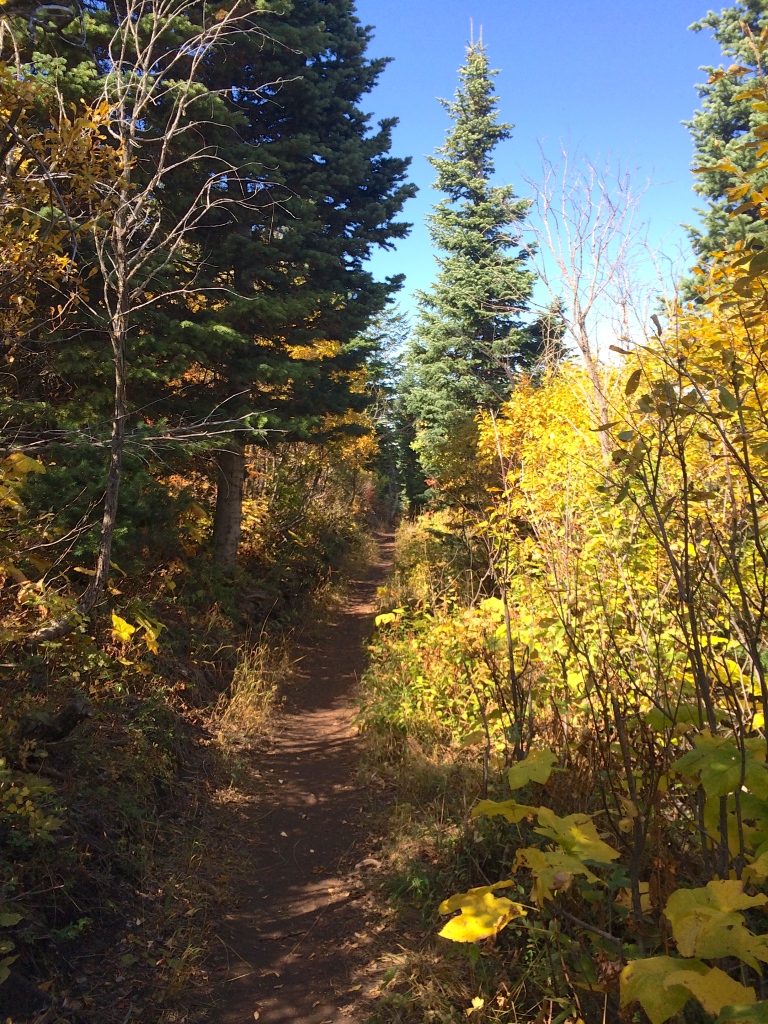 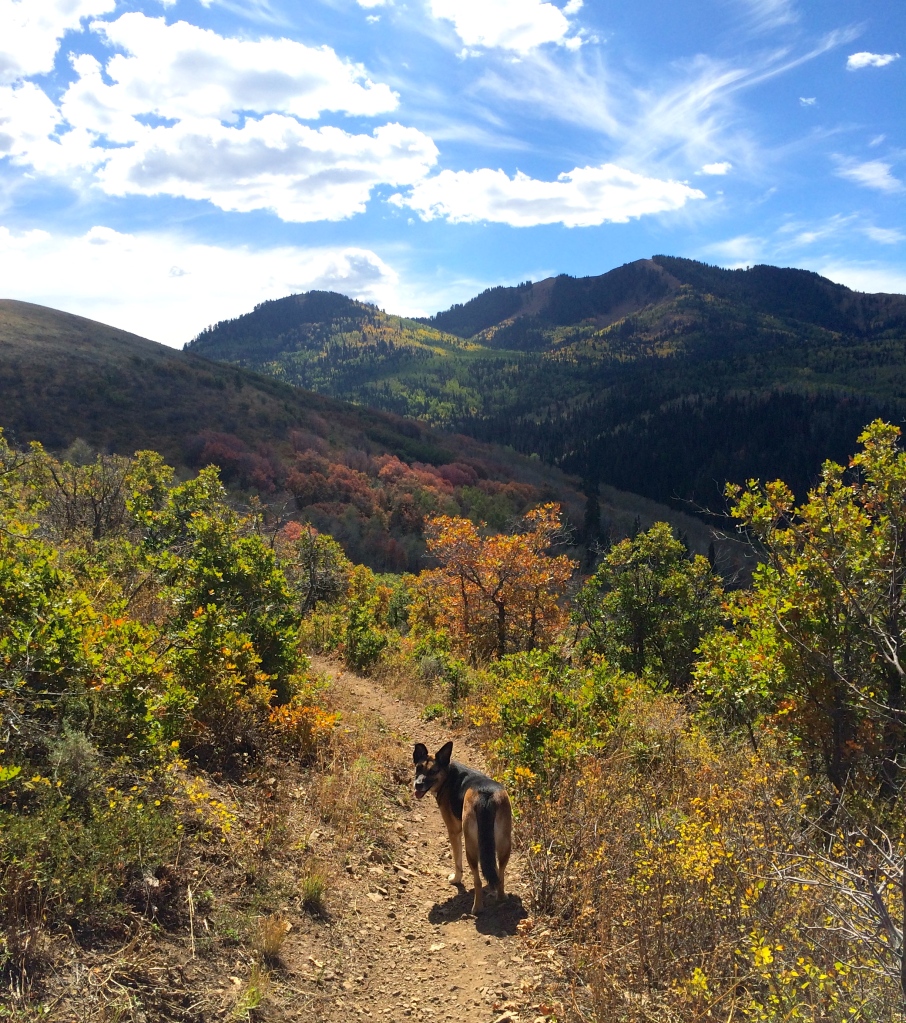 This past Sunday, on our way to join some friends at a nearby reservoir, John and I drove up to Empire Pass to see the colors. Last year’s leaf-peeping excursion was incredible- the wet summer had left us with one of the most colorful autumns in recent memory. We had a lot less rain this year, so there was a lot less color, but it’s still gorgeous. We even snagged a couple of baby bump shots while enjoying the view. Hello, Baby Howe! 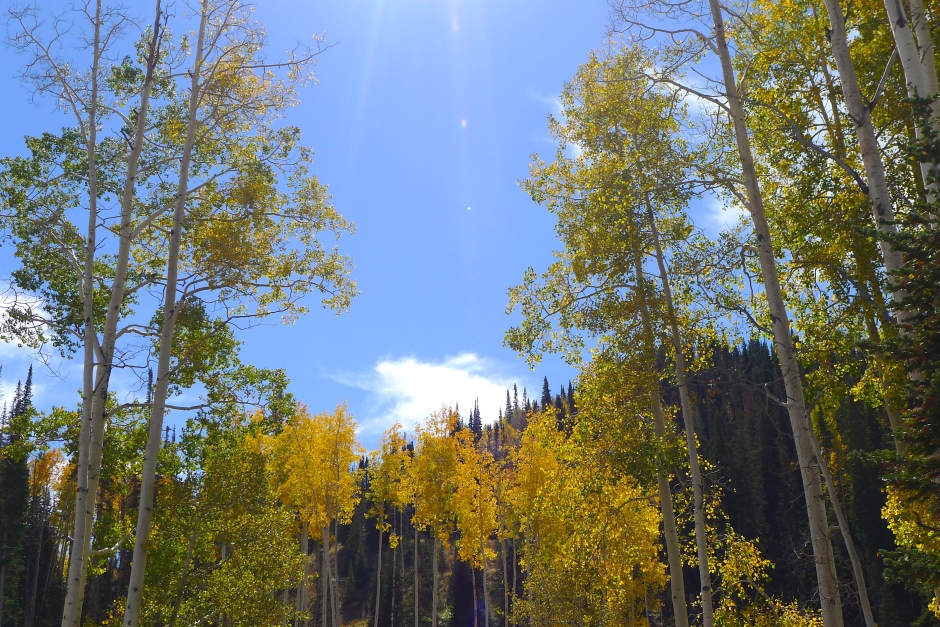 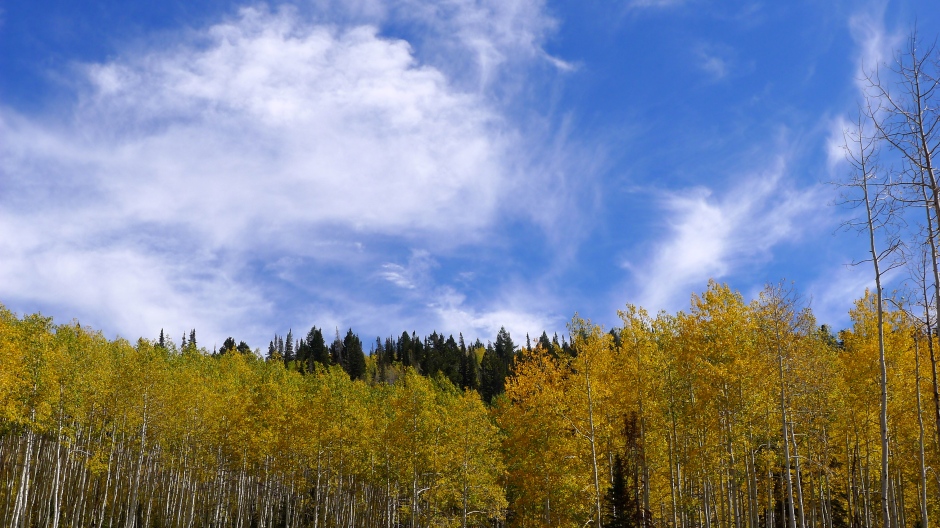 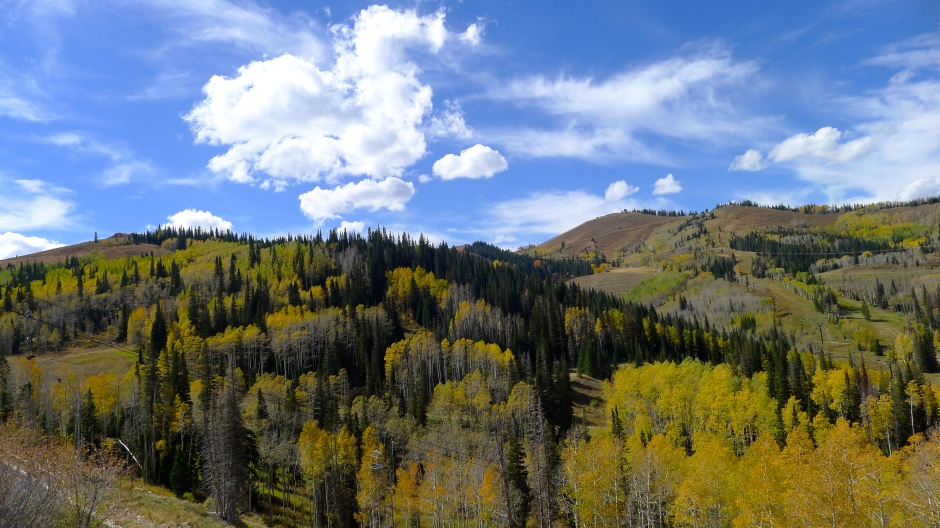 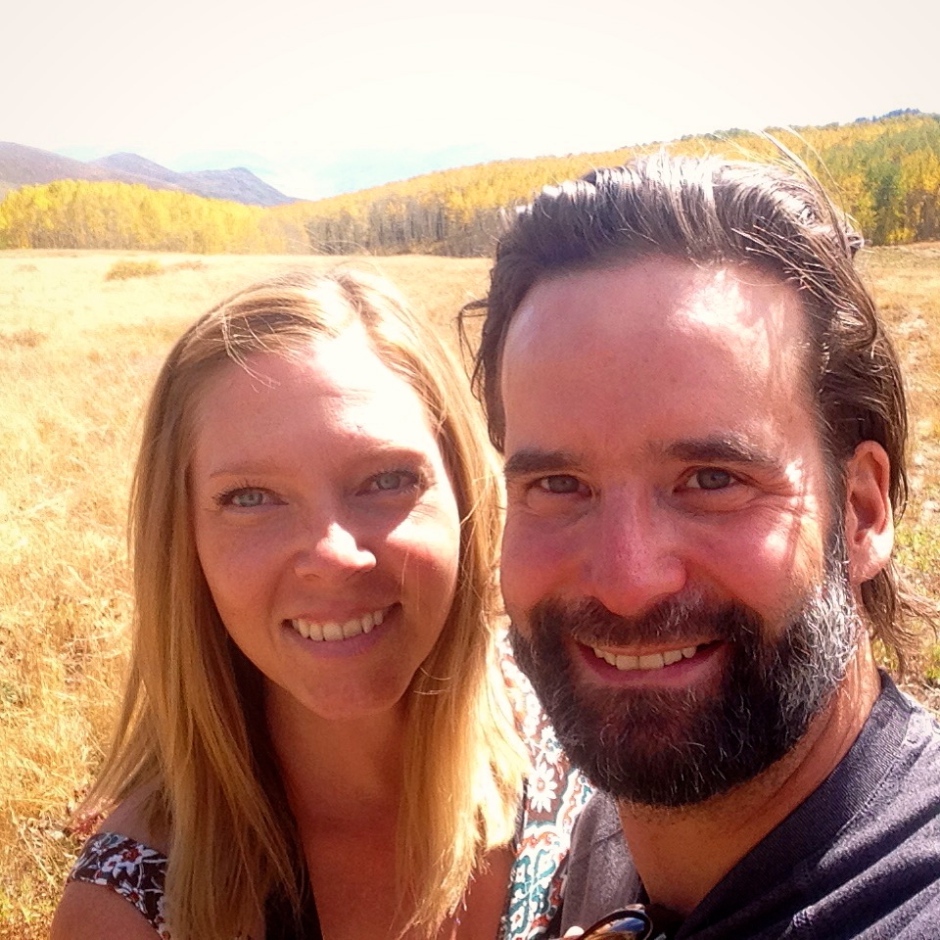 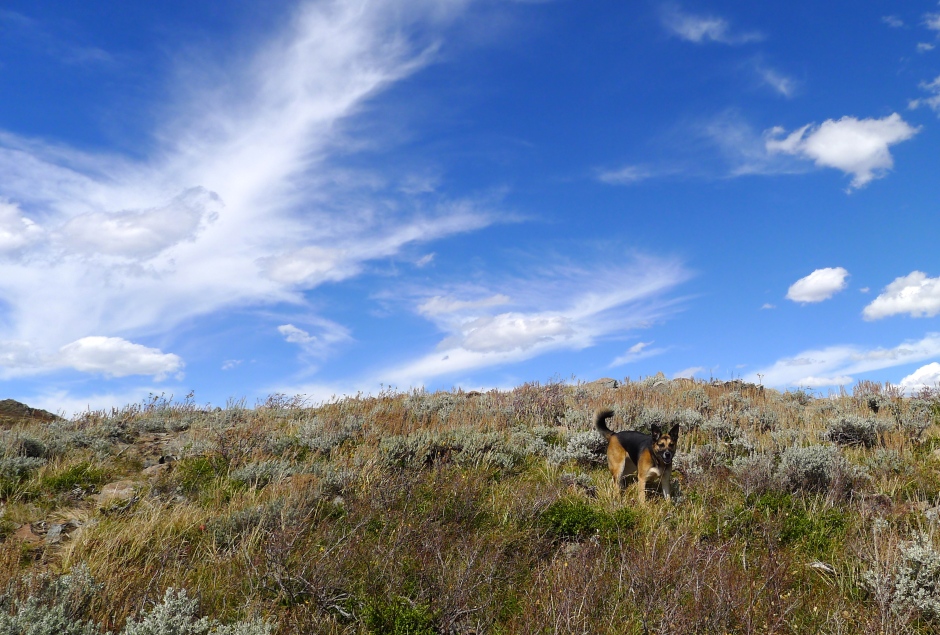 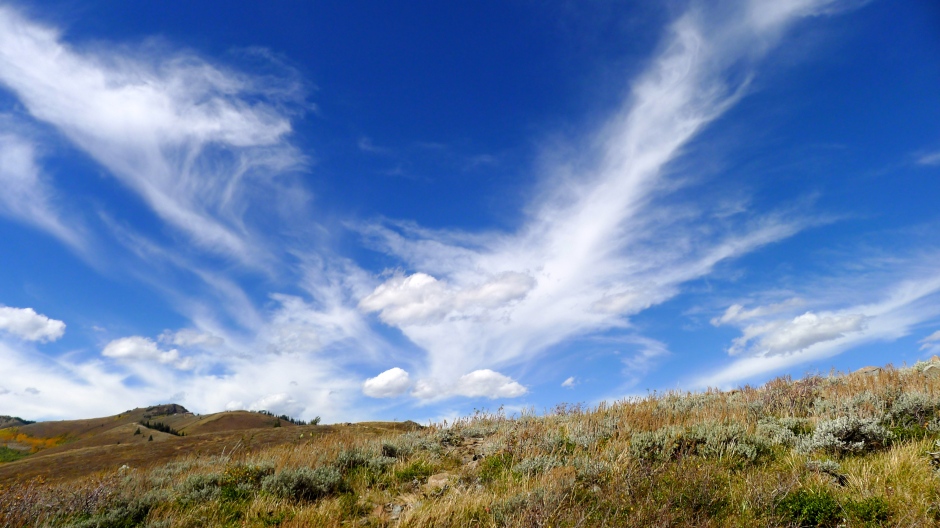 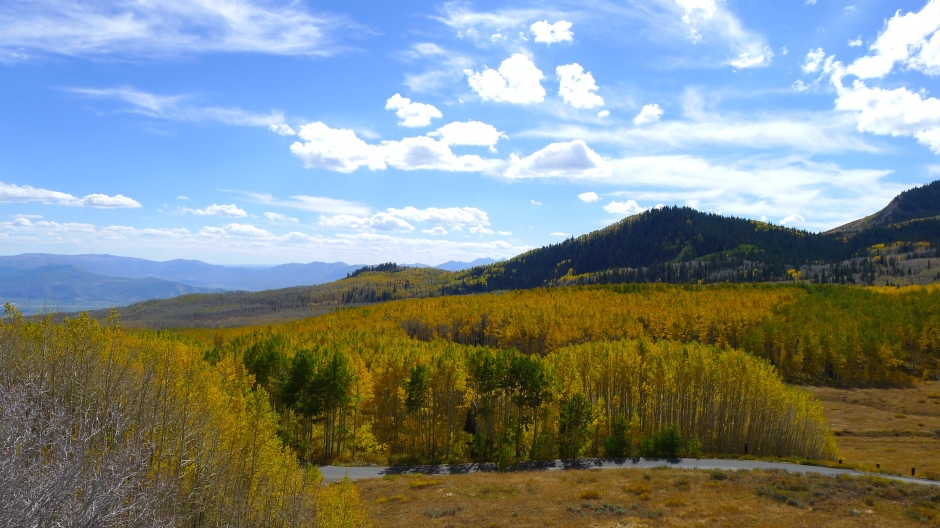 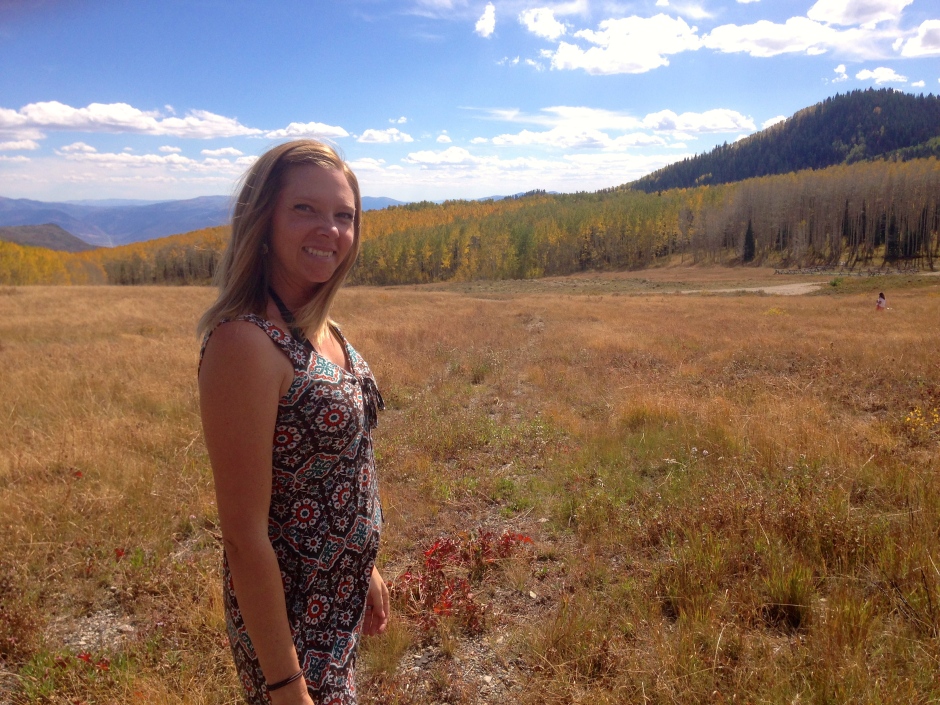 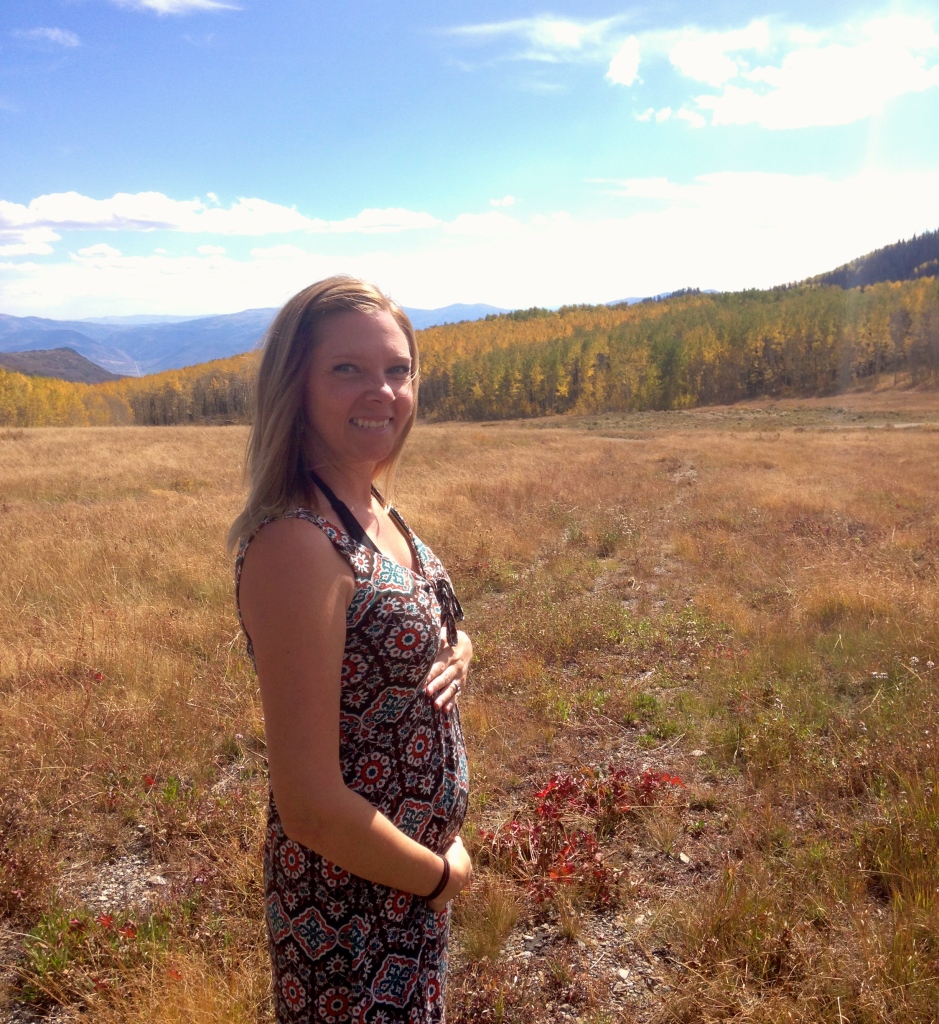 It was so beautiful at that high elevation that I decided to return with Cholula mid-week for a quiet hike. I accessed a trail John had pointed out a little ways below the pass. Cholula and I meandered in and out of pines and aspen groves. The trail zigzagged through Deer Valley Resort’s ski runs, now grassy fields with the last of summer’s wildflowers here and there. Cholula barked at the obviously intimidating chair lifts overhead and chased field mice and chipmunks. Even though I wasn’t at a summit, I had a great view of the top of the pass and Park City below. 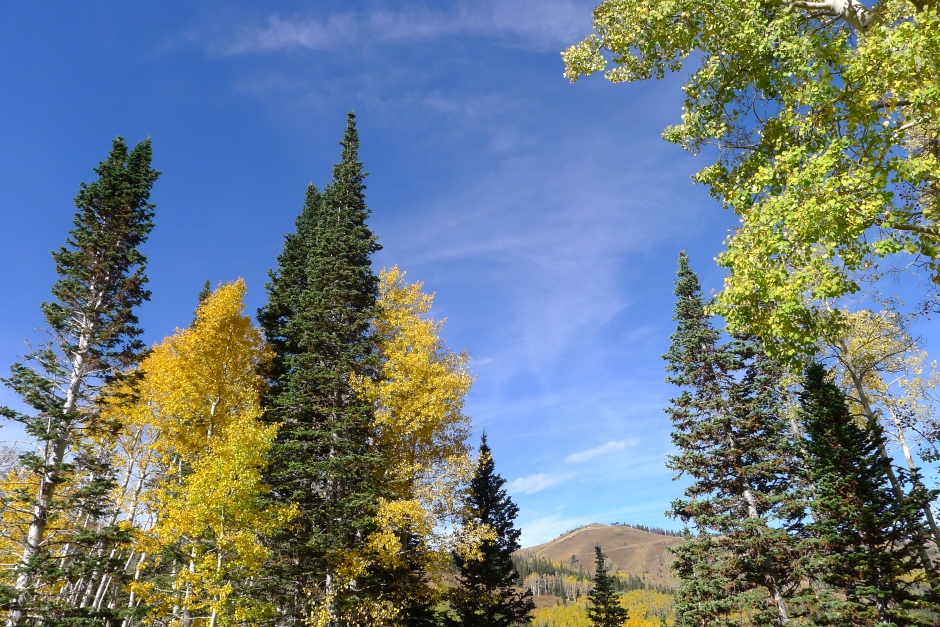 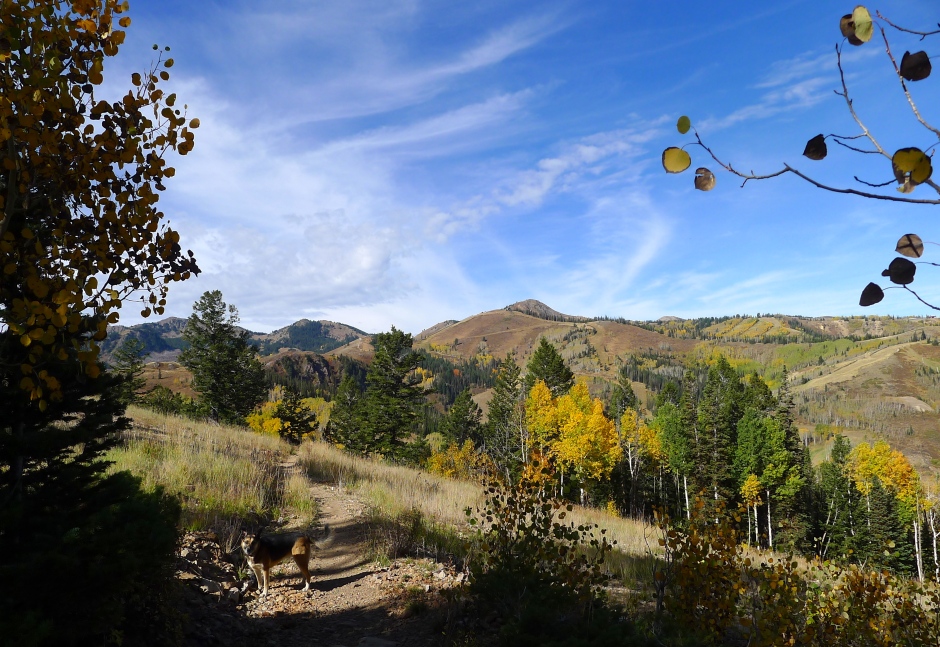 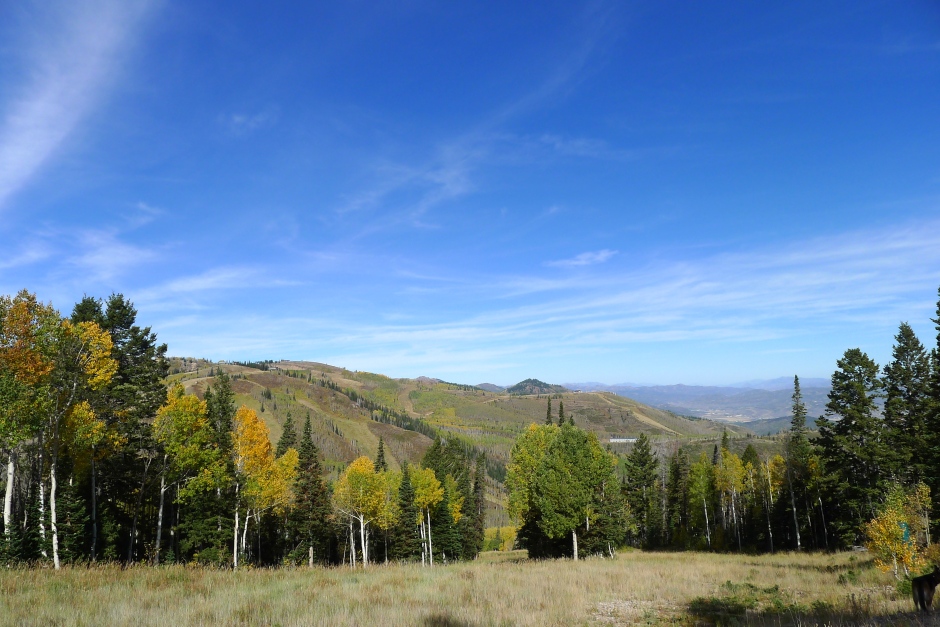 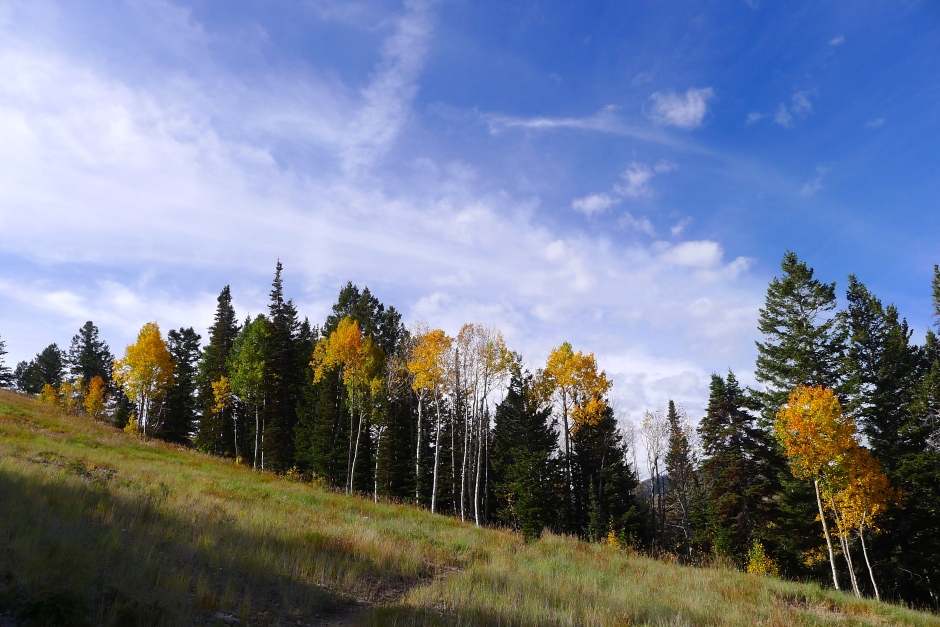 When the chair lifts proved to be too scary, we hopped back in the car to enjoy the last of the aspens over Empire Pass. Before heading back through Park City toward home, I turned down the road toward Midway on a whim. The road was covered in aspen leaves, still fluttering down off of the trees. I spied a semi-hidden trail sign, pulled over, and Cholula and I were off exploring once again. The “trail” was just an old dirt road, winding through grassy pastures and aspen groves. At the lower elevation, the trees were bare, but it was still beautiful. The light was somehow warm and golden, even mid-day. 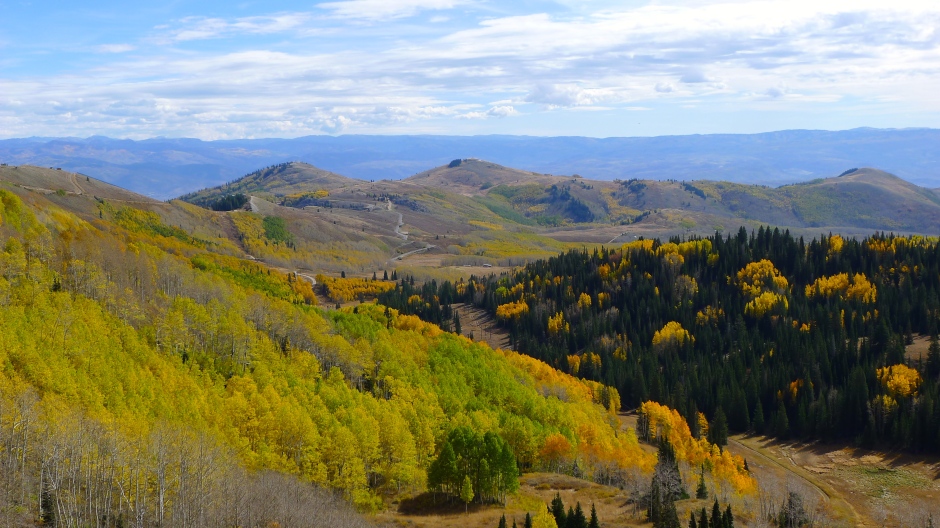 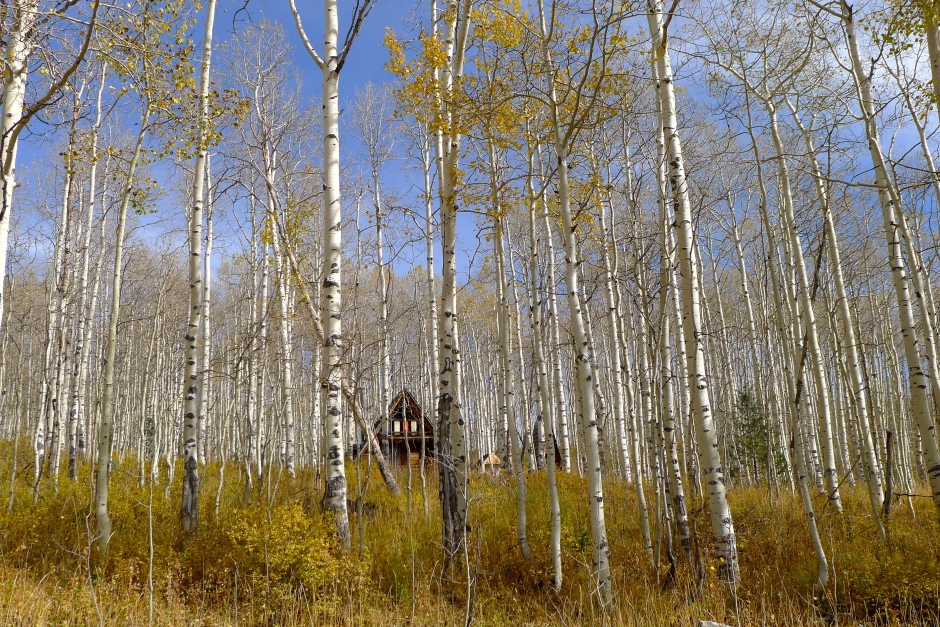 As I strolled through the naked trees, I realized that our Indian summer would come to an abrupt end soon. The first legitimate snowfall will happen by Halloween. I made myself a promise to explore these areas when the trails were covered in snow and drove home, grateful for these beautiful playgrounds all around me.

More of ME in PC.