My father, who worked for an impressive 38 years for the City of Los Angeles, used to say that Monday was his favorite day of the week. Not Friday at 5pm. Not Saturday at 11am. Not even Sunday at kickoff time. On Monday, the whole week is ahead of you. If you’re lucky enough to be good at what you do, you have five full days until the weekend to do it even better. Now that Pops is retired, I’m not sure if Monday has the same meaning as it used to, but his attitude is something to be admired.

The first day of the work week usually gets a bad wrap, but on this Monday, most Americans are gleefully rising later than usual and (hopefully) enjoying the last day of a holiday weekend. An extra day off is a perfect time to try a little something new in the kitchen! I made this recipe sometime last month. Whether or not it was a Monday, I’m not sure, but it happens to be meatless. The next time you’ve got a case of the Mondays, make these Quinoa-Veggie Stuffed Peppers. They are scrumptious. 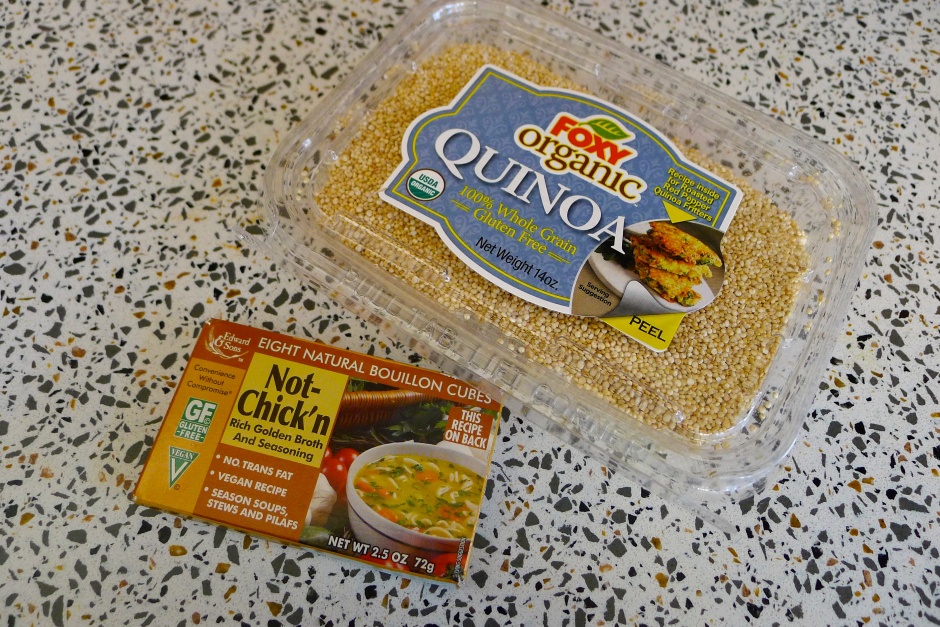 I started by preparing some quinoa in vegetarian “chicken” broth. Next, I cleaned out the veggie drawer and got to choppin’. I had a couple of medium-sized bell peppers, which I’d fill with a combo of the quinoa, shiitake mushrooms, onion, sweet potato, and poblano and jalapeño peppers. I got the onion started in a big skillet, then added the sweet potato (since it would take the longest to get tender). 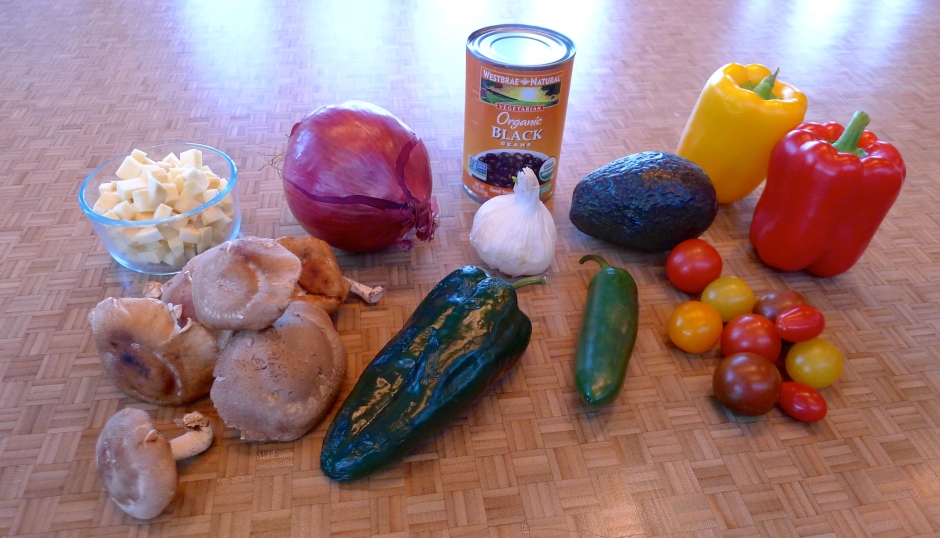 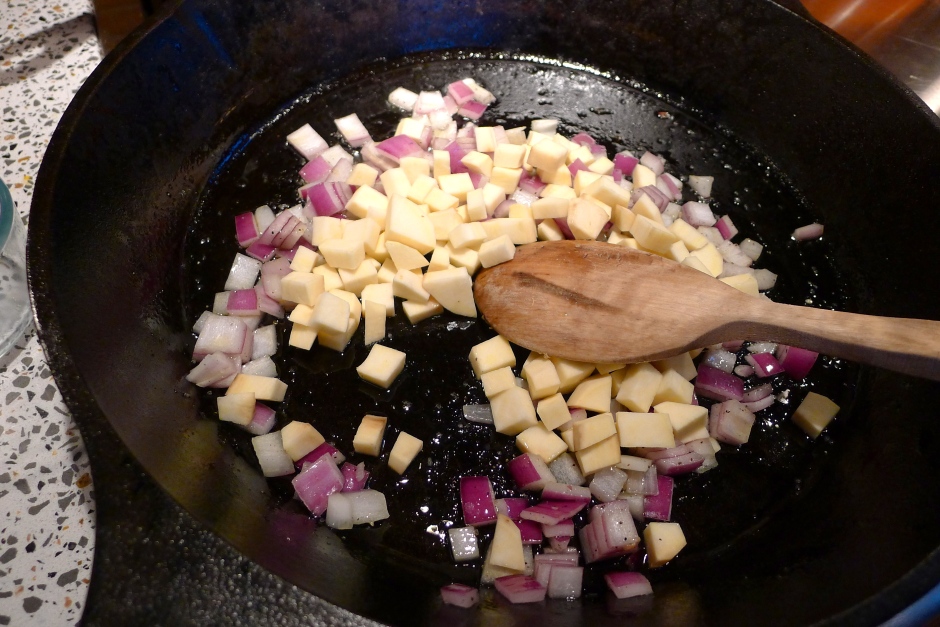 Next I added the poblano pepper and mushroom, and after a few minutes, I added the garlic and jalapeño. While the veggies cooked, John finished up Christmas thank you notes and provided a little background music. Cholula provided, ahem, moral support (Translation: she sat nearby, hoping for cheese.) 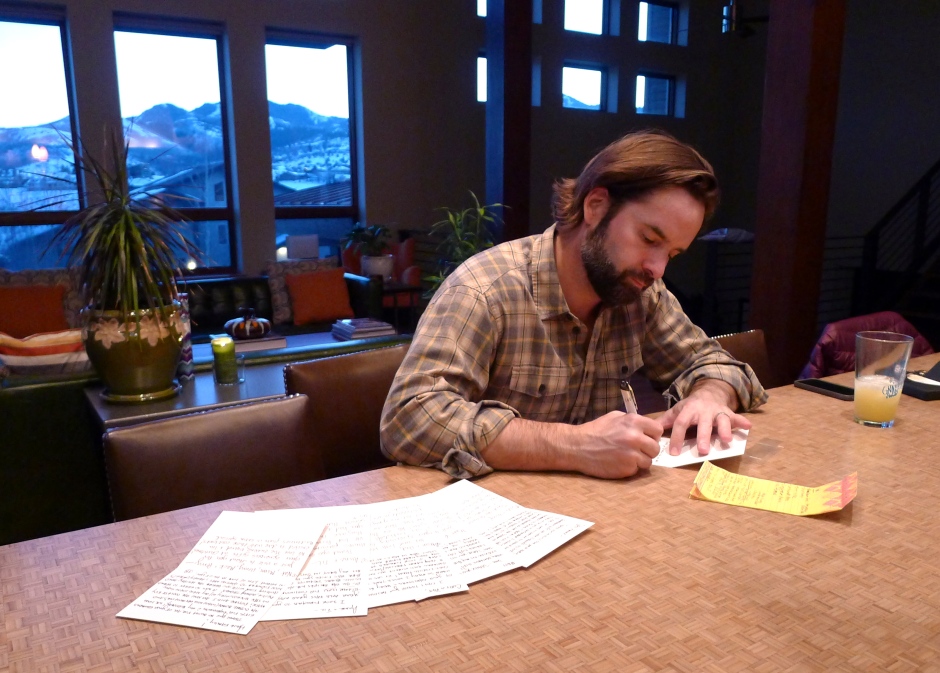 I cut my bell peppers in half, cleaning out the seeds well. I added some black beans to the skillet full of tender veggies, then added the quinoa and some fresh basil. I seasoned the mixture with a little bit of salt and pepper and added a little handful of shredded habanero cheddar cheese before starting to stuff the bell peppers. 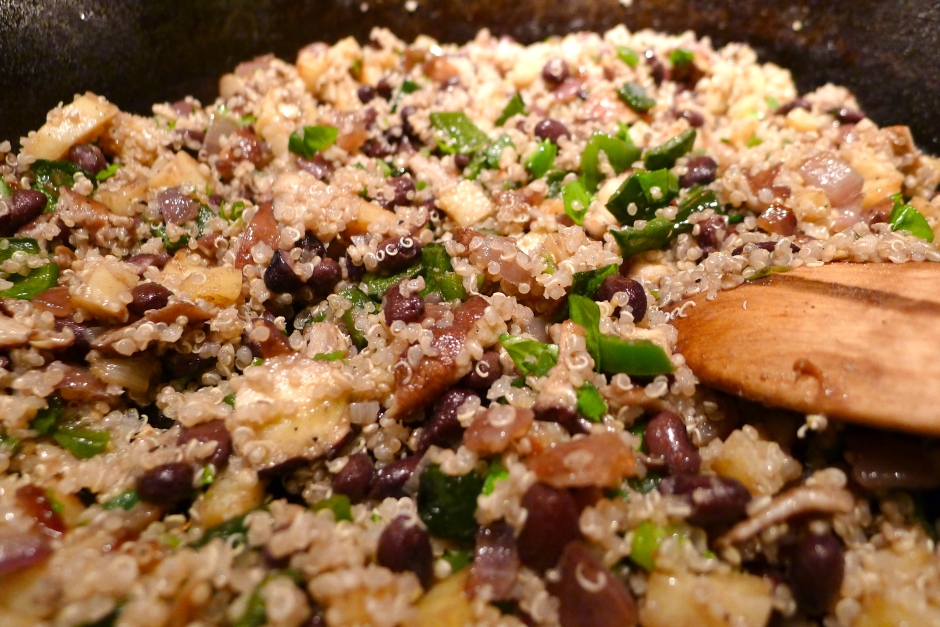 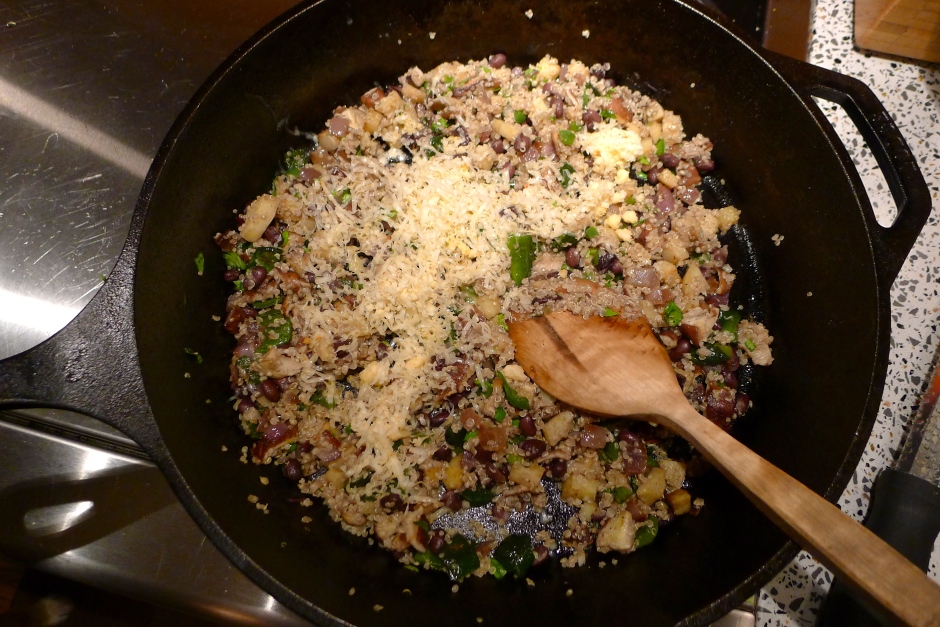 When the peppers were full of quinoa-veggie goodness, I sprinkled the tops with more cheese, covered the baking dish with foil, and popped them into the oven for a half an hour or so. Then I removed the foil and let the cheese get browned under the broiler. 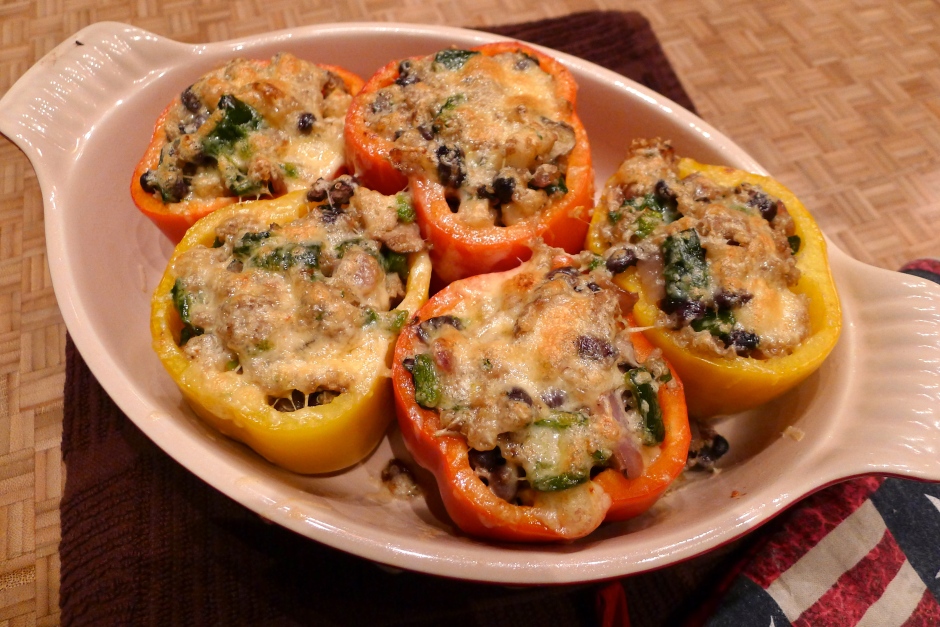 To serve these tasty stuffed peppers, I topped them with fresh chopped tomato and avocado. The quinoa-veggie mixture was delicious, full of texture and flavor and quite filling, thanks to the addition of the sweet potato and black beans. The fresh veggies on top are a good contrast to the tender, cooked veggies inside. The habanero cheddar and jalapeno added the heat that we like, and I love that you get to eat the vessel in which the quinoa is served! 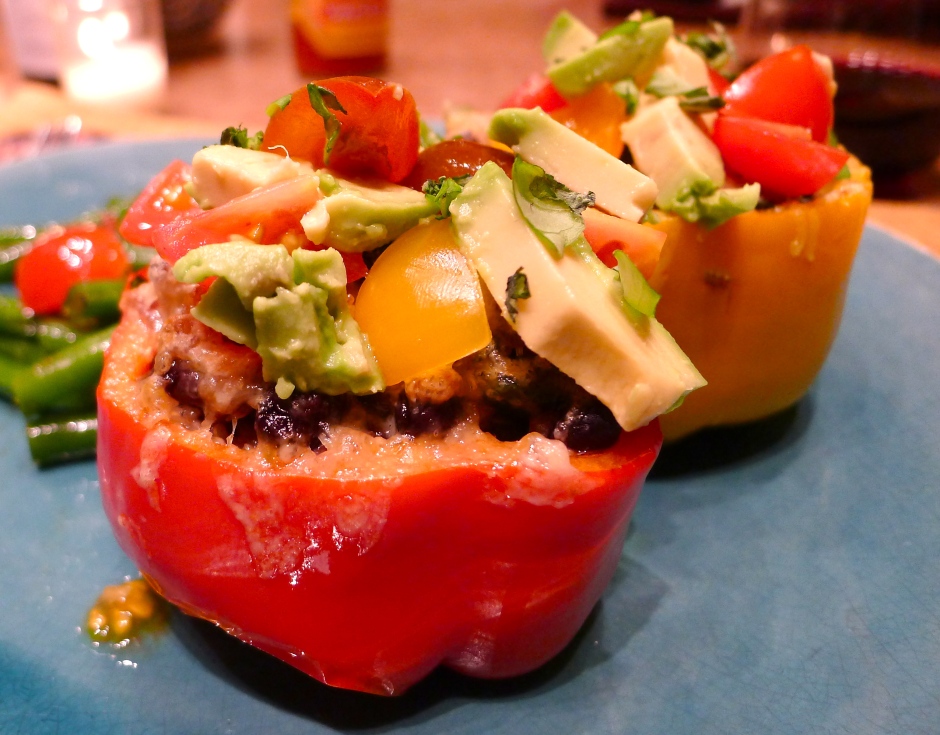 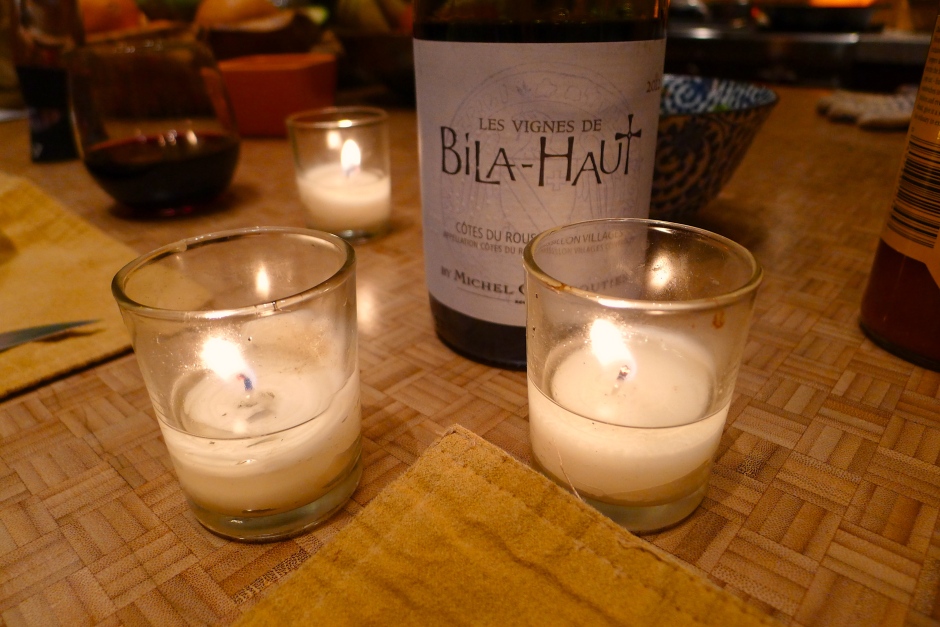 This was my first time making stuffed peppers, and I realize now that really anything goes. Next time, I could use rice instead of quinoa and use whichever veggies I have on hand. I could also add a protein, like grilled chicken, which would be delicious. But I loved that this dish was meat-free and completely satisfying- perfect for a Monday. 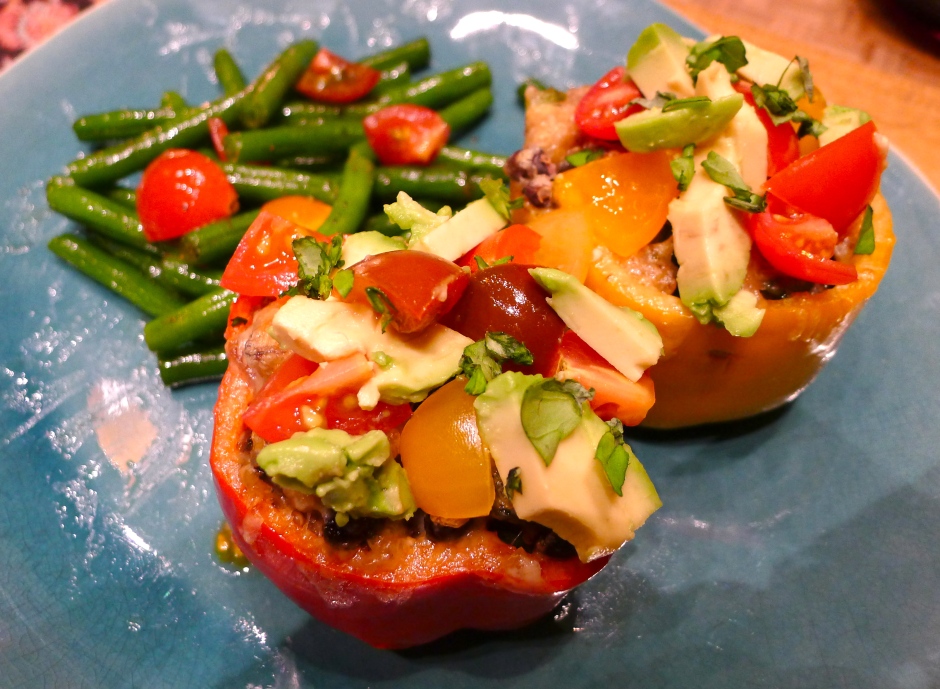 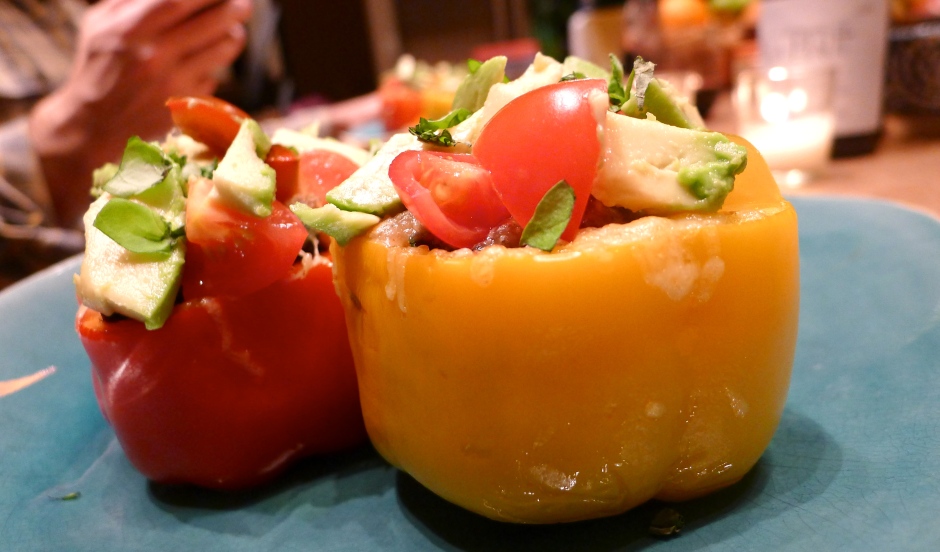 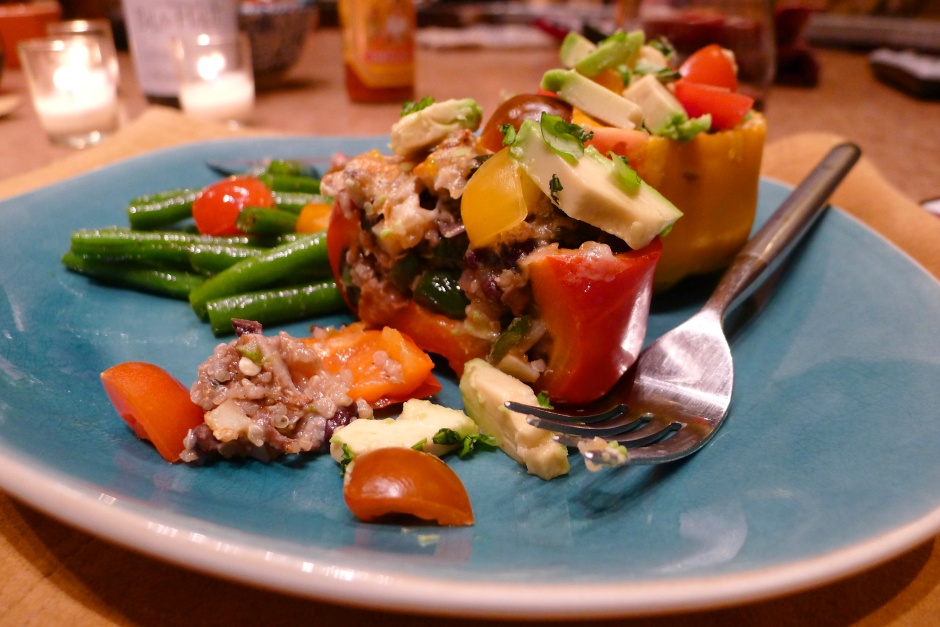 My dad was right. What’s wrong with Monday? It might very well be the best day of the week.

Heat oven to 350 degrees. In a large skillet on medium heat, sauté the onions in a swirl of olive oil. After a few minutes, add the sweet potato. After a few minutes, add the poblano pepper and mushroom. Last, add the garlic and jalapeno. When the veggies are just starting to become tender, add the quinoa, black beans, and basil. Stir in a small handful of cheese and remove from the heat.

Cut the bell peppers in half. Spoon the quinoa-veggie mixture into each half and place in a sprayed baking dish. Top the peppers with more cheese and cover the dish with foil. Bake covered for about 30 minutes, then remove the foil and broil for a little longer (until the cheese browns). Serve topped with tomatoes and avocado and raise a glass to Monday, the best day of the week. YUM.