Is that a thing? If you look on my Food Bliss page, there are now three versions of quinoa, which doesn’t include the green bean/pesto one I made last week using leftovers (so yum). It’s super versatile and a great substitution for rice, pasta, or couscous- but can one over-do it? I hope not- because here’s another quinoa recipe, comin’ at you!

I spotted this Thai Chicken Quinoa Bowl and was inspired. As I usually do, I tweaked the recipe quite a bit- I added more veggies, opted for shrimp instead of chicken, and jazzed up the sauce. My hope was a spicy/sweet bowl of shrimp-y quinoa love!

I got the base of the recipe- the quinoa– started on the stove with a little chicken broth. Then, I started prepping the gorgeous veggies. It’s hard to go wrong when the ingredients to a dish are this vibrant. I love the purplish garlic! The only color missing from the rainbow is BLUE. 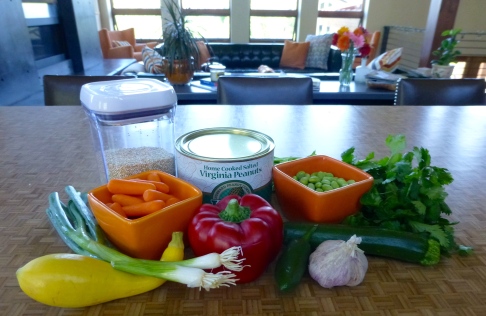 I put all of the sauté-ables into a bowl: red bell pepper, carrot, zucchini, squash, a whole jalapeno, garlic and some green onion. Then, I prepped the mix-ins: shelled edamame, more green onion, chopped roasted peanuts, and some cilantro. 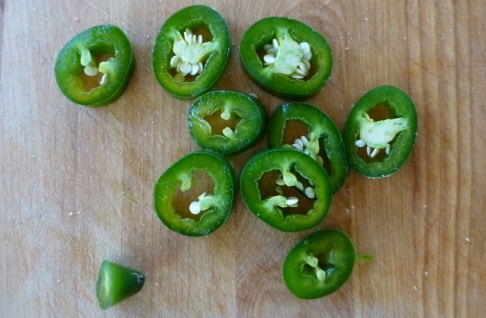 Once my veggies were standing by, I removed the tails from a pound of shrimp and cut them in half, into perfect bite-sized pieces. I seasoned the shrimp with salt and pepper and set it aside. The quinoa was just about done!

The thing that makes this dish special is the SAUCE. Check out the lineup!

I took notes from the original recipe and then sort of just winged it. I started with some sweet chili sauce, then added (too much) coconut milk.

Some peanut butter and lime juice came next, along with chopped garlic and ground ginger. 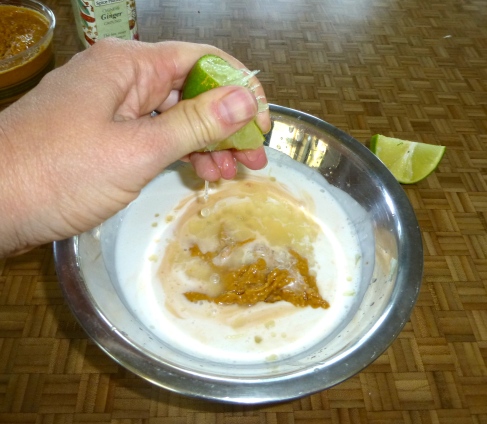 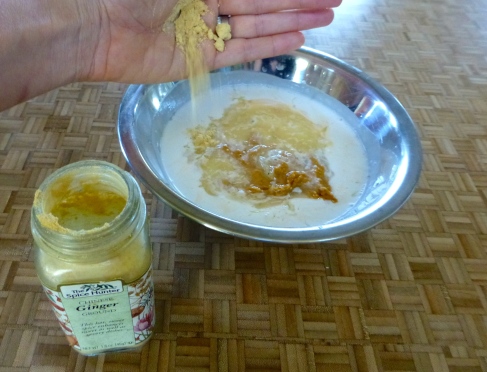 I squirted in some Sriracha sauce for heat, and then a spoonful of Sambal (garlic chili paste). 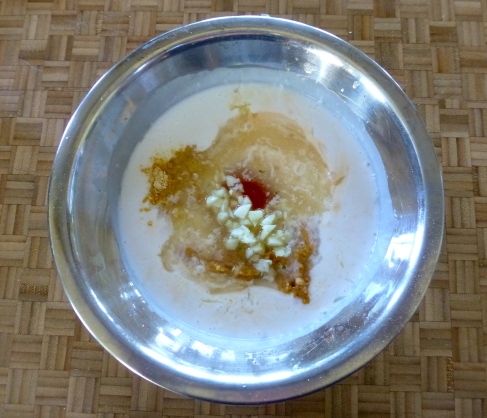 I adjusted the sauce multiple times, not quite happy with the sweetness- adding more peanut butter here, tossing in more Sambal there. I used far too much coconut milk than I should have, but finally settled on a tasty peanut sauce.

Showtime! I heated some oil in a skillet and tossed in the shrimp bites. After a minute or so, I added the bowl of veggies. Rainbow! 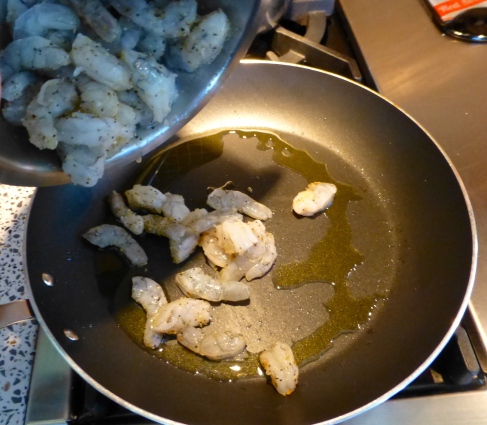 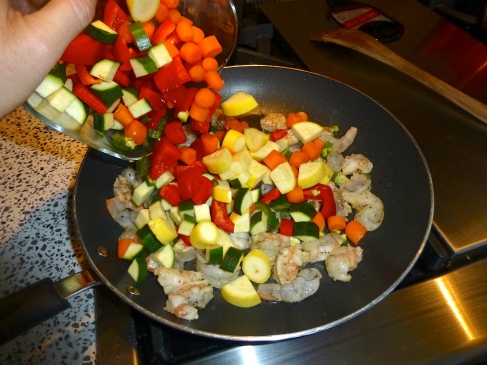 It didn’t take long for the shrimp to be done, and I pulled it off of the heat immediately- I didn’t want to cook the veggies all the way through. Crunch is good! Into the bowl of quinoa it went. 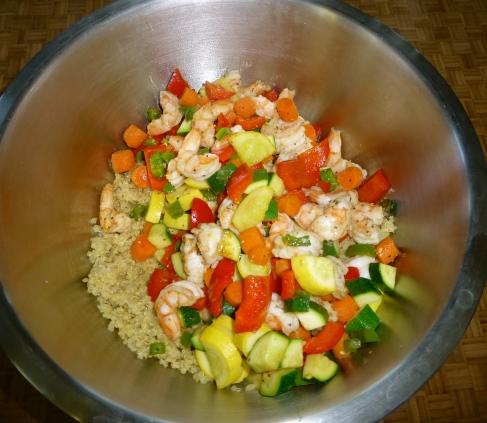 Next, I added the edamame, half of the chopped peanuts and green onion, and most of the cilantro. Love the bold colors! 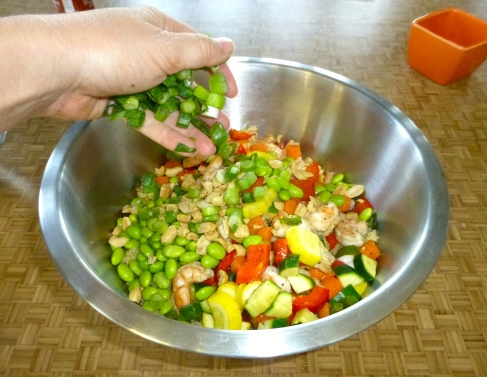 It was time to add the sauce. I started slow, adding less than half of what I’d made. I gave it a good stir and let the peanut sauce be absorbed by the quinoa. I shook some toasted sesame seeds into the bowl and served up our supper! 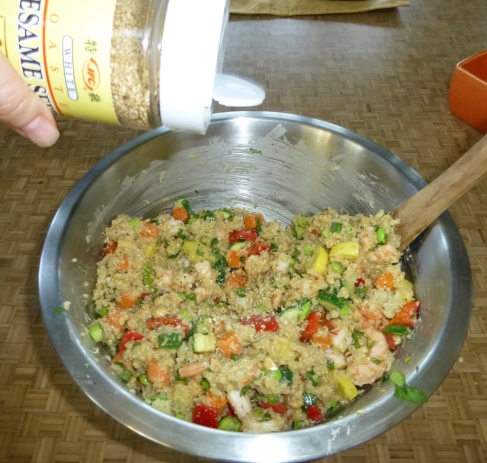 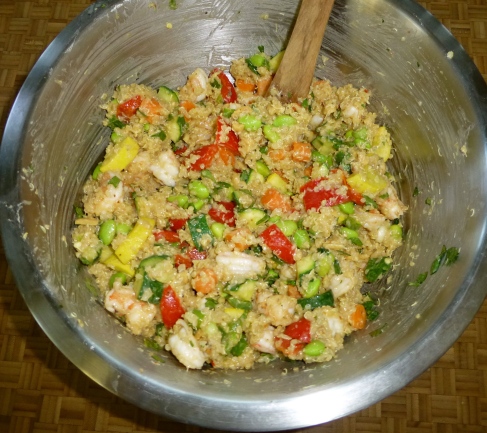 The veggies and peanuts gave the dish an awesome texture. Because I used natural peanut butter (instead of creamy), the sauce wasn’t as smooth as I would have liked. Next time, I’ll add less coconut milk and more lime juice. It would be scrumptious with chicken, tofu, or just the veggies! I almost think it would be better served as a chilled quinoa salad. In any case, we cleared our bowls!

Add this one to the quinoa recipe list! I guess I haven’t reached my limit, after all.

Thai Shrimp Quinoa (adapted from How Sweet It Is)

Prepare the quinoa according to directions.

While quinoa is cooking, combine all of the sauce ingredients in a bowl. Whisk to combine and set aside.

Cut the shrimp in half. Season with salt and pepper. Sauté the shrimp in a little olive oil over medium high heat for about a minute. Add the carrot, bell pepper, zucchini, squash, jalapeno, 2 cloves garlic, and half of the peanuts and green onion. Sauté, stirring constantly, until the shrimp are cooked. Remove from heat.

In a large bowl, combine the quinoa, sautéed shrimp and veggies, the rest of the peanuts and green onion, and most of the cilantro. Slowly pour some of the sauce into the bowl, starting with a little bit and adjusting the sauce amount to taste. Stir well and serve topped with cilantro and a wedge of lime. Yum!

**For a full list of recipes (and kitchen adventures), check out the Food Bliss link!**