To paraphrase Forrest Gump: A day spa is like a box of chocolate. You never know what you’re gonna get.

At least, that’s been my experience. I mean, it’s a SPA. It means being in a robe and sipping cucumber water or exotic tea and escaping real life for a bit, having something fabulous done to your body that will make you glow and relax. How bad can it be? I’ve had some positively magical experiences in the past, like the time my best friend and I visited a local spa. Ahhhh. But I’ve got some tales to tell, too.

Once, in a hotel spa, a very sweet but VERY pregnant woman was my masseuse. I was so distracted by her obvious discomfort (made clear by constant, loud, unhappy sighs) and her cute-but-giant tummy bumping into me so often that I never came close to relaxing. When I left, she barely responded as I thanked her. She looked at the tip amount on the credit card slip while standing in front of me, slumped her shoulders, and walked dejectedly away. I had left 25%. FAIL.

Another time, during a couple’s massage years ago, my masseuse’s skill and sweet demeanor couldn’t erase the relaxation-canceling sounds of grunting, groaning, sniffing/coughing, and more coming from my date’s masseuse. Periodically, she would stomp over to a side table and take a noisy slurp from a giant BIG GULP, which was almost empty. (You know that sound.) At one point, my masseuse bent down and whispered, “I’m so sorry.” I tried not to laugh, wished for earplugs, and made a mental note of the noise-maker’s name- I’d avoid her next time. FAIL.

At another spa, in the middle of my massage, the power went out. That meant a halt to the calming music and bubbling brook sounds from the water fountain in the corner of the room. It meant the dim lighting in the room the masseuse was using to see what part of my body she was working on was gone. In the pitch black, I laid there listening to other employees running through the halls, giggling and shrieking to each other. My masseuse kept right on massaging me, in the dark, groping around blindly and kicking a stool at one point. In between a discussion about the cute boy at the bar the night before (which I heard clearly), the front desk girls were calling appointments for later in the day, canceling them due to the power outage, and laughing loudly about an unexpected day off. I was the opposite of relaxed. I kind of expected a discount or a credit for a future service- at least an apology. Nope. FAIL.

I know… these are what we call First World Problems. It’s a luxury to even have the opportunity to pay someone to make you feel like royalty, even for 60 or 90 minutes. But the word “spa” brings with it an expectation of service and quality. Day spas aren’t inexpensive. Whether it’s a pedicure, a facial, a massage, or some other kind of treatment, you shouldn’t have to wonder if your technician knows that they’re doing or regret that you spent money on a bad experience.

The other day, I mentioned a backache, leftover from a snowboarding fall. John surprised me with a massage (and pedicure) and one of the nicest spas in Park City. Giddy at the thought, I drove toward town and wondered what the spa at the new Montage Resort was like.  Built just a few years ago, it’s part of Deer Valley Resort, which has a reputation for quality and service. And for being really expensive. I drove toward Park City, seeing the ski runs of Deer Valley in the distance. 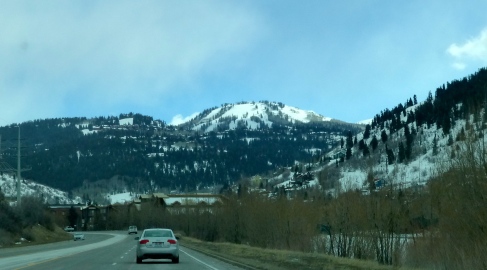 The road to the Montage is the same one I use to head to some hiking trails in the summer. (Remember this? Oh, and this?) The area is also stunning in winter. Extraordinarily large vacation homes poked through the bare aspens and I strained my neck to get a better look as I drove past. 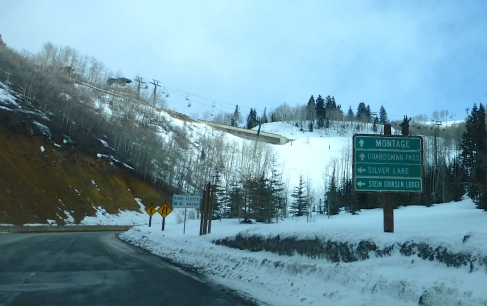 And then, the monolith that is the Montage was ahead of me.

Confession: When the Montage was being built, I wasn’t happy about it. It’s in a pristine valley and seemed too big, unnecessary. It’s not like it’s quaintly tucked into a canyon. It’s over-the-top grandiose and it’s supposed to be that way. As I turned into the drive, I wondered what kind of fancy products stocked each guest room. (I’ve mentioned my “stash the loot!” issue with hotel bath care products.)

I handed my keys over to the valet and entered the massive lobby. I’d get lost in a heartbeat here, no question. Everyone who saw me welcomed me kindly, and the women behind the front desk gave me directions to the spa. I walked past paintings almost as tall as me. It was all very beautiful. 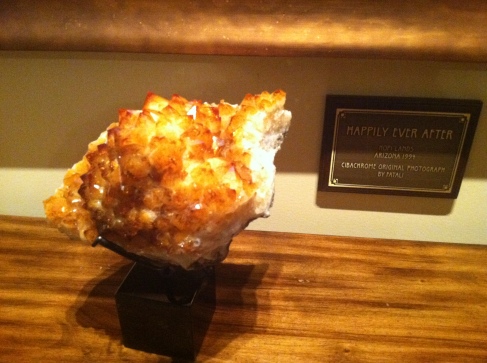 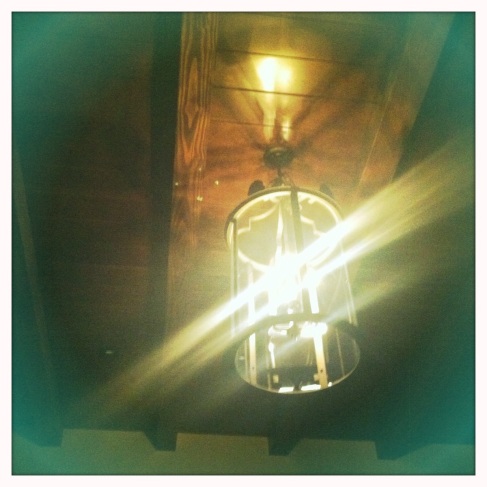 The spa itself is so large that they have guides to show you around. I was given a tour of the changing area, which was lined with dark wooden lockers (I got lucky #13!). There is something they called The Wet Room, with fully-stocked showers, a sauna, a steam room, and a bubbling Jacuzzi. Separate from the large restroom area, there was a section set aside for styling hair- brushes, hairdryers, and any product you could need were available. They’d thought of everything. 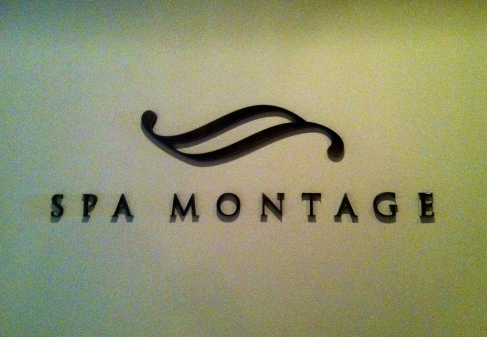 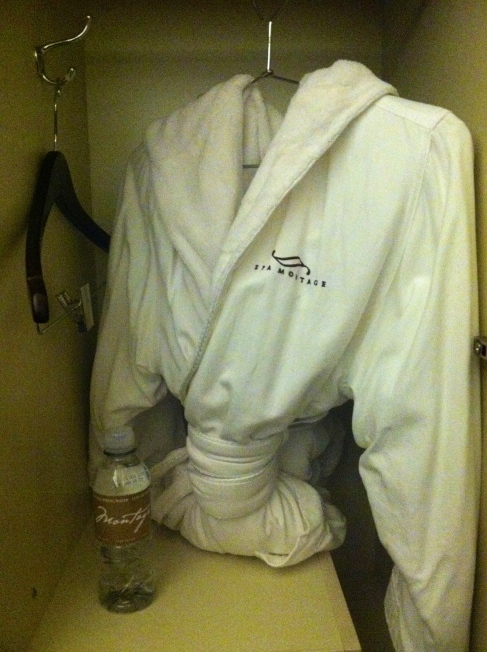 And then there was The Women’s Lounge- a beautiful, quiet area with all sorts of nooks and crannies to tuck into before or after your spa treatment. A fire was blazing. A tea bar was available with tasty hot teas and little jars of honey. Granola bars and dried fruits were displayed to snack on. I changed into my luxurious hooded robe and found a cozy chair with an ottoman, a magazine, and an attendant who brought me a glass of wine. It was served on a tray with a yellow rose. The initial experience was almost enough, even without the spa services I was scheduled for! 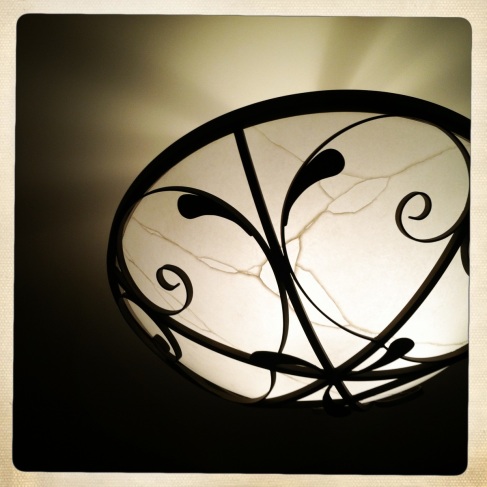 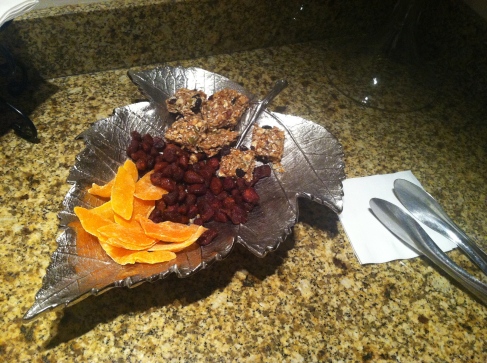 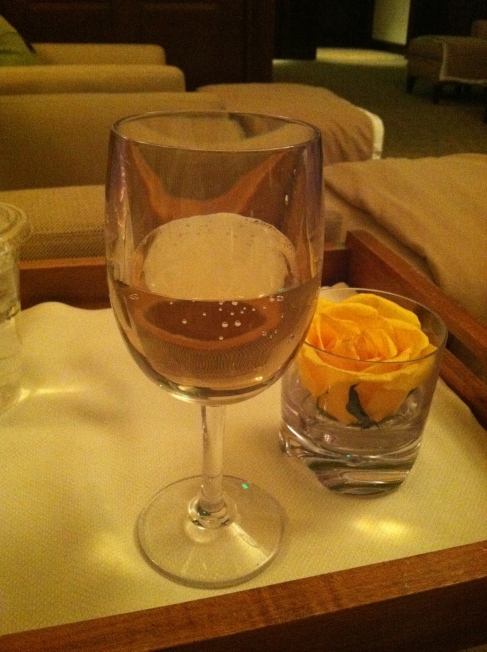 After a while, another attendant arrived to introduce me to Mar, my masseuse. She led me through a maze of hallways to a beautiful little room, kindly smiling while I snapped a photo of the gorgeous view through the window. I don’t usually like to chat throughout a massage, but toward the beginning, we learned that she’s friends with my acupuncturist. Our mutual friendship prompted an easy conversation throughout my hour-long rub down. She focused on my lower back, the reason for my spa visit, but somehow fit a full-body massage into our short time together. John had mentioned deep tissue massage when he made the appointment, which is what he loves but I can’t handle. Mar was certainly strong enough for deep tissue work, but tailored the pressure for me. It was a fabulous massage and felt like much longer than 60 minutes! 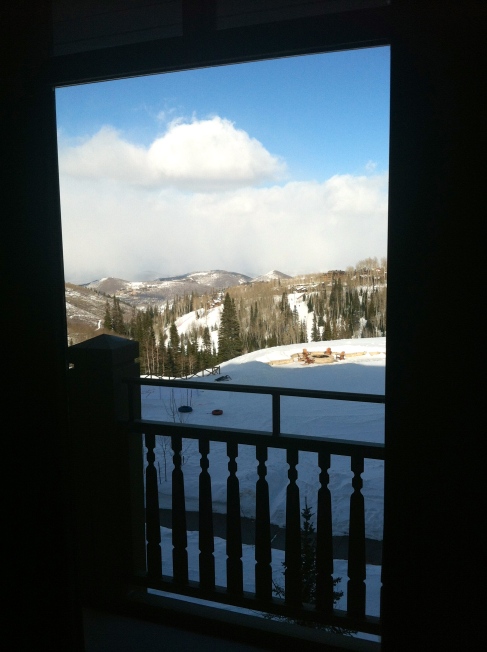 I had about a half an hour until my pedicure was scheduled, so I shuffled over to the hot tea bar in the Women’s Lounge. Individual tea boxes were displayed in a wooden box, a plate of tiny honey jars nearby. I chose a Sweet Ginger Peach flavor and stirred in a bit of honey before settling into an overstuffed chair in front of the fireplace. Talk about bliss (and the tea was scrumptious!). 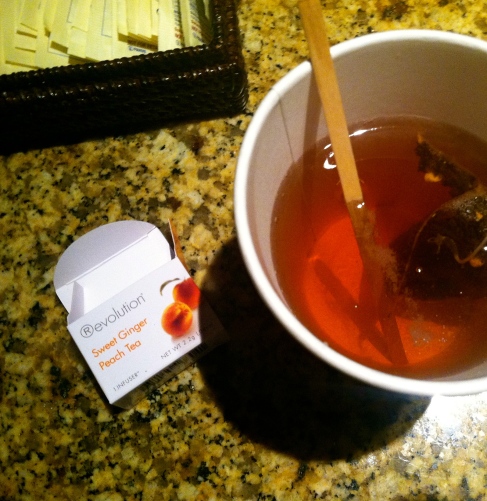 My pedicure took place in the salon attached to the spa. The brightness of it was a little jarring after my dimly lit semi-nap in front of the fire, but the salon was classy and beautiful. Large versions of classic Vogue covers decorated the walls. I selected a bright orchid-y magenta color for my toes and settled into my reclining leather chair with a magazine. As far as spa pedicures go, it was fantastic– I love the sugar scrub on my feet and lower legs, and my feet were spoiled with their second massage of the day.

I’d say my nail technician was a bit of a perfectionist, working hard to get each toenail just right. The result was a pair of quite pretty feet. I took great care not to ruin her hard work when I slid my jeans back on. I wore the disposable sandals home, toting my boots under my arm as I exited the spa. My sweet hubby had already arranged the payment and tip so I wouldn’t have to deal with it. What a special treat!

The pine trees lining the drive to the Montage were lit up now that the sun was almost gone. Twinkling white lights waved goodbye as I drove past. A glance in my rearview mirror revealed the monolith, now masked by shadows. I may not be a fan of the colossal new building, unable to blend into the hillside. But I can’t say one bad thing about my day at the Montage Spa.  It was a delightful experience. I’d even tucked a couple of mini-boxes of the delectable Sweet Ginger Peach Tea into my bag on the way out. Stash the loot!

Spa Montage would not join the ranks of my day spa horror stories. I showed John my perfectly pretty toes and thanked him with a kiss. Even if my experience had been less than amazing, I probably wouldn’t tell him. It was too sweet a surprise.

**Do you have a spa horror story? Have you ever paid too much for a bad experience? Do share!**