Our introduction to California was perfect.

My only complaint about the first leg of our road trip? It didn’t last long enough. Before we knew it, we were descending out of the Sierras, following a winding road through shady pine groves until they were slowly replaced by over-dry grasses and oak trees. The temperature rose another degree with every 100 feet we dropped toward sea level. Soon, we were IN IT: freeways, interchanges, traffic congestion, exit numbers, brake lights. We landed in Oakland, where we were greeted by old friends at their beautiful home. The men had business to discuss, so I enjoyed the company of my hostess and also my good friend, Nancy. (You’ll remember her from our Bozeman adventures!) We caught up over a bottle of wine and then we all headed out for an incredible meal. The only photos I took were of a brilliant sign and a dark shot of our clinking glasses at dinner. Camera addict FAIL.

On Friday, I awoke with the butterflies-in-the-tummy feeling of Christmas morning. Today was BIG. After 15 years of yearning to see Neil Young play live, I was mere hours away from it actually happening. But John had more meetings that started early, so I consulted Google Maps, crossed my fingers, and headed toward Nancy’s neck of the woods to visit her new home. I welcomed the distraction from the approaching concert jitters, and looked forward to time with my friend.

I have no idea how I made it, but I did. Five freeways later (plus a toll bridge), I made it to Redwood City. I got the tour of the new house and was presented with two awesome gifts!

We headed toward Stanford to get a hug from her husband, Spencer, and take a tour of the gorgeous campus. I was a tad overwhelmed at its size but loved the rural feeling, even in the middle of a university. I learned that it’s called The Farm. My favorite feature was a wall of words that lit up periodically. 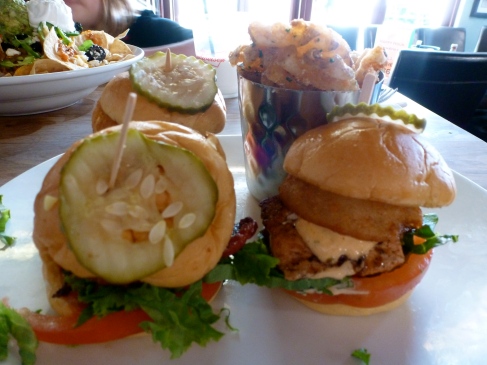 We laughed through a tasty lunch of salmon sliders (yum!) and some kind of delish Prosecco-y cocktail in Palo Alto. As soon as our time together had begun, I was hugging Nancy goodbye and trying to backtrack to Oakland. I had a date with a rockstar, and I didn’t want to be late. A traffic-laden trek was highlighted with another Neil song on satellite radio, keeping me motivated.

We hugged our hosts goodbye and headed toward downtown San Francisco. As we drove over the Bay Bridge, I saw the city across the bay and bit my lip with excitement. 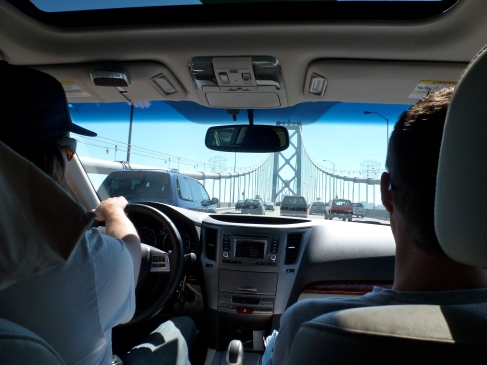 We checked into the W Hotel, where other friends were also staying. I’ll pause here to say that it’s a lovely, hip hotel with spacious rooms and modern, cool touches. It was a good mix of funky and classy, and it provides BLISS bath products! I particularly loved the artwork, and the view was awesome. 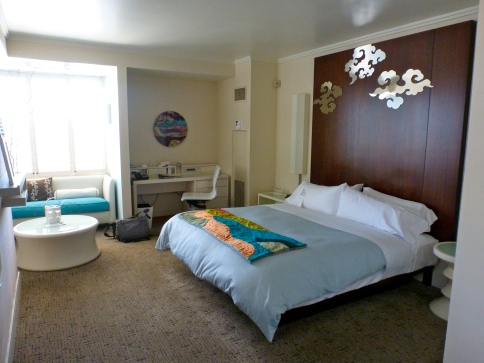 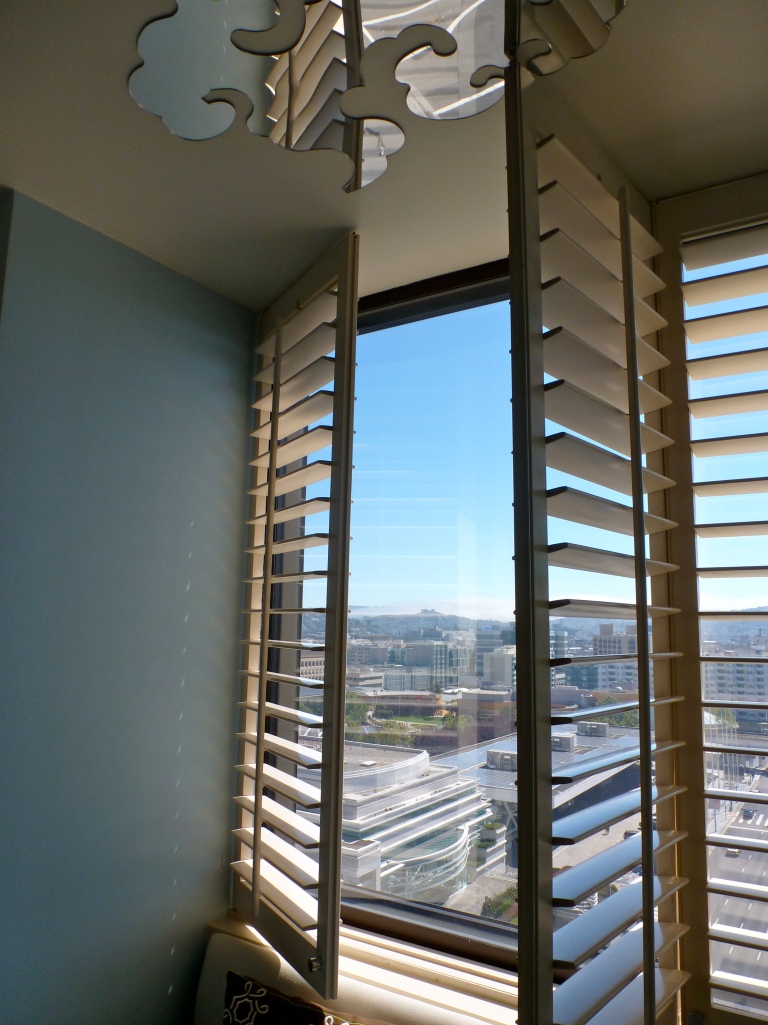 We took a car toward Golden Gate Park, and I think John was just as excited as I was. This was really happening.

John had attended the Outside Lands music festival last year, but this year, the three-day extravaganza was sold out and the lineup included huge, big name bands. There were plenty of bands I would have loved to have seen, but I really only cared about the main stage headliner on Friday night.

I was completely unprepared for the number of people at the festival. As we got our VIP wristbands and showed our IDs, I glanced around at the scene. It wasn’t until we went up over a rise that I sort of freaked out. There were people everywhere. I clung to John’s hand and must have said, “Don’t lose me!” 10 times on our stroll to the VIP zone. It was amazing!

The VIP area at Outside Lands is just a perk that you pay more for. There’s a private bar area in a tent so the lines are shorter, and a separate bathroom area (no porta-potties). There is a lounge area with a view of the stage, but it’s not super close. There’s a roped-off area on the grass where you can get up closer to the stage. The breathing room alone, with just a bit of distance from the throngs of fans, made it seem worth the extra expense. 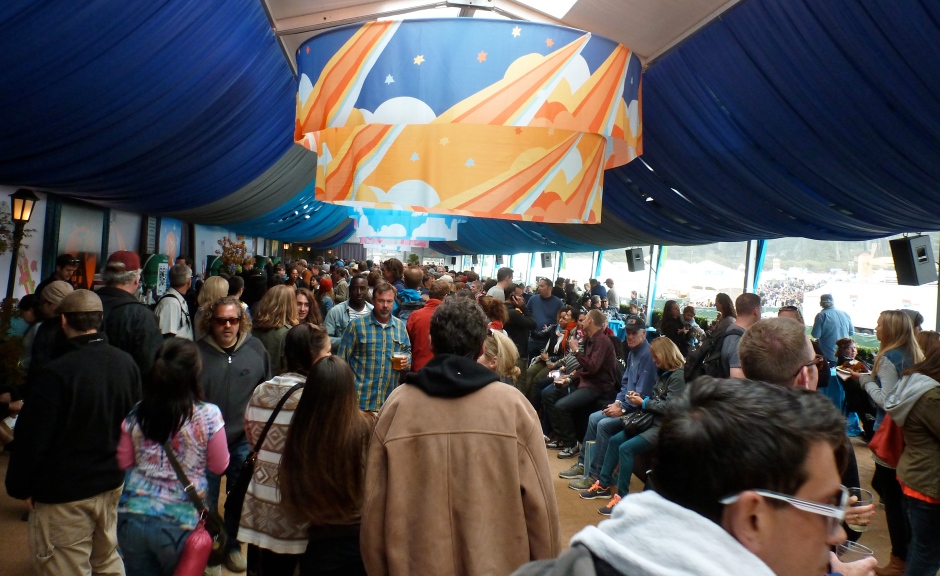 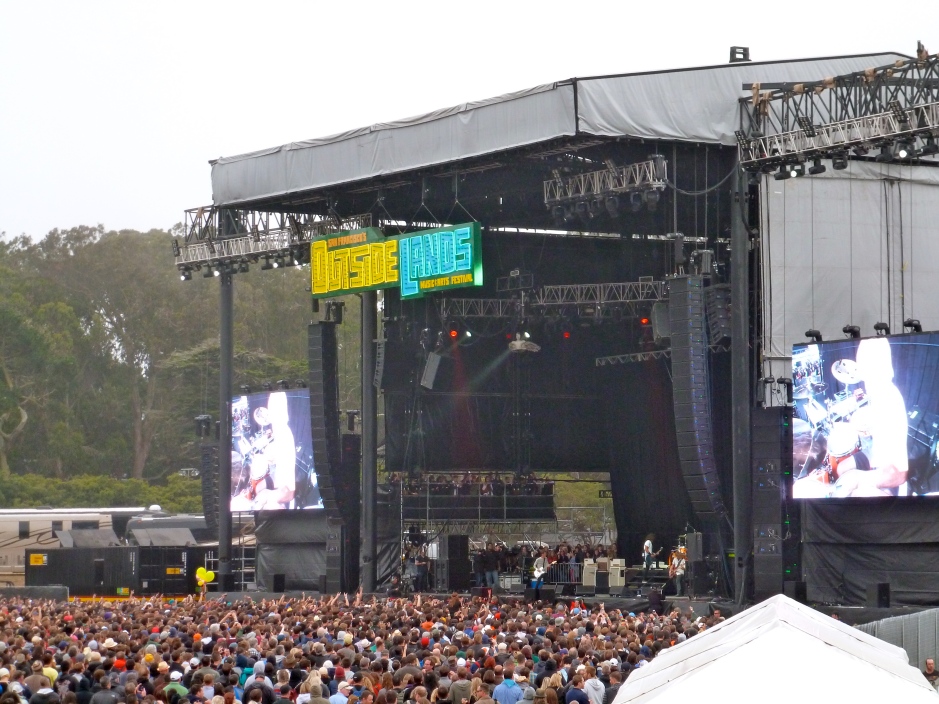 Foo Fighters playing above. Did I mention it was crowded? 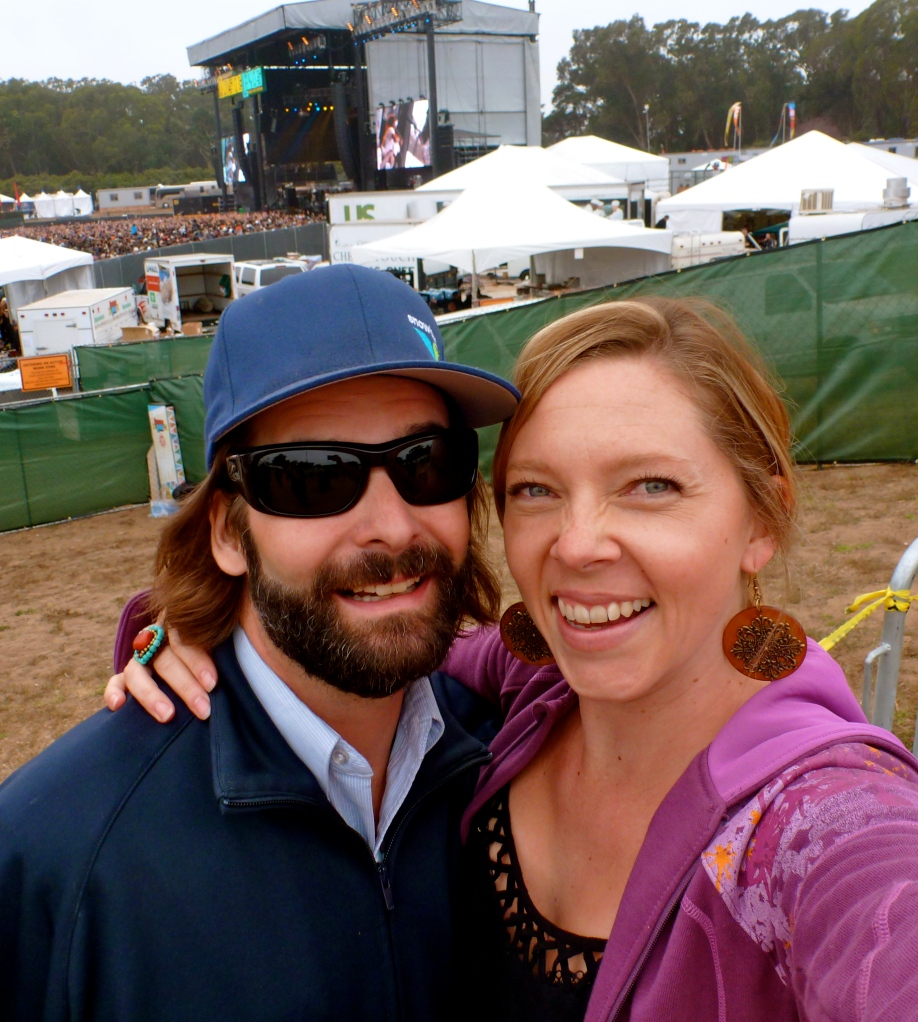 We hung out with friends and sipped cocktails while we watched Beck and then the Foo Fighters have their time on stage. Both rocked! And then, the moment I’d been waiting for was upon me. We headed toward the stage! 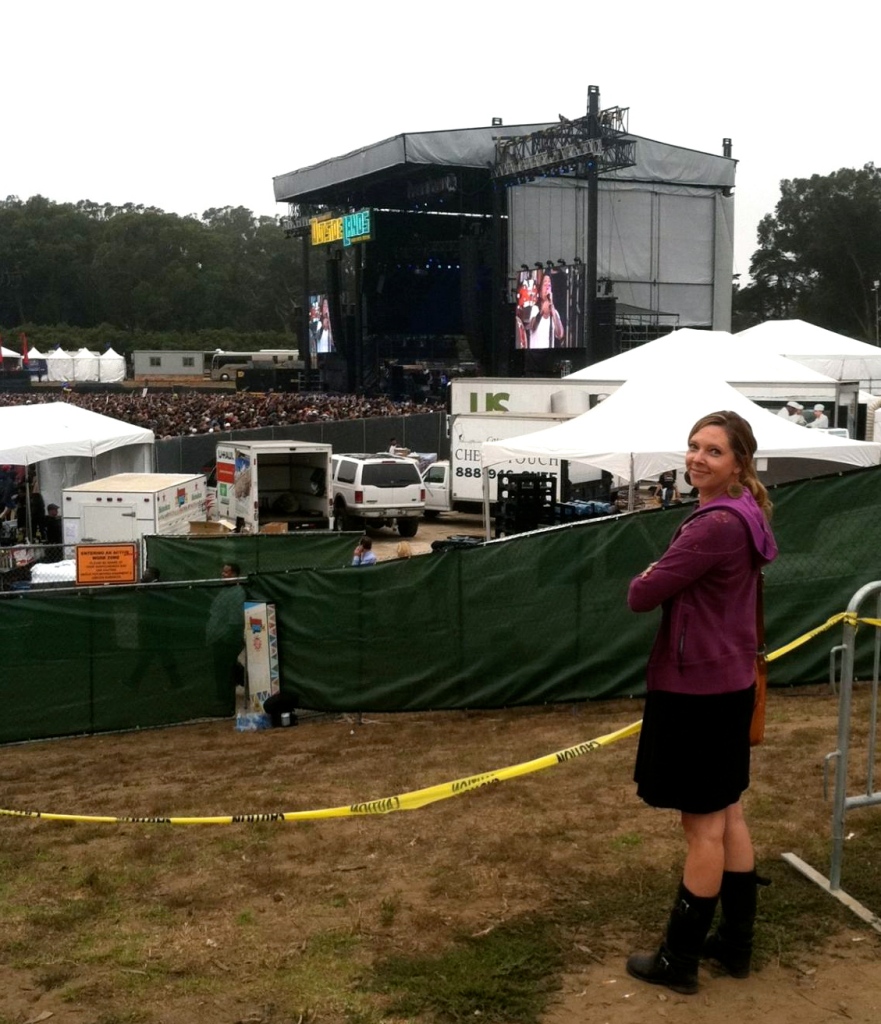 I’m not sure I can adequately describe the feeling of being such a big fan of a musician and finally getting to see him play live. When it comes to my desire to see a live show, there’s not another band or living musician that comes close. Just before the show started, I had a moment of clarity that an unforgettable moment in my life was about to happen.

And then Neil Young walked onto the stage. 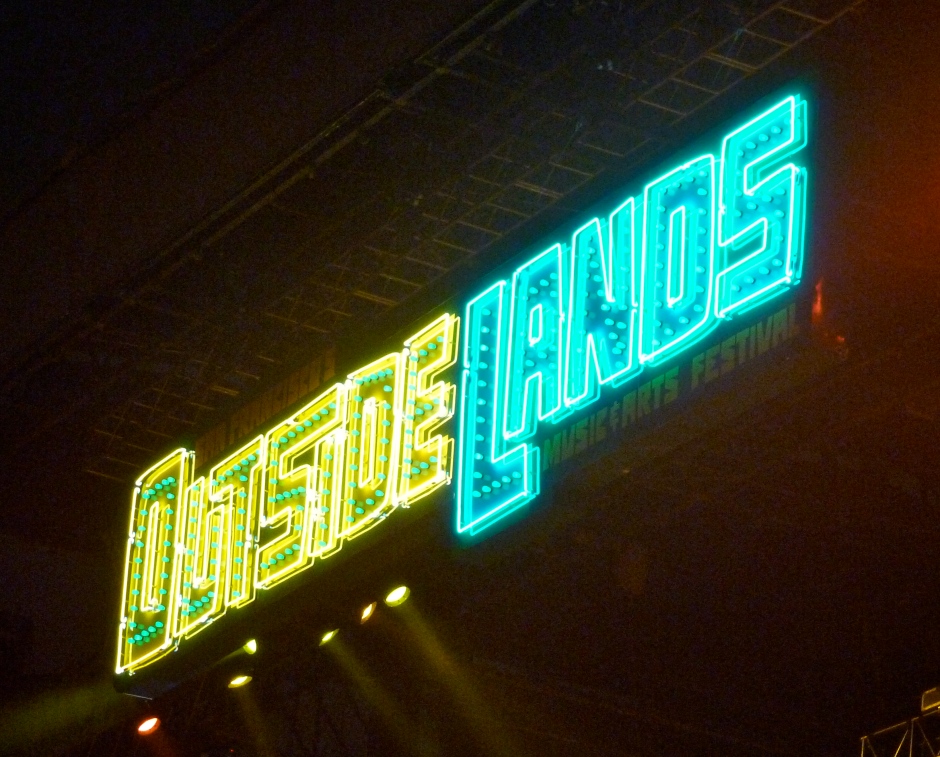 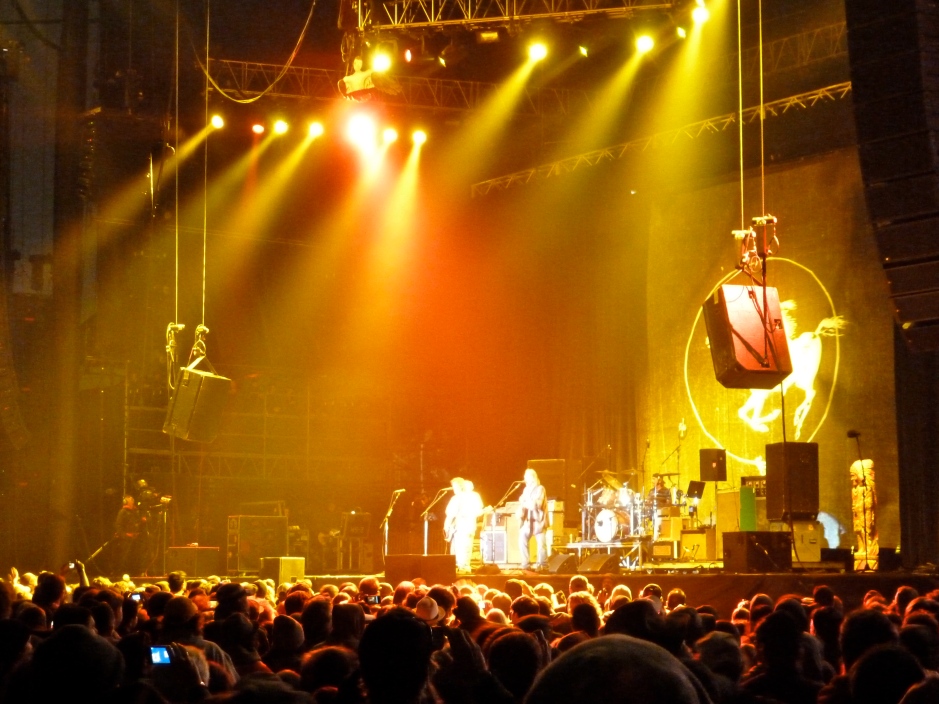 I hoped for some of the classics that made me fall in love with Neil Young’s music years ago, and I got some: Powderfinger, Cinnamon Girl, Hey Hey My My. At one point, he walked out onto a dark stage, just a man and his beat up acoustic guitar, and played The Needle and the Damage Done, alone in a spotlight (click- video from YouTube). For a Neil Young fan, it doesn’t get much better.

The shot is blurry, but my adoration is clear.

If I loved him before, I’m a goner now.

I’d love to hear about your favorite live music moment…

And that’s not even the end of our California Road Trip Adventure! Stay tuned!