We made such a yummy meal on Wednesday night- I don’t even know where to begin.

After a successful haul at the Park City Farmers Market, John and I tag-teamed an incredible meal with the yummy stuff we brought home with us. We dined on Grilled Wild King Salmon with Avocado and Arugula Pesto, served with toasted almond cous cous and a farm-fresh salad. Oh, with mint limeade to sip.

Since it is my new favorite drink and also involves using my glorious new juicer, I think we should probably start there!

During our wanderings around the market on Wednesday, I spotted this sign.

Considering my serious summertime fling with this homemade lemonade recipe, I had to taste this citrus refreshment, too. There was a string of people anxiously waiting for a glass of limeade. Clearly, these guys had something good going on. From my view at the back of the line, I could glimpse a woman wearing green, slicing limes in half. Occasionally, the couple would shake jars of juice like maracas, smiling away. As I got closer, their process became more clear.

When you look at the table in front of her, do you feel like you’re having de ja vu? Because I did. Flashback to the multiple days I’ve spent with a big pile of lemons in front of me, slicing and squeezing, slicing and squeezing. The contraption she was using was interesting and old fashioned. It looked far more efficient than my hand-squeezer. But I thought to myself, “She could really use my juicer.”

It was time-consuming for the couple to make a big glass of this minty limeade. The juicing, the measuring. There was a concoction of some kind that was scooped into big mason jars along with the lime juice. A little scoop of sugar, some fresh mint, and the lid went on. They would shake, shake, shake away, allowing the sugar to dissolve and the mint to get tossed around within the mixture. It looked like fun, and the couple was clearly enjoying their day.

I took one long, refreshing sip and said to myself, “I need to make this.” So I did.

All summer, I’ve been making a simple syrup of honey, ginger, and rosemary for my lemonade. I figured I’d swap out the lemons for the limes, and make a syrup using mint. I opted for organic sugar instead of honey, simply because that’s what they used at the booth. There couldn’t be many more ingredients than that, except maybe love- and I always put that into my food! 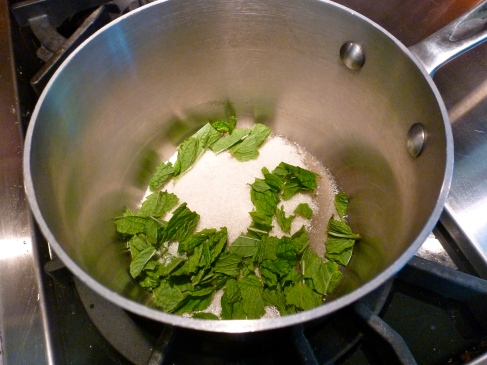 The mint steeping in the sugar water, I giggled like a schoolgirl as I brought out my latest love- the juicer. Juicing limes was a little more challenging than lemons, maybe because they are smaller. But it didn’t take long to have lots of spent lime halves and plenty of juice. 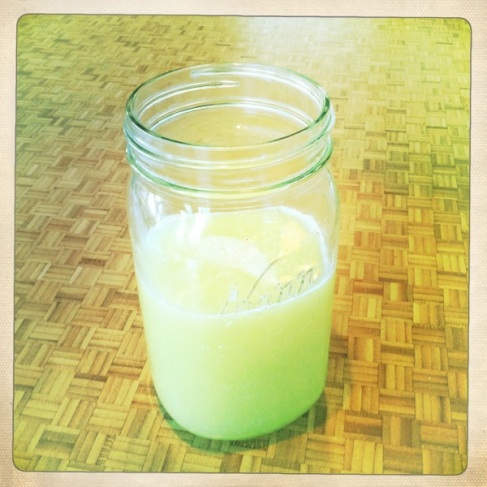 I set aside the lime juice while the mint syrup cooled and started in on a recipe I’d never made- arugula pesto. John had picked up some beautiful pieces of salmon at the farmers market, and we’d also brought home a bag of spicy arugula and basil. I remembered a pasta dish on a Giada show with arugula pesto, and it sounded like an interesting, summery sauce to accompany the grilled fish. Plus, from what I could see, a food processor was going to do most of the work for me. Bonus! 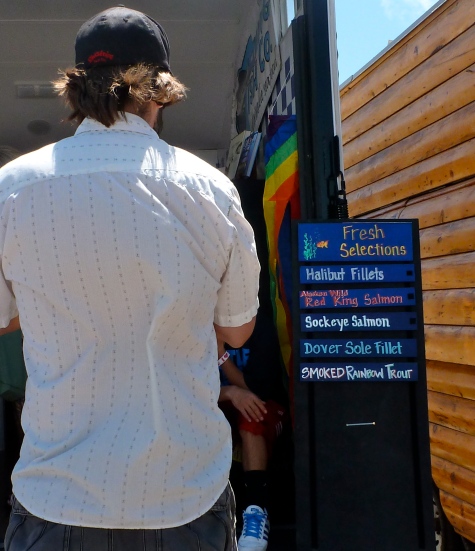 The recipe called for avocado, basil, garlic, and lime juice to be blended in the food processor. As luck would have it, my pretty little juicer was already warmed up.

Next into the processor was a whole lot of arugula. I love arugula, and the bag we got from a local farm was so much spicier than what I get at the store. Some salt, pepper, and crushed red pepper joined the party.

While I happily played with my plug-in appliances, John got started on the salmon. The color of the fish was incredible! When I asked why he kept the skin on during grilling, he said that it helps keep the fish together on the grill. His grill marks are perfection. 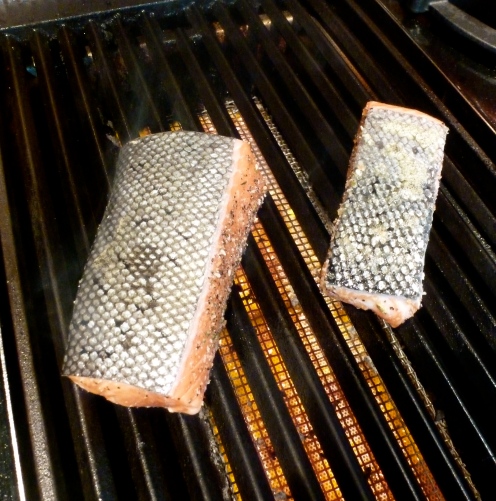 A salad of fresh greens and veggies along with a tasty boxed toasted almond cous cous rounded out our colorful meal. I spooned some of the avocado-arugula pesto onto the plate and John laid the fish on top. Beautiful!

The salmon was SO good, all by itself. The pesto was less pesto-y and was almost similar to a guacamole, with the lime and avocado. I’m not sure how good it would be on pasta, as the original recipe recommended. But it was really good with fish. It was also good the next day as a spread on a sandwich, and would be awesome as a dip for chips or a quesadilla!

Oh, and the minty limeade? SCRUMPTIOUS. The juicer strikes again!

During our last few alcohol-free days (only 5 days to go, and yes, I’m counting), we have TWO summery beverages to enjoy. The limeade made me think mint or other herbs would be fun to experiment with in the lemonade, too. Basil? Thyme? Stay tuned!

Thank you, local farmers, for contributing to our feast!

Check back later for all sorts of fun blog-related stuff!