I didn’t grow up in a hippie house. My parents were born too early for the “peace and love” movement. My dad’s soft spot is Frank Sinatra jazz and my mom came of age with Elvis. As a child born in the mid-70s, my musical awareness began during the bubblegum pop of the 80s. I made up impressively bad dance moves to songs by Wham! and Bananarama and the Go-Gos. In high school, I got into new wave and electronica, and knew every Depeche Mode song by heart. Before graduation, I’d discovered the grunge movement; flannel-wearing long-haired boys and loud guitars made my teenage heart go pitter-patter. I wore out Pearl Jam’s Ten, playing the cassette tape over and over until my Walkman ran out of batteries. I wore one of my dad’s old flannel shirts over my cheerleading uniform. My crush wasn’t one of the studly clean-cut athletes- it was the blonde surfer with an attitude and shoulder length hair who brought his guitar to school.

By the time I started college in Colorado, I’d implemented my own personal 70s revival. I drove a ’71 VW Beetle. I wore bellbottoms and clogs. I twisted bits of my hair into braids and tucked wildflowers behind my ear. I finally heard music by an apparently well-known band from back in the ‘60s by the name of the Grateful Dead, but it didn’t click with me. Despite my love for live music, I even declined an invitation to join a group of friends on a trek to see the band play in the early 90s; instead, I house-sat for yet another long-haired crush and listened to the animated stories about the concert upon his return. I remember turning on the radio in 1995 and wondering why there was so much Grateful Dead being played. It was August 9. Jerry Garcia had died of a heart attack and a tie-dyed nation was in mourning.

Over the years, I heard and enjoyed lots of Dead songs. The east coasters-turned-mountain men I dated often played warbling old bootlegged concert recordings (“Europe ’72! Sweet!”). The unmistakable sound of Jerry’s guitar accompanied every picnic, day on the boat, late night party, and road trip of my twenties. I simply love music, and in the right mood, can twirl in a sundress or hula-hoop with the best of them. The band, famous for their devoted followers and non-stop touring over 30 years, stopped playing without their 9-fingered leader. I wished I’d joined the group that traveled to see the Dead play live; it would have been quite an experience, and I’d missed my chance.

That was twenty years ago. I heard about a 2015 summertime reunion of the four remaining members of the Grateful Dead to commemorate their 50th anniversary; three shows in Chicago over Fourth of July weekend would be the last time the group played as a band. When the tickets sold out almost instantly, the band opened up two more shows in Santa Clara, California. I didn’t know that John had put his name in on the ticket lottery until he forwarded me the email notification that he’d gotten tickets to both shows in California. It looked like I’d get to see the Dead play live after all, though without Jerry.

The weekend of the shows coincided with John’s college reunion, and it was indeed a reunion of sorts in Santa Clara. A group of us shared a rental house in Menlo Park, near Levi’s Stadium. The house was spacious with lovely gardens and a little cottage tucked in the back. Over the course of the weekend, we had between 10-15 people there (including two 4-year olds and a teeny baby). A couple of friends even camped out on the patio furniture. Sharing a house meant big family-style breakfasts, a never-ending supply of pizza, and lots of time to relax and laugh together between the concerts. 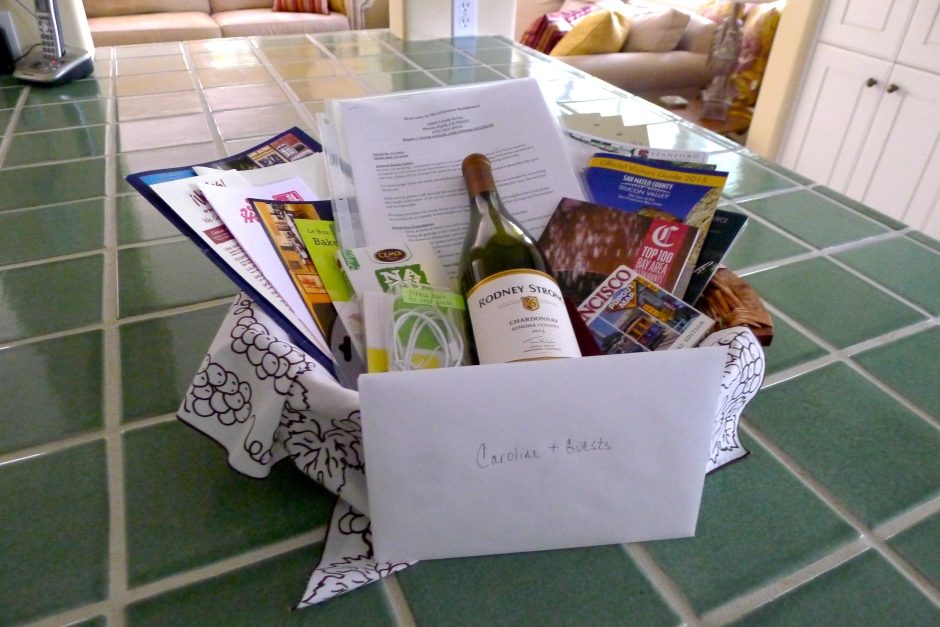 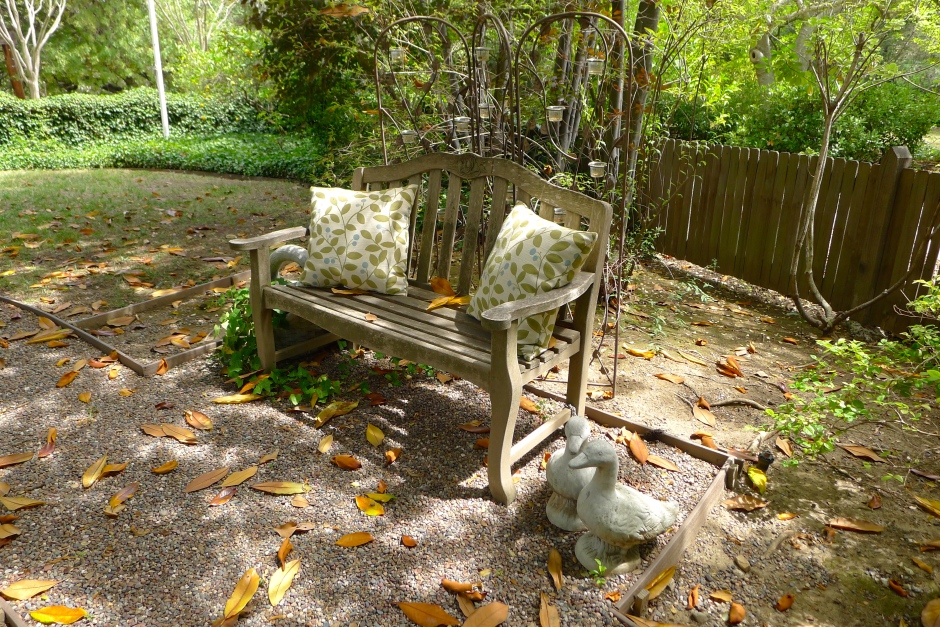 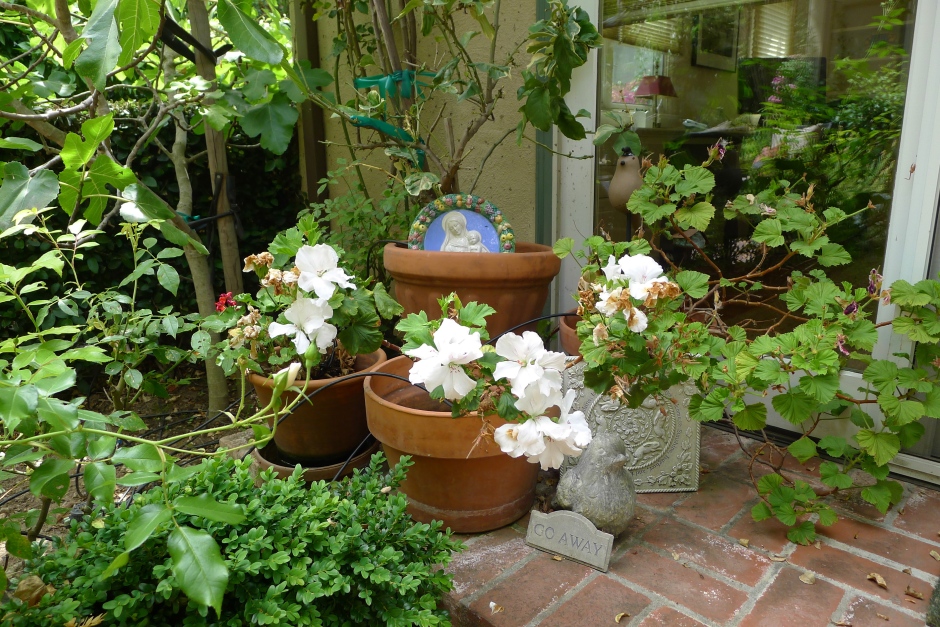 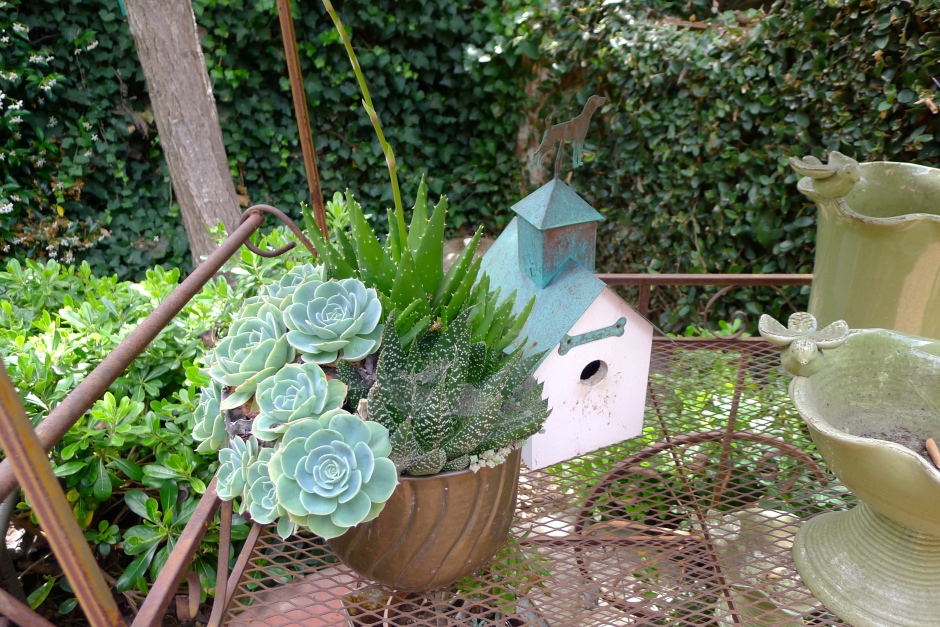 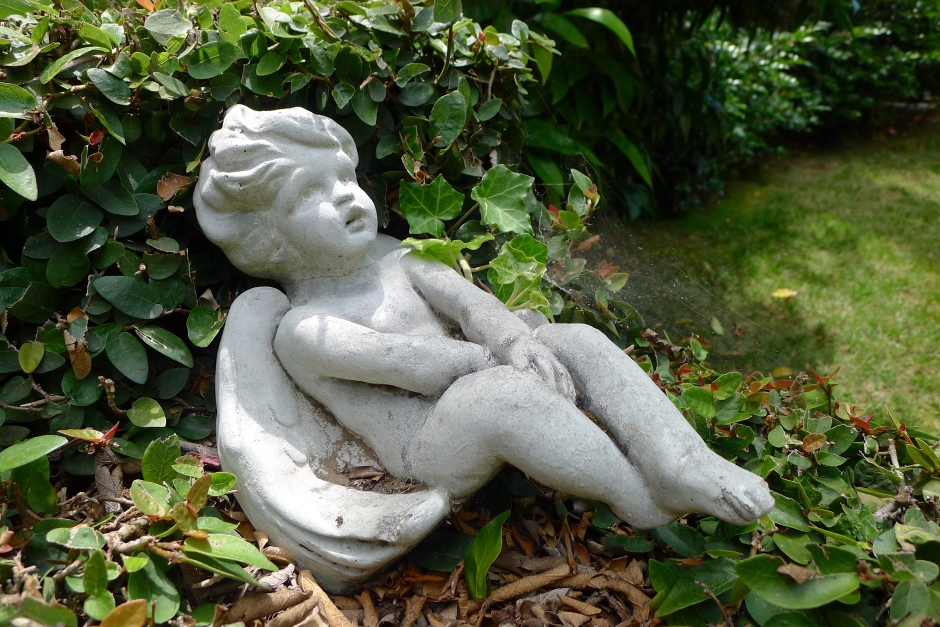 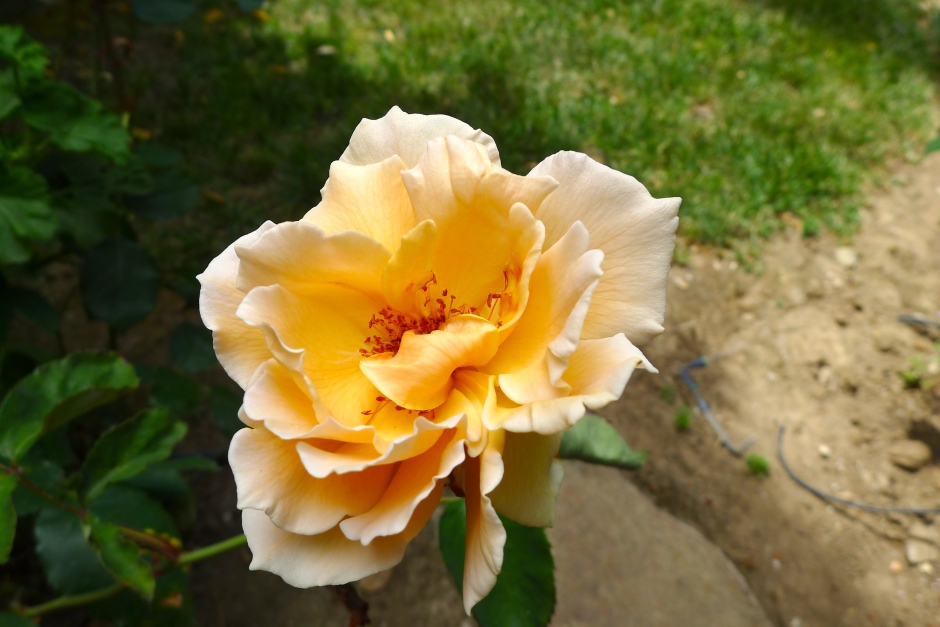 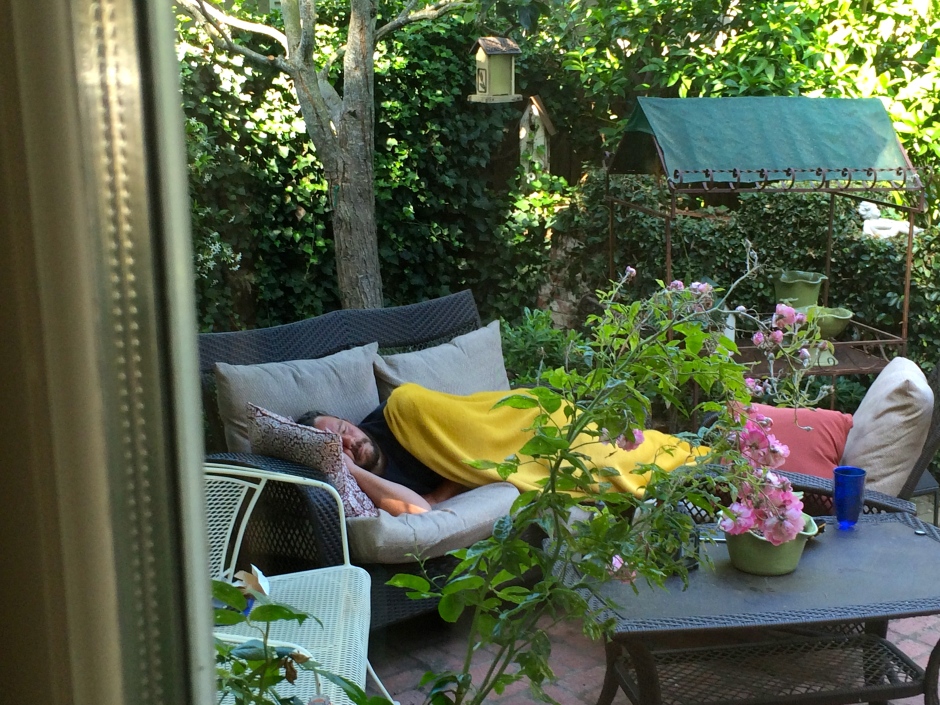 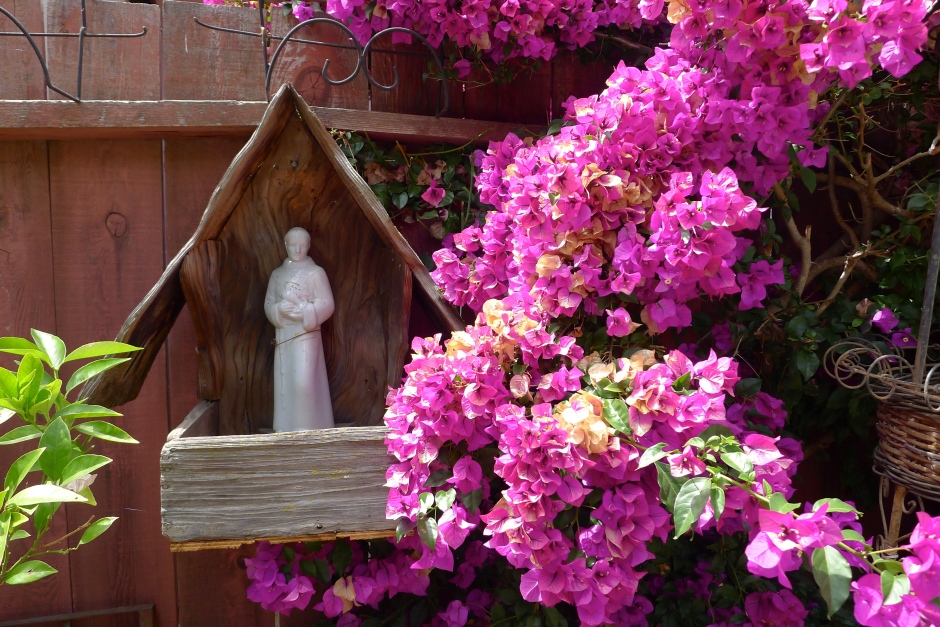 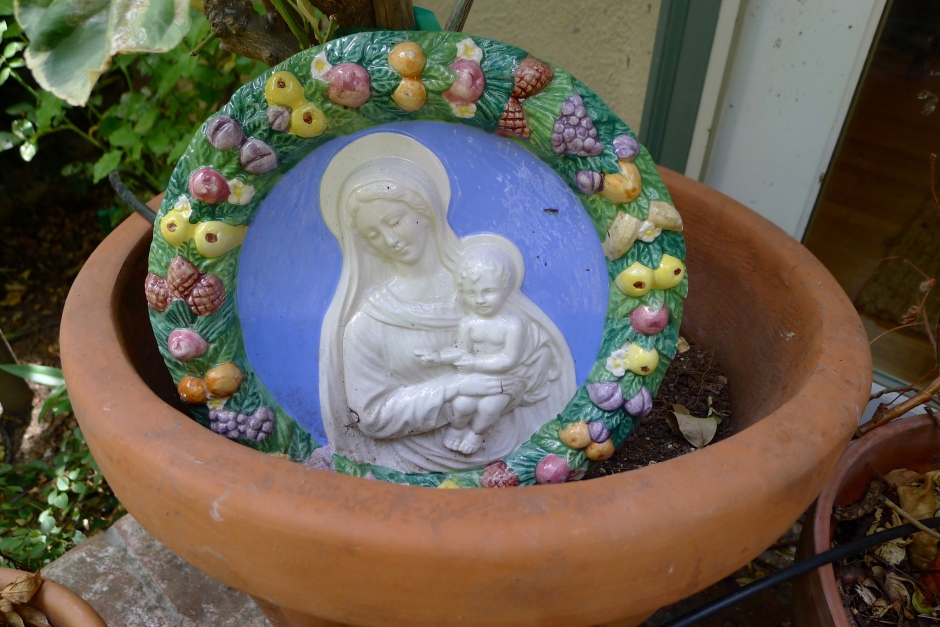 We arrived later than intended for the first show, not anticipating the traffic situation. We bailed on our purchased parking lot pass and instead paid $40 to park closer to the stadium. We joined throngs of music-goers streaming from all directions toward the stadium. I really had no idea what to expect of the people or the scene or the show; I just gripped John’s hand and took it all in. Every Deadhead cliché was represented: dreadlocks, tie-dye, women with glitter on their faces and braids in their hair, men with ponytails longer than mine. There were people of all ages- some who definitely saw the Dead in the late 60s and some who were certainly not even born yet when Jerry died. (Two-month old Allegra joined our crew!) There were young kids camped out in the parking lot begging for money for a marriage license. There were baby boomers with wild eyes talking gibberish. There were dogs everywhere. Some of the scene made me sad, so I focused on the happy people that were excitedly speculating what songs the band would play tonight. The energy before we entered the stadium wasn’t peaceful; in fact, I wasn’t sure I could handle two nights of mayhem if this is what it was going to be like.

After some confusion about what size bags were allowed in the stadium and a long line to get searched and pushed through a metal detector, the whole vibe relaxed a bit. A child handed me a red rose. The band was tuning up on stage. Out of nowhere, I spotted my friend Krista- a small miracle considering the size of the crowd. After peeking in at the stage, our group separated to different areas of the stadium to find individual seats. Ours were located through some sort of club, requiring a ticket check to get into but revealing nicer bathrooms and no lines for food/drinks. We had a partial view of the stage but it was a fantastic spot to see what 70, 000 people really looks like. Puffs of smoke wafted up from the crowd regularly. The floor scene, with no seats, was one big dance party. The music sounded good, familiar voices and songs with the crowd singing along to every word. Trey Anastasio from the band Phish stepped into Jerry Garcia’s spot and seemed respectful of his place in the band. 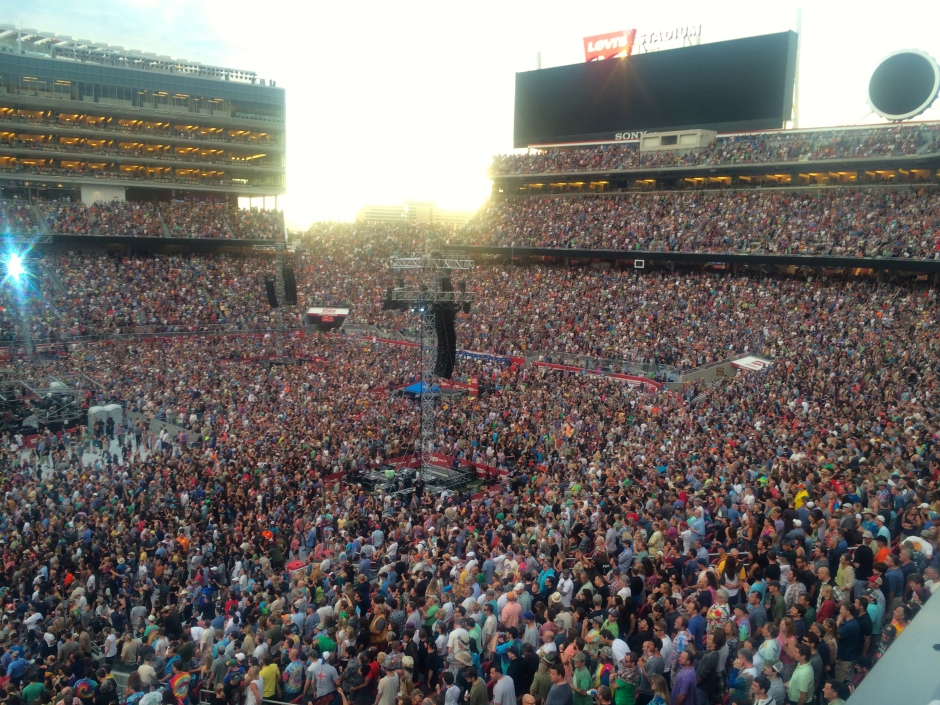 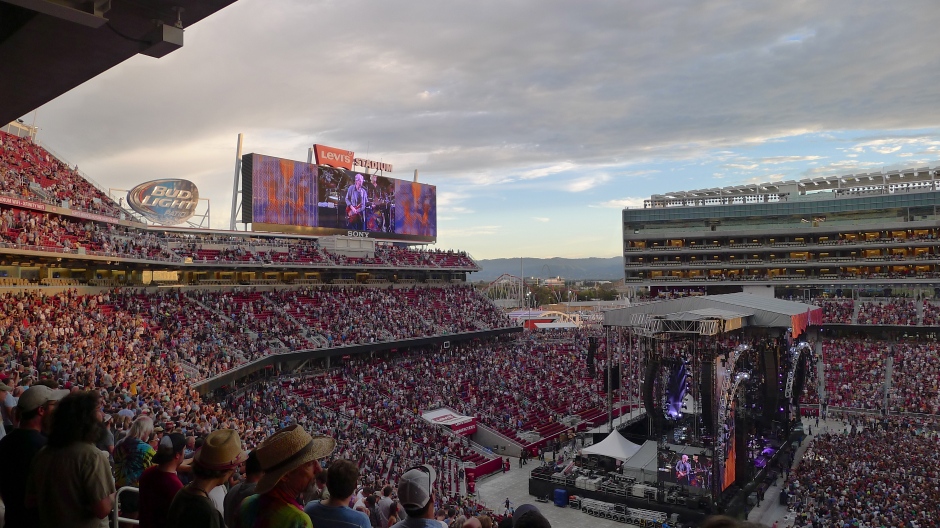 As the sun started to set, John and I took a long walk around the outer circle of the stadium, enjoying possibly the best people-watching ever and seeing the sky change color with the music all around us. Suddenly, we spotted a full rainbow in the pink sky. It was gorgeous. 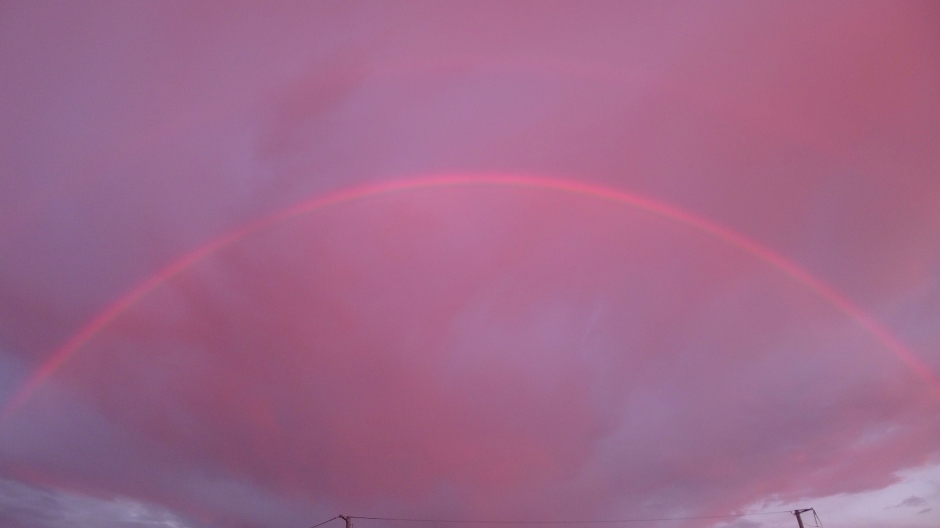 We found our friends at some seats in the lower bowl and watched part of the show there. We even enjoyed a fireworks show above the stage before heading to the top level to watch the end of the concert. People danced in the hallways, including our friend and baby Allegra who slept peacefully in her sling the entire night. As the band finished an extended version of their famous song, Casey Jones, for the encore, the stage lights revealed a stadium full of people singing along to the very last note. They’d played for almost 5 hours, and despite being tired, I’d enjoyed the whole experience. We joined the river of people leaving the stadium like cows in a cattle drive. I snuck off to bed as soon as we got to the house (while the crew kept the party going to the wee hours). 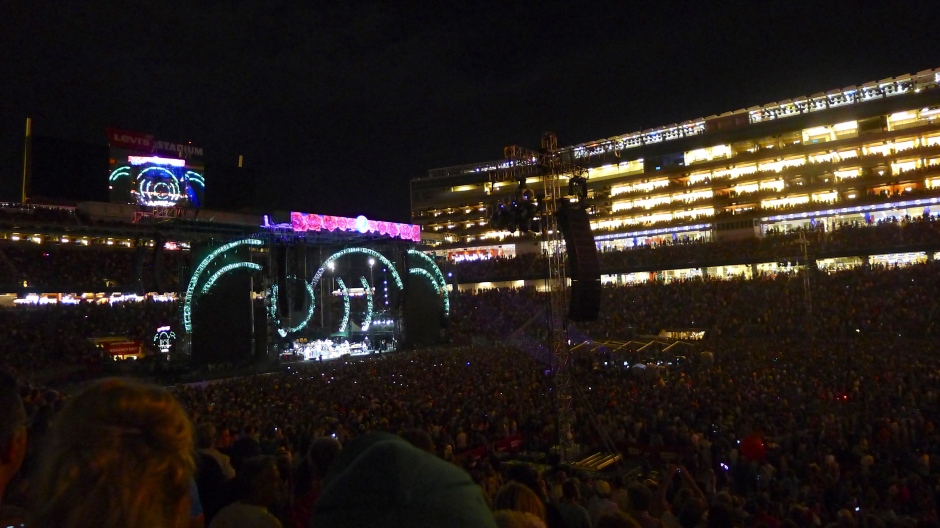 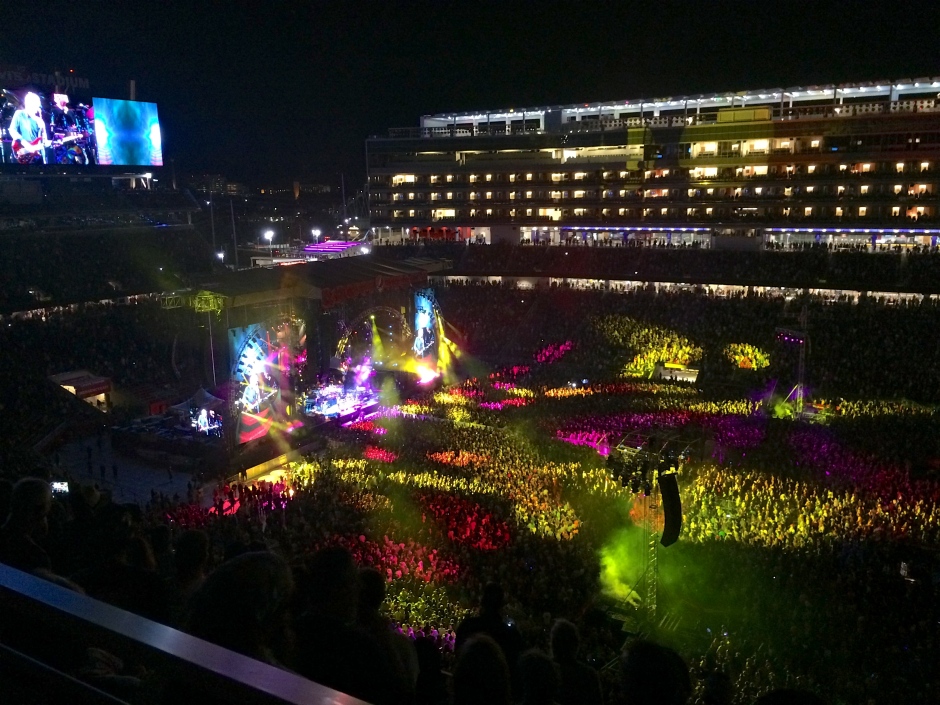 By the next night, I knew what to expect. The whole entry experience was better because we arrived earlier- we even had time for drinks in the lot. Our seats were better, lower and with a good view of the stage. Instead of hopping around all evening to different groups of folks, we stayed in our comfort zone, aside from a fun hour or so up at the very top of the stadium. Our friend’s lone seat was the very highest one. The view from up there was incredible- you could see the entire stadium. I peeked over the edge and, a few stories down, watched hippie girls spin and spin and spin from above. When the sun set and the wind up there got chilly, we went back to our seats to finish the show. The encore, “Brokedown Palace,” evoked tears from most of the people around us. The four remaining members of the Grateful Dead linked arms with Jerry’s stand-in, Trey, and bowed to the crowd. It doesn’t matter if you like the band or not: a stadium full of people, cheering in gratitude from their hearts, is powerful. Two shows down- three to go. 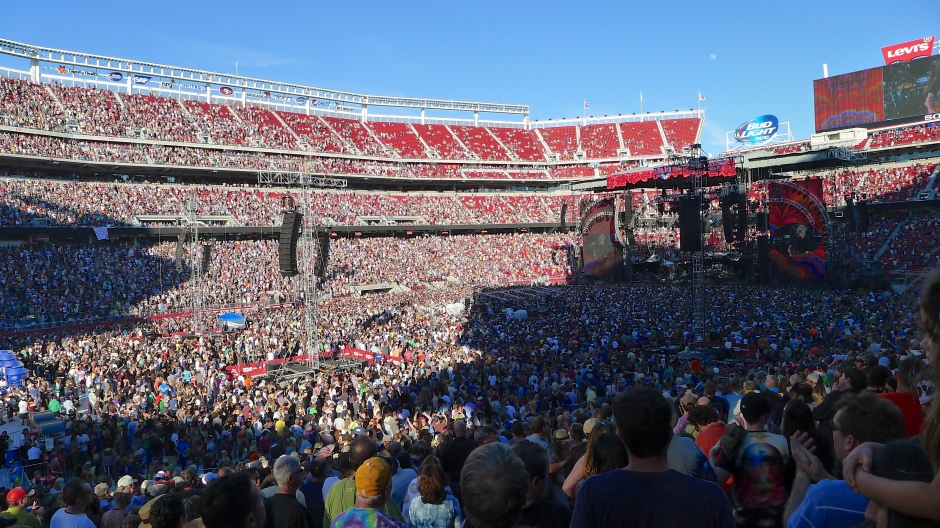 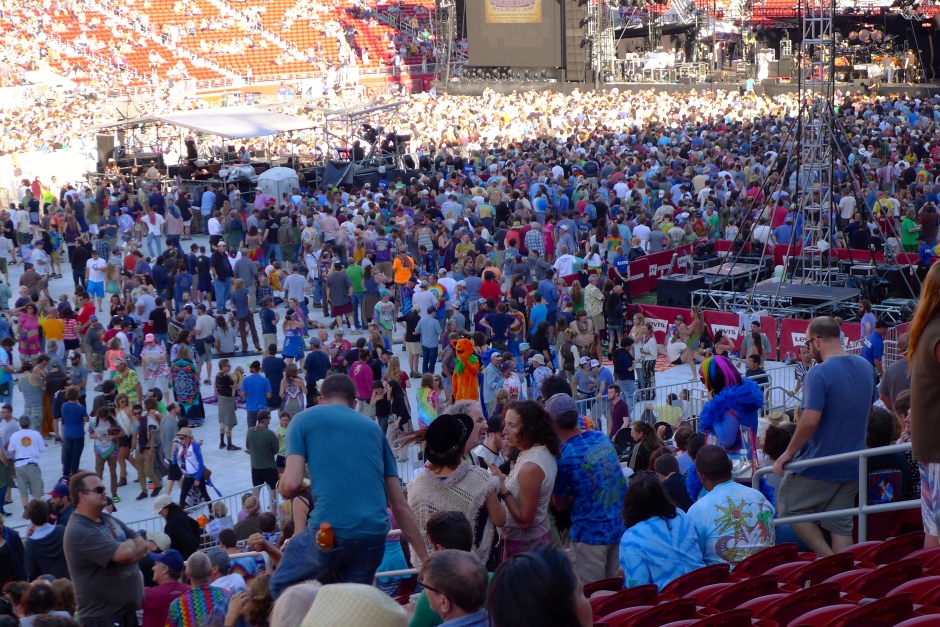 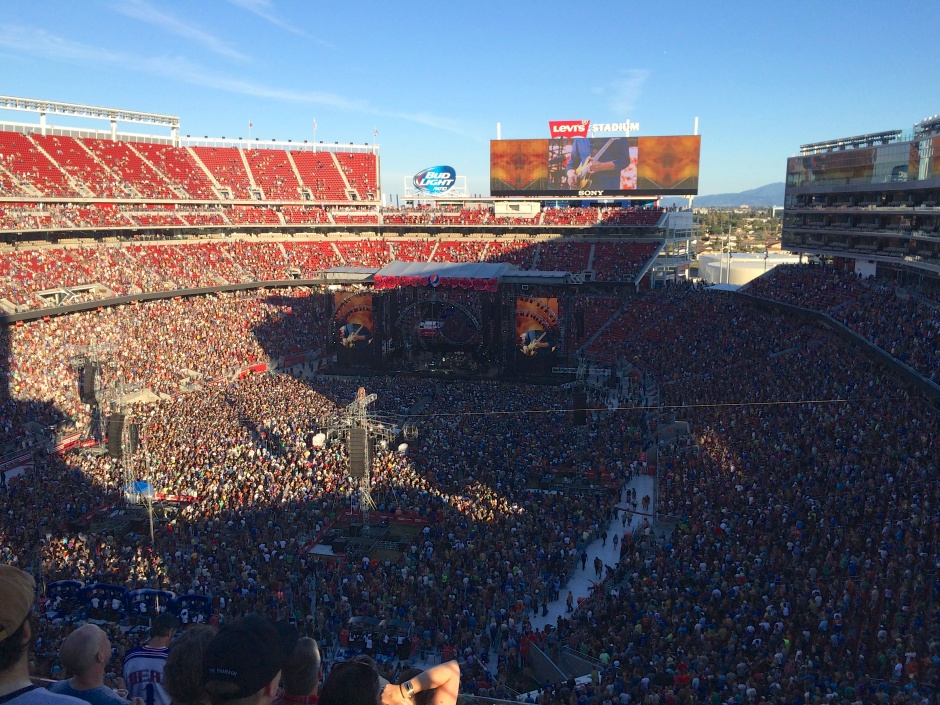 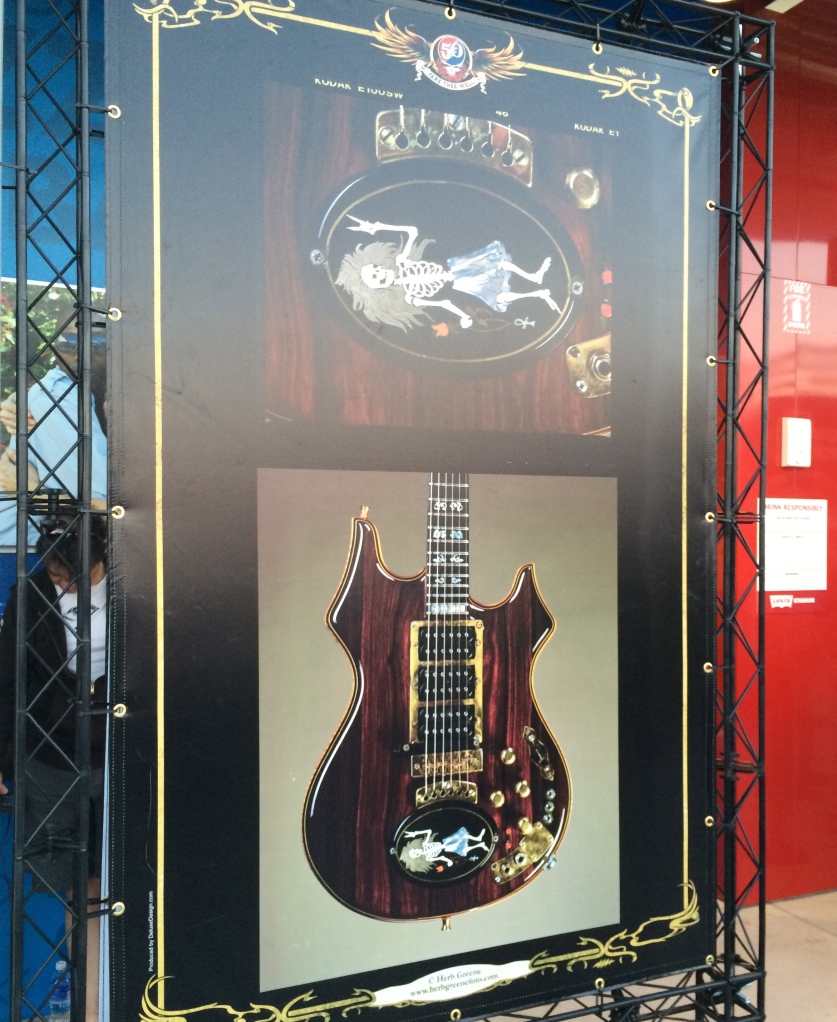 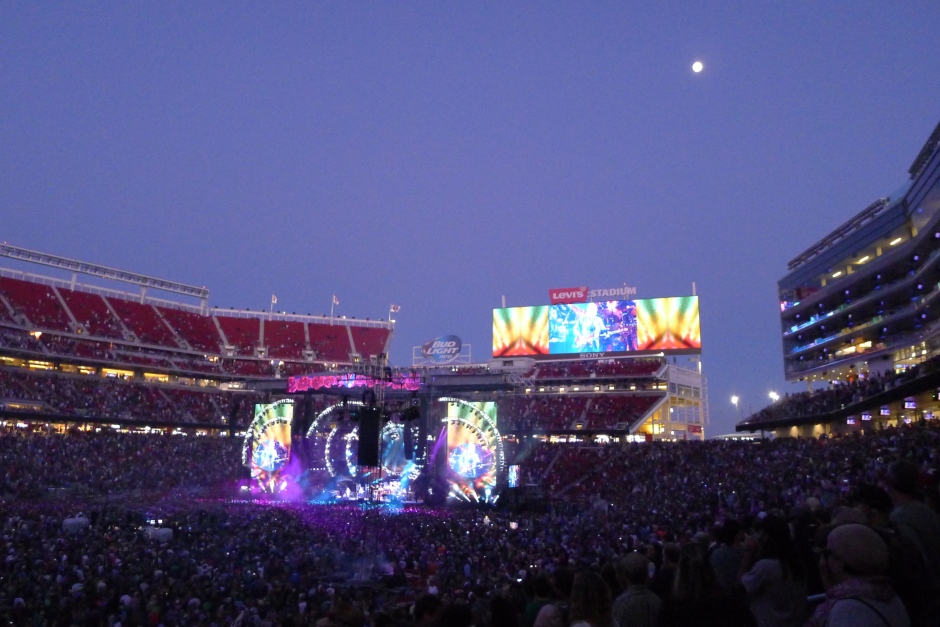 We left for home the next day. Multiple people at the terminal wore brand-new tie-dye shirts. I heard Jerry’s unmistakable guitar riffs from behind John’s headphones on the plane. I thought about the experience, what it was like to be a non-Deadhead at two significant and historic shows. Part of it was what I’d expected- the clichés I mentioned. What I didn’t expect was the feeling of community; while 70,000 people attended the show for 70,000 different reasons, they were there as a family. I was particularly moved by the older crowd. They weren’t there because it was the cool thing to do. Something about the music spoke to them, years ago, and it was fascinating to see how it still affected them now. Aside from a few misfits who clearly didn’t belong, everyone was happy. Friendly. Laughing. Swaying next to a stranger and singing familiar songs. It was different than any other concert I’ve been to. It’s rare to see that many people in the same place, all in a good mood. It was contagious, even for someone who only knew half of the songs that were played. I even felt a pang of sadness not to be heading to Chicago for the last three shows. There’s a line in the song “He’s Gone” that goes, “Nothing left to do but smile, smile, smile.”

And for two nights straight, I did.

Check out more of our traveling adventures HERE.