That’s what I am today.

Get plenty of rest! Those words of wisdom have been ringing in my ears this week. Not that it’s been hard to do- my energy level is as low as the temperature here in Park City. I’ve been lying around, dozing in and out of strange feverish dreams, sipping tea with honey to soothe my scratchy throat. I’ve watched lots of movies. (Have you seen Serious Moonlight? So weird.) On Day Three, despite my aches, I was restless. I had to do something… so I made soup.

SOUP. It’s so comforting- the ideal meal for a sickie like me. I peeled through my recipe book (geez, this thing needs organizing) and landed on a page with three different white bean soup recipes. Hmmm. They all sounded good. White bean soup for the soul? Maybe- if it’s made with chicken stock. Somehow, in my foggy-headed state, I ambitiously took bits and pieces from each recipe and ended up with a tasty bowl of YUM.

There are a bunch of scrumptious fresh ingredients in this soup. When using lots of canned things, I think it’s important to balance it out with freshness. Looking at the lineup made me feel healthier already! (Please note John in the background peering at you with his new binoculars. Creepy? Adorable!)

Vibrant colors from onion, carrot, celery, and a bell pepper brightened up the kitchen. I started heating up a smidge of oil in my pretty green soup pot and tossed in a key ingredient: pancetta. Fancy bacon. And you know how I feel about bacon. 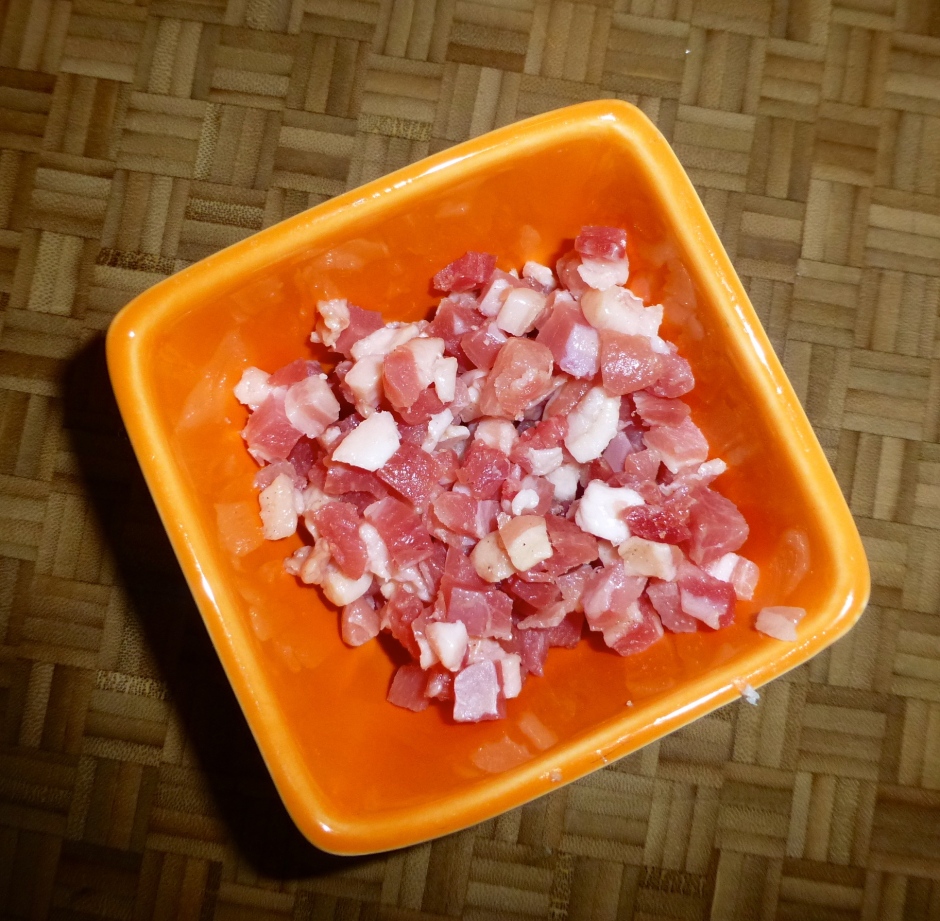 Once the pancetta had browned a bit, I removed it and set it aside for later. Into the pot went the rainbow of veggies, with a dash of salt and pepper. (Check out the cool salt and pepper container I got for John’s birthday!) 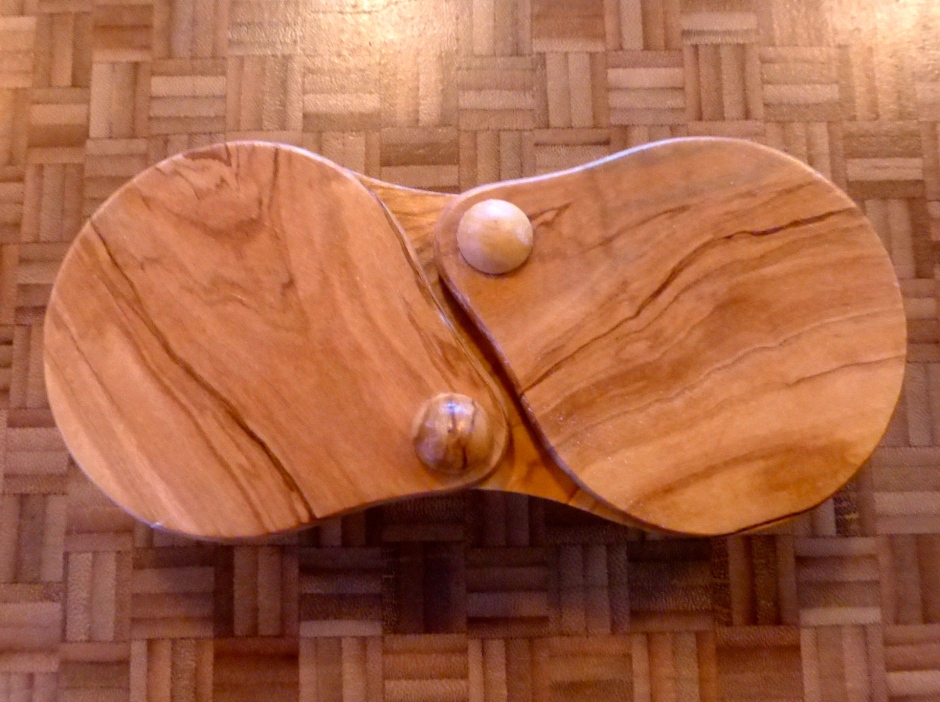 After a few minutes, I stirred in some chopped garlic, some crushed red pepper (I like heat!), and some chopped fresh rosemary. I let the veggies sauté away for awhile before adding a couple of cans of cannellini beans. They are creamy and buttery and delicious. 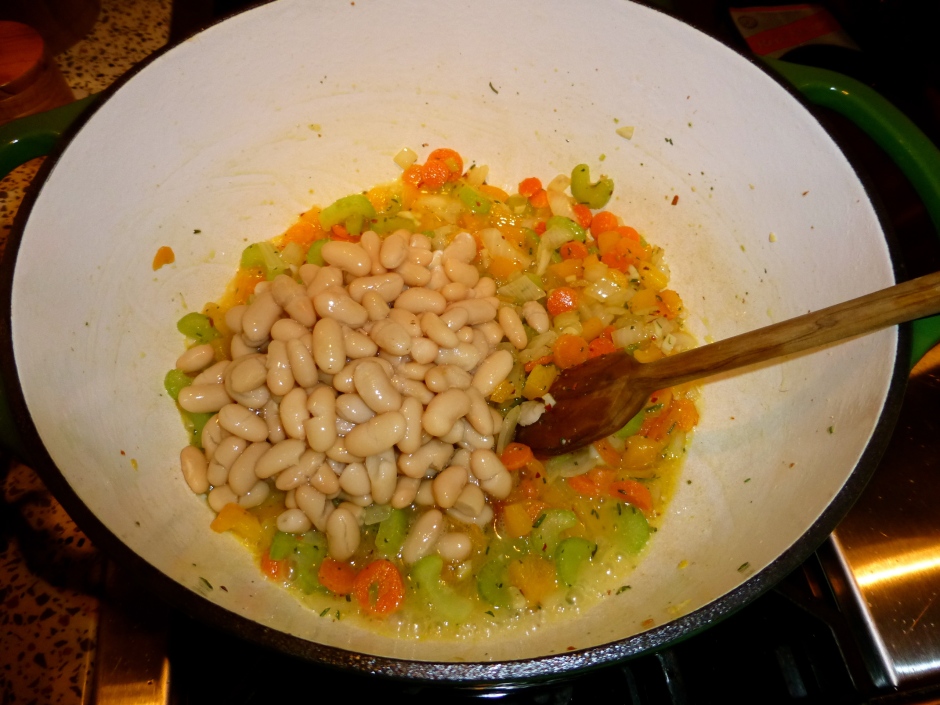 I poured in that magic, healing ingredient- chicken stock. Just enough to cover the beans and veggies. I also tossed in a couple of bay leaves for flavor and more red pepper. Feed a fever – something spicy!

The pancetta went back into the pot, along with some diced tomatoes (kind of drained). While that simmered away for a half hour or so, I grated some Parmesan cheese and rough-chopped a bunch of fresh spinach and Italian parsley. 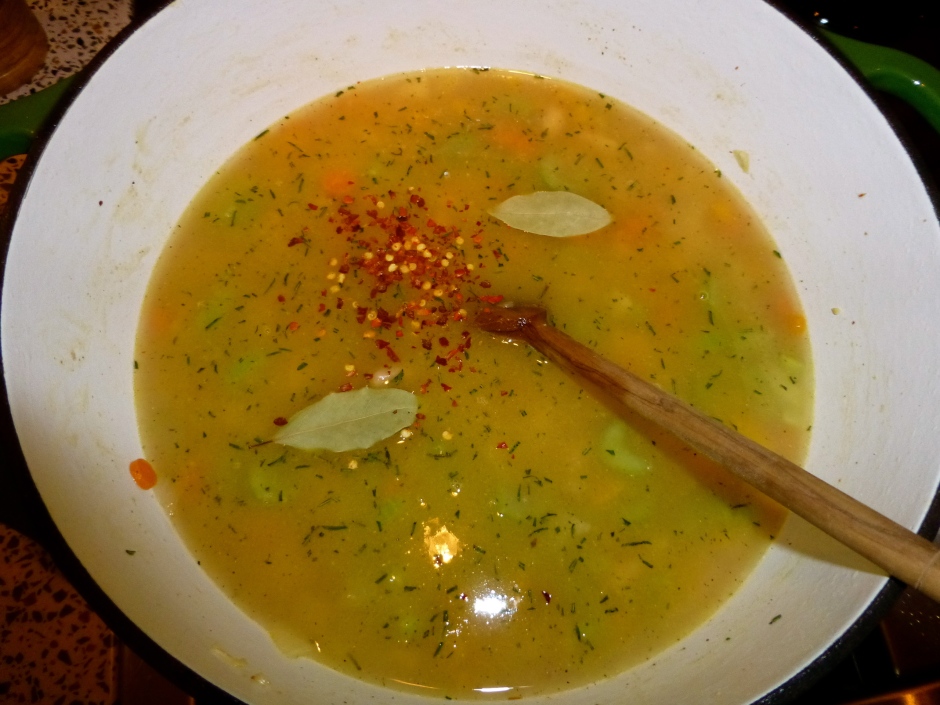 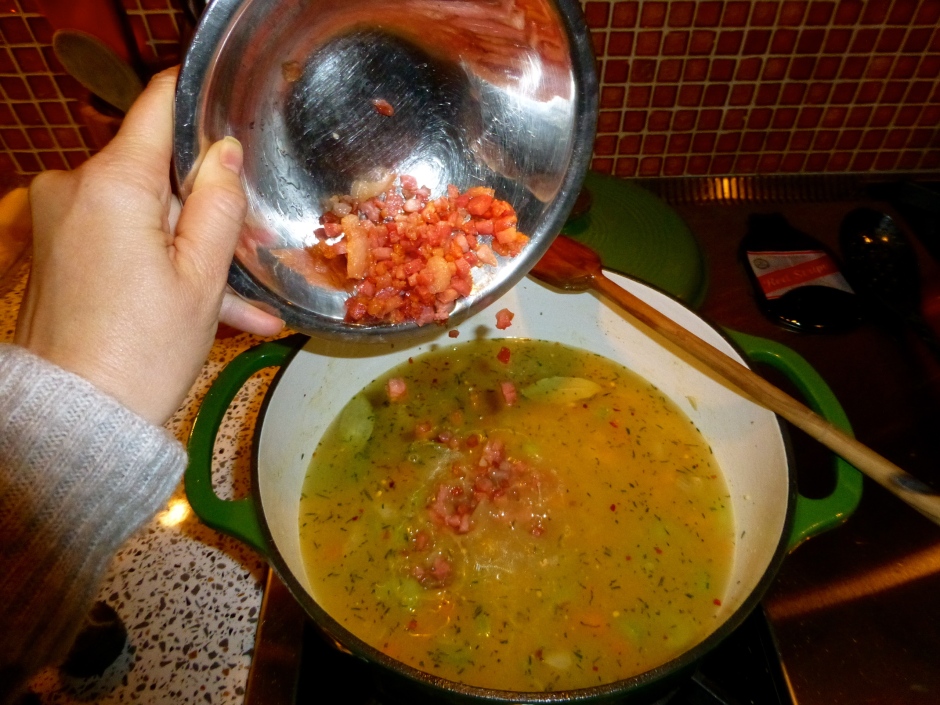 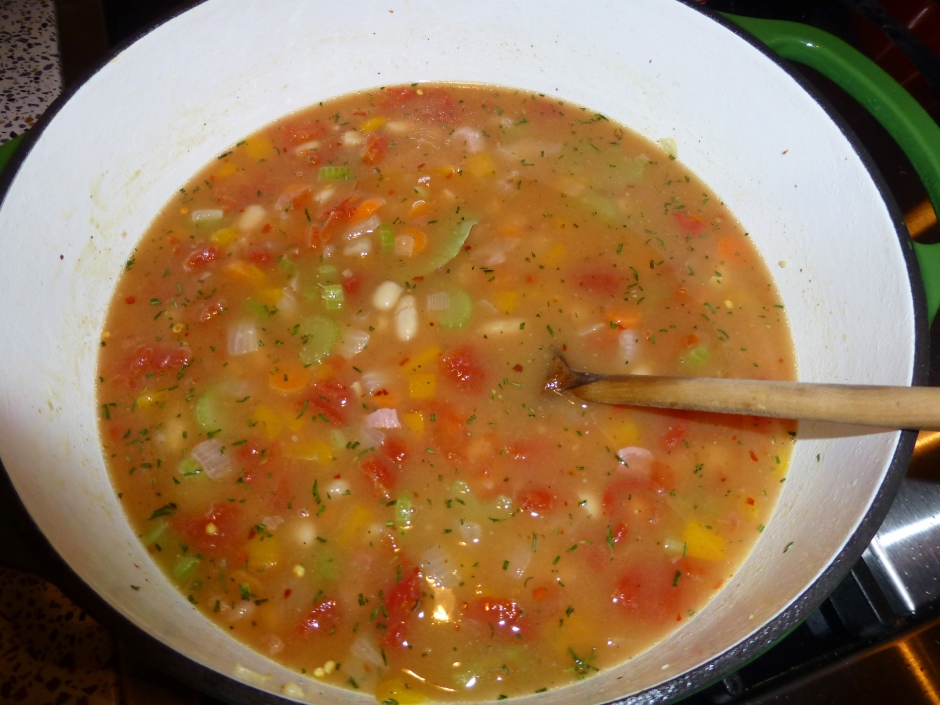 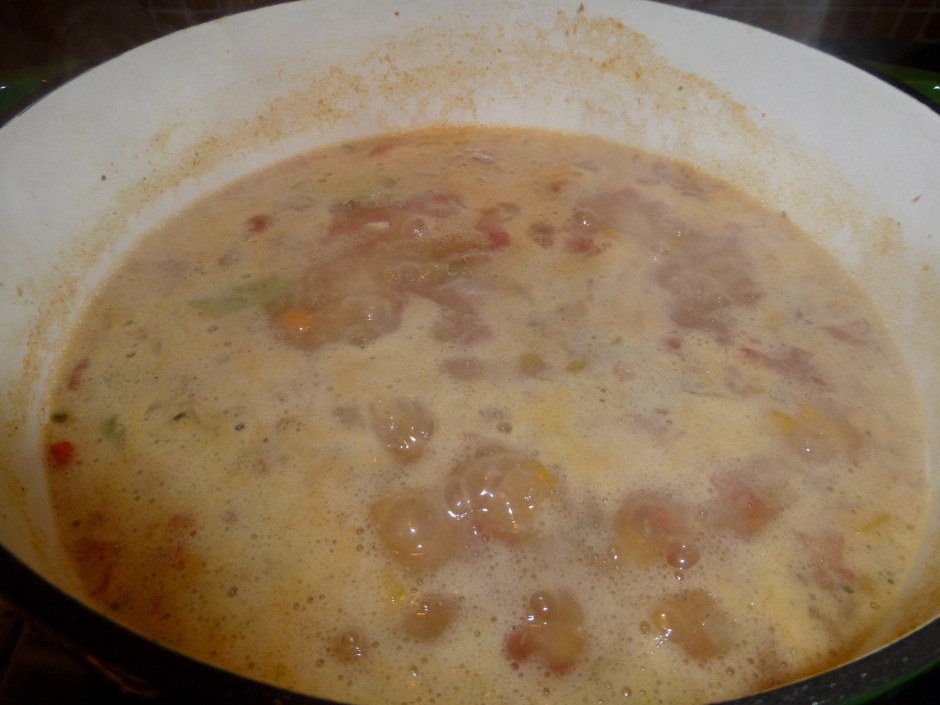 I like to put some cheese into the soup while it’s still cooking- I like the flavor it brings. I added the big pile of spinach and stirred it, watching the green leaves wilt into the yumminess.

When it was almost time to serve up the goods, I stirred in some sherry. It adds a little something that makes the soup richer. Some cheese on top, and a little sprinkle of parsley- chow time! 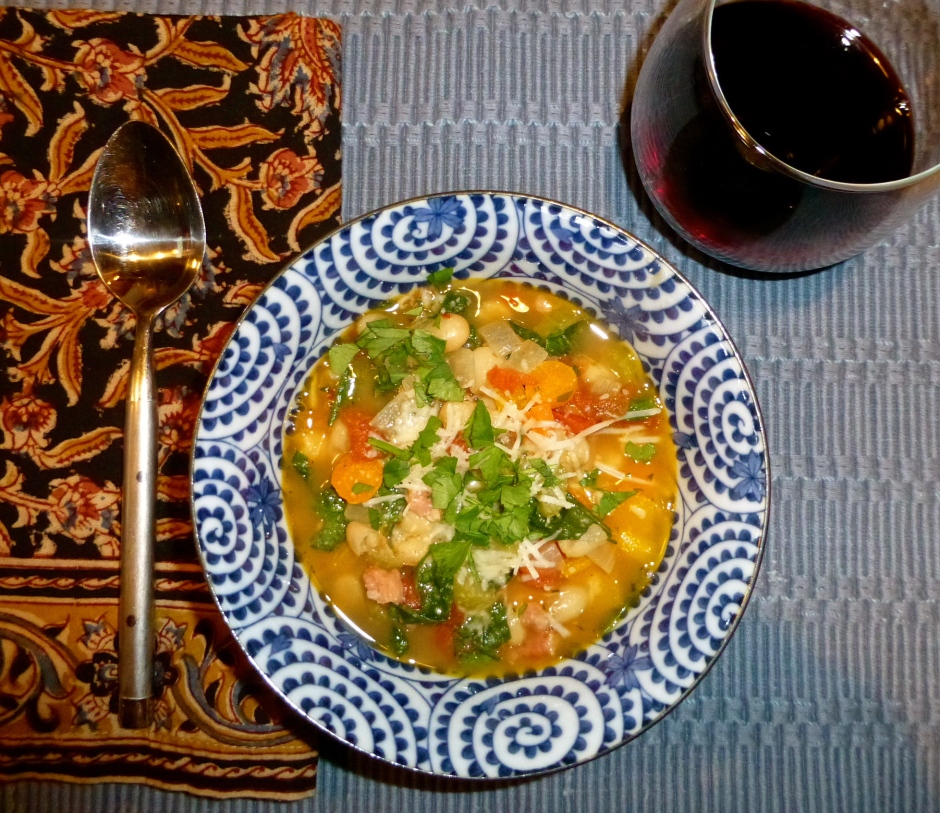 I served some toasted rosemary bread on the side, topped with Parmesan cheese. It didn’t hurt my throat after I dipped it in the tasty soup. I guess it’s not really a BEAN soup; there are beans in it, but plenty of other stuff going on. The rosemary flavor was subtle- and if you prefer (MOM), you could use thyme instead. Plain old un-fancy bacon would work instead of pancetta, or you could leave it out and use veggie broth for a no-meat version. I could have pureed the final product with my little hand-blender, but I like the chunky texture better.

The hot soup with the touch of spice was just the meal I was hoping for. I felt good enough for wine. 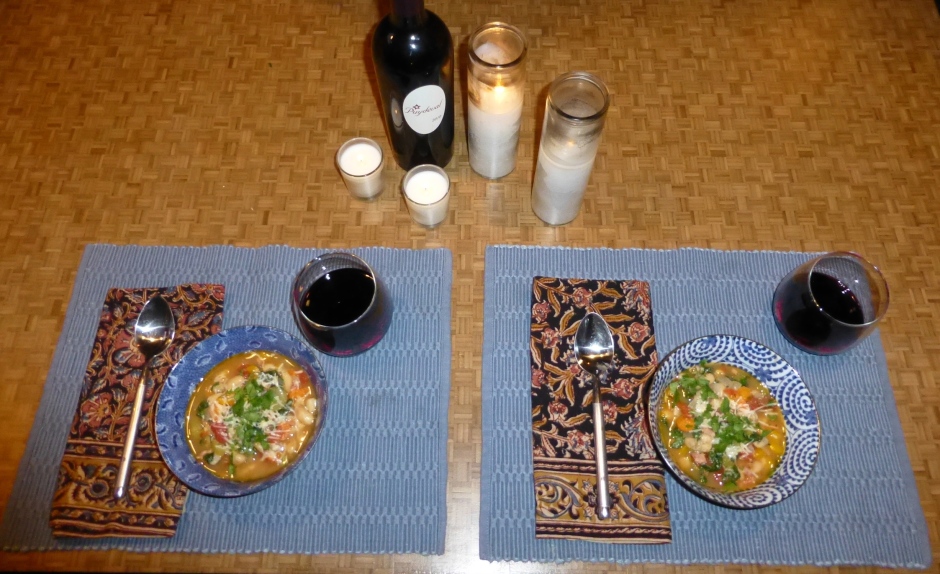 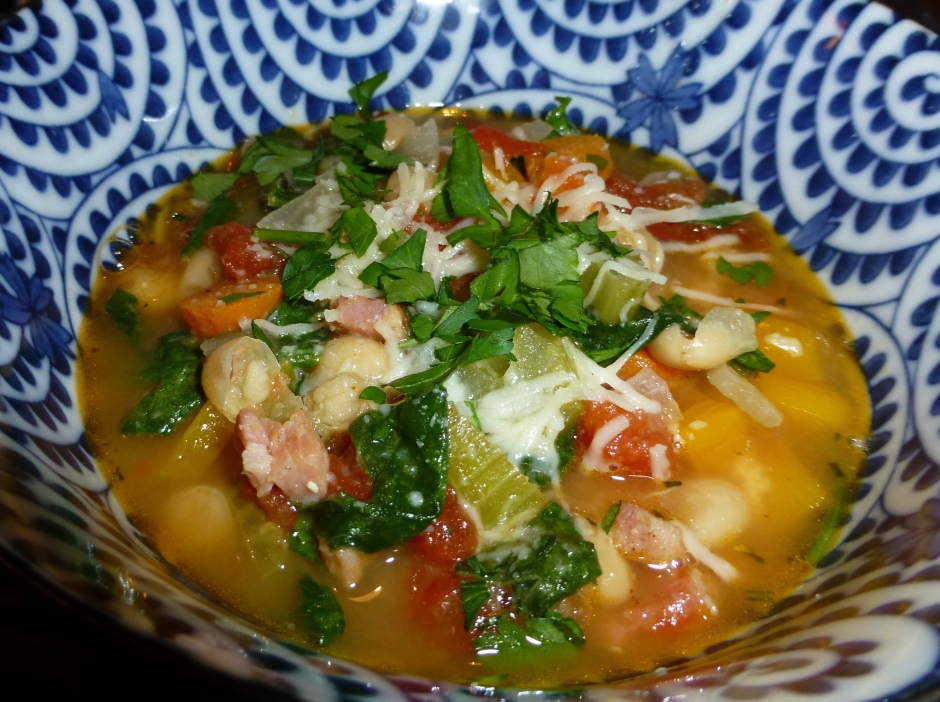 Cholula faked a cough to try to get a taste of the feel-better soup. Little sneak.

Heat oil in a soup pot over medium heat. Brown the pancetta and remove with a slotted spoon- set aside. Add the onion, bell pepper, celery, and carrot. Sauté for 5 minutes. Add the garlic, rosemary, and crushed red pepper. Sauté until the veggies are softened but retain some crunch. Add both cans of beans, chicken stock, and bay leaves. Add reserved pancetta and diced tomatoes. Bring to a boil and simmer for 30 minutes. Add most of the Parmesan cheese, half of the parsley, the sherry, and the spinach. Stir until spinach is wilted. To serve, top bowls of soup with the remaining Parmesan cheese and parsley. Don’t forget bread for dunking. YUM.